There are a million sales email tips out there.

Woops, make that a billion.

But how many of them are data-driven? AKA: Tips you can trust.

If you want to book WAY more meetings with cold email…

Or if you want to rapidly accelerate deals in your pipeline…

Then these are the best data-backed email tips you’ll read all year.

TLDR: We analyzed more than 300k sales emails from B2B technology companies in North America to see what works and what doesn’t.

For the first five tips below, success was defined as booking a meeting within 10 days. We did not use response rate as a success metric.

The rest of our email tips point to trends we see in winning deals. They’ll help you for deals in flight.

Ok, onto the main event.

PS: Give your inbox an unfair (but totally legal) advantage and download The 7 Laws of Highly Effective Sales Emails.

I just told you the importance of data.

So what I’m about to tell you is going to feel counterintuitive.

It’s a HUGE mistake to include ROI language in your cold emails.

Because it leads to a 15% decrease in success rates:

What?! How could anyone argue with facts and data??

When it comes to ROI, even if prospects believe your numbers are true, they won’t necessarily find them persuasive enough to book a meeting with you.

You need to offer them context first, or no amount of data will feel meaningful.

Instead, describe the tangible problem your offering solves.

That will tap into their emotions, which is how they make decisions. That’s how the human brain is wired.

I’m not saying NEVER use ROI language. I’m just saying don’t use it in the cold email scenario.

Buyer’s make decisions based on their emotions (i.e., their context), then justify their decision with data like ROI. More on this in our previous post.

So instead of writing about ROI in your cold email, try this…

Email tip #2: Make it about THEM

Your product is great.

But prospects don’t care about either of those statements (at least, not yet).

Know what they DO care about? Themselves!

(This isn’t a knock, BTW. We’re all driven by self-interest.)

Specifically, they care about their business, their goals, and the challenges preventing them from reaching those goals.

Here’s how to make this a habit:

Don’t: I’m reaching out because I think our product will be a great fit and drive sales.

Do: Imagine if you knew every time there was a risk in your pipeline preventing you from winning deals – and you could react immediately, saving pipeline and increasing revenue.

If you find yourself listing features, pump the breaks.

And if you’re about to ask them for time, pull the emergency brake.

You’ve probably wondered which is a better CTA (call to action) — asking for time or asking whether a buyer is interested.

Wonder no more. We did the work for you.

The Interest CTA is the highest performing call to action for cold emails: 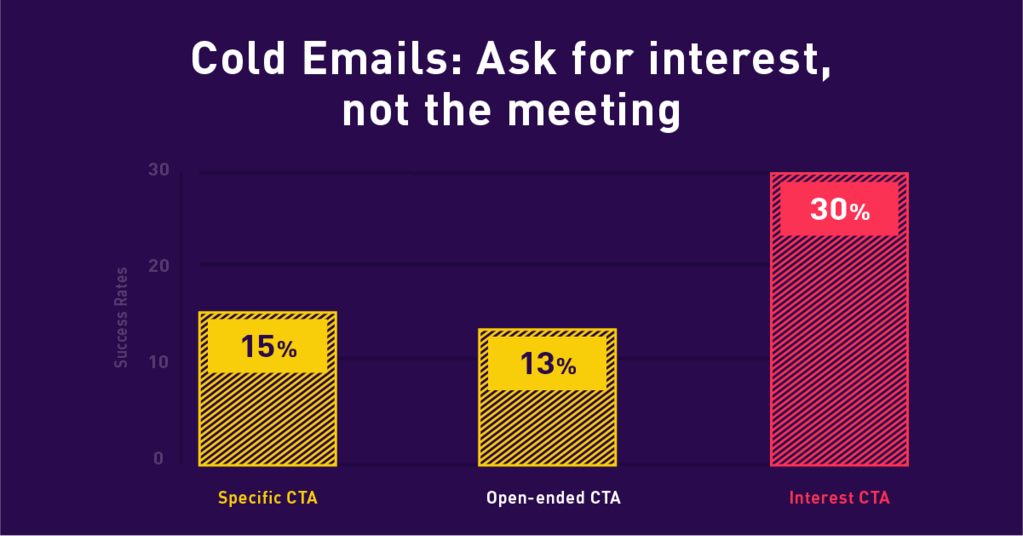 The interest CTA gauges interest, instead of asking for time.

This reflects a new and highly effective approach to prospecting: selling the conversation, not the meeting.

Time is a finite resource, and the decision makers you’re targeting are very aware of this. They wish they had more of it.

And they’re very reluctant to give it away, especially to a stranger (you).

Interest, however, is not perceived in the same way. It’s not finite, nor is it a resource. That’s why sellers have more success when they pique someone’s curiosity instead of asking for resources (like time) upfront.

Once you get their interest, then set the meeting.

A CRO friend tested this and saw BIG results:

Did you know that 85% of people with smartphones use them to access email?

Keep that in mind when you write sales emails. You have a very small amount of real estate in which to capture their attention and make your point.

Readers assess the amount of effort it’ll take to digest your message before they read a single word.

Most sellers try to say everything on the first email.

Instead, your goal is to capture interest and spark a conversation.

That means focusing on what matters most and being concise about it.

It takes an extra moment, because as Mark Twain said, “I didn’t have time to write you a short letter, so I wrote you a long one.”

But concise emails are worth it.

(Note: This is correlation not causation 🙅🏻‍♂️)

And it’s not just sales people using them.

Prospects use them twice as often:

So don’t be afraid to drop a little 🎉 into your emails once you start to get a sense of who you’re dealing with.

And if your buyer starts emoticon-ing you (that’s what it’s called, right?), then it might a a great sign.

Smily faces are fun and all, but email has a hidden super power that few sales pros know about…

Want to know the #1 signal that your deal is going to close?

Email velocity measures the number of emails exchanged between buyers and sellers.

It measures whether you’re really having a two-way conversation with buyers.

And it’s the best way to tell if a forecasted deal is on track to close: 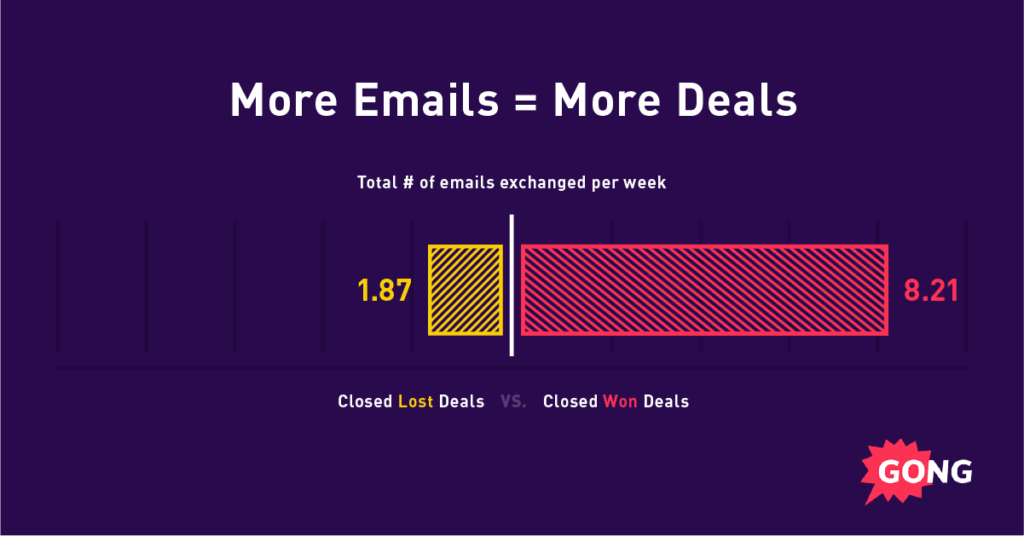 (Caution: Email velocity is NOT how many sales emails you send prospects.)

This is correlation, not causation.

But it is very clear that winning deals have this characteristic and losing deals don’t.

This metric is great year round, but it becomes Olympic-grade clutch when it’s end of month and you’re looking over your forecast asking, will it close?

When healthy deals zero-in on a signature, they move from ~8 emails to ~11.5 emails per week.

Keep an eye out for what’s heating up and what needs some TLC.

That’s how you get onto the podium.

Email tip #7: Use the Specific CTA to move deals forward

In tip #3, I told you to use interest to get attention in a cold email.

You should, but there’s a catch!

Stop using it the moment you enter the sales cycle. Once you’re there, asking for interest isn’t as effective as you’d think.

Know what’s effective now? The Specific CTA, where you ask for a meeting on a specific day and time:

At this point in the relationship, you know they’re interested so you need a direct approach that gets straight to the point.

Confirm a time and ship the calendar invite before your buyer gets distracted or changes their mind.

You want to move them to “invite accepted” as quickly and easily as possible.

The Specific CTA doesn’t leave room for uncertainty. It’s clear and direct, and that’s why it works.

Closers, this one’s for you. 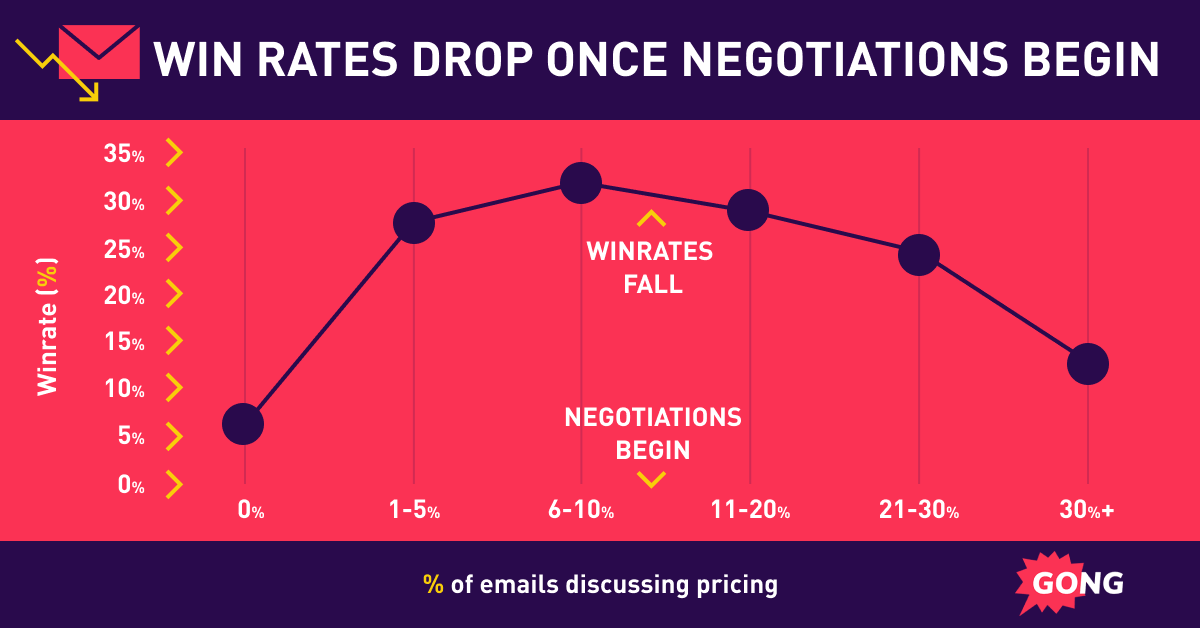 Here’s how you know the difference:

Once your buyer asks for anything, negotiation has begun.

It’s important that you recognize this signal because it shifts the conversation dynamic. When it happens, you should immediately get proactive by moving your conversation to phone or web conferencing.

Negotiating over email is a recipe for trouble.

Buyers can ghost you or stall you until the end of the month when you’re most desperate. Plus, it’s easier for them to play hardball over email.

Instead, make them speak to you directly.

As soon as you’re negotiating, move to where you can win — a phone call or web conference meeting.

If you’ve made it this far…

You clearly care about your success. Right on.

But this post isn’t enough to put you at the top of your class – not yet.

That’s where the The 7 Laws of Highly Effective Sales Emails come into play.

It has the tips you read today, PLUS a few bonus tips I didn’t include here.

These insights will fast-track your sales acumen.

Plus you’ll book WAY more meetings. (If you’re into that sorta thing.)