Improve rep performance, onboard new hires faster, and build a team of A-players with sales training software from Gong. Gong is a Revenue Intelligence platform that enables remote sales training and coaching. It analyzes your team’s call recordings with AI to understand what your sales team is doing right and what they could do better so you can win more deals. 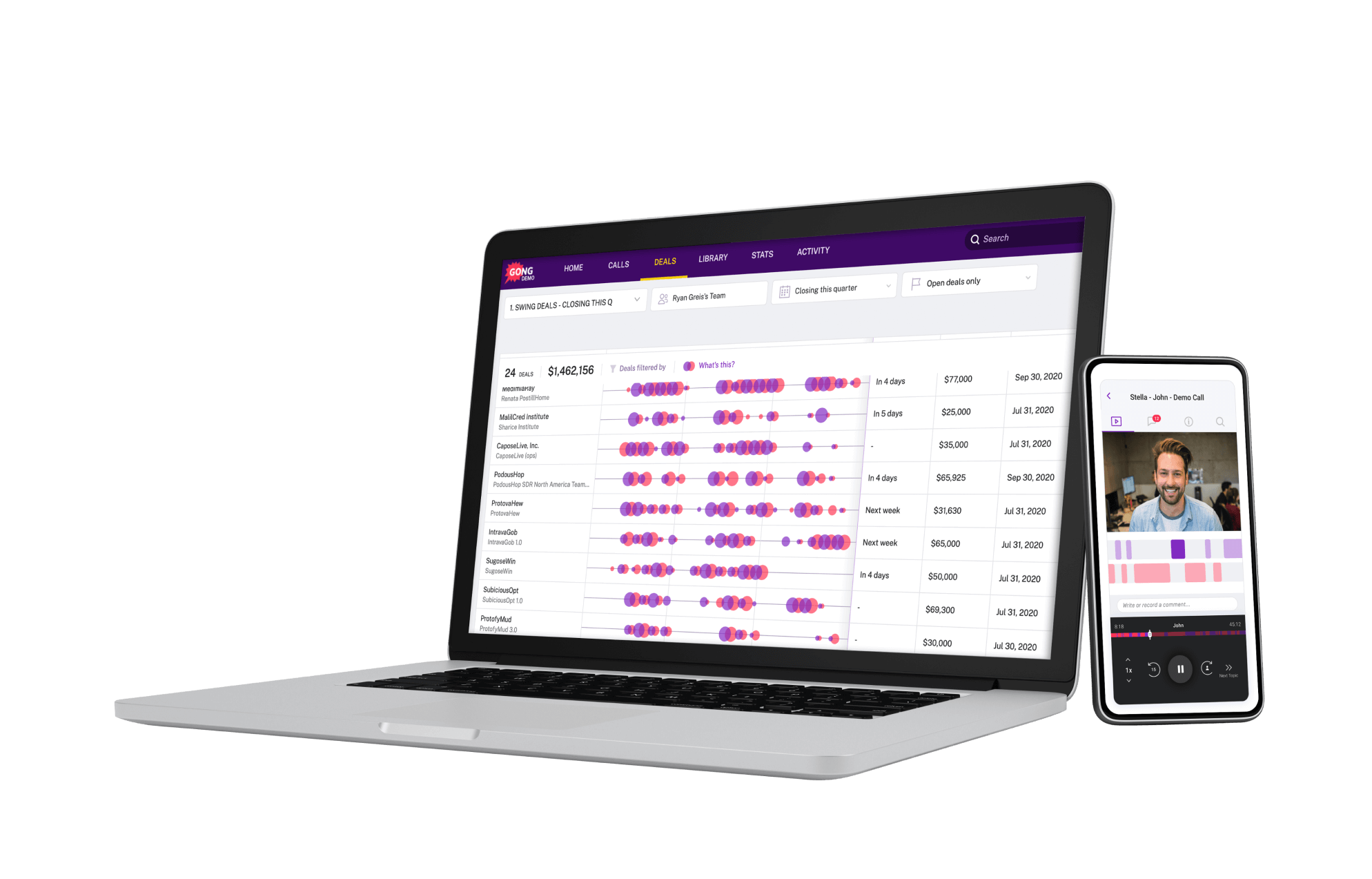 Why Pick Gong As Your Sales Coaching Tool?

Gong analyzes your sales team’s conversations with AI. It shows you what your best reps are doing, identifies areas of improvement for each rep, and allows you to track their progress week over week.

Gong also alerts you proactively of behaviors you want to monitor: Competitor mention? Pricing objection? New talk track adoption? With Gong, you have the tools to skyrocket rep success and win more deals.

Gong’s sales coaching software lets reps listen, learn, and replicate behavior from top reps in your organization. It gives them the opportunity to shadow every call from your A-players, then replicate their winning behaviors. Self-service sales training, anyone?

But don’t just take our word for it. Gong is rated #1 for call recording software on G2 Crowd by over 2,000 users.

But wait, there’s more! Gong is the #1 Revenue Intelligence platform. Unlike other sales coaching tools, Gong uses AI to give you total visibility into your team, your deals, and your market.

Revenue Intelligence is the new way of operating based on customer reality instead of opinions. Here’s what that means for you:

Understand what top performers are doing and replicate their winning playbook for your entire team.

Like a truth serum for your pipeline. See what’s really going on, so you can stop deals from going dark and keep them on a path to closed-won.

Gain insights into your market, straight from the mouth of customers. Win an unfair share of your market by selling what they are buying.

Gong opens a window into all the calls it records and analyzes for your teams, letting your coaches and managers provide relevant guidance without intruding on every call. Reps, managers, and coaches can review calls together, hearing exactly what was said without relying on anecdotes or memory. They can also review the call’s dynamics, how they conducted it (e.g., talk time, interactivity), call content, and what was discussed on the call. All of that will help them pinpoint issues that require coaching.

Here are some actions you can take to focus your coaching using Gong:

How does AI help me become a better coach?

It answers the unknowns. What do your top performers say, for example, on discovery talk tracks compared to their teammates who struggle to achieve quota? What do they do differently during negotiations?

Gong’s AI answers those questions for you. It ranks your team and analyzes their talk tracks, showing you significant differences between what your top performers and the rest of your team say. And it goes one (amazing) step further. It takes that information and gives you personalized coaching recommendations for each team member. It’s as simple as this:

Gong’s software also lets you build and manage targeted coaching plans. They’re going to help you track and measure the impact of your coaching, so you can scale what works.

We’re not talking about general plans and metrics that roll on for ages. These are focused coaching plans that focus on one or two topics or skills. You run each plan for three to six weeks, depending on its complexity, and by the end of it, you know exactly what works … and how well. Use that information to inform future initiatives and coaching strategies.

Want to focus on a particular skill, talk track, or behavior? Here’s how to put a coaching plan into place:

How do scorecards help deliver a unified coaching experience?

Scorecards are a great way to ensure that coaching is happening and that it’s standardized. Many teams do this already in the form of a scoring guide or document that outlines the criteria for successful prospecting, discovery, and demo calls. With Gong, you can bring that right into the platform, so your reps can score their own calls; team leads and managers can score them too.

This lets you standardize, scale, and most importantly, track the progress of new hires and other team members over time. You’ll know if new hires are fully ramped or if anyone is ready for a promotion onto a new team.

How does Gong encourage self-coaching?

Gong is different from other sales coaching tools. Here are actions your team members should take to make Gong part of their daily self-coaching routine:

How does sales training software fit into our coaching culture?

The most successful teams incorporate guided coaching as part of their scheduled team meetings, one-on-one sessions, and deal and pipeline reviews.

The key here is dedicating at least 15-20 minutes of each meeting to review specific, real-life deals and calls using Gong recordings. You don’t have to call this coaching. Just make it a regular part of meetings you already hold on a regular basis.

How can I build my team’s sales playbook using Gong?

Hear a great call that deserves attention in your next team meeting?  Or would it be a good demo to watch for onboarding? Make a library folder for it and keep it to reference later.

The library enables you to organize different types of calls in various library folders for quick and easy access.

5 Reasons Why You Should Use Sales Training Software

I asked our customers why they would recommend using Gong for sales training and coaching. Here’s what they had to say:

Sales coaching software can help you surface coaching opportunities in your reps’ day-to-day – without lifting a finger. Get alerts for noteworthy moments (objection handling, monologues, next steps) in real-time so you can course-correct, and reinforce healthy behaviors on your team.

Build a custom plan with each rep so they can improve their performance based on data from their actual sales conversations. Build a team of A-players with sales coaching software.

Reason #4 Find Out What Works

Replay the game tape and understand what top performers do differently and what good looks like for your team, so you can replicate it with other reps.

Yep, you read that right. Reps love Gong. They use sales coaching software to track their progress, learn from top performers on your team, and crush their quota.

Join thousands of revenue leaders turning the light on the goldmine of data in their customer interactions.

We Didn’t Ask Them To Say This

We didn’t ask them to say this, btw.

"Revenue Intelligence, as I understand it, is the ability for you to really get down to the real detail on what works and doesn't work from an individual sales rep, so that you can have a strong understanding and foundation. How do both build a repeatable business and a predictable one? And that's what everybody's looking for. That when they're thinking about hiring more and more salespeople is like, what do I get out of the next salesperson that I hire? And can I assure leadership and the board that we can continue to get that same level of results as 5x --10x the organization. And what Gong allows us to do is have a lot of confidence that what we're telling reps to do is actually proven in the actual conversation with customers." 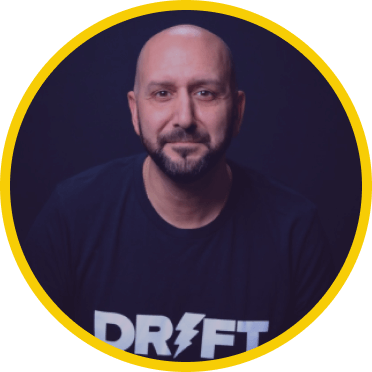 Thanks For The Kind Words

Gong is a super efficient call coaching tool. Whether you're reviewing senior reps or junior SDRs, this tool helps you dive into every call. Wouldn't recommend any call coaching solution other than Gong.
Support and coaching are very important to our success and Gong allows for the team, as well as leadership, to listen, learn and observe and to have a deeper insight into the health of our deals; in a way that would not be possible through traditional coaching methods.
The Talk ratio clarifies how long the prospect and the rep spoke for. You can use that feature to coach your team on bringing down the rep talk ratio and getting the prospect to talk more. This has helped me immensely in coaching my team - I have lots of material before I conduct feedback sessions with reps.