Having a bad quarter in sales almost always follow this pattern: Two “lazy” months followed by a frantic third month (characterized by a desperate scramble to get something (anything!) across the finish line).

At the beginning of a new quarter, you feel “fresh.” You’re glad the chaos of finishing the last quarter is over, and you can start with a clean slate.

But that mentality plants the seeds of yet another failed quarter.

With the knowledge that the deadline for quota is still three long months away, you coast.

It starts with taking it easy on yourself for just the first couple days of the quarter. Which extends itself through the first week. Then the first month. Before you know it, you wake up to the same nightmare as before: the clock is ticking as the quarter winds to an end, while you’re feeling like you have a noose around your neck, sinking to the bottom of the ocean.

If this sounds at all familiar, you’re not alone. And it could be the single pattern keeping you from attaining that elusive consistency in sales, as the following data will illustrate.

This Pattern of Procrastination Creates Inconsistency

The data science team at Gong.io analyzed 15 months of sales data, discovering that “average” performers in sales (characterized by being below the top 20% of performers) follow similar behavioral patterns throughout the quarter.

When it comes to the amount of scheduled sales calls average reps conduct, it seems that they follow a pattern of procrastination, skyrocketing the quantity of sales calls they perform in the last month of each quarter (compared to month one and two): 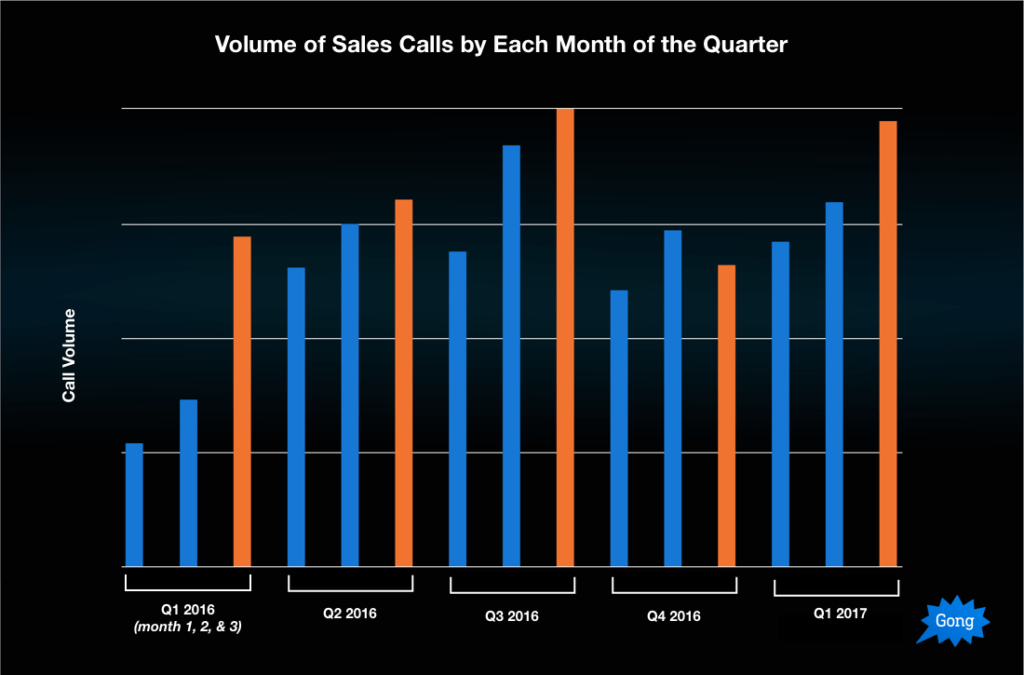 Notice that the only quarter with a 3rd month that contains fewer calls than earlier months is Q4 (December), which makes sense due to the volume of holiday and vacation activity that happens during that month in the U.S. (which is exclusively where this data set is pulled from).

This Desperate Scrambling Has a Low Success Rate

If you’re not yet convinced that this is a negative pattern, consider the success rate.

Despite “middle of the pack” reps inflating the amount of sales calls they schedule and hold at the end of each month, the success of those calls (measured by securing the next step/meeting) are actually lower than any other month (most of the time): 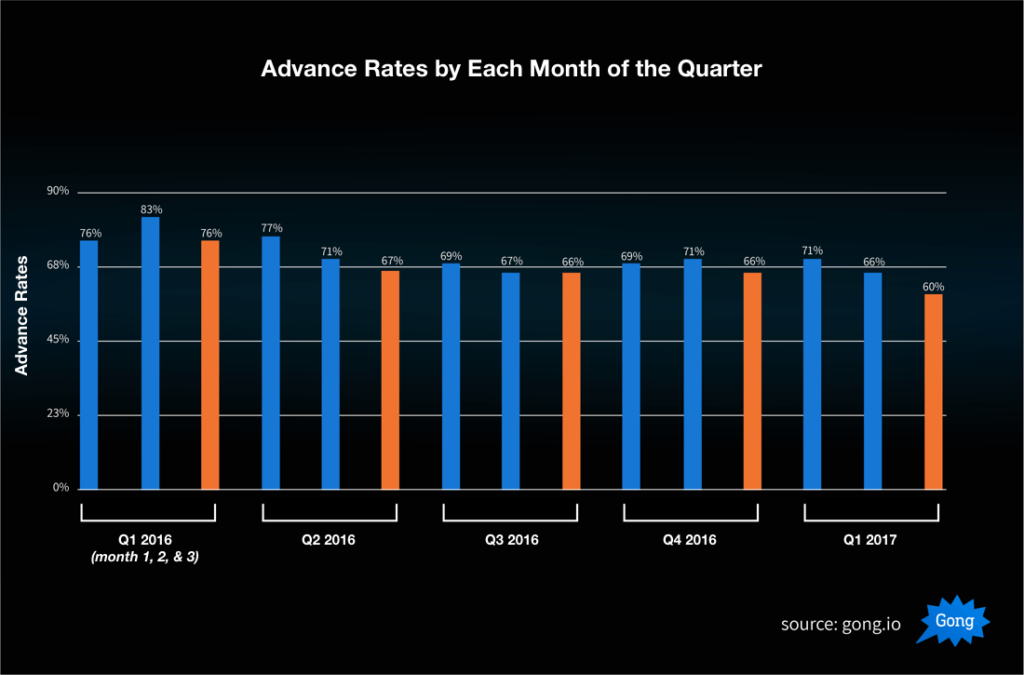 In other words, though their activity levels surge at the end of the month, the effectiveness of this chaotic level of activity drops.

Not a formula for consistent quota attainment.

What Do Reps Do During These Calls?

So far we’ve only discussed activity data (and its success rate).

What happens when we zoom into what’s actually happening on these calls?

Every call in this data set was recorded, transcribed, and analyzed using Gong’s conversation intelligence platform.

For the unfamiliar, this means we can identify which topics are being discussed on sales calls, and to what extent, using artificial intelligence (AI).

As expected, rep-initiated discount discussions skyrocket on the last month of each quarter, rising by nearly a third compared to the first and second months:

While the argument may be brought up that this practice helps them get some extra deals across the finish line, the previous chart seems to invalidate that, illustrating that despite the discount offers, the rate of securing the next step (including closing the deal) is relatively small.

What about Top Performing Reps?

This article outlines (from a bird’s eye view) what not to do if you want to attain consistency by analyzing what inconsistent reps do from a quarter-by-quarter basis.

This data will become much more actionable when we can compare it with what we should do.

In other words, how does this pattern change for top performers? How do they manage their quarters differently? That’s what we should strive to emulate. Comparing the two will allow the lesson to sink in much more deeply.

We’ll be releasing the “sister version” of this article next week on the Gong blog.

We’ll be doing the exact same analysis, but this time, we’ll analyze top performers (the top 20% of the sales force).

This will give you the contrast needed to pick apart how the best reps manage their quarters differently, so you can replicate their successful approach (and avoid the failed ones).

Check out the Gong Blog and enter your email. You’ll be first to be notified when Part II of this article comes out.