Don’t know where to start.

How do I even know it’s working?

Most coaches struggle with those worries.

That’s because most coaches aren’t taught how to be a great… well, coach.

As a result, they attempt to figure it out along the way.

I’m all for learning on your own, and lessons learned from experience are great.

But there’s a BIG problem if that’s your approach to coaching:

Not to mention, moving to virtual sales has thrown a huge wrench in your coaching plans. I mean, how do you coach what you can’t see (i.e., your bullpen)?

So what do you do in this situation?

You take advantage of a unique opportunity that no previous generation of sales leaders have had.

You use DATA to drive your coaching and decision making.

This post is your jumping off point for all three.

Your path to becoming a legendary sales coach in 2021 starts here.

Many people think of coaches as advice-givers.

Always telling you what to do, how to do it, then how to do it better (No! No! No! You’re doing it all wrong. Do it like THIS!).

This couldn’t be further from the truth.

They don’t yell answers at them, but instead, guide them toward self-realizations.

I know it’s tempting to jump in and tell your team how to do things “the right way.” (It’s definitely faster.)

But the problem with this is three-fold:

A better approach is asking leading questions instead of giving answers.

Next time, try a line of questioning that goes something like this:

What about the call didn’t go as planned?

Why do you think that is?

If you could go back and do it again, what would you do differently?

How are you going to ensure you do that next time?

When reps get to an answer largely on their own, it creates a sense of ownership. You’re not forcing them to do something, you’re helping them understand why they want to do something.

This co-ownership is how you get buy-in from your reps. They feel like they found the answers, even if it was with your help.

In your subsequent 1:1, revisit the same questions to hold your rep accountable and reinforce the importance of making these changes.

It’s about understanding the full picture of each deal — clarifying its trajectory and any upcoming hurdles that will (inevitably) get in the way.

Here’s the thing about deal risk: You have to find it before it finds you.

You can’t afford to burn three weeks of valuable time thinking a deal is on track, only to later find out that it’s actually been stalled… after you included it in your roll up.

When you stop focusing on one call or one stage, you see larger risks that affect the whole deal.

For example, our research shows that win rates plummet by 80% when deals are missing the decision maker: 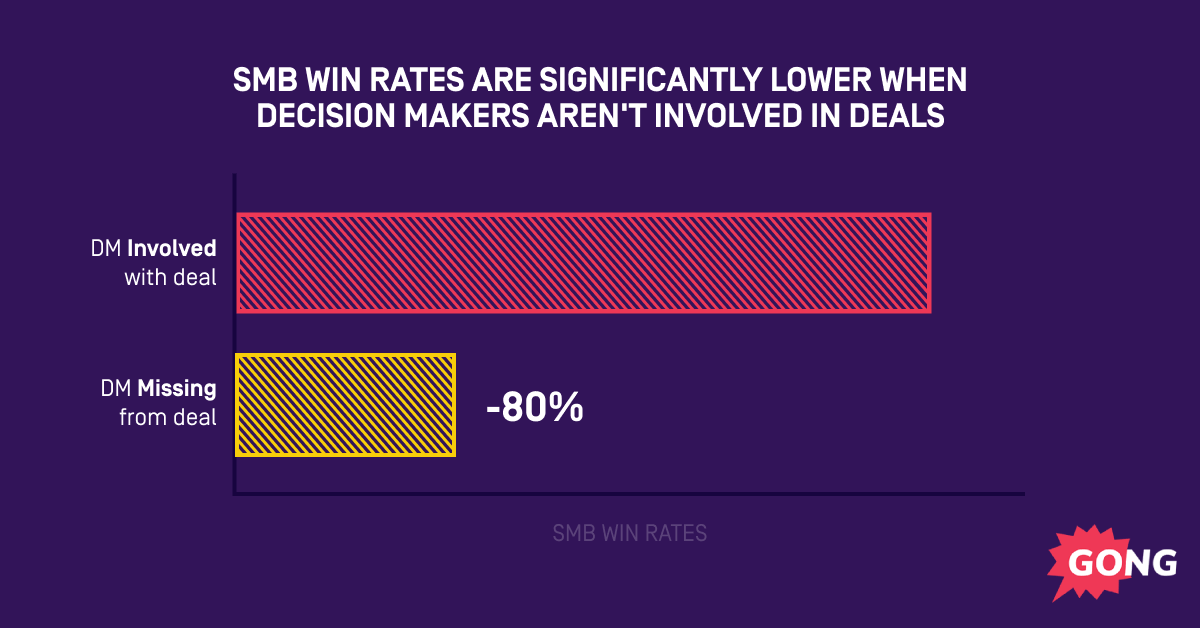 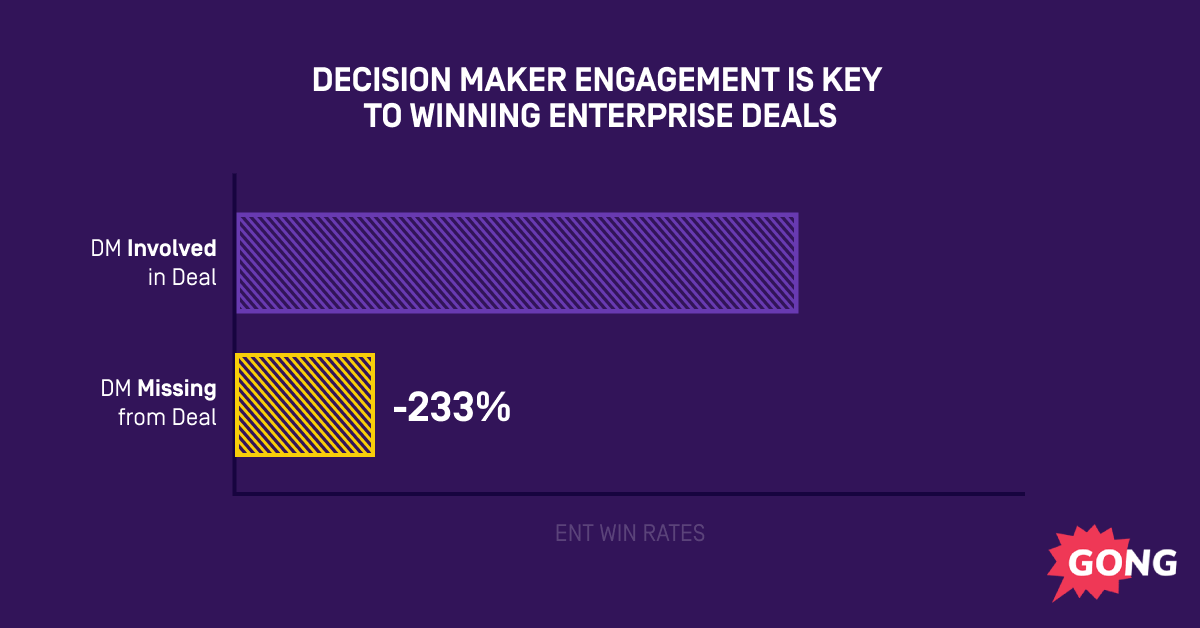 If you’re way down in the weeds dissecting the wording of one call, it’s possible you won’t ask questions that reveal an overarching risk that’s impacting both this deal AND your entire pipeline.

Reps lose deals because risks sneak up and bite them (and you!). But remember, those risks aren’t invisible, they’re just unseen.

PS: Step into your next coaching session with a game-winning playbook by downloading The Sales Coaching Template for High-Performing 1:1s for free. Whistle and clipboard not included.

Skills development: Get your team to watch game tape

Sure, listening to your recorded self can be cringe-y (or is that just me?).

But everyone on your team will get over it, quickly.

More often than not, what works best for your sales motion is stored in your reps’ heads. And it’s probably a lot of stuff they use instinctively, rather than on purpose. That’s especially true for your top reps.

But your job as a coach is to get what works out of their heads and share it with the rest of your team.

Because if that top rep leaves or gets promoted, that knowledge disappears with them.

Your winning playbook as a coach is to establish a call recording library. It’s user-generated content… a sales playbook that practically writes itself. You just decide which calls are “hall of fame” worthy.

Now you have a vault of gold that every rep can access at any time. It’s how you go from a team that barely makes the playoffs to being back-to-back champs. 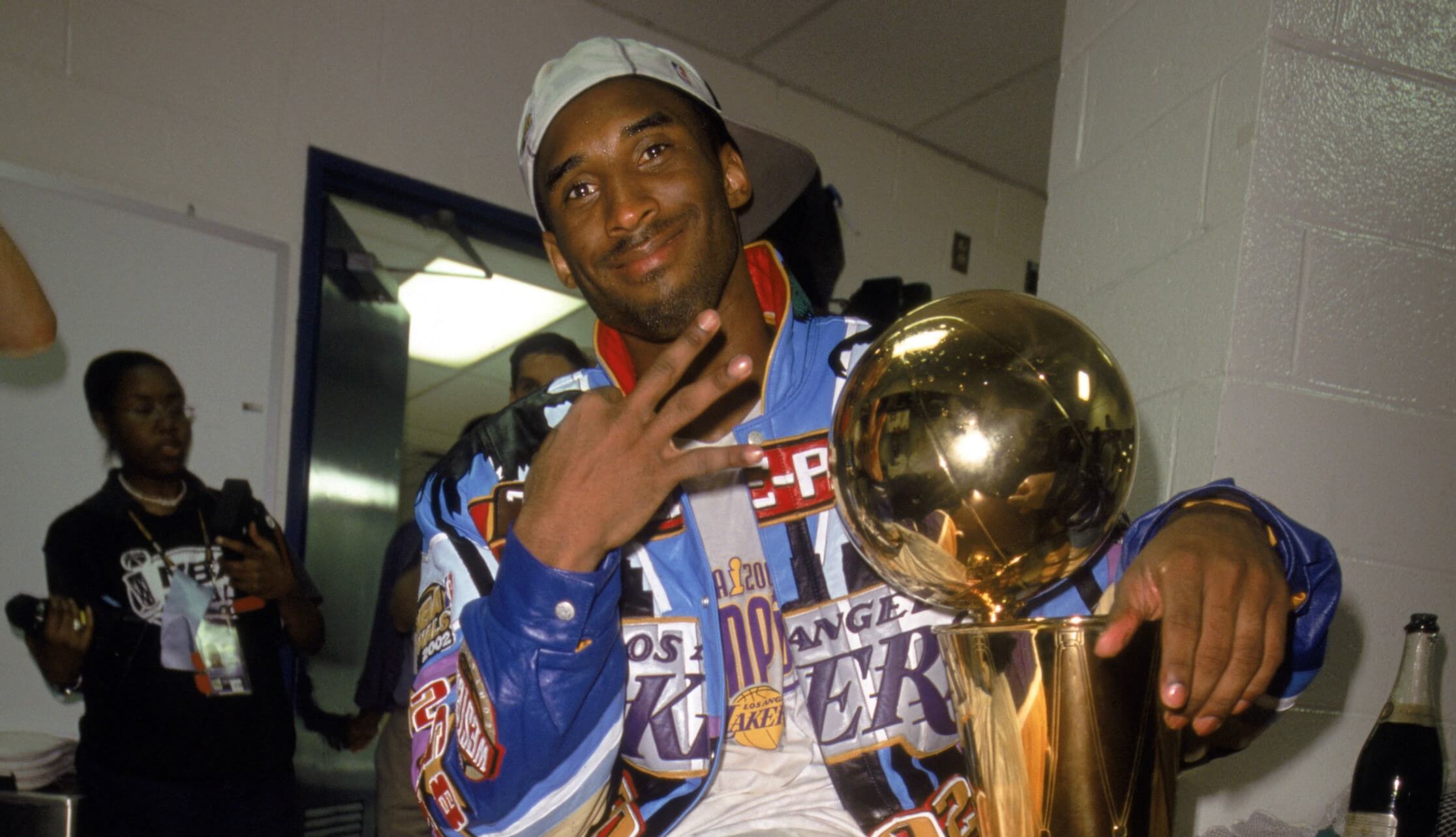 (Even if you don’t follow sports or love the Lakers, greatness is greatness).

2. It’s not okay to fail the same way twice.

“You can never make the same mistake twice because the second time you make it, it’s not a mistake, it’s a choice.” ― Steven Denn

Recorded calls prevent teams from making the same mistakes over and over.

When you track all your team’s calls, you can prove that certain tactics work… and that certain ones don’t. You can have every rep to listen to game tape of the best examples for each sales motion so they don’t repeat tactics that don’t get them anywhere.

For example, we KNOW that feature dumping (i.e., talking about features instead of product value) crashes your sales numbers: 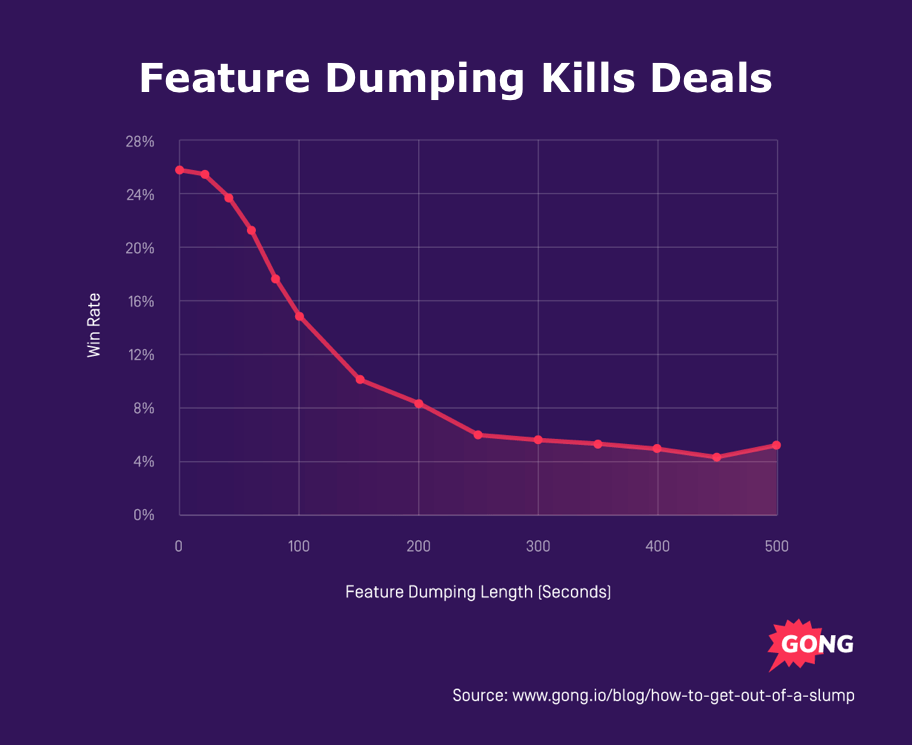 And it’s easy enough to tell them not to do it.

But if you really want them to stop doing it, get them to listen to game tape of how to talk about value instead. Because it might not be obvious to them until they see (or, hear) what they’re doing.

It doesn’t matter if your sales team is virtual, remote, hybrid or some other phrase. Get them into game tape recordings. It’s a massive boost to your coaching playbook. (Full disclosure, Gong can help. But even using something as simple as Zoom recordings is better than nothing.)

Good reps need it, great reps want it, and ALL reps expect it.

(Even tenured reps, it just takes a different form.)

They like getting better both for the intrinsic value of self-improvement and to make more moolah. It’s not rocket science.

You notice one of your reps has a bunch of deals stuck in the demo stage.

You ask them why they think that is. They say they don’t know. (If they did, they’d fix it!)

So you join a couple of upcoming demos to see for yourself.

Problem is, you can’t find any obvious patterns.

Plus, the dynamic of the call changes once you’re in the room, so your rep behaves differently than normal.

You’re left making educated guesses. (And your guesses aren’t as educated as you think!)

Was it their tone? Or how they told customer stories? Or maybe they spent too much time on integrations instead of your differentiators?

Imagine having a dashboard that detects deal risk and flags which behavior you should coach: 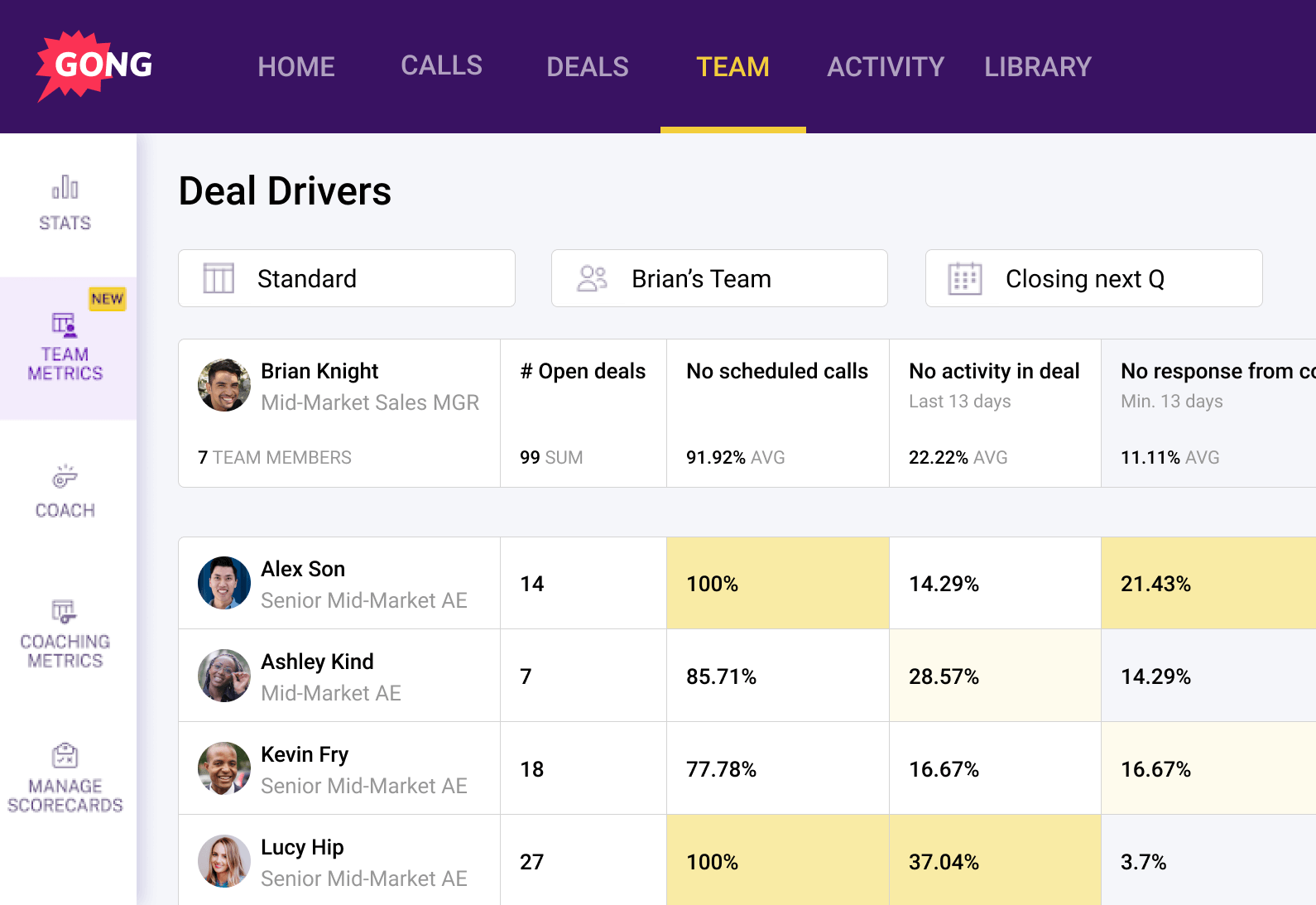 It’s a reliable way to make your coaching relevant and evidence-based.

(Psssst: Want to add visibility to your pipeline? Huddle up with our team. You’ll be amazed by what “a little data” can do.)

Strategic guidance: Cut the game of catch up

How many of your 1:1s and pipeline reviews include these questions?

Who are you talking to?

What did you talk about?

What’s the next step?

Every moment spent getting caught up on deals is time not spent on what your reps really need — strategic guidance. That’s where you’re most valuable as a leader.

Find out the answers before your 1:1s, so you don’t waste any time during meetings.

Data (via Revenue Intelligence) answers these types of questions in seconds with insights that are easy to filter and understand:

Go into your 1:1s knowing where the deal has been, so you spend time making sure the rep knows how to move it forward from there. (A mix of coaching and self-realization is perfect here.)

A big mistake for sales leaders is thinking all the coaching falls on their shoulders.

Remember you’re a leader, not a super-rep.

This assignment isn’t all on you, coach. Your entire team can help out.

Create a culture of coaching across your team. This might sound like a high-level, fuzzy objective. So let’s quickly break down how in more concrete terms.

Reserve your experience and guidance for when you’re the only person who can deliver the lesson (using this sales coaching template, for example).

A large portion of coaching moments can happen through osmosis. In other words, your reps can learn how to improve simply by hearing other reps on your team.

Manager-to-rep coaching is limited to the time you have available — it’s live or nothing at all (unless you use Gong, of course).

We’ve already talked about giving reps the ability to learn on their own at any time using call libraries. That approach is especially great for new reps who you want to ramp quickly.

How it started: Call shadowing that took weeks and wasn’t even in the right order.

But you should also consider having your team chime in before you offer solutions during pipeline reviews. It gives them a chance to act as peer coaches to a whole group.

And depending on how experienced your A-team is, you might even designate a team coach or two — people with proven track records who want to practice their leadership skills. This approach makes it easy to build a business case for promoting these aspiring sales leaders.

When reps learn to trust each other as well as you? Well. You’ve got a fully engaged team that’s coaching on all cylinders.

Get off the sidelines

If you’ve read this far, you’re already in the running for Coach of the Year.

Great coaching starts in your next 1:1 with reps. It’s THE time to put these tactics into practice.

There’s a big revenue target in front of you (isn’t there always?), and getting there isn’t about doing more, it’s about being better.

The tips from this post are a great start, but there’s a lot more to becoming a phenomenal coach.

Works great is you’re a sales leader, aspiring leader, or an IC looking to level-up your next 1:1.