“Can I pencil you in for next week?”

I was wrapping up a sales meeting with a new account.

Even though they seemed interested, they were hurrying to get off the call.

They all had other meetings to get to, and I was holding them up.

“Send me an invite for Tuesday afternoon.”

That short moment haunted me for seven months.

Although the deal eventually closed, it was a slog of a sales cycle.

So what went wrong?

The answer is more complicated than just one thing.

But, it turns out, there is a “key moment” during your first meeting that strongly impacts how short or long your sales cycle turns out.

And if you get it wrong, your deal is at a high risk of “going dark.”

The team at Gong.io analyzed the factors that lead to a short sales cycle.

They analyzed recorded sales meetings from 28,833 closed deals that were executed over web conferencing platforms.

Every call was transcribed and analyzed with AI to isolate the seller and buyer behaviors that correlate most strongly with a short sales cycle.

The team focused on deals in the top 20% in terms of velocity and compared them with average and slow sales cycles.

Here’s what we learned.

This “Moment of Truth” Dictates Your Sales Cycle

The fastest-closing deals have one major thing in common: Securing “next steps” played a major role in having a short sales cycle.

Take a look at the below image of an analyzed sales call.

It illustrates how the AI can identify discrete topics of discussion throughout a sales call.

Including the topic of “Next Steps.”

In the fastest deals, the seller spent a whopping 53% more time discussing “next steps” during the first meeting in the sales process than deals with a slow sales cycle.

Before you brush that aside as seeming obvious, know this:

Spending a good deal of time discussing next steps only matters this imperatively on your first meeting.

The duration of time spent discussing next steps in later calls in the sales cycle has no impact on sales cycle length.

(So long as it happens. But the time duration has no impact).

Here’s Why: Buyers Aren’t Committed to the Sales Cycle (Yet)

Why does defining next steps in the first meeting matter so much more than in other sales meetings in the sales cycle?

Because buyers don’t yet consider themselves to be actively engaged in a sales cycle (even though we sellers think they do).

No. The purpose of the first meeting for a buyer is to evaluate whether or not they want to commit to a sales cycle to begin with.

It’s a subtle difference with a big implication:

The buyer has not yet mentally worked through potential next steps.

Purchasing your solution is not yet an “open project” in their minds.

They’re simply evaluating whether or not they should start the sales cycle journey.

That’s why discussing next steps at length during this “moment of truth” is so incredibly important.

Sorting through next steps with your buyer early on is the easiest way to reframe the discussion in their mind — it moves them into an active sales cycle and buying process.

But first, what is a sales cycle? Learn more here.

Buyers Are In a Sales Cycle “Chasm” At This Stage

At the end of your first sales call, assuming it goes well, buyers are in a mental “chasm,” sometimes riddled with indecision.

Mentally, they are transitioning from “not in a sales cycle” to “engaged in an active sales cycle.”

That’s is a big mental leap. I call it the “buying chasm.”

If you leave them hanging in that chasm, your deal has a high chance of “going dark.”

What bridges buyers over this mental hurdle is to agree to a concrete, meaningful, and purposeful next step.

That’s where I made a mistake in the story I told at the beginning of this post.

Even though I had checked the box of “securing a next step,” it had no meaning or purpose behind it. We simply scheduled (pointless) time on the calendar.

As a result, the buyer cancelled, and we played the rescheduling game for several weeks, painfully delaying the sales cycle length.

If you want a short sales cycle, you have to spend time setting and clarifying your next steps at the end of your first sales call.

Think of it as a mini-project planning session with the buyer that starts to bring the deal to life, shortening your sales cycle.

Once a simple series of next steps, actions, or tasks become defined in the buyer’s mind, the deal moves from idea to project.

The best sellers don’t leave that planning session to chance.

Understanding the importance of next steps is one thing.

Actually securing them is another.

Here are two tips to get you started.

After initial greetings and small talk, kick off your meeting by asking for their agreement to either discuss next steps, or “go your separate ways” at the end of the call.

“By the end of this call, I’d like you to be in a position where you’re either interested and we plan the next logical step, or you’re not interested, you tell me that candidly, and we avoid wasting each other’s time. Is that fair?”

Few people will say no to that.

You’ve just removed the gray area from the end of your meeting.

More importantly, you’ve gotten their commitment to think through the next step together (provided the call goes well).

Come prepared with specific suggestions for what the next step should be.

Selling is an act of leadership.

If you constantly rely on your buyers to suggest next step, my guess is that you have a few more deals that have “gone dark” in your pipeline than you’d like.

Spend five minutes before your first sales meeting writing down two or three meaningful, purposeful, and concrete next steps.

Here are a few examples to get you thinking about next steps that will make for a short sales cycle.

The right move will depend on your unique sales cycle.

(“Touching base next week” doesn’t count).

Then at the end of your call, try saying this:

“I have some ideas about what a next step could look like. But I’d love to hear your thoughts first.”

This puts you in a leadership position while still allowing your buyer to feel like they’re in control of their buying process.

If they have nothing in mind, go ahead and make your suggestion.

Are Your Reps Solidifying Next Steps?

Locking down next steps thoroughly during the first meeting is a simple way to shorten your sales cycle.

In our research, we discovered that in 26% of introductory sales meetings, salespeople do not even touch on next steps: 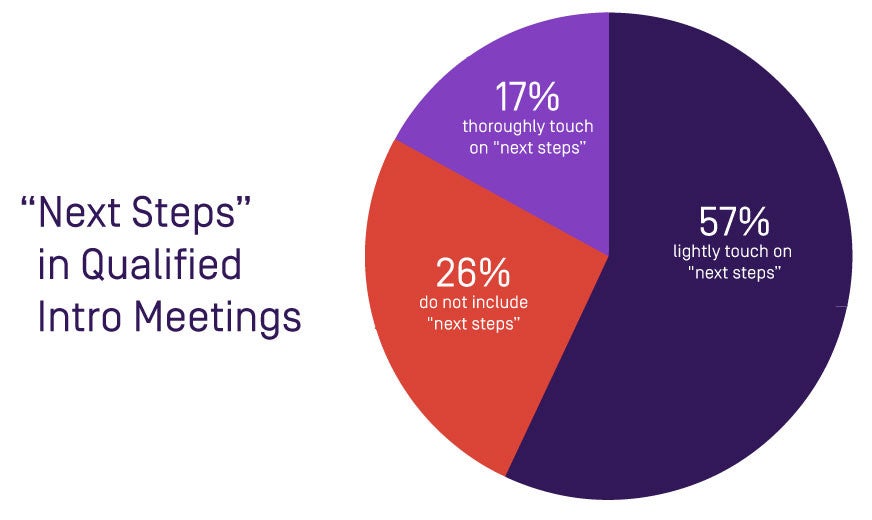 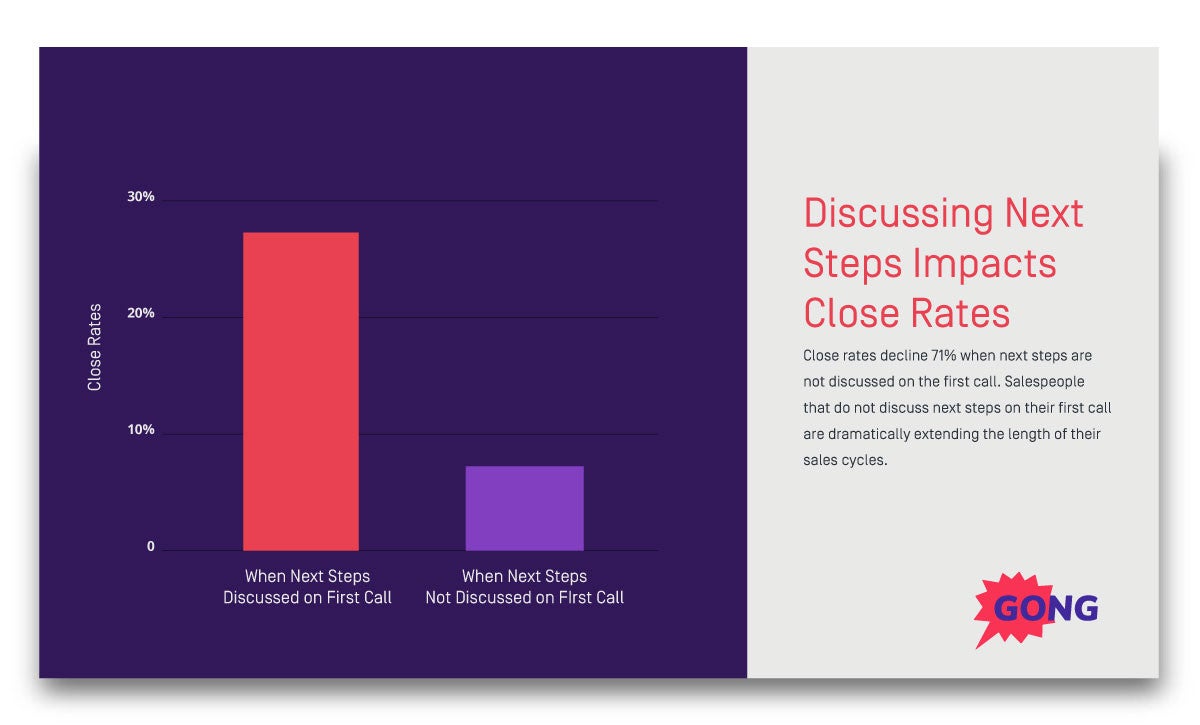 The salespeople making those calls are dramatically extending the length of their sales cycle and leaving deals on the table.

Sales leaders: How do you think your sales team stacks up compared to that stat?

Take Gong.io for a spin. No charge.