Many salespeople swear this is one of the best cold call opening lines:

At one point, they were right to think so.

Here’s the theory behind it:

It makes them feel in control.

It opens the door to a successful cold call.

Unfortunately, according to recent data, it no longer works.

Even if it once did.

That’s the nature of cold calling opening lines — they have a shelf life.

Three weeks ago, we published:

Cold Calling Is Dead, Unless You Follow These Rules.

It’s based on what we learned from dissecting 90,380 cold calls.

The calls were captured and analyzed with artificial intelligence (AI) to identify what cold calling behaviors correlate with success.

We didn’t address cold call opening lines in that post, so, we’ll cover them here … what works, what doesn’t, and a few surprising twists.

While we can’t cover every cold calling opening line under the sun (yet…), we did manage to shine the light on a few common ones.

We’ll reveal the #1 opening line to use in your cold calls (from our dataset).

Did I catch you at a bad time?

Compared to the baseline, using “Did I catch you at a bad time” to open a cold call makes you 40% less likely to book a meeting: 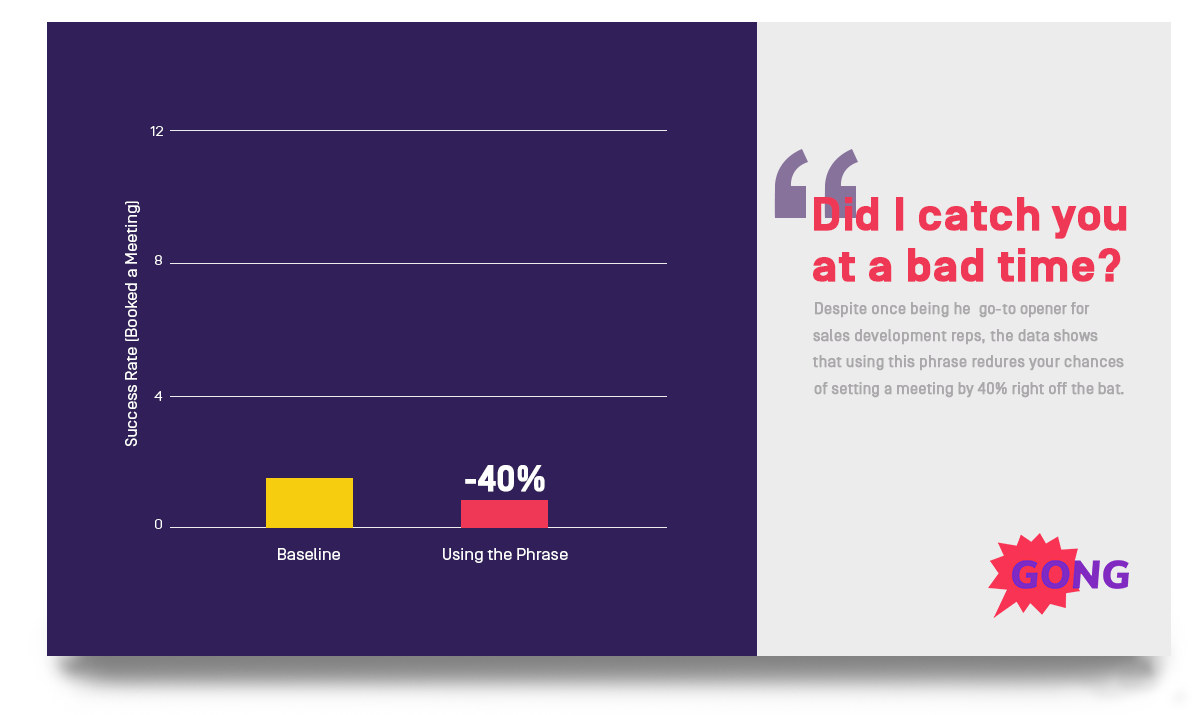 Cold calls that opened with this line had a dismal 0.9% success rate (compared to the 1.5% baseline).

I must admit, I used this question all the time when I was an SDR.

I read a few books that recommended it and stuck with it.

In hindsight, I don’t remember many of those calls going very well.

Like I said, in theory, the line sounds good.

In practice, it does not.

Many sales pros get heated over this simple phrase.

They just hate it.

But their hate is unwarranted.

Opening your cold calls with some version of “How are you?” correlates with a 3.4X higher likelihood of booking the meeting compared to the baseline: 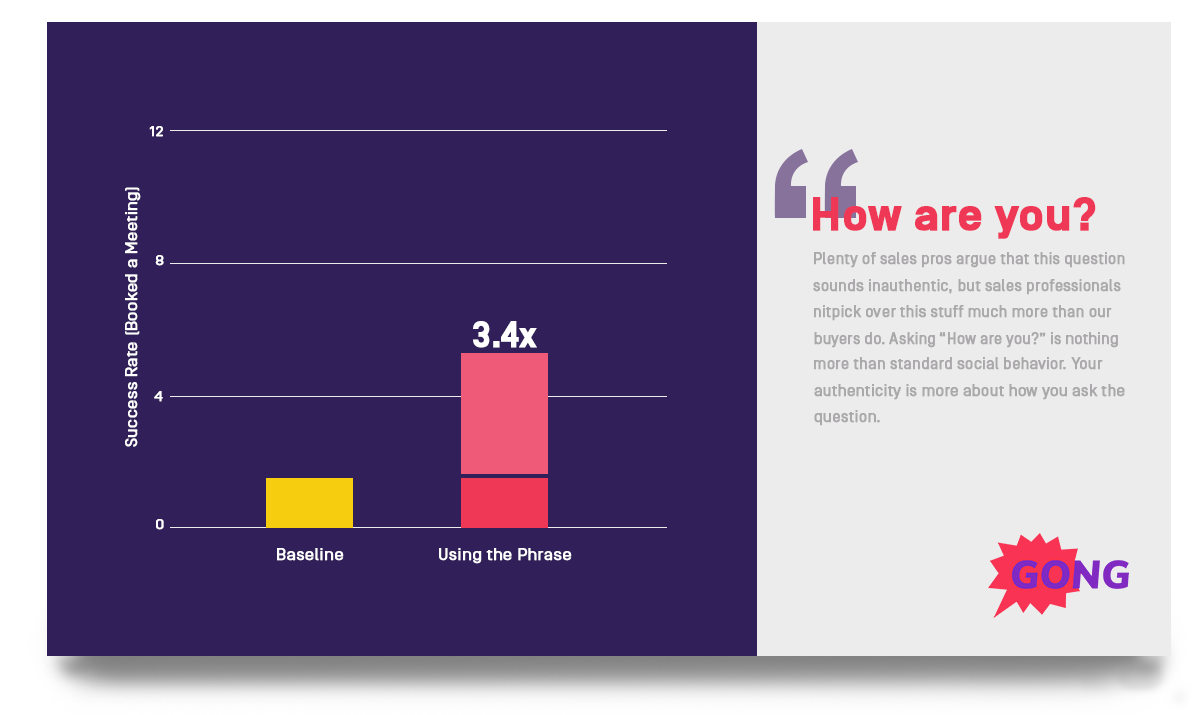 Cold calls that opened with this line had a 5.2% success rate, compared with the 1.5% baseline.

Plenty of sales pros argue that this question sounds inauthentic.

When they receive cold calls that use it, their skin crawls.

But we sales professionals nitpick over this stuff much more than our buyers do.

If you’re calling a sales professional, they may be critical of you for using that line.

But CFOs? CTOs? VPs of Operations?

It’s likely they won’t even think twice about it.

Asking “How are you?” is nothing more than standard social behavior.

Your authenticity is more about how you ask the question.

Are you giddy, robotic, or scripted?

Or do you come across as someone with baseline social intelligence?

The reason for my call is…

John Barrows was right about this one.

Beginning with a proactive reason for your call increases your success rate by 2.1X: Humans crave reasons, even if they’re not particularly strong reasons.

They just need something.

(There’s fascinating research behind this, BTW.)

Using this cold calling opening line early and often with this phrase puts the buyer’s mind to rest.

Of course, this line is not exclusive to the others.

You can pair it with an opening question — if you like.

Think of it more as a “given” on your cold calls, pairing it with other tactics to boost your success rates.

Now for the winner.

In our dataset of 90,380 cold calls, one opening line stood head and shoulders above the rest:

“How have you been?”

It came in at 6.6X higher success rate than the baseline (!) 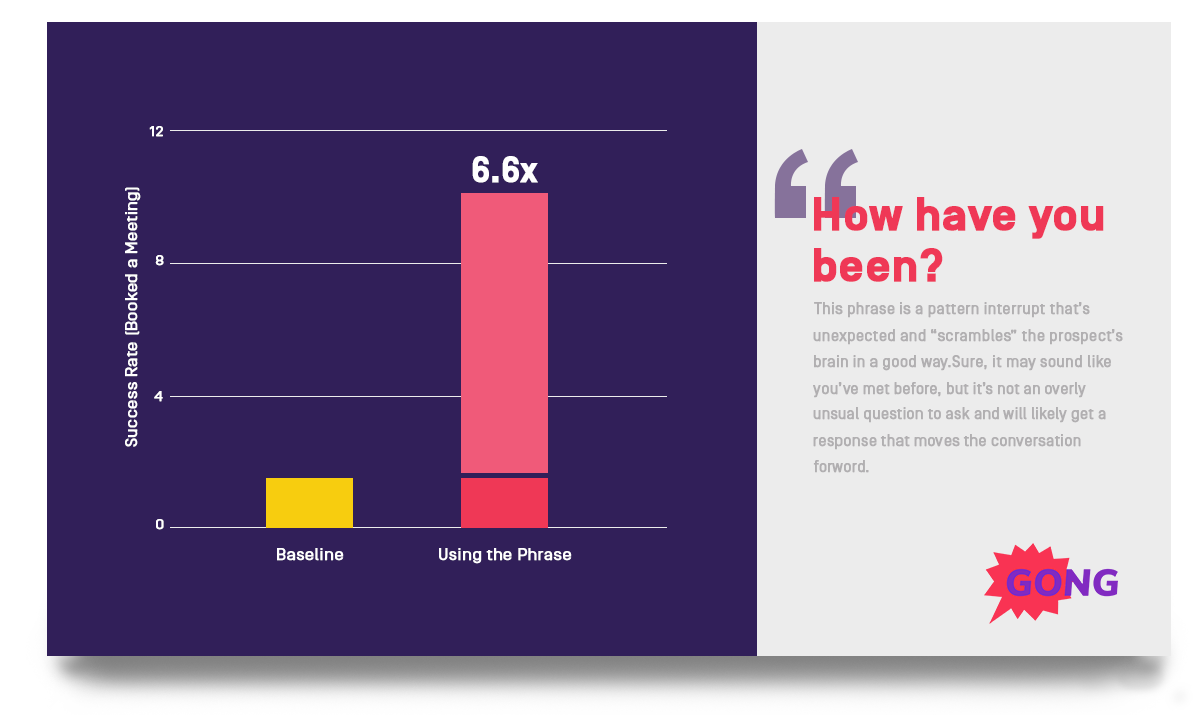 Cold calls that opened with this question boasted a 10.01% success rate compared to the 1.5% baseline.

I know what you’re thinking.

The success rate was high because they’d had a previous interaction.

So, why does this question work so well?

It “scrambles” the prospect’s brain in a good way.

You might be thinking, “What if I’ve never talked to the person before?”

You can plausibly ask that question to a perfect stranger.

But it’s not automatically implied.

We created a printable script using the key cold calling tips from our research.

Take a look, and download the cold calling scripts here:

Download it, print it out, and tape it to your wall for everyone to learn from.

If you liked this article you may also be interested in