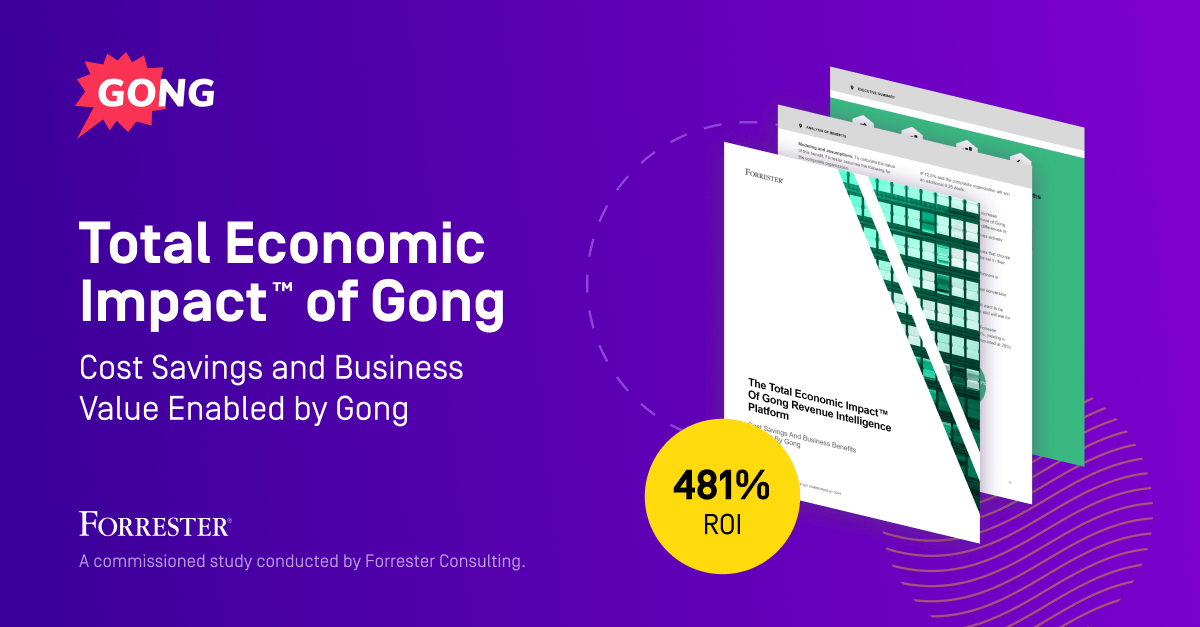 According to Forrester, selling has changed: “68% of buyers prefer to gather information on their own, and 60 percent prefer not to interact with a salesperson at all. Because buyers are further along in the buying journey, sales teams need to capitalize on every customer conversation and need to harness accurate, timely, and actionable customer insights to drive revenue.”

The challenge is that, until recently, sales tools haven’t been keeping up.

For this just-released study, Forrester interviewed executives at several companies – and conducted a financial analysis covering what happened before and after using Gong’s platform. Forrester then used the information to create a composite organization to quantify results. The composite organization, based on Forrester’s Total Economic Impact™ framework, is representative of the companies Forrester interviewed and modelled as a U.S.-headquartered B2B software-as-a-service company with annual revenues of $800M, an average deal size of $20,000, and 750 people in the sales organization.

Forrester found that before using Gong, sales representatives at the companies it surveyed, “relied on their email inbox and memory to discuss pipeline and deals with their managers, along with ad hoc stories developed to create supposed insights into buyers’ behaviors.”

After using Gong, Forrester found positive quantifiable differences: “The customer interviews and financial analysis found that a composite organization experiences benefits of $12.1M over three years versus costs of $2M, resulting in a net present value (NPV) of $10M and an ROI of 481%.”

The $12.1M in benefits derived from using the Gong platform were attributed to:

Additional benefits of using Gong reported by companies in the study but not quantified, included: reduced talent attrition, improved alignment between sales and marketing teams, and increased transparency around performance goals.

“(Gong) brings precision, visibility, and actionable next steps into the deal process, enabling organizations to increase win rates and work more efficiently,” according to the study. Customers recognized “the anatomy of a good deal for their organization. Gong’s proprietary artificial intelligence (AI) warned when something unhealthy showed up so the customers’ sales representatives could intervene.”

This latest study builds on a 2020 Gong-commissioned Forrester Consulting study, “Navigate the Future of Selling with Revenue Intelligence,” that found companies using revenue intelligence tools to supplement traditional CRM software were more than twice as likely to significantly over-perform their sales goals compared to companies that didn’t.

On the heels of a $200M funding round in August 2020, Gong experiences significant growth as digital transformation continues to accelerate during remote work

Palo Alto, CALIFORNIA, March 31, 2021  – Gong, the revenue intelligence platform leveraging artificial intelligence to transform revenue teams, today announced that TrustRadius has recognized Gong with multiple 2021 Top Rated Awards. Gong has won in three categories including Sales Coaching, Sales Enablement, and Call Recording. With a trScore of 9.3 out of 10 and […]

Watch a short demo and see the magic for yourself!