Pipeline management is no easy task.

Top managers are skeptical at every step of the sales cycle.

It’s in their nature.

It’s what makes them great at identifying risk in their pipeline and creating a contingency plan for each deal.

And for good reason: they know that when it comes to pipeline, you’re often dealing less with facts and more with opinion (see here).

What are the biggest deal risks to look out for?

Gong analyzed thousands of opportunities and uncovered the 3 deal warnings preventing you from closing revenue.

These 3 are the most common deal hurdles that aren’t invisible – just unseen.

Once you see them, you can’t unsee them. Better yet, you can take action towards generating a highly effective sales machine.

Here’s how to track, counter, and neutralize these top 3 deal risks:

You need to sell to power.

But really, how important is it that a DM is part of the deal?

Gong labs data shows that deals are 80% less likely to close without a decision-maker directly involved in meetings. 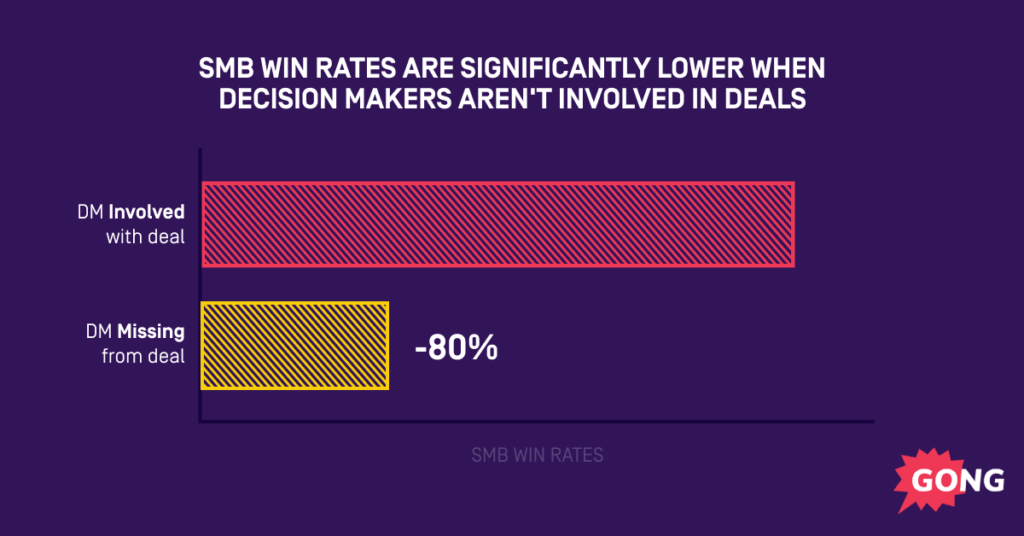 And it gets worse: 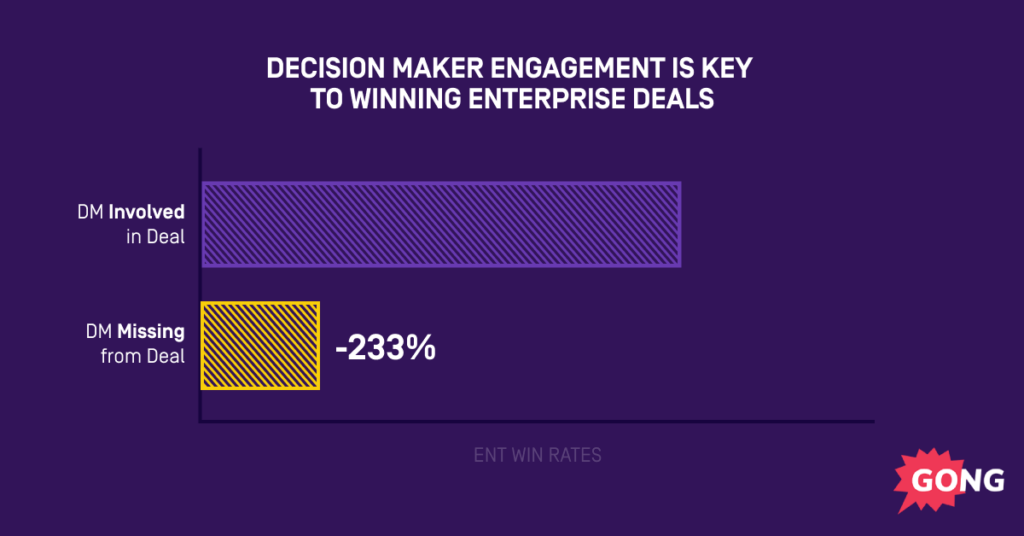 That’s what we call a data cliff — a huge drop-off.

Enterprise deals sans DMs? They live at the bottom of the canyon. Dead.

Before you insist a DM is on every single one of your sales calls (unlikely), let’s go back to the data.

For both SMB and enterprise deals, DM involvement has a diminishing return: Deal fatigue. The decision-maker feels like they’ve invested too much time — they are putting in more than they believe they will get out of the deal. 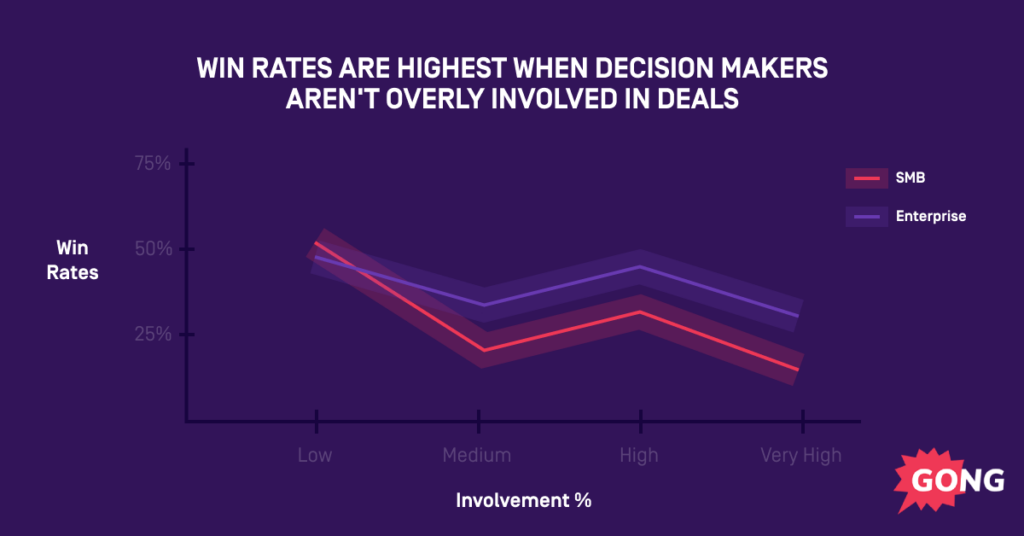 The ROI, if you will, is not positive.

You don’t need a DM to run the whole deal. The data show win rates are at their peak when they play the role of the approver (person who has the final say) as opposed to the evaluator (person who assesses the purchase from an operational perspective).

TL;DR: Ensuring a DM is involved in your deal is crucial for success, but don’t overcomplicate things (and risk decision-makers going dark) by trying to get them involved in every meeting. Include DMs in one or two conversations about what matters most to them.

If you’ve been in sales longer than a minute (you’re here, so you have) this has happened to you:

You are speaking with a single person throughout the deal — things (seem) to be going well. And then, darkness. You’ve been ghosted.

It’s time to grab the shovel and start digging. This deal is gonzo. Dead. Done. Over. Put a fork in it. Nail in the coffin.

Instead, to ensure a deal has a greater success in closing, you must be multi-threaded.

Multi-threading means building relationships with multiple stakeholders within your deal. It’s an approach that top salespeople use in every deal to build momentum and strengthen their influence when they’re not around.

Think of it like taking out life insurance, but for your deals.

It turns out the data is pretty straightforward: On average, winning deals have at least 3 people from the buyer’s side included in meetings across the sales cycle while losing deals often struggle to get more than one point of contact to attend their meetings. 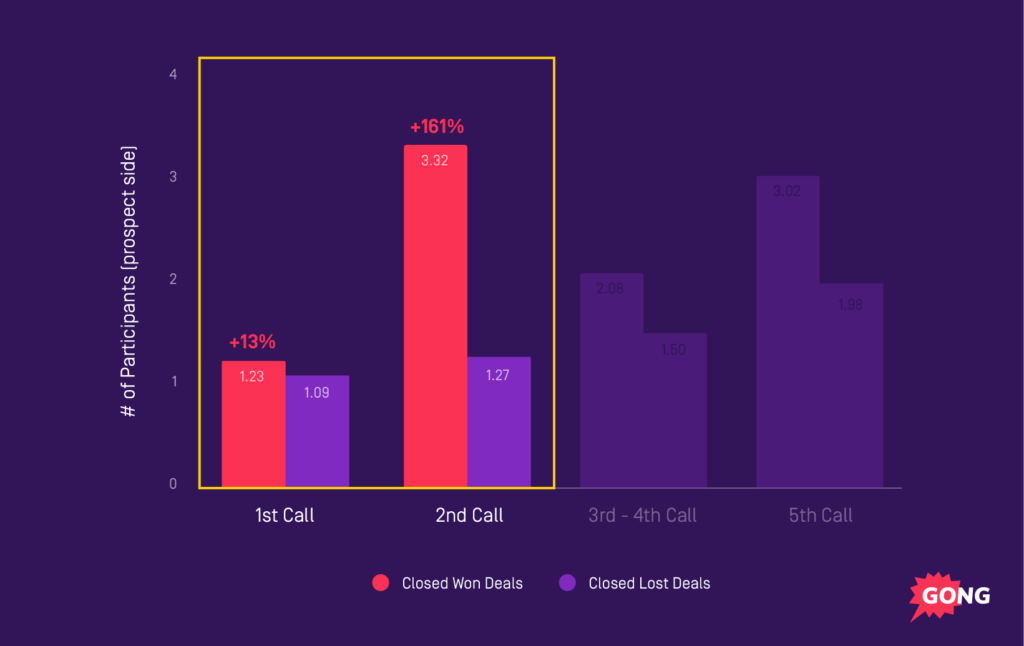 One more thing to note from the data:

While most deals start the same way — one point of contact on the first call – it’s the second call that tips the scales.

The number of participants from the buyer’s side for the second meeting almost triples in winning deals.

This early spike in (multi-threaded) engagement is a defining characteristic of successful deals.

Even better? The sales reps who go the multithread route are also more likely to engage in group calls — another factor in boosting win rates. 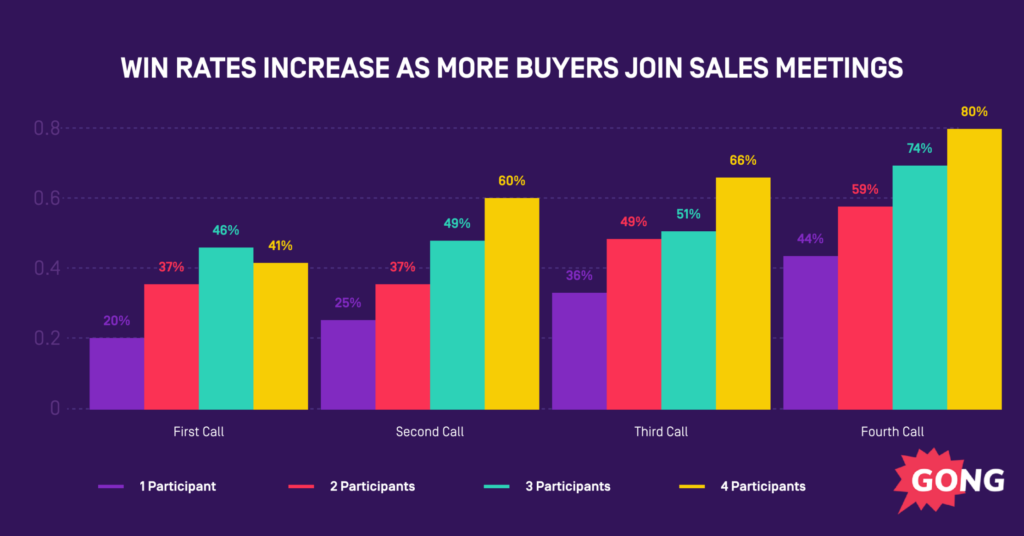 The downside to win rates when adding more participants to your meetings? ZERO.

No matter when the call happens, no matter the number of additional people involved, group calls positively impact win rates.

AND the later in the cycle the group call happens, the more significant the impact: Win rates that are nearly 2x higher when they occur on the fourth meeting compared to the first.

As you move down the sales funnel and inch closer to a decision, there is less uncertainty. Your buyers are ready (waiting?) to be led to the finish line. And more departments get involved in the purchasing decision.

How to course-correct if deals in your pipeline aren’t multi-threaded enough:

TL;DR: Having only one buyer throughout the sales cycle is the kiss of death. Multi-thread every single interaction, especially the 2nd call.

P.S: Use this sales pipeline template to run your pipeline reviews with your team. It’ll move you past “catching up on deals” and land you in “full-blown deal strategy sessions” in no time.

Sales activity can be a good indicator of deal health, but it’s really only one metric… and not always the best one.

Sales engagement — activity that is reciprocated from your buyers — is where the true magic happens.

DEFINITION: Email velocity, or email frequency, is the number of emails exchanged between a sales rep and prospect over a given period of time. 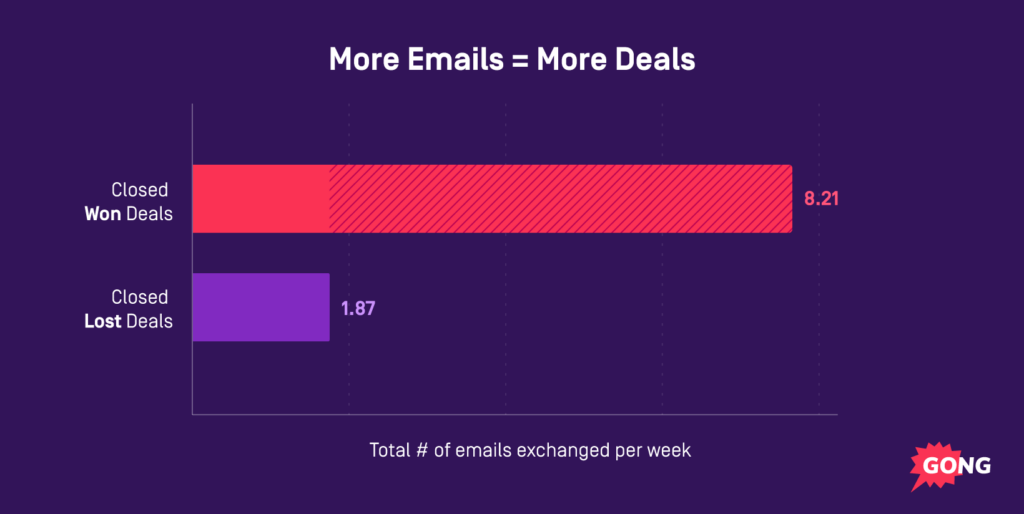 While more emails = more deals is true, it doesn’t tell the whole story.

To give deals an even better chance of closing, lock in 8+ emails exchanged per week with 3+ of those emails being from the buyer:

Said another way, the email velocity from the buyer’s side is one of the strongest indicators of closed-won success.

There is a nice, steady, positive correlation between win rate and the number of prospect emails. 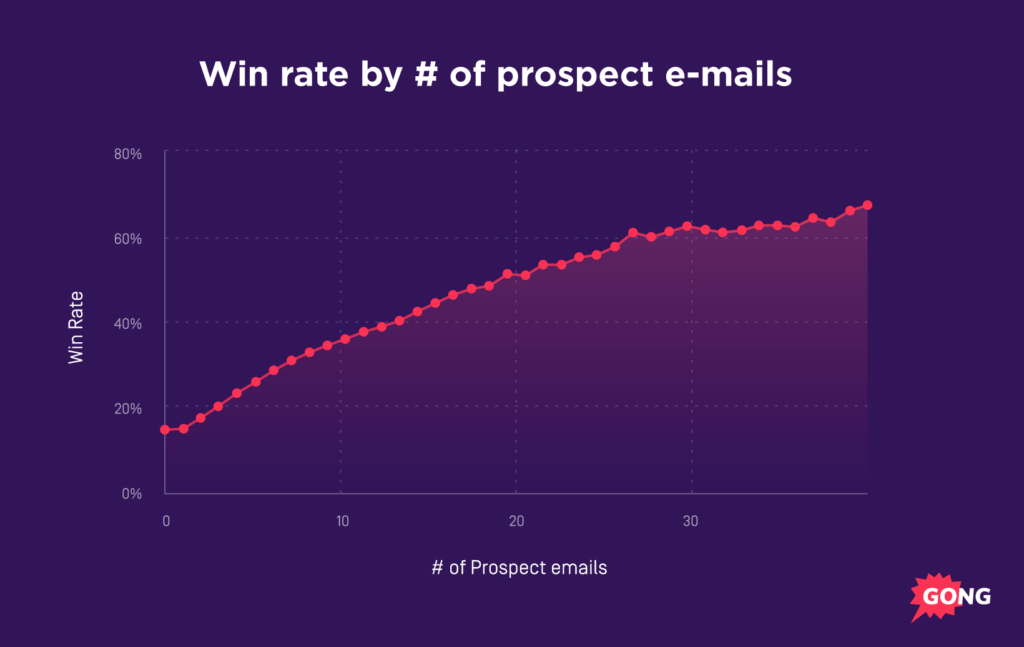 How to course-correct if deals in your pipeline are showing low engagement:

Risks that show up early and go unnoticed.

How can you overcome the biggest deal risks?

I did the work for you and analyzed thousands of opportunities to find out how you can counter the #1 threat to your pipeline.

It’s all in these 5 Deal Warnings preventing you from closing revenue.

It’s how top earning reps sprint past quota (while everyone else is putting out fires left and right).

As we said in the opening, pipeline management can be a challenge — especially when most sales pipelines deal with “best guesses” and “hunches” and “I’m pretty sure this is what is going to happens.”

As you know, Gong lives in the real(ity) world. No opinions or hunches, or I’m pretty sures.

Get a real-time view of your sales team’s pipeline with the Gong revenue intelligence platform. Our software connects seamlessly to your CRM and other communications systems to capture and analyze customer data using AI.

Understand risk. Learn how pipeline can be (and is) affected. Get a first-hand view of which opportunities are truly the ones to roll up in your weekly/monthly/quarterly forecast.

The Gong platform can also be used to get a better handle on deal strategy and deal risks. No need to update your CRM as Gong automatically records, logs, and tracks calls into your CRM. Have a deal that may go south? Gong will let you know. Lacking a multi-threaded conversation? Deals stalled? Gong.

Specifically, Gong provides deal warnings on some of the biggest forecasting self-doubts:

But we take it a step further than just a warning. We also suggest (based on data) the recommended course of action. In many instances, we even provide a templated response you can customize and personalize.

Gong knows… which means you know, and your entire team knows.

Gong’s sales pipeline management software leans into the most reliable data: customer interactions. But not just any old customers. YOUR customers.

If you are a sales manager, all of this means significantly less time playing catch up in deals and more time leaning into strategy, ideally what makes you a valuable leader.

Gong helps sales leaders save time and eliminate redundancy. Sales forecasting can be a labor-intensive process. Virtually every organization has an array of sales forecasting spreadsheets that need to be created and maintained… often manually. Time is money and you are wasting time — multiple hours every single week collecting all the data, chasing down teams to submit their numbers, diving into those deals, and finally sending off a forecast you feel confident in.

Gong helps sales leaders align all systems. When everything is not integrated into one system, and people are managing their own spreadsheets, there are different versions of the truth. Not good. Without a single source of truth, misalignment between senior leadership and the front lines is inevitable.

So are you sold? Ready? Or maybe just a touch curious?