Unlike bottom performers, superstar reps get bombarded with questions during sales demos.

And that changes everything.

Once buyers understand the value they sprint through the sales cycle.

These are the 5 “acts” that winning sales demo scripts follow PLUS 5 examples to follow as you build out your script.

Before jumping into the product, start with an overview of business problems, narratives, and insights.

The most brought-up topics in the first 10 minutes of winning sales demos help build the context.

This allows successful AEs to set up the demo so that:

It usually comes in the form of an emphatic “yes, that’s exactly the problem we are dealing with right now.”

Showcasing a product and its benefits without explaining the context makes it look like a solution in search of a problem.

That’s a clear sign of a flawed demo script.

Most deals aren’t lost to competitors.

They’re lost to the status quo.

An effective demo script sets up the context to counter the status quo.

And leads into a pitch that focuses on loss.

Why does this approach work?

Its strength comes from a phenomenon known as loss aversion. It’s the concept that people put 2X more effort into avoiding a loss than they do into gaining benefits.

Make it clear that if the customer stays in the status quo, they’ll incur losses. Point out exactly what those losses are in a ‘loss pitch’. It’s much more effective than a benefits pitch (though it will likely feel odd for reps at first). More on how to create your own sales pitch template here.

Not sure what a loss pitch looks like? Here are a few examples of a benefits pitch flipped on its head and turned into a loss pitch: 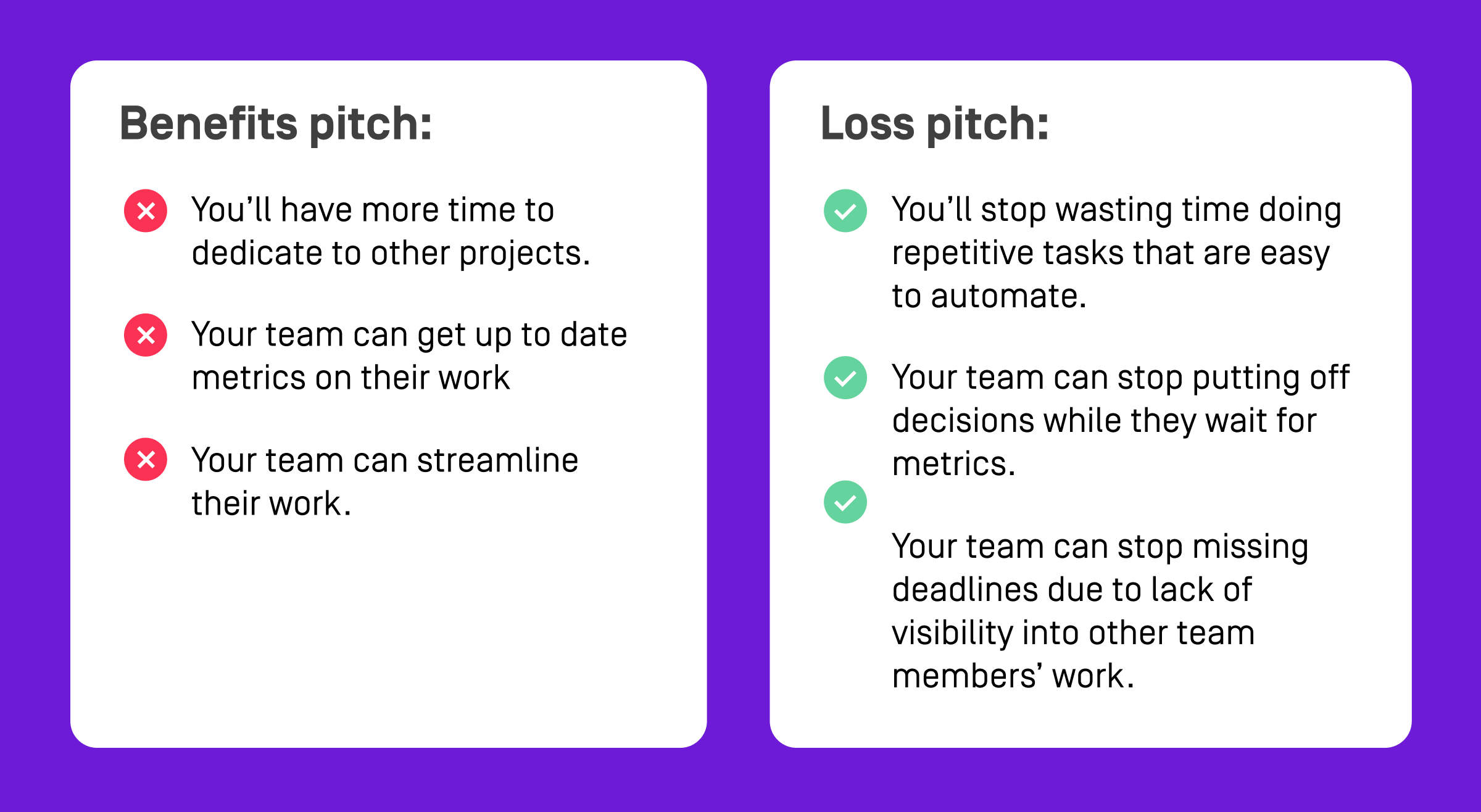 P.S: Staring at a blank page? Use these 3 money-making sales call scripts to kickstart your sales demo script.

Now back to the demo script:

Most reps make the mistake of saving the big stuff for the finale, the tail end of their sales demo.

But this isn’t a fireworks display, and you don’t want customers to zone out before you hit “aha” moment.

Instead, align your talking points with your customer’s biggest pain points.

It’ll grab their attention from the get-go.

And set the pace for the rest of the demo.

Example #2: Present Your Solution As The Answer

This highly successful approach works consists in tying your product demo back to specific pain points.

When you start doing that, you’re no longer just clicking around a confusing interface.

You’re role-playing how/why/when your buyers will use your product.

Once again, here’s the soundbyte: 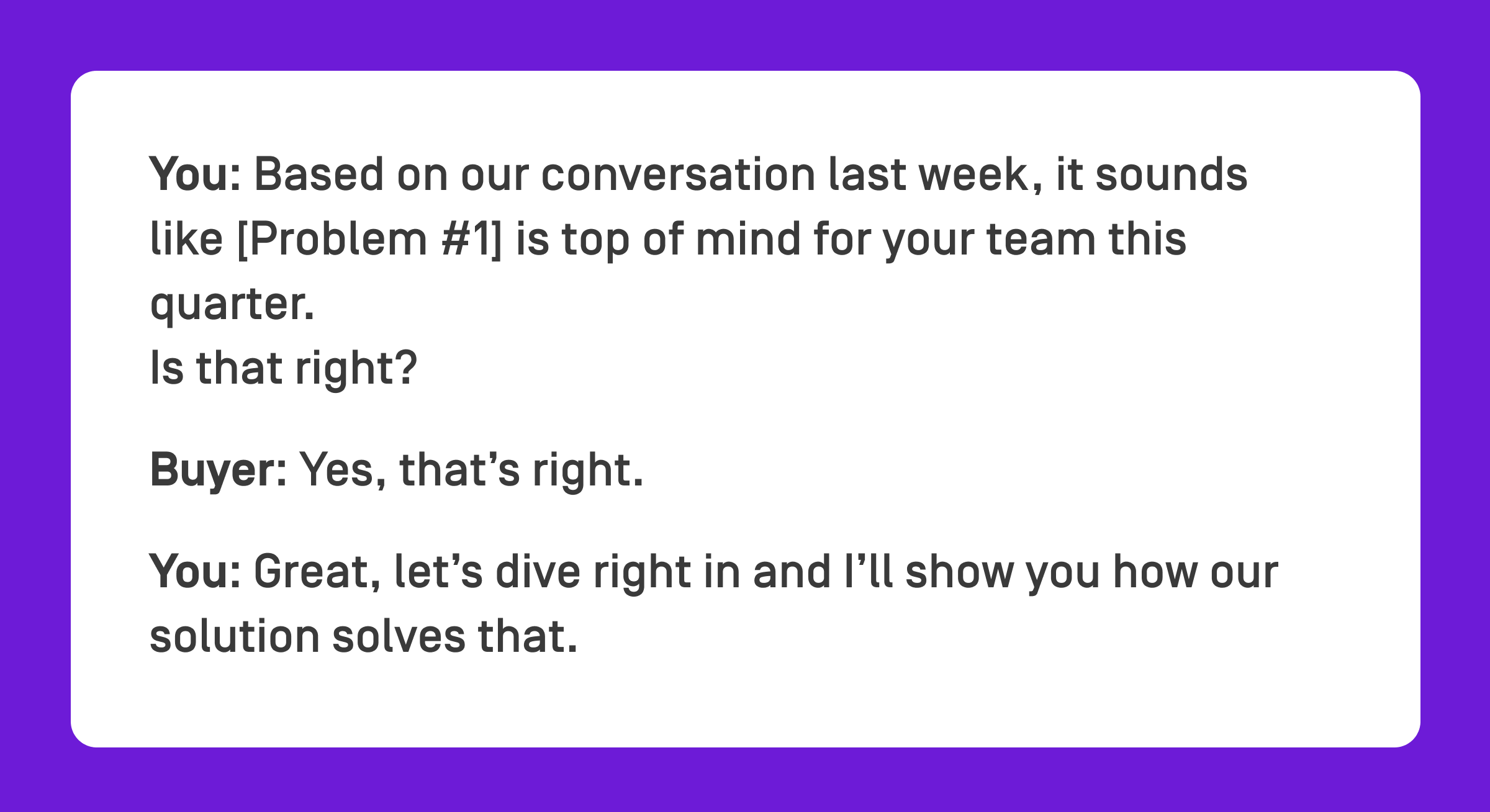 When you rattle off mega-names, you alienate most customers instead of drawing them toward you.

Chris Orlob called it years ago:

Buyers must feel that they belong to the same tribe as the customers you mention during your social proof techniques.

Here’s what to do instead:

And make sure your before/after stories are from companies that are similar in size, sector, and scope.

With this approach, there’s no room to argue that the ROI model doesn’t apply. You’re simply telling a story about what a similarly positioned customer achieved.

Once again, this probably feels contrary to gut instinct, but data has shown that using customer-appropriate before/after stories is far better than throwing down big-name social proof.

Here’s what a short version of a before/after story could sound like:

More is not better.

Instead of trying to fit in every feature, every use case, every whatever.

Show them how your product solves their top problem.

No less. But also no more.

That’s a significant difference, and one that demonstrates that more engaged customers mean more closed-won deals.

Here’s an example of how to weave questions into your script that’ll open the door and get the questions flowing:

Your sales manager reminds you every quarter (month?):

You gotta book next steps.

And winning sales demos are no different.

So add it to the script – no room for improv.

Remember: Win rates are higher when next steps are discussed at any stage in the deal cycle.

Example #5: Lock In Next Steps Before Hanging Up

If you use the call script examples we set out above, you’ll be in great shape by the end of your demo.

And at the end of it, remember to move when your prospect is engaged so the opportunity doesn’t pass you by.

Set a date now for your next meeting. Your prospect is more likely to attend something you agreed to together on the phone or in person than a meeting you invited them to via email.

Here’s the demo script template to lock in that next meeting: 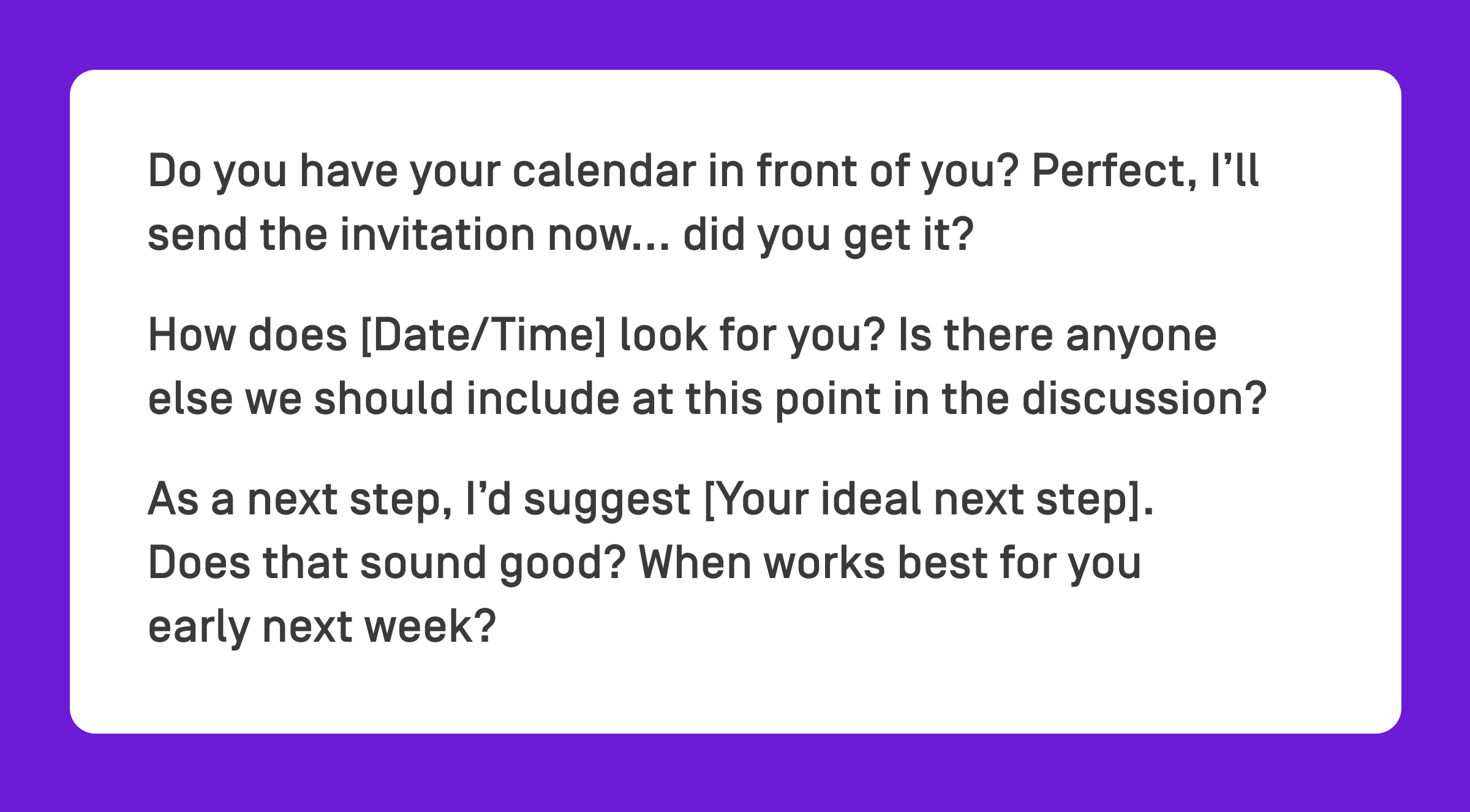 THIS Is The Perfect Sales Call Script

That’s what you’ll be after you try these 3 sales call scripts.

It’s got everything the data actually tells us about successful sales calls.

And it even includes a demo call script template to get you started: