Bad sales emails. We’ve all sent them — even if we don’t want to admit it.

Most get deleted without being read. Occasionally, you’ll get a snarky reply telling you how bad your email is.

Sometimes, though, you’re completely in the zone, churning out emails that tick all the right boxes. The kind of emails your prospects can’t help but reply to.

Want to send more of those kinds of emails? You’re in luck. We’ve dug into the data and compiled five awesome sales email examples you can use at every stage of the buyer’s journey.

What are the most common types of sales emails?

Sales emails come in all shapes and sizes. Here are some of the most common types of sales email:

What makes a high-converting sales email?

Want to know what will make your email more likely to convert? We dug into Gong’s datasets to find out.

If you want to turn off a qualified prospect as quickly as possible, start off your email by promising ROI with no context. It’s a serious mood killer.

You may have helped a company triple its investment in a matter of months. But we promise your buyer does not want to read it in an email. After reviewing 132,000 emails, we found ROI language of any kind decreased success rates by 15%.

Remember, you can’t simply tell a buyer what you think are “the facts” and expect them to lap up everything you’re promising. Don’t push statistics, build a relationship and sell them a dream and you’ll have better luck moving them down the pipeline. 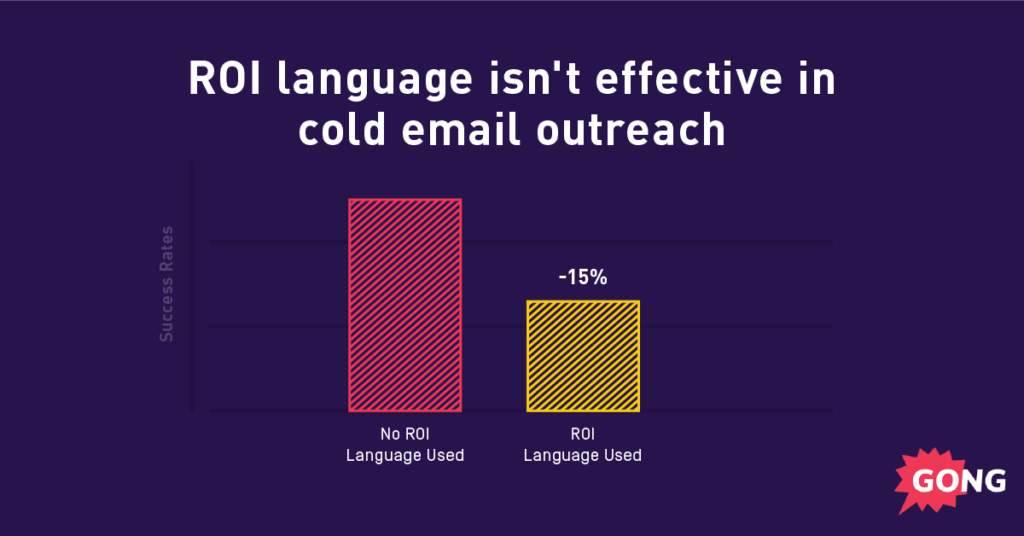 If you want to be a successful emailer, you need to grind through the writer’s block. Why? Because our data shows long emails are 15x more effective at booking meetings during cold outreach than short sentences.

This isn’t an excuse to waffle, though. Or to send your prospect an essay on why your product kills it. Instead, focus on being concise and delivering as much value in as few words as possible.

If in doubt, use the anatomy we lay out in the next section to give your email structure. 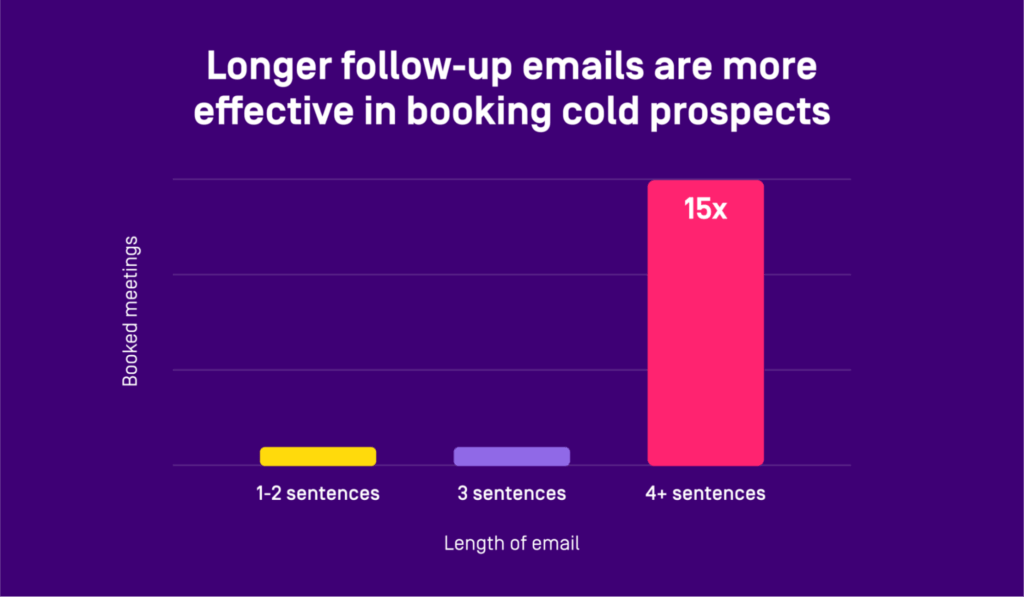 Use the right CTA

When it comes to closing your email, a killer CTA is crucial. But the right one depends on the reason for your email.

In cold outreach, asking for interest, rather than a specific time and date for a call, wins out. Analysis of over 300,000 emails tells us you’re twice as likely to book a meeting doing so.

For deal emails, it’s a different story. If you’re trying to close, a specific CTA is best.

Asking for a specific day and time at the end of your email more than doubles the number of meetings you book compared to the cold email stage. It’s also 12% more effective than an interest-based CTA at this point in the funnel.

By this point, your buyer is already interested. It’s in both of your interests to find a time and date to talk as quickly as possible. 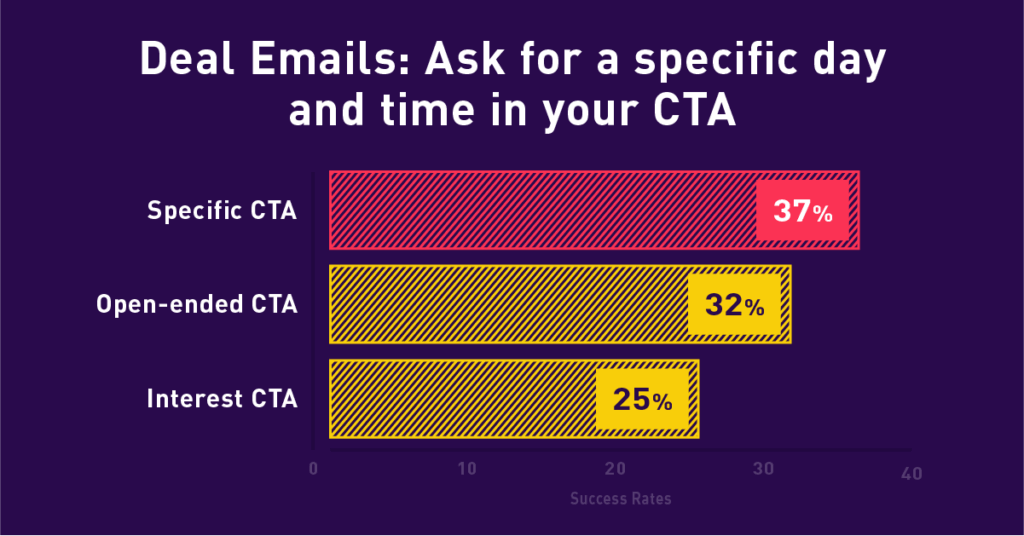 Remember your manners when emailing if you want to build rapport early with a prospect.

You may think phrases like “hope all is well” are a waste of time, but they work. They work big time.

Our data shows that using the phrase “Hope all is well” increases meetings booked by a whopping 24%. 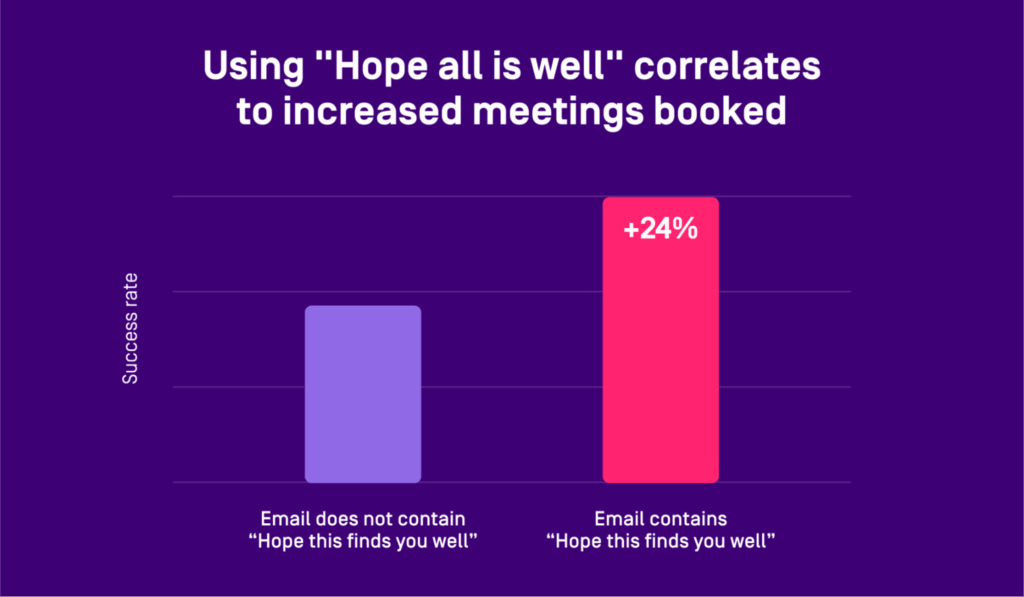 If you’re still on the fence about adding a nicety to your email, why not combine it with a bit of humor or personalization? Doing so will help you build rapport even faster.

The anatomy of a successful sales email template

Almost every great sales email has a few things in common.

I say almost because sometimes, breaking the rules can be really effective.

But if you want to give yourself the best chance of success, make sure your sales email has a catchy subject line, a personalized introduction, a clear pitch, and an effective call to action.

Your subject line is the first thing your prospect will see, and their decision to open your email hinges on it.

Make ignoring your email impossible with an attention-grabbing subject line.

Remember to sell the benefit of your product, not its features. For example, our SDRs wouldn’t send an email with a title like “Here’s a better way to listen to your sales team calls.” It’s super salesy and boring. A subject line like “Discover the one tiny reason prospects keep turning your rep down” is much more intriguing.

Of course, you don’t want to promise something you don’t deliver and get labeled as “clickbait,” so make sure the email lives up to what it says on the box.

The introductory line is the second thing your prospect will see, and in many inboxes, they won’t even have to open the email to read it.

So your introductory line has to do two things: it needs to grab your prospect’s attention, and it needs to get your email started off on the right foot.

Forget vague or generic lines here. Try to be as personal and as specific as you can. Some of the best cold outreach emails don’t even bother introducing themselves; they dive straight into the personalization (see example two below).

A clear offer or pitch

This is the meat of your email body, so think carefully about what you want to achieve before you start typing.

What you say will depend on where you are in the sales cycle. Either way, don’t spend time talking about yourself; focus your sales pitch on the prospect. If you’re writing a cold email, for instance, personalize your pitch around a pain point you know the prospect has.

Be careful about making too many asks at once in your email body, though. Overload the prospect, and they’ll delay responding because it seems like too much effort, or they’ll want to have an answer for every question.

End your email with a clear, concise, and effective call to action. Don’t leave your prospect in any doubt about what you want them to do next.

Your CTA doesn’t have to be significant — you aren’t going to close the deal off the back of one email. Just focus on getting the buyer to the next step in the sales process.

And remember to tailor it to your stage of the sales process. If it’s early, ask for interest. If you’re trying to close, be as specific as possible.

By now, you know what separates the emails that get read from the ones that go straight in the trash. And you know what structure a successful email should take.

Now internalize these sales tips through seeing them in action by analyzing five examples of sales emails done right.

If you want an example of a cold sales email that breaks a lot of rules but is still super effective, look no further than this example by our own Sarah Brazier.

It isn’t personalized, it’s sent to multiple people at once, and it’s long. But she still booked two meetings after sending it to 37 prospects. 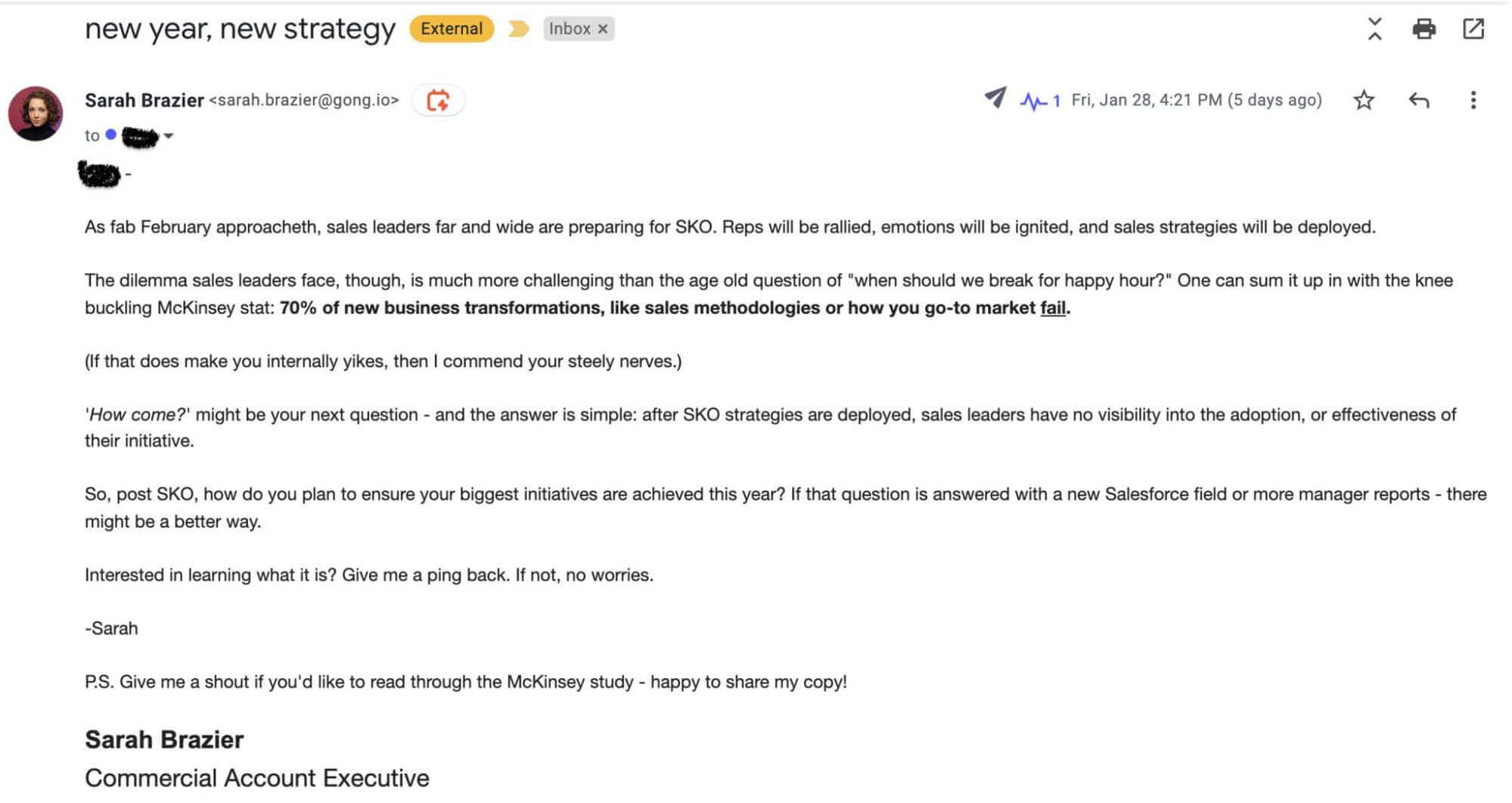 The main reason Sarah thinks this email worked was because of her intriguing and low-pressure CTA. She didn’t force people to agree to a meeting time, which made it more likely people would reply to find out more. And because she’s an awesome salesperson, she was able to turn those replies into booked meetings.

Low-pressure CTAs are something we’ve preached before at Gong. Our research shows that interest-based CTAs are the best-performing calls to action for cold emails.

It works because it sells the conversation, not the meeting. Executives are protective of their time and will say no to a specific CTA. Pique their interest, though, and they’ll want to find out more. 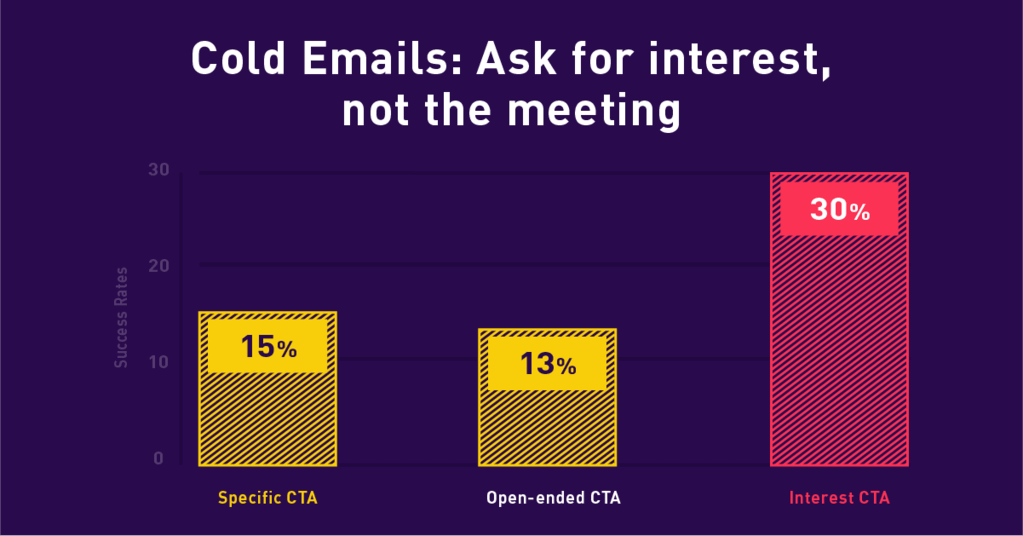 Standing out is key if you want your prospect to take action on your cold email. And personalizing the heck out of it is one way to be a shining star in your buyer’s inbox.

Take this cold outreach email from Gong’s Coby Wayne, for example. Research showed his prospect, Gordon Reiz, was a graduate of the University of Kansas, so he used that fact to personalize his entire pitch email. 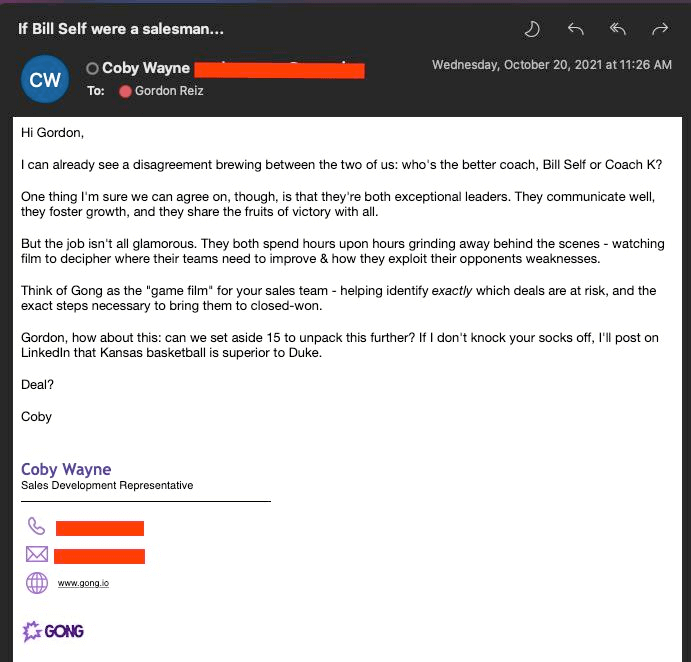 Gordon points out a number of other things Coby did well:

With Gordon becoming a paying Gong customer, those extra minutes Coby spent personalizing his email were well worth it.

No-shows are one of the worst parts of being a sales rep. But you can reduce them by perfecting your meeting confirmation email.

In the example below, Gong’s Devin Reed shows how he and Eliza Pyne adjusted her confirmation email and doubled her hold rates in a week. 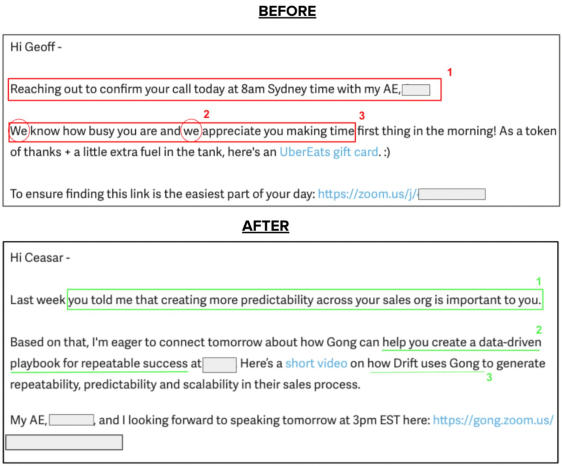 First, she led with value to the buyer, not herself.

Next, she tweaked her language to make it about the prospect.

Finally, she ended with even more value and stopped thanking the buyer for their time. As Devin says, there’s no need to thank them if you’re providing value.

“You’re helping them solve a problem. Your meeting isn’t time wasted; it’s an investment in improving their business.”

If you want to move your deal along as quickly as possible, make sure you’re capitalizing on the prospect’s interest by sending a killer follow-up email after every call and demo.

The trick is to use all of the information your prospect has given you against them. 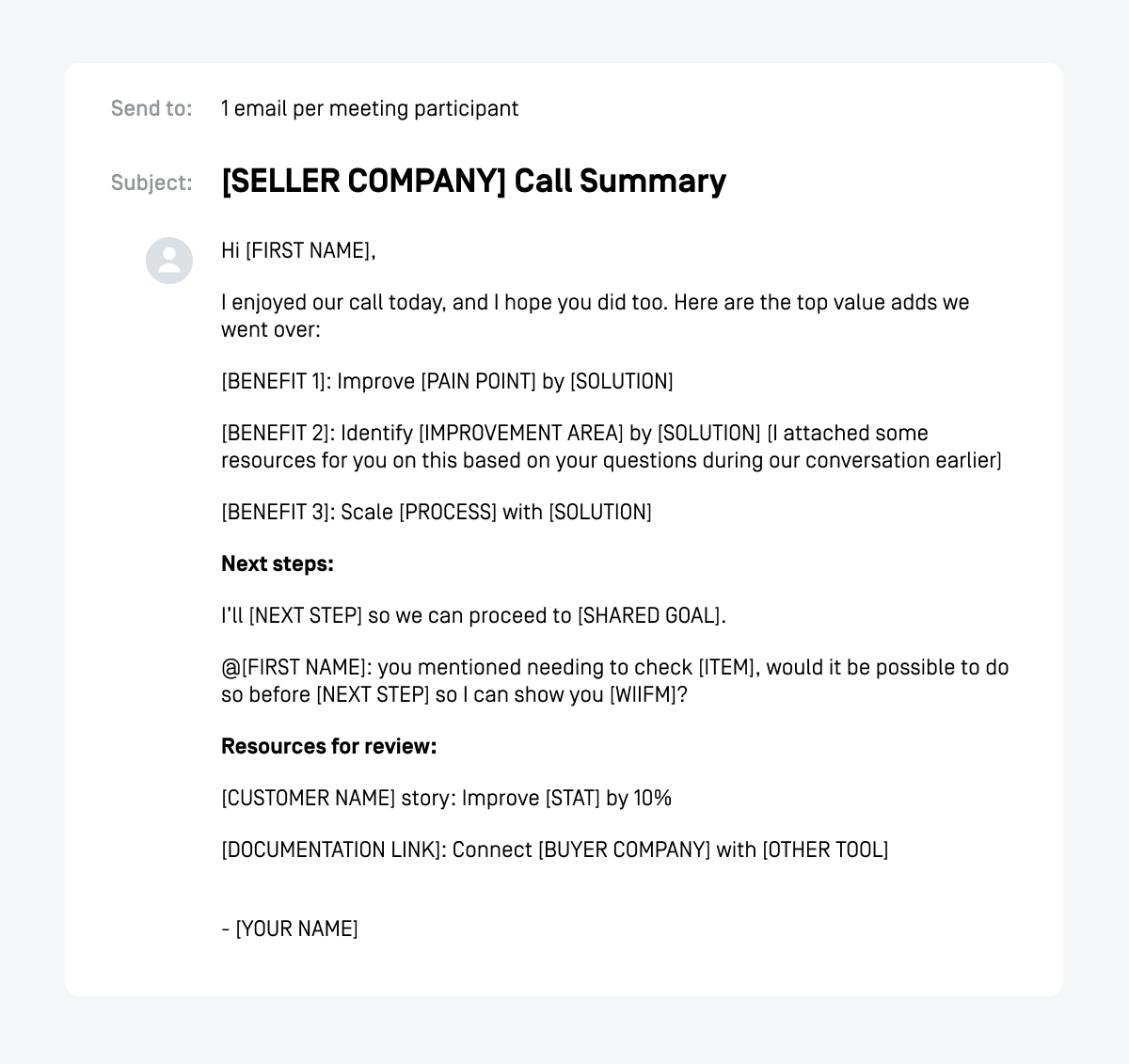 In the email above, we use the prospect’s pain points to reinforce our product’s benefits. And move the deal along by reminding the prospect of what they need to do.

You can personalize the follow-up email further by mentioning the prospect’s timeline.

And go even further by single-threading your follow-up and sending a separate email out to individual email addresses. Write a personalized email to each decision maker with specific next steps and resources.

It’s rarely the case in B2B sales that buying decisions are made by a single person. Our research shows winning deals have at least three people from the buyer’s side in meetings. 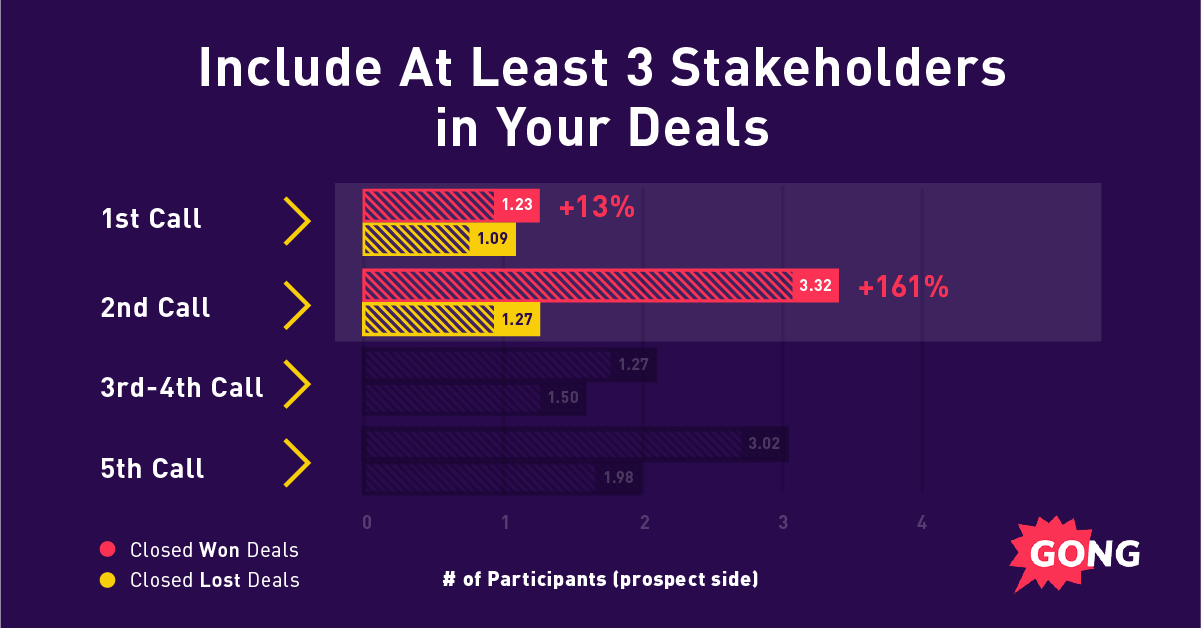 That means you need to build relationships with multiple stakeholders to be successful. Specifically, you need to keep every mutual connection on the same page and loop in other decision-makers using the following email. 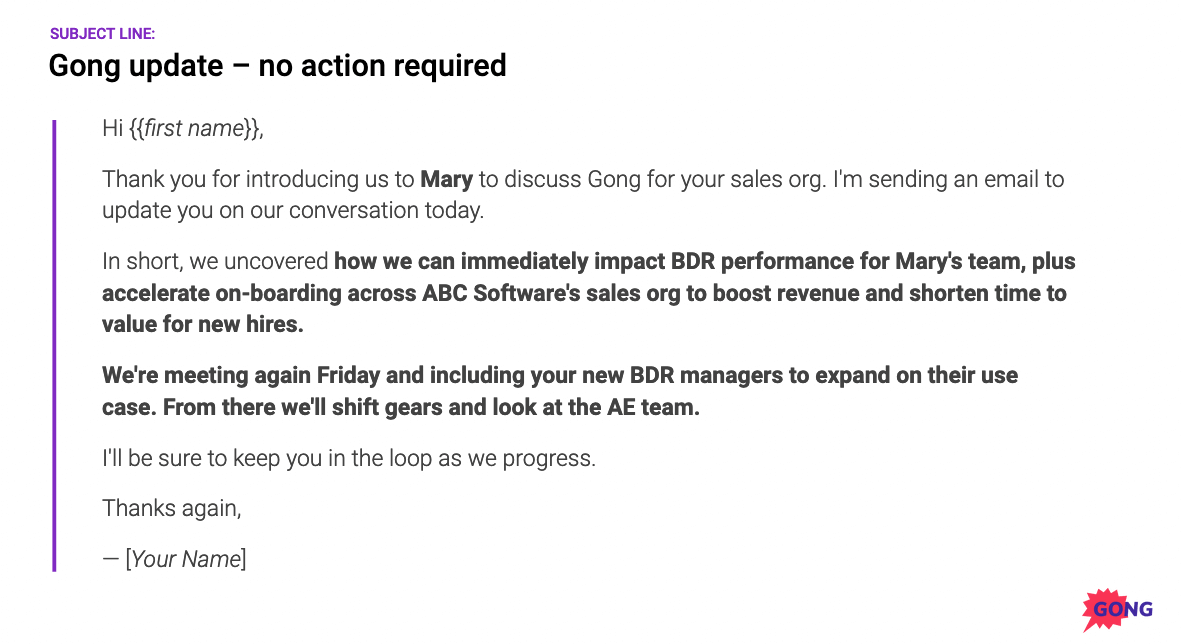 What makes this a standout email is that you do all the giving. Noting in the subject line that no response is required lowers the recipient’s guard and triggers the law of reciprocity. Now they want to give you something in return.

So when you next ask for their time, chances are they’ll say yes.

Create your own winning sales emails with our carefully crafted templates

There may be loads of different types of sales emails, but now you know what all the best emails have in common:

They’re intriguing, they’re personalized, they have a clear purpose, and they nail the CTA.

But consistently nailing this across your team is much easier said than done. We’ve found that one of the best ways to do this is by implementing detailed sales email templates that “force” you (or your reps) to go that extra mile each time.

Lucky for you, we’re willing to share 11 tried-and-tested sales email templates you can steal and use to transform your cold emailing and close more deals.

What To Know About Sales Efficiency: Metrics, How to Improve It, and More
21 user secrets and best practices to get the most out of Gong
Sign up to receive sales stats, data, and insights
SPREAD THE LOVE