Your email is air-tight.

The opening line is personalized.

You even have a crisp “why you, why now” line.

You’re about to let it fly, but something still feels off…

And it’s your CTA.

Should you ask for a specific time to meet?

What about suggesting a conversation instead?

Minutes pass and you’re still staring at a draft email.

You exhale a sigh of relief.

But you can’t let it go. You want to know: what IS the best CTA for cold emails?

The answer may surprise you.

Sidebar: What is Gong Labs?

Before we dive into some next-level number crunching, here’s a quick explanation of how we get our data at Gong Labs.

We analyze sales interactions from our product users (anonymized of course). That includes everything captured by Gong’s software during web conference meetings, phone calls, and emails. Then we analyze how seller and buyer actions impact success rates.

For this report we analyzed 304,174 emails, specifically looking at their call to action (CTA).

We wanted to see what elicited a positive outcome, meaning a meeting booked in the next 10 days. Responses like “Remove me from your list” didn’t make the cut.

We grouped effective CTAs into three buckets for this analysis:

(1) Specific CTA: Asks for a meeting using a specific day and time

Example: Are you available to meet on Tuesday at 4pm?

(2) Open-ended CTA: Asks for a meeting, but it’s open-ended

Example: Do you have time next week to meet?

(3) Interest CTA: Asks for interest, not a meeting

Example: Are you interested in learning more about X?

From there, we analyzed two scenarios: cold emails and in-deal emails.

Now that we’ve set the table, let’s eat (aka book some meetings).

This is the best CTA for COLD emails

Let’s start by acknowledging that the body of your email has to provide solid context that makes your closing CTA irresistible. A powerful CTA is simply the final step to an un-ignorable email.

OK, now for the moment you’ve been waiting for:

The Interest CTA is the highest performing call to action for cold emails. 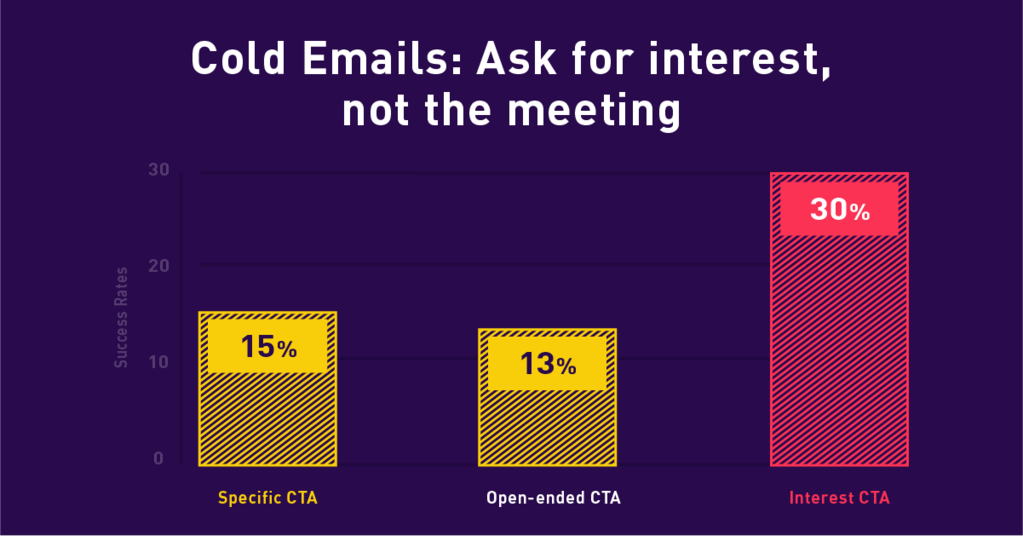 This reflects a new and highly effective approach to prospecting: selling the conversation, not the meeting.

There’s a subtle but fundamental difference between this and the traditional approach of asking for time.

Time is a finite resource. And the decision makers you’re likely targeting are very aware of this. They wish they had more of it.

And we all know resources are scarce right now.

So they’re very reluctant to give it away, especially to a stranger (which at this point, you are).

Asking for time may also trigger loss aversion – the concept that people prefer to avoid a loss compared to experience a gain. Prospects view giving you time as a loss of resources – so they’re much less likely to agree to your meeting.

Interest, however, is not perceived in the same way. It’s not finite, nor is it a resource. And for that reason, sellers have more success when they pique someone’s curiosity instead of asking for resources (like time) upfront.

Once you get the nod that they’re interested, then you can move toward setting a meeting.

But before you go asking every buyer about their level of interest, there’s a catch.

This is the best email CTA for DEALS

Know what IS effective now? The Specific CTA, which asks for a meeting with a specific day and time. 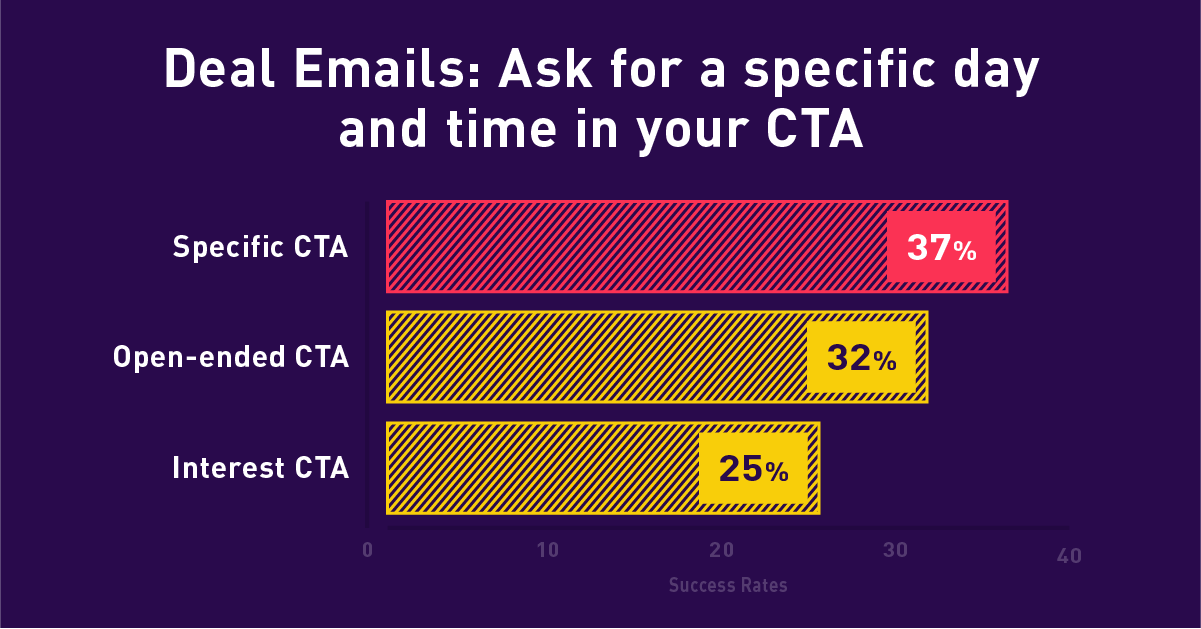 It has the best chance of helping you book a meeting with your buyer once you’ve entered the sales process.

This tactic more than doubles meetings booked, from 15% in the cold email stage to 37% in the deal stage.

They’ve already decided to meet with you, so their interest is established. That’s why you need a direct approach that gets straight to the point.

You have to confirm a time and ship the calendar invite before your buyer gets distracted or changes their mind.

It’s exactly why Amazon has a “Swipe to purchase” option. They know that removing barriers increases the number of buyers who get to the order confirmation page.

And the same applies to you when you’re “selling” a meeting to your buyer.

You want to move them to “invite accepted” as quickly and easily as possible.

That’s why the Specific CTA is so effective in this scenario.

It doesn’t leave room for uncertainty. It’s direct and to the point.

Your buyer will respond that either: 1) Yes, that time works or 2) That time doesn’t work, but 1 PM is open (for example).

You’re providing an anchor point for their response. They won’t have the unpleasant — and distracting task — of scanning their busy calendar, looking for white space.

Your anchor point speeds up the decision-making process.

Here’s 11 sales template emails to help get you started.

If you’ve read this far, you believe in adding the power of science to your sales approach.

And since building pipeline today is more important (and harder) than ever, why not give yourself the upper hand? I’ll look the other way while you steal these 43 CTAs for Highly Effective Emails.

Take ‘em. They’re yours, for free.