More often than not, sales call steps are thought about in the wrong way.

But compare them to a map that you would use while driving.

When you’re going somewhere new, you almost always use maps to give you a plan and direction.

Then, each proceeding time, you might use your directions a little less.

Many sales reps even go into calls blind, not even know how to structure the conversation.

If you don’t have the right plan going into a sales call, it’s going to be much harder to get to the next stage in a sales cycle.

Our data team has analyzed nearly 2 million sales calls with AI and machine learning to find out exactly what works on sales calls.

We’ve formatted everything into 7 concise steps for you to follow.

When you think of a rep that’s hungry to close deals, you probably picture the stereotypical seat-of-their-pants, adrenaline-pumped sales junkies.

This assumption is wrong.

The top sellers succeed because they stay calm, cool, collected.

Mega-successful reps are some of the most methodical and strategically minded people in business.

They’ve rehearsed their sales call process, and never show up just to “wing it.”

We mapped out conversations to see which topics were discussed, for how long, and when.

The top 5-10% of performers use a more organized, repeatable sales process than their peers.

Here are three data points to prove it:

Top reps cover more topics than their peers: 15 compared to 12 topics on a 43-minute call: 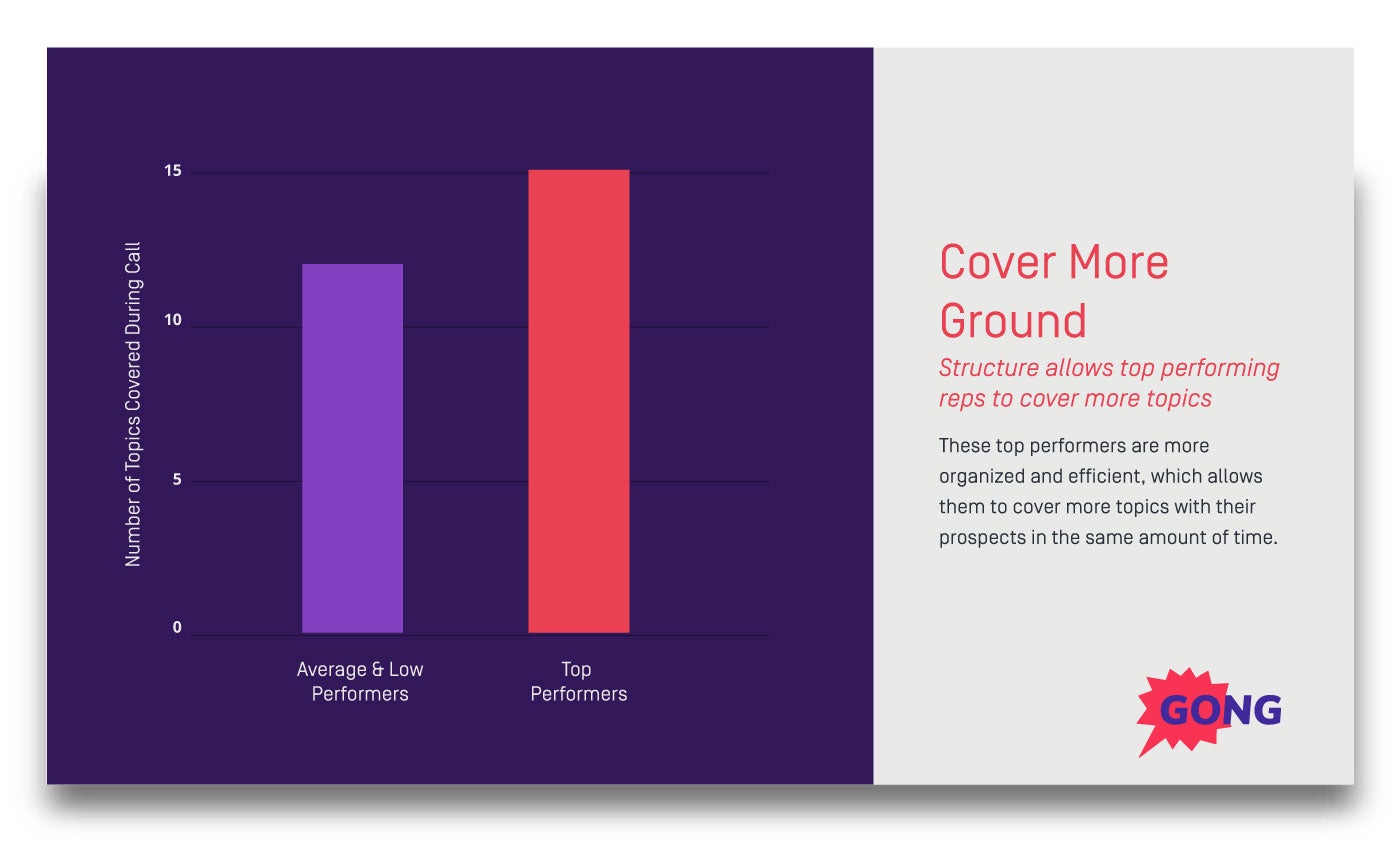 You might think that with so many topics, their calls would be all over the map.

Their conversations are sequential.

When they switch topics, they stick with something related.

It’s as if they use larger themes in their conversations so that every topic switch falls under a theme and is a natural progression, not a leap.

In fact, their linear approach means they have 15.6% fewer topics switches on average, even though they talk about more topics.

They jump around a lot less than their low-performing peers who are all over the place: 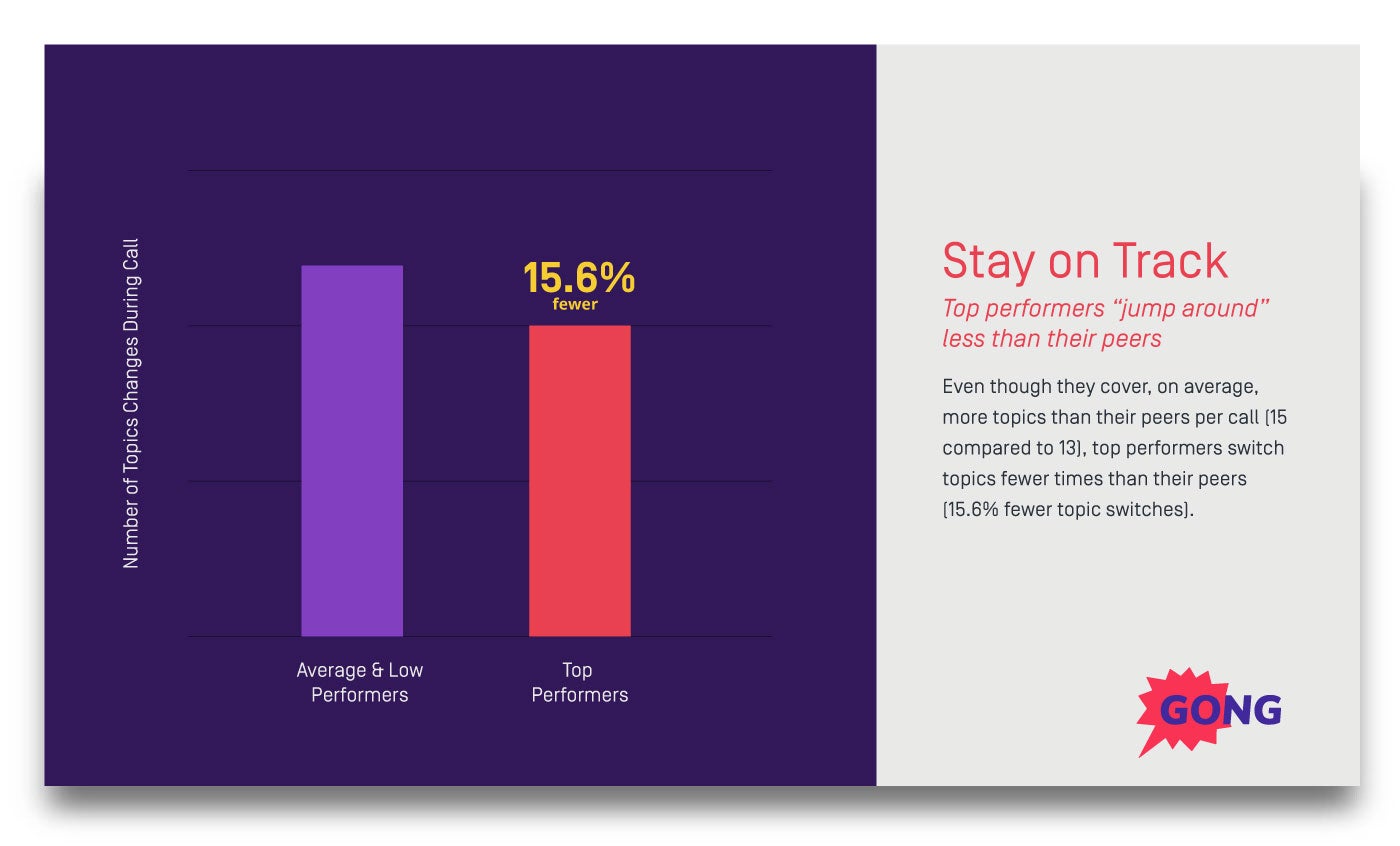 The key takeaway for reps?

Prepare in advance and know how to move your conversations smoothly from start to finish.

Sales Call Step 2: Open Your Call Like a Pro

A great sales call structure starts with a great “opening” to the meeting.

During any discovery call, it’s your job to identify either problems or unmet opportunities.

In other words, you’re looking for both pain and/or gain.

Now that you’ve built some rapport with the prospect, here’s how you’re going to run the rest of your discovery call.

You’ll want to dive deeply into 3 to 4 customer problems, then wrap up with next steps.

Looking at more than that makes all the problems seem less urgent.

You also risk spreading your prospect’s focus too thin.

Discussing 3-4 problems has the highest likelihood of moving the deal to the next step: 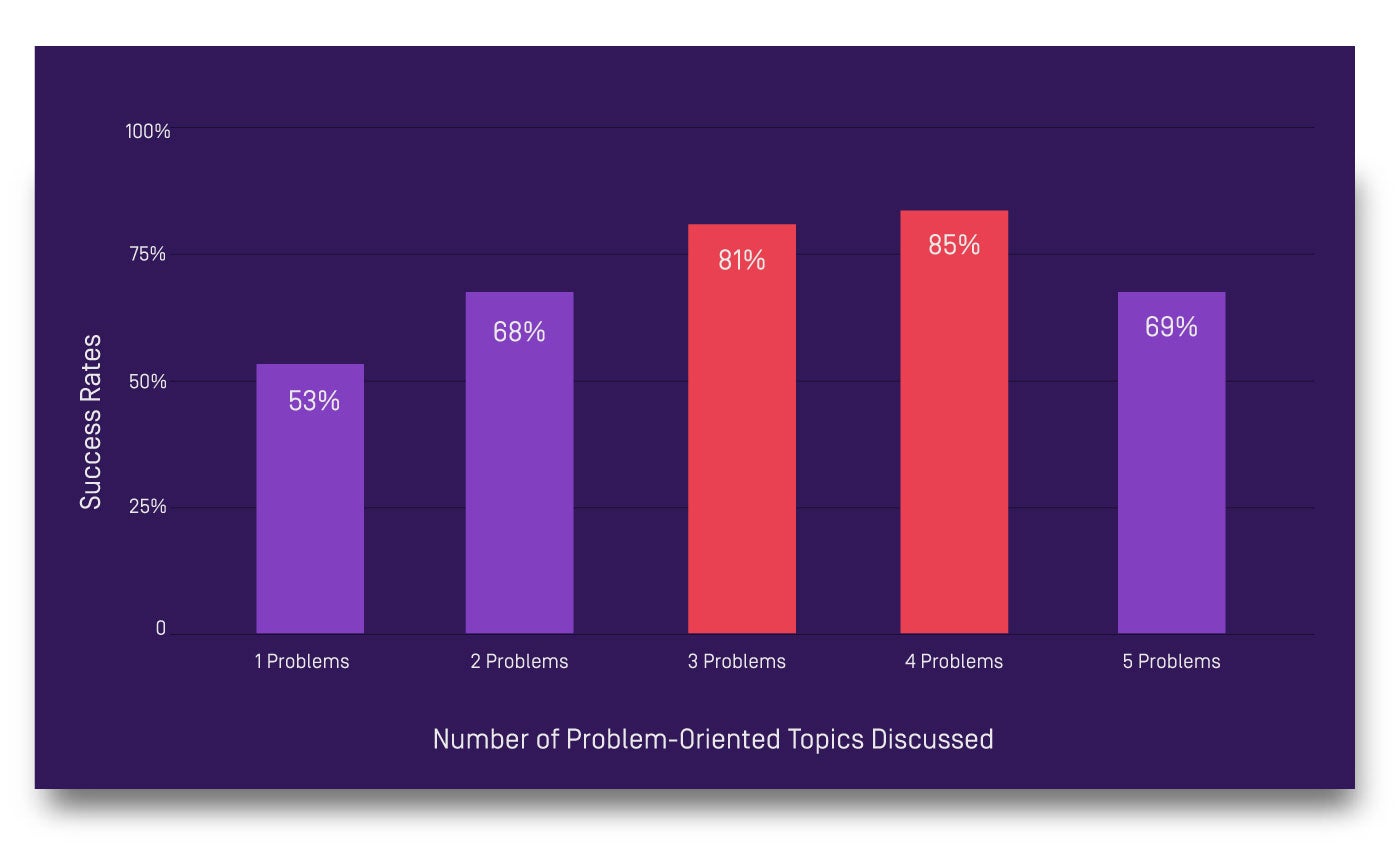 When you’re unpacking those problems with the prospect, ask around 11-14 questions in total.

More than that and you’ll see a diminishing rate of return.

Fewer than that and you won’t go deep enough to uncover useful information: 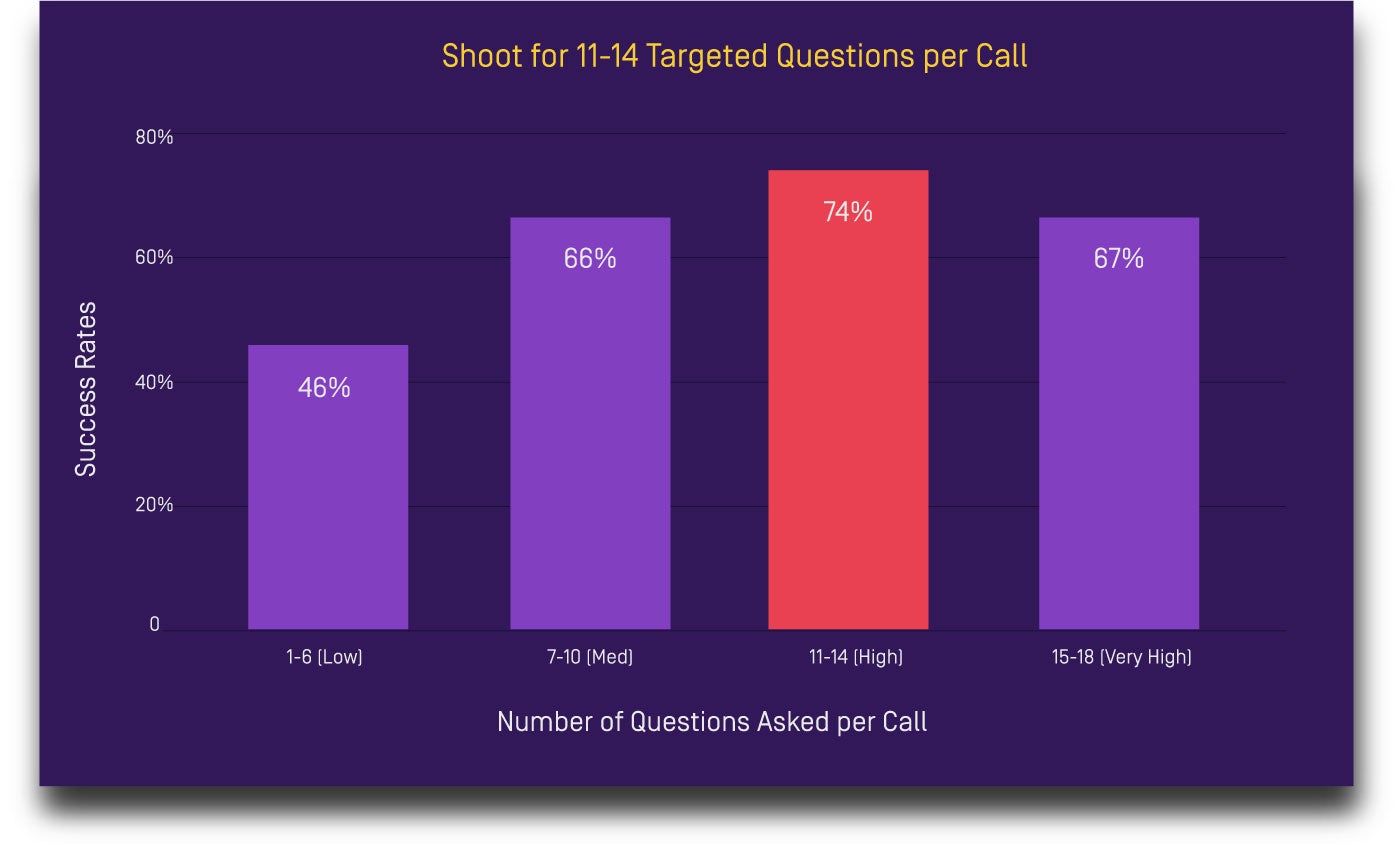 Remember though, the types of questions you ask matter.

Those look at the prospect’s business issues, challenges, goals, and areas of concern.

They’re strongly tied to your chances of closing a deal: 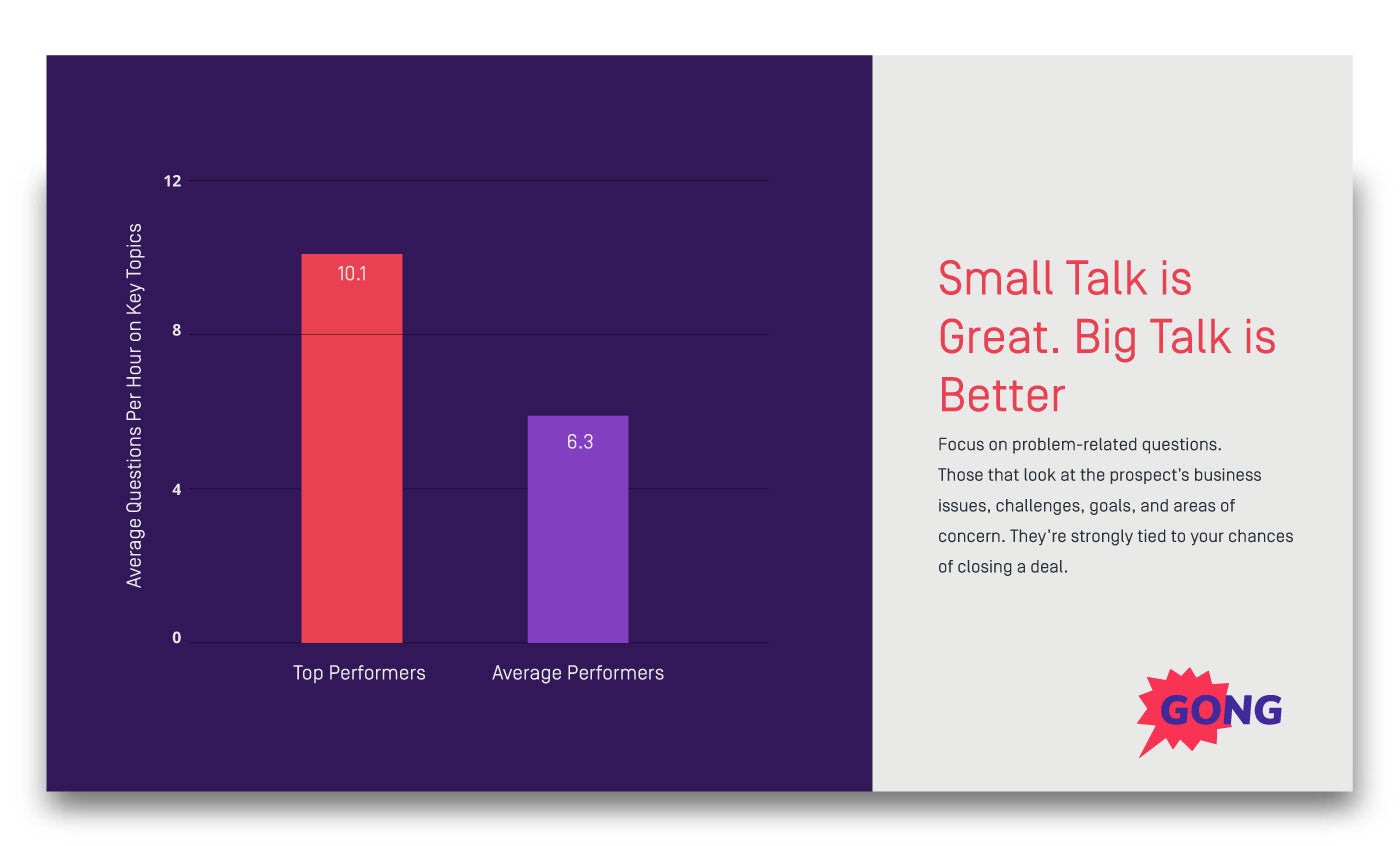 These sales call scripts include questions to ask on your next call.

Remember, you don’t want to bombard your prospect with too many questions.

You want to create a natural ebb and flow with the right number of targeted questions.

Top performers intersperse their questions naturally throughout the conversation.

Their average-performing peers load questions at the beginning of the conversation: 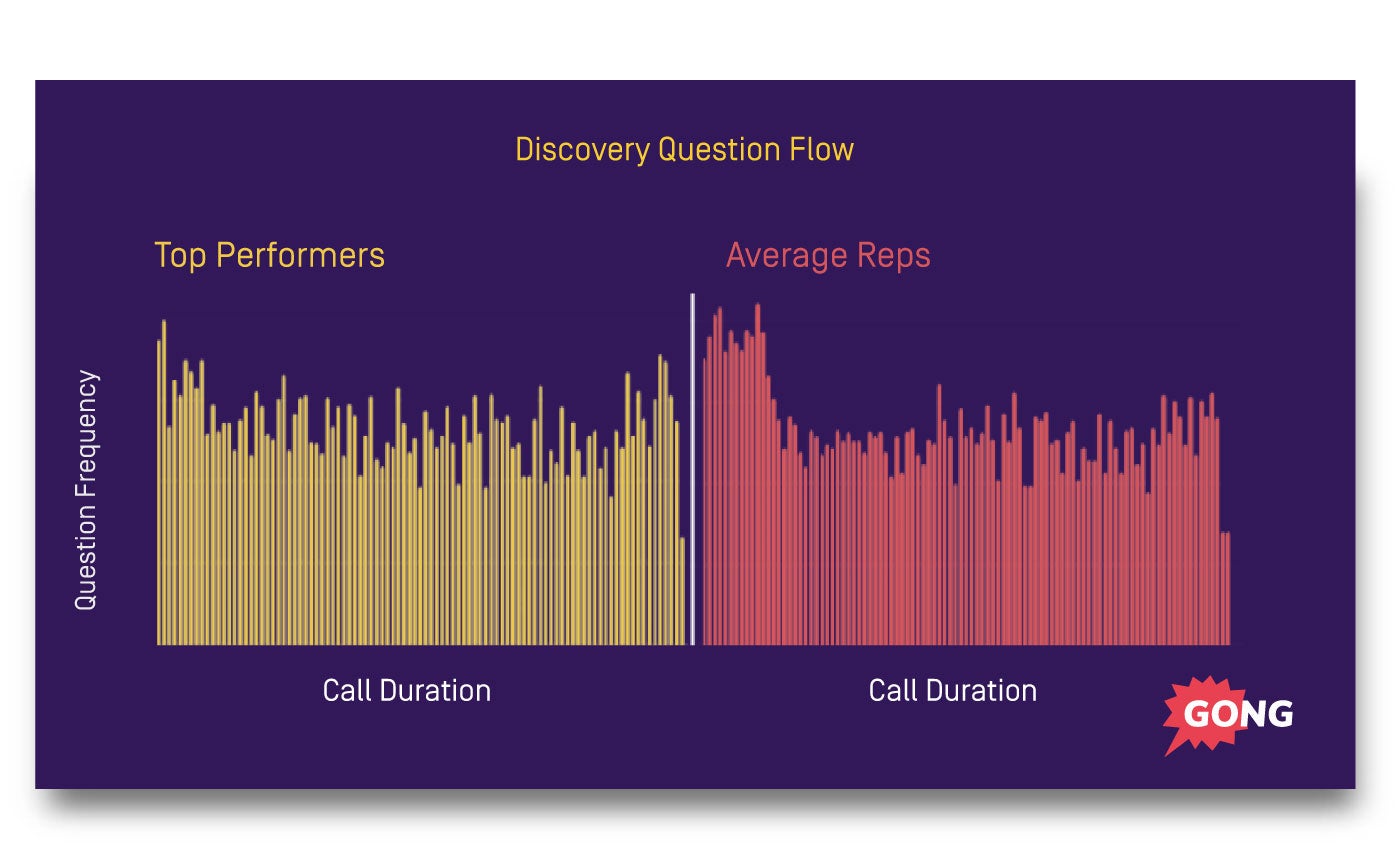 Frontloading questions makes you sound like you’re going through a checklist.

The last thing you want to do is sound like an interrogator.

Instead, focus on having a natural conversation by listening to what your prospect is saying and asking genuine, relevant questions.

There’s an added bonus by doing this.

The natural flow of switching back and forth with your customer increases your likelihood of getting a second meeting: 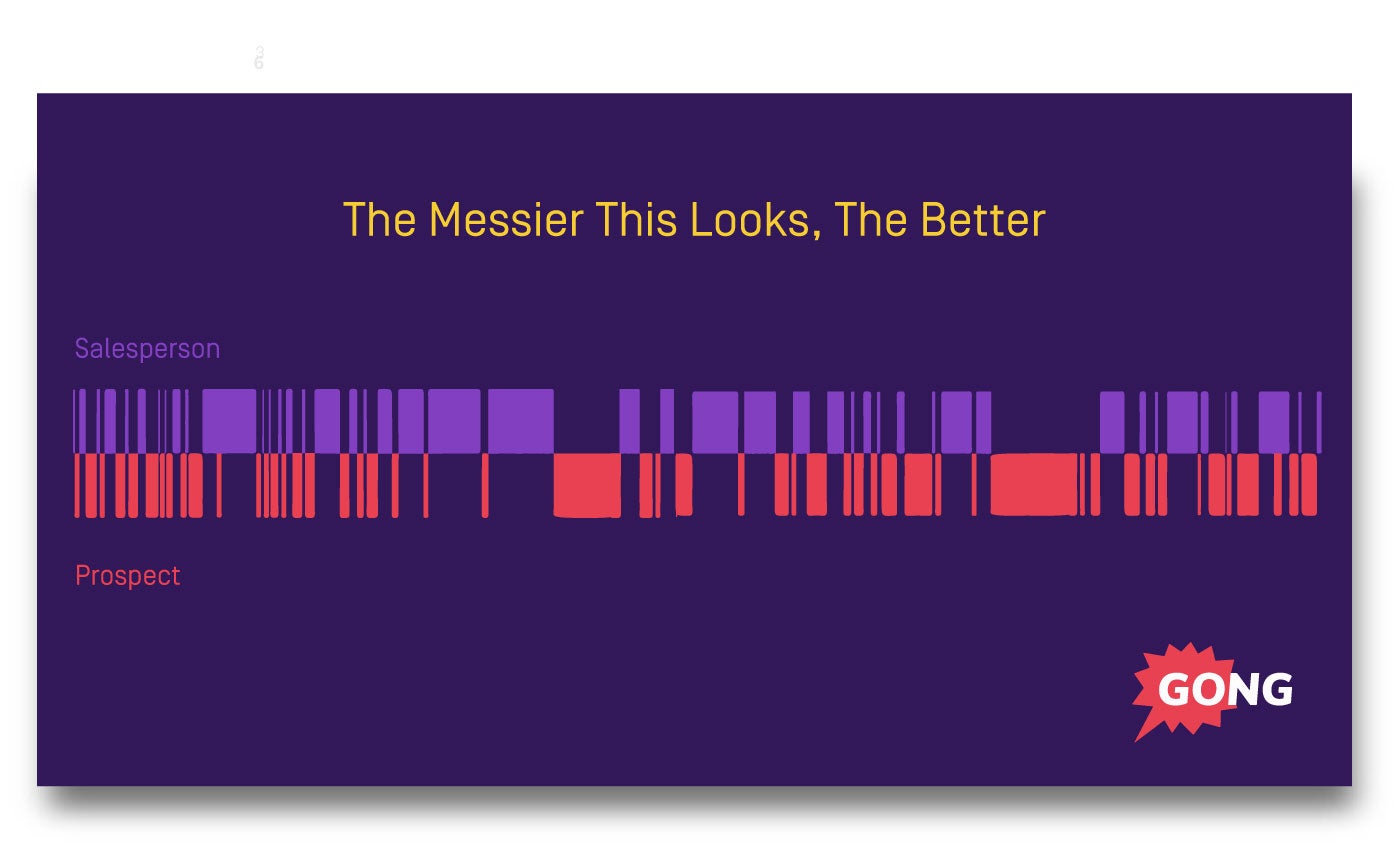 Think of the conversation as verbal ping pong. 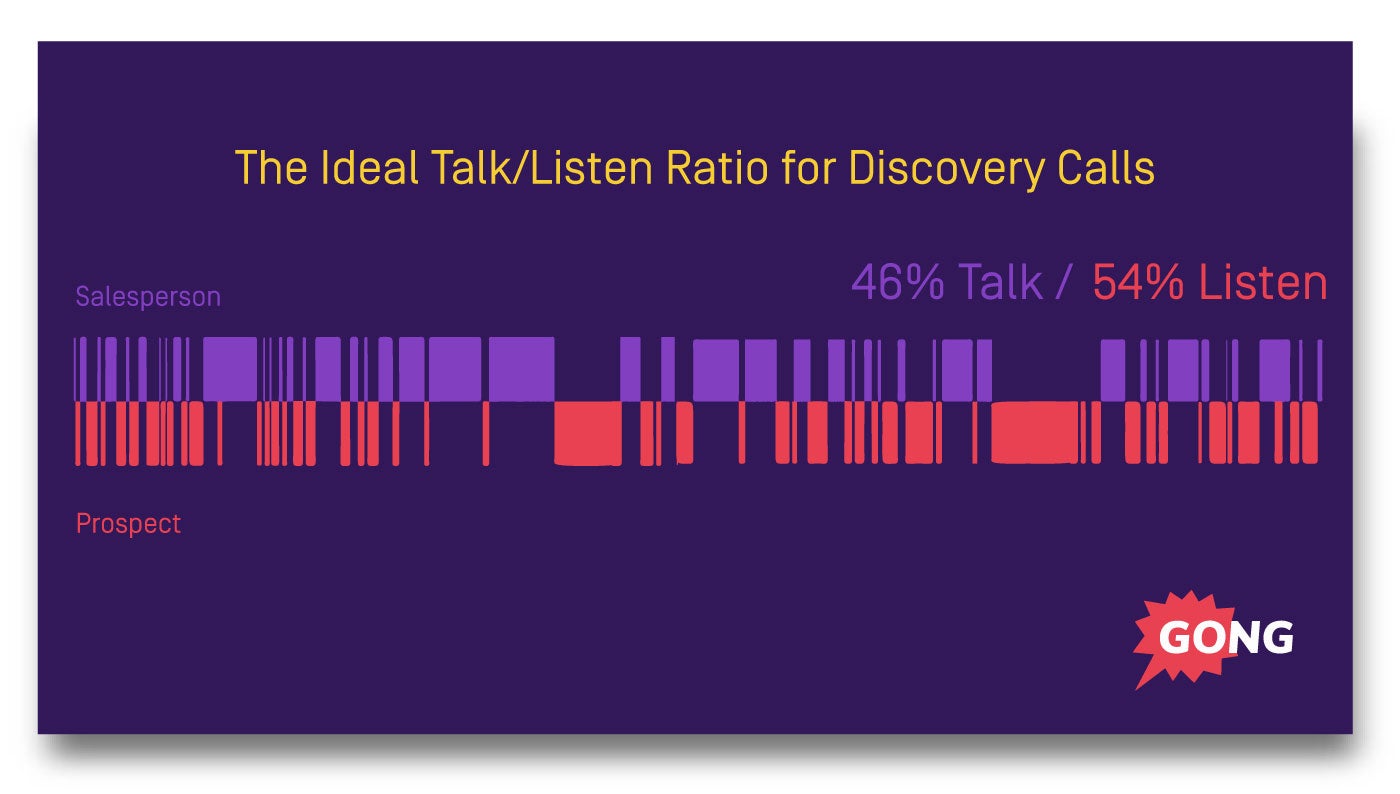 Above is where the top-performing reps sit in terms of talk-to-listen ratios on discovery calls.

Here’s a look at the talk-to-listen ratios of their average and low-performing peers: 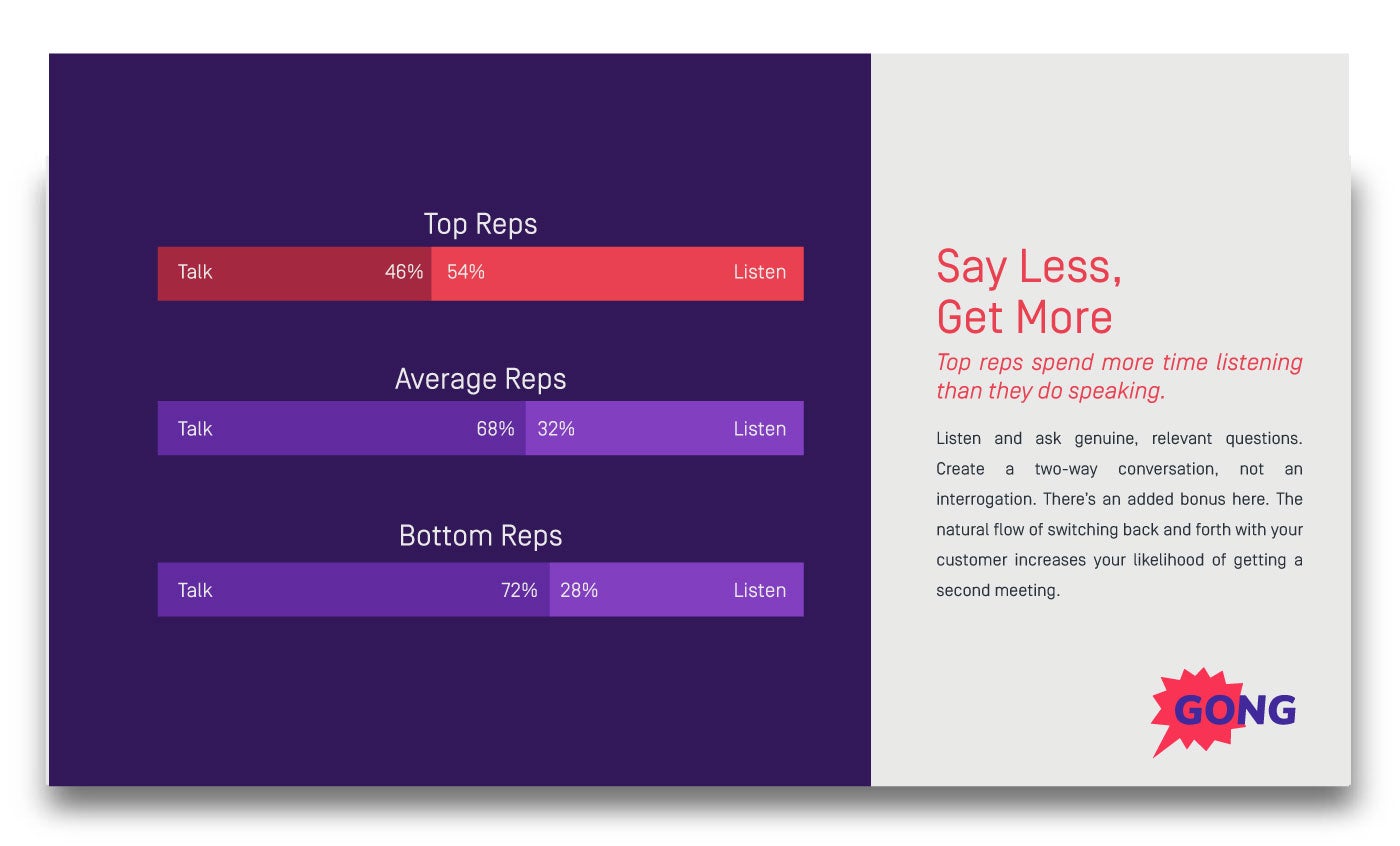 Any sense of how you’re doing in this department?

Check your own ratio using Gong.io.

The results may surprise you. (We all talk a little more than we think we do.)

If you get a shocker, at least you know exactly how to fix this.

(P.S. Click the banner below to get our printable Discovery Call Cheat Sheet):

When you’re ready to present, strive to flip your presentation on its head.

We’ll get to why in a second…

According to the data from 67,149 recorded sales demos, we found the following commonalities among successful presentations. 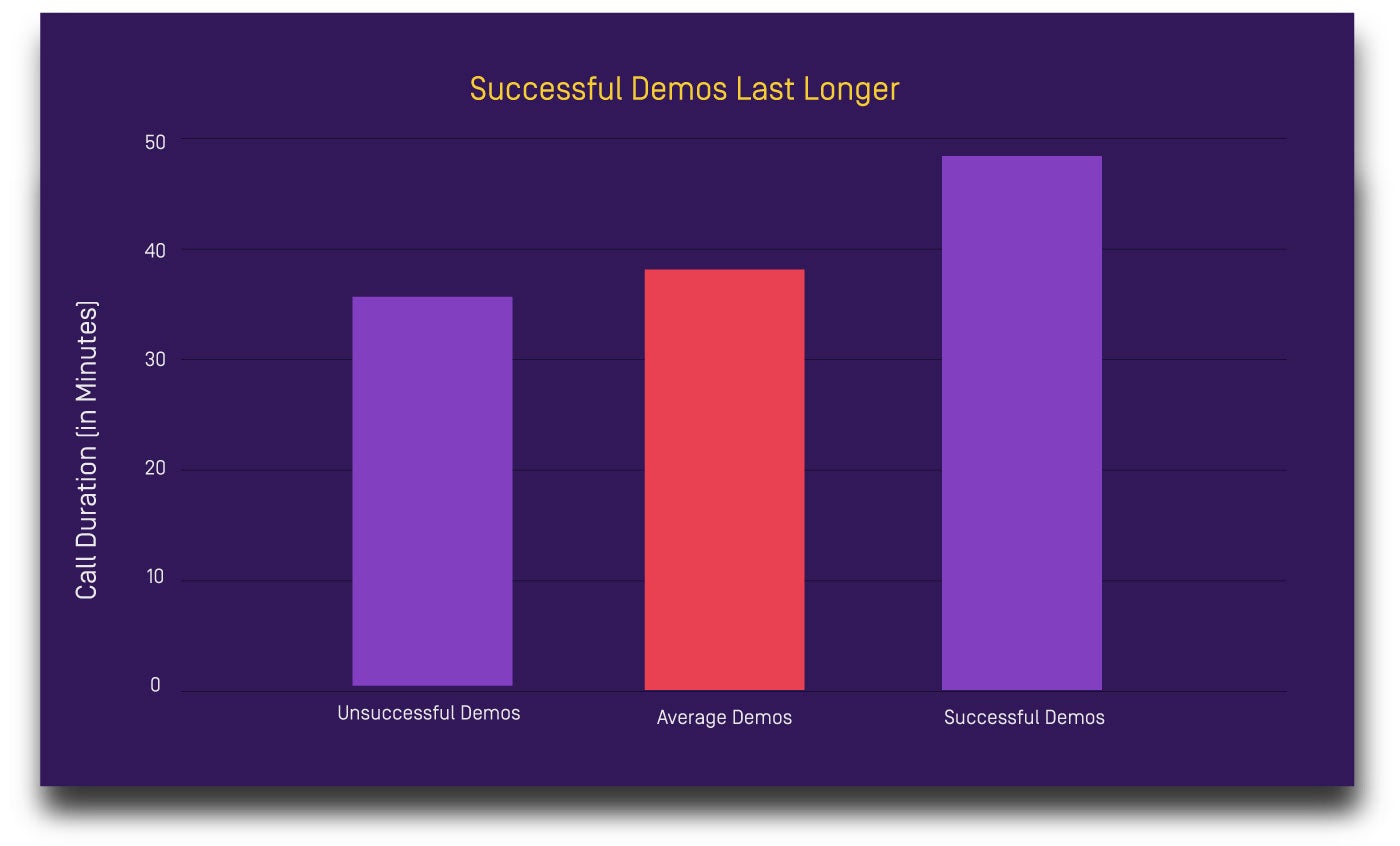 This means you shouldn’t spend all that time walking your prospect through every product feature.

Instead, give them a brilliantly targeted demo that stimulates great conversation that lasts and lasts.

And while the talk-to-listen ratio of that conversation doesn’t matter much, you will want to pay attention to your interaction patterns.

Successful reps have shorter bursts of speech that allow others to jump into the conversation more often.

They don’t talk for longer than 76 seconds.

Remember that as you head into your call. 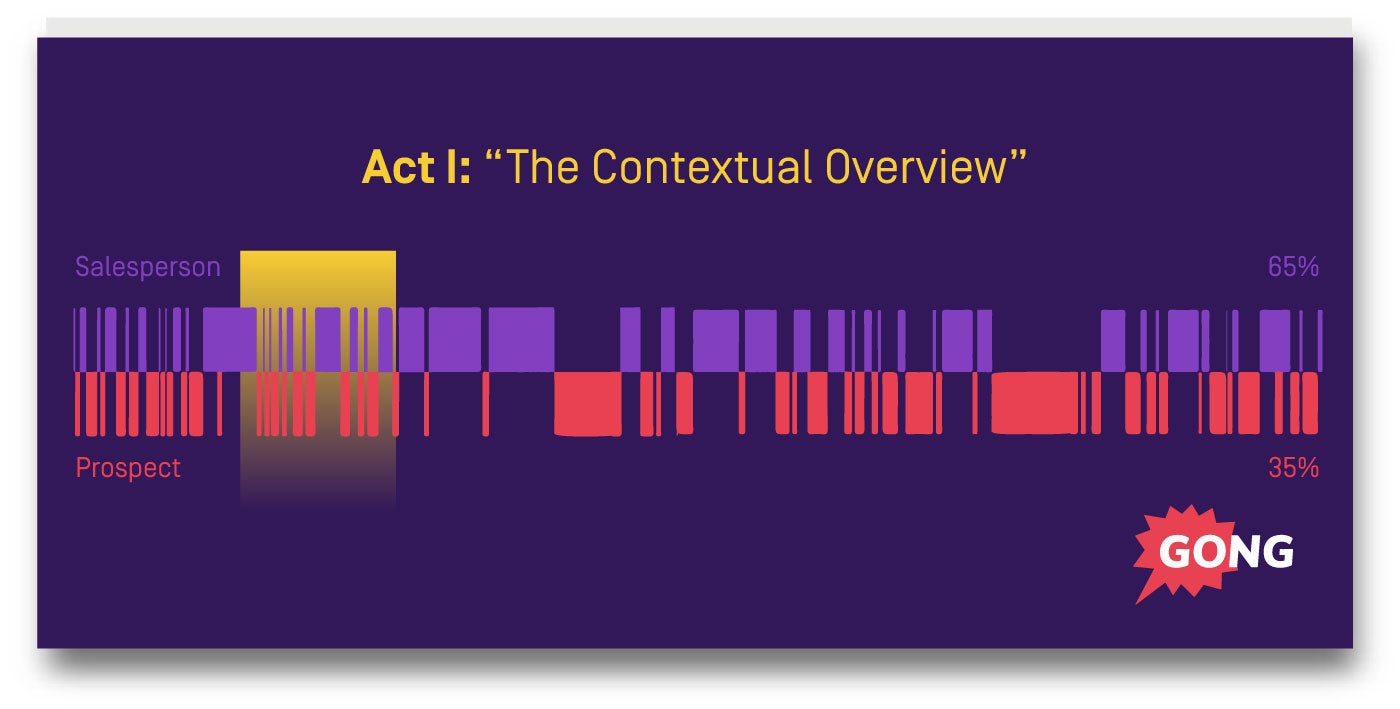 Talk about industry problems, narratives, and overviews for less than two minutes.

Make sure the prospect understands the problem you solve, or the reason your company exists.

And as we mentioned earlier, once you head into the second part of the call, you’re ready to flip your demo upside down: 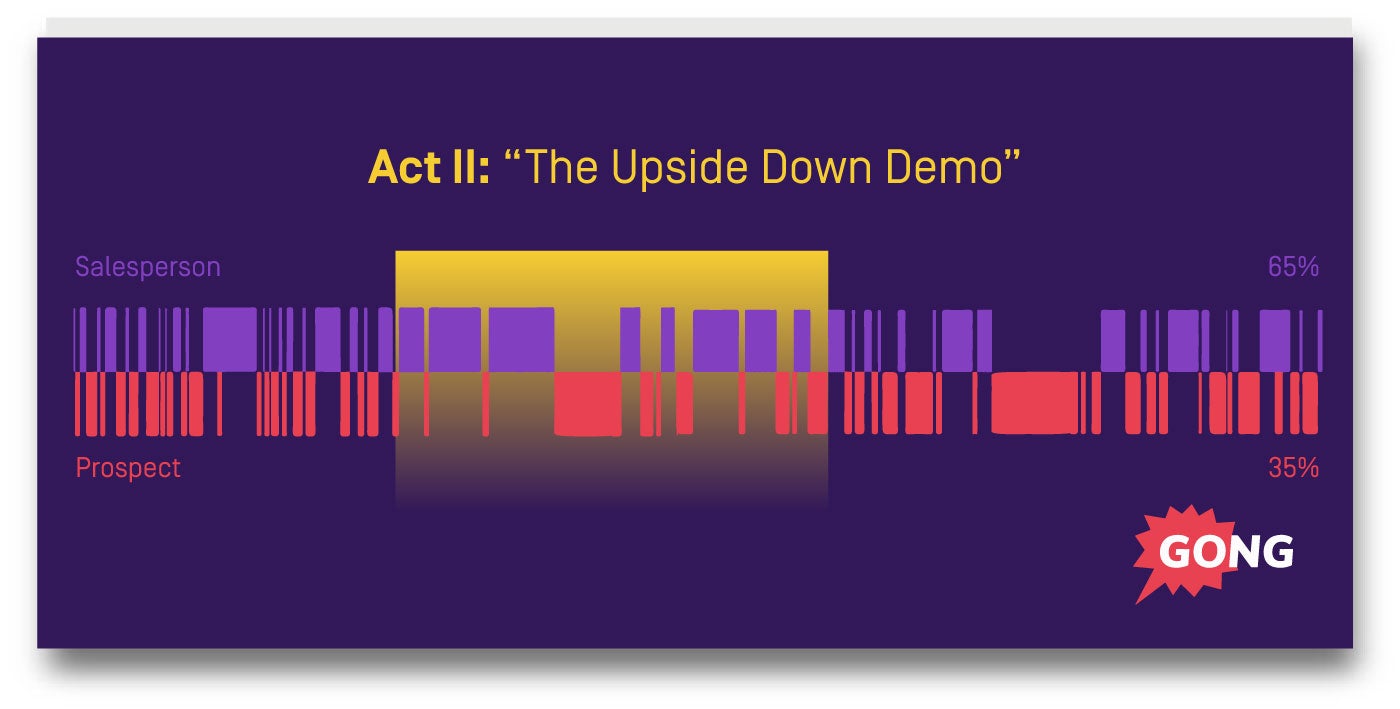 How do you do this?

Start with the conclusion.

Don’t build up to a big reveal, rather, start with the best part.

It’s the use case the prospect talked about the most during their discovery call.

If they talked about coaching for seven minutes, onboarding for four, and pipeline management for five, start the demo with the coaching use case.

It will definitely snag their attention and carry you through the bulk of the call.

Hit all the points you wanted to hit along the way.

As you head toward the end of the call, the rate of speaker switches per minute will speed up even more, up to 36% in the second half of the call. 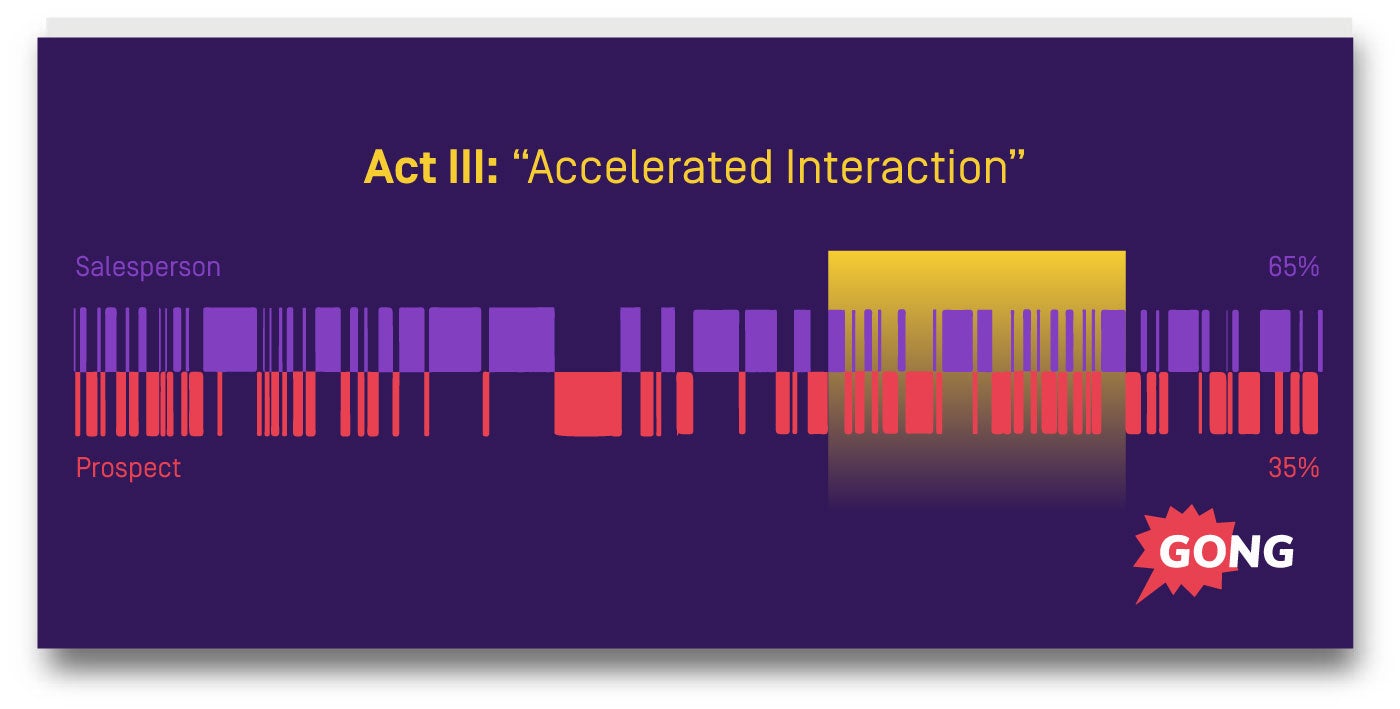 The prospect’s engaged. They have questions. You have answers.

It’s a great back and forth.

It sets you up perfectly to wrap up with pricing and next steps:

On average, deal-closing demos discuss pricing between the 38 and 46 minute mark.

(P.S. Click the banner below to get our free, printable Demo Call Cheat Sheet):

You’ve just done an amazing demo, but your buyer is voicing objections.

Don’t get too up in arms.

It’s a sign they paid attention and are engaged.

With our objection handling techniques below, you’ll handle their objections like a walk in the park.

For starters, don’t rush in with an answer the second your prospect stops talking.

For way longer than feels comfortable.

Let their objection trigger you into slo-mo mode.

After hearing an objection, star reps pause for much longer than their less successful peers: 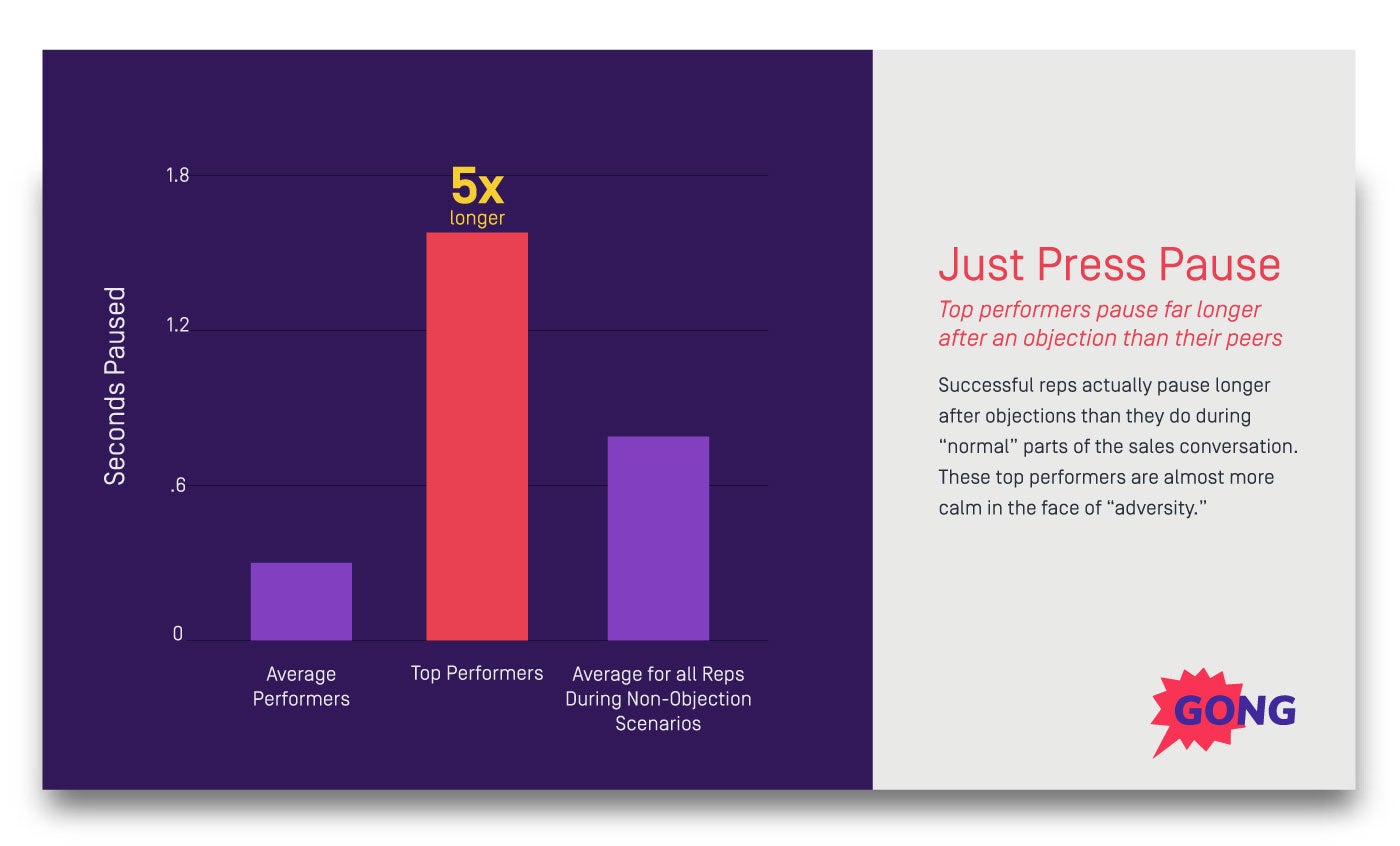 When you’re too eager to overcome an objection, you’re not thinking as clearly.

Know what else happens in panic mode? 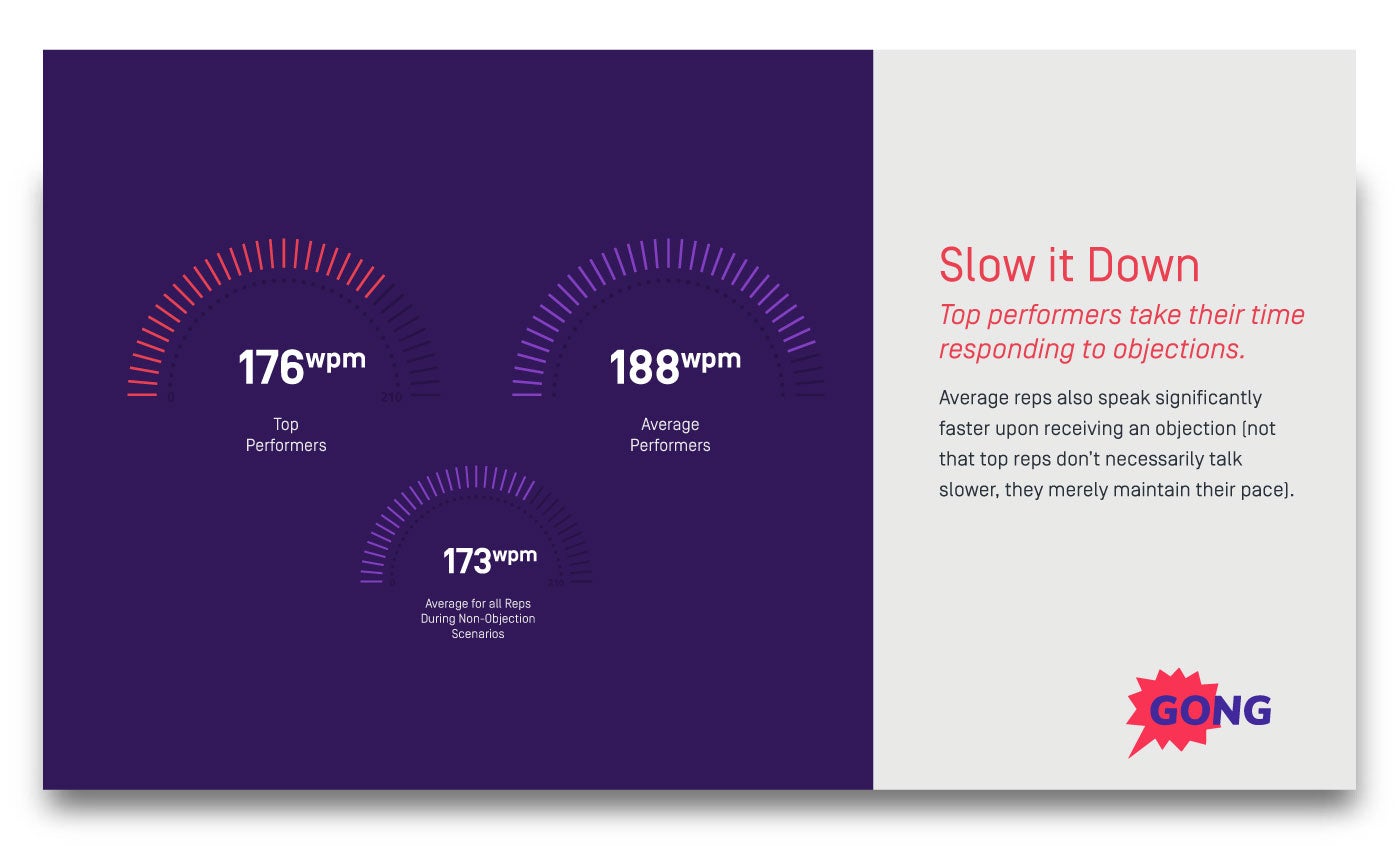 Talking in panic mode also makes you highly likely to pull a “knee-jerk” monologue for up to 21.45 seconds.

A long, uninterrupted spiel is not the way to go.

It’s not fun for anyone on the call.

It reeks of insecurity and it’s ineffective: 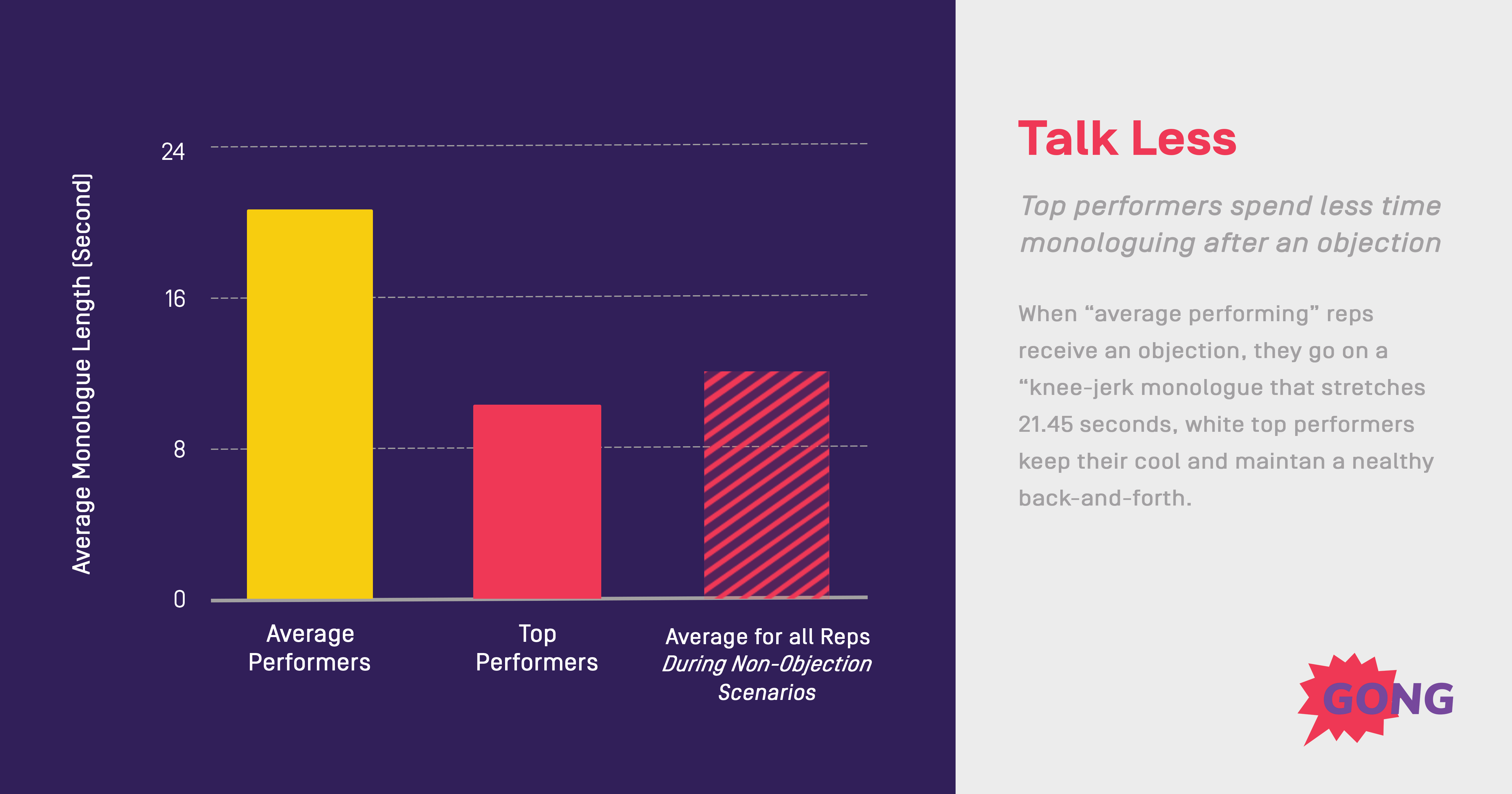 They jump in to save the day and only make things worse.

They frustrate the prospect and come off looking like they weren’t paying attention.

And there’s such an easy solve on this one. Responding in this thoughtful, inquisitive way will help you have a better conversation.

It’ll create more back-and-forth flow, even when an objection is raised: 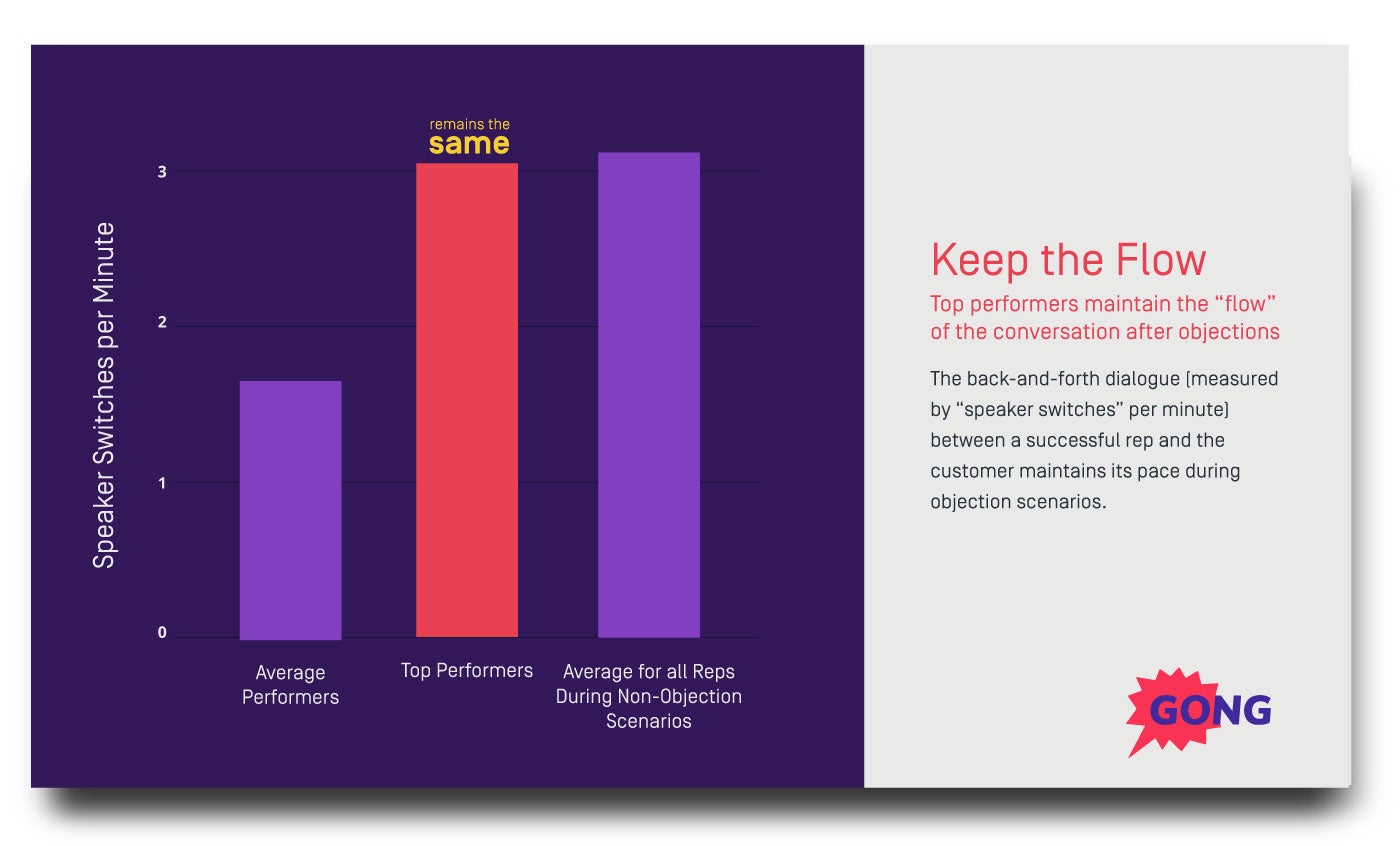 Once you’ve handled the objection appropriately, bring closure by asking, “Does that make sense?”

Plenty of reps loathe it, but the data has spoken.

Get it into your repertoire, cause it works.

Top-performing reps don’t use it more often than anyone else, but they do use it at three points in the conversation:

It can help you close the loop and move to the next phase.

(P.S. Click the banner below to get our free, printable Objection Handling Cheat Sheet):

Unsuccessful demos are all over the map, but often talk about pricing way too early in the call:

It shouldn’t take you more than a minute or two at the end of a call to explain your pricing to a prospect.

If it does, you need to streamline your explanation.

Once you’ve covered pricing, your final discussion on this call should be about next steps. 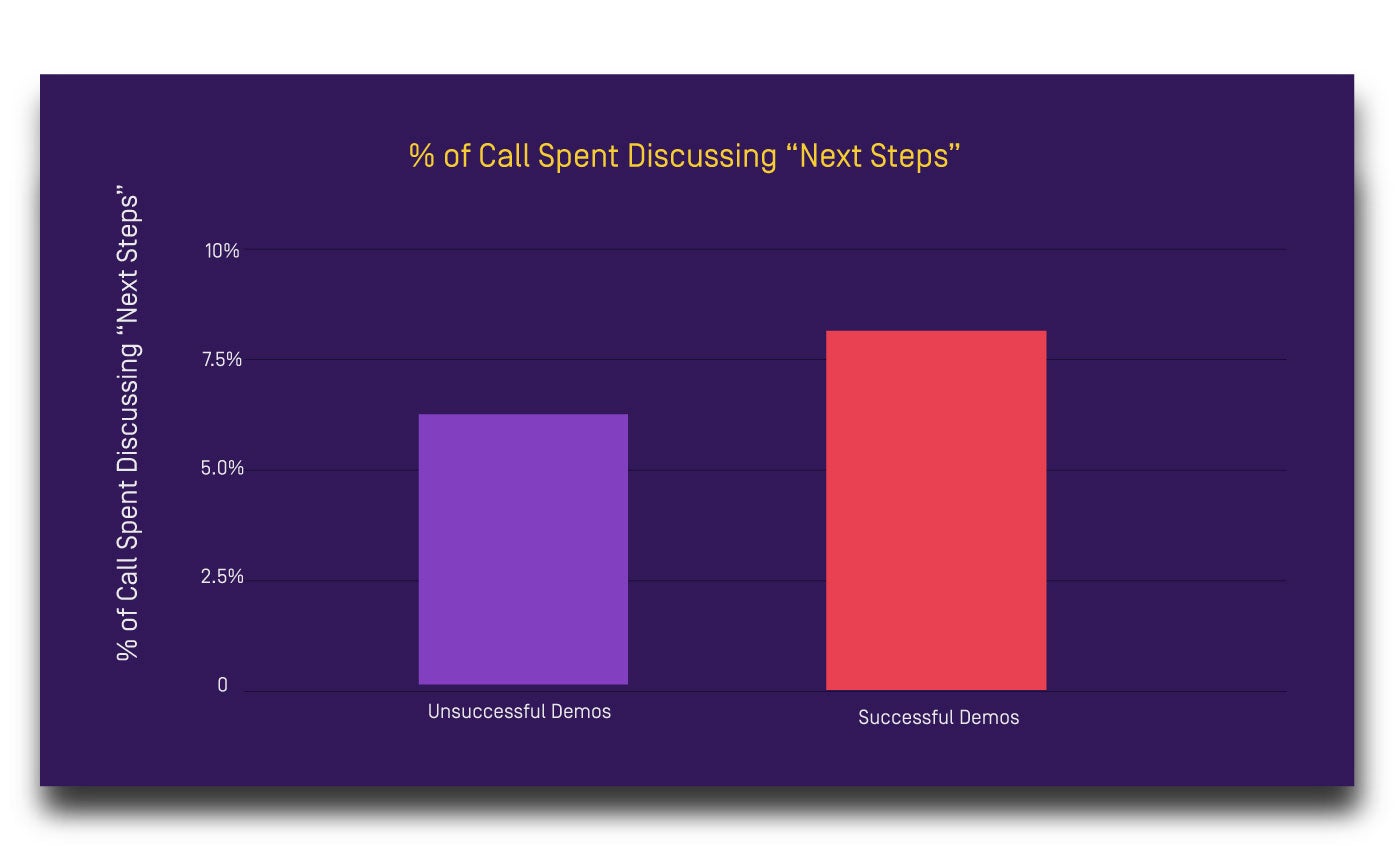 They know it’s incredibly important to talk with the prospect about how to move the project forward together.

Pro tip: Shorten your pitch and leave yourself enough time to work through next steps without rushing.

You don’t want to talk about critical next steps when your prospect is rushing to get to their next meeting.

Whether it’s a cold call, or you’re getting ready to close a deal, every conversation should follow pre-planned sales call steps that are meant to increase the likelihood of a desired result.