In the Gong Labs series, we publish data from analyzing sales calls with natural language processing and AI. Subscribe here for future research.

Five of them are intuitive.

The sixth one, not so much.

We pulled 67,149 call recordings from our database of over 1M calls.

And we analyzed them with machine learning.

The calls in this 67k subset were all demos done over screen sharing platforms.

Each demo was recorded, transcribed, and analyzed to identify the behaviors that correlate with success.

The original goal was to identify the “anatomy of a winning sales demo.”

But we also noticed some interesting objection handling trends.

In other words, the original study revealed nine things star reps do during their demos.

But it also showed us six things they do to handle objections during those demos.

When In Doubt, Pause

It’s what successful reps do upon getting an objection.

We measured the average length star reps pause after getting an objection, compared to their peers.

When it comes to reacting to objections, successful reps have a polar opposite response than their peers: 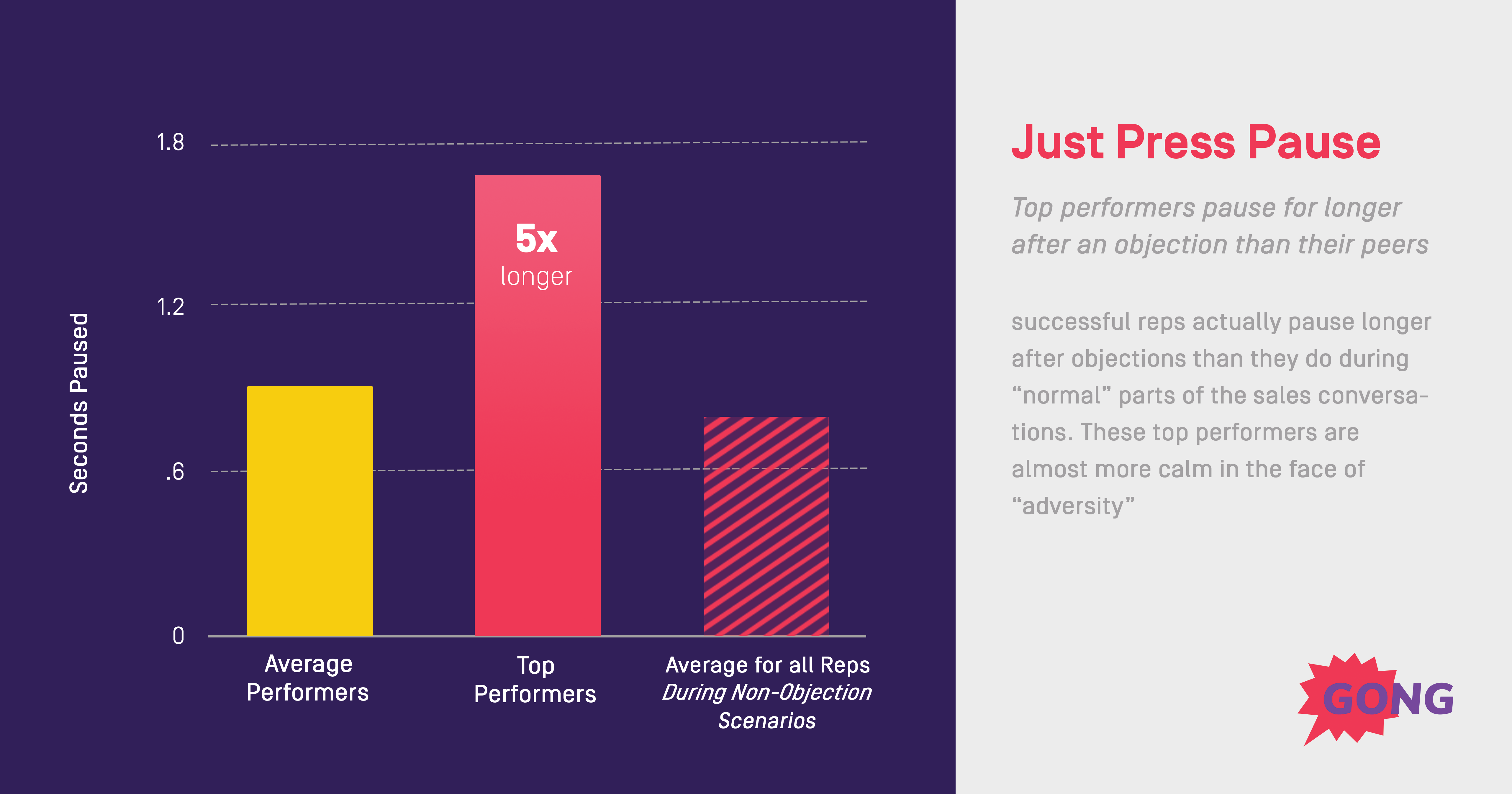 Successful sellers actually pause longer after objections than they do during “normal” parts of the sales conversation.

They are calmer in the face of “adversity.”

It’s like objections trigger them to go into slow motion.

Their average-performing peers, by contrast, get “riled up.”

The length of time they pause plummets after getting an objection.

They practically interrupt their customer while answering the objection.

They’re so eager to “rebuttal” that they pounce on the customer.

Speaking of getting riled up, average reps also speak a bit faster after getting an objection 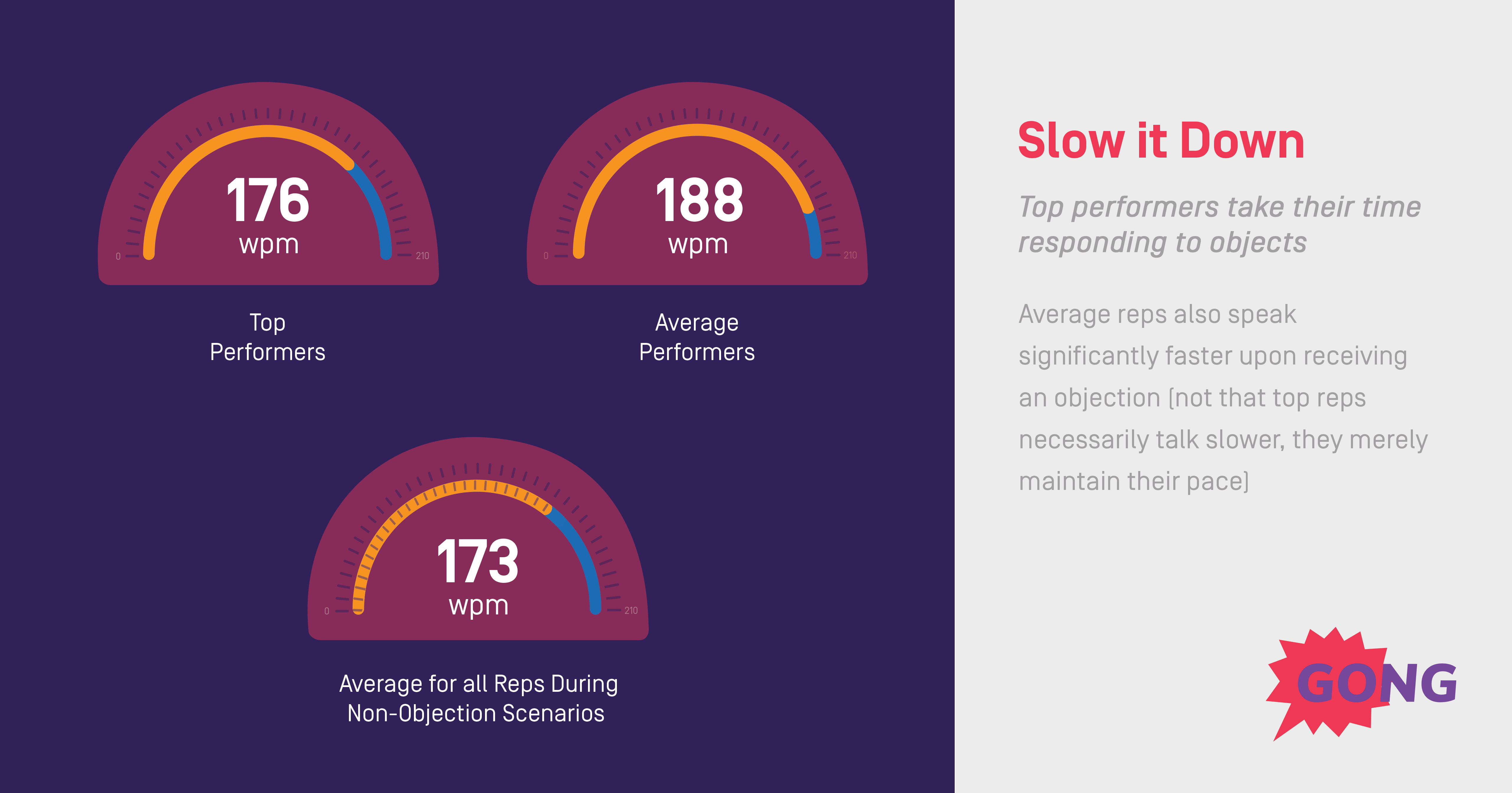 The Fewer Words, the Better

When “average reps” get an objection, they go on a “knee-jerk” monologue that stretches 21.45 seconds.

Objections trigger insecurity for below-quota reps: an overt need to set the record straight.

This manifests itself in long, uninterrupted talking: 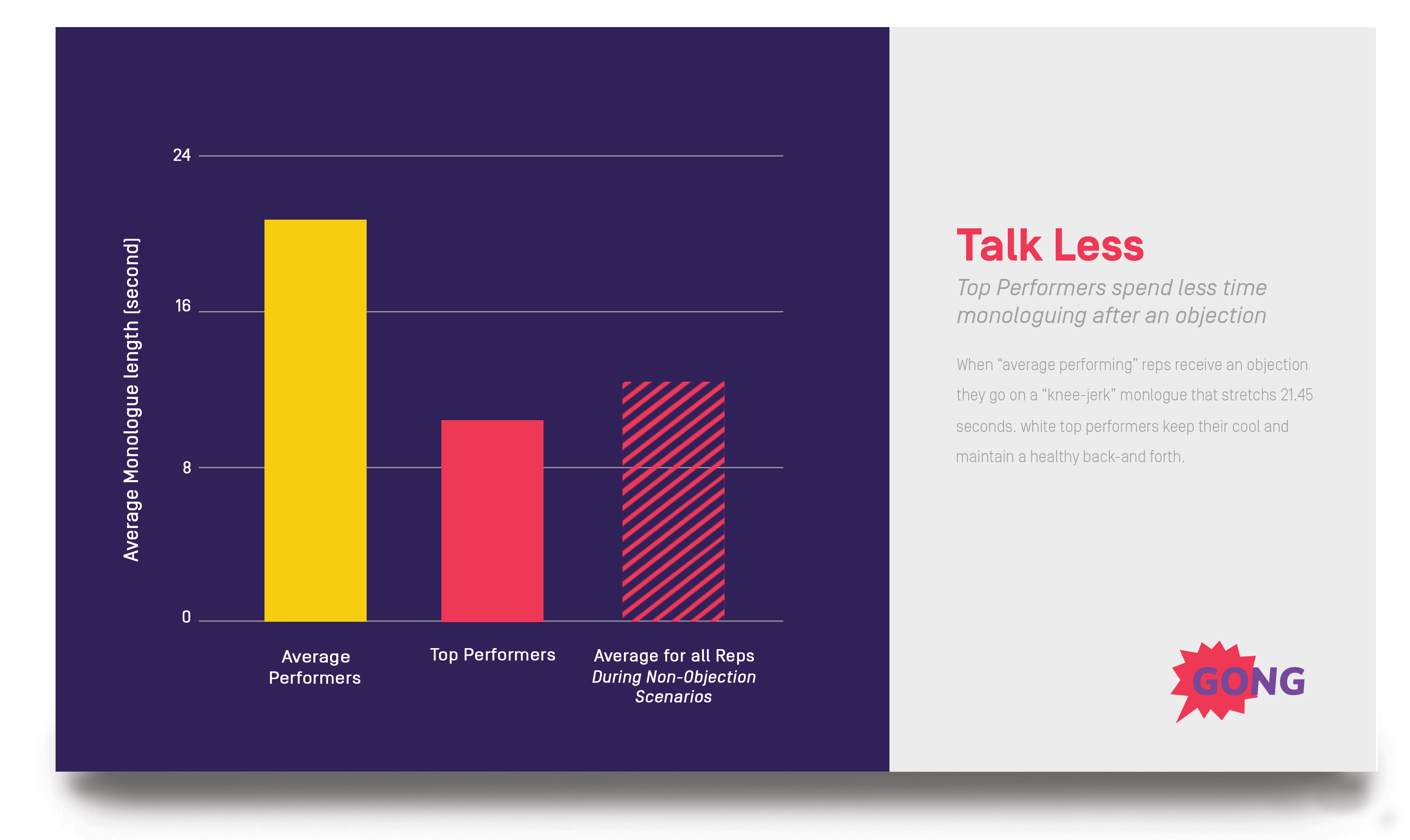 When you “x-ray” the objection portion of the conversation of an average rep, it might look something like this:

Objection scenarios are rife with misunderstanding.

Average sellers are so eager to overcome objections, they end up addressing the wrong issue.

Take note: a strong answer to the wrong objection makes the objection worse.

Successful sales reps avoid this friction by responding to objections by asking questions: 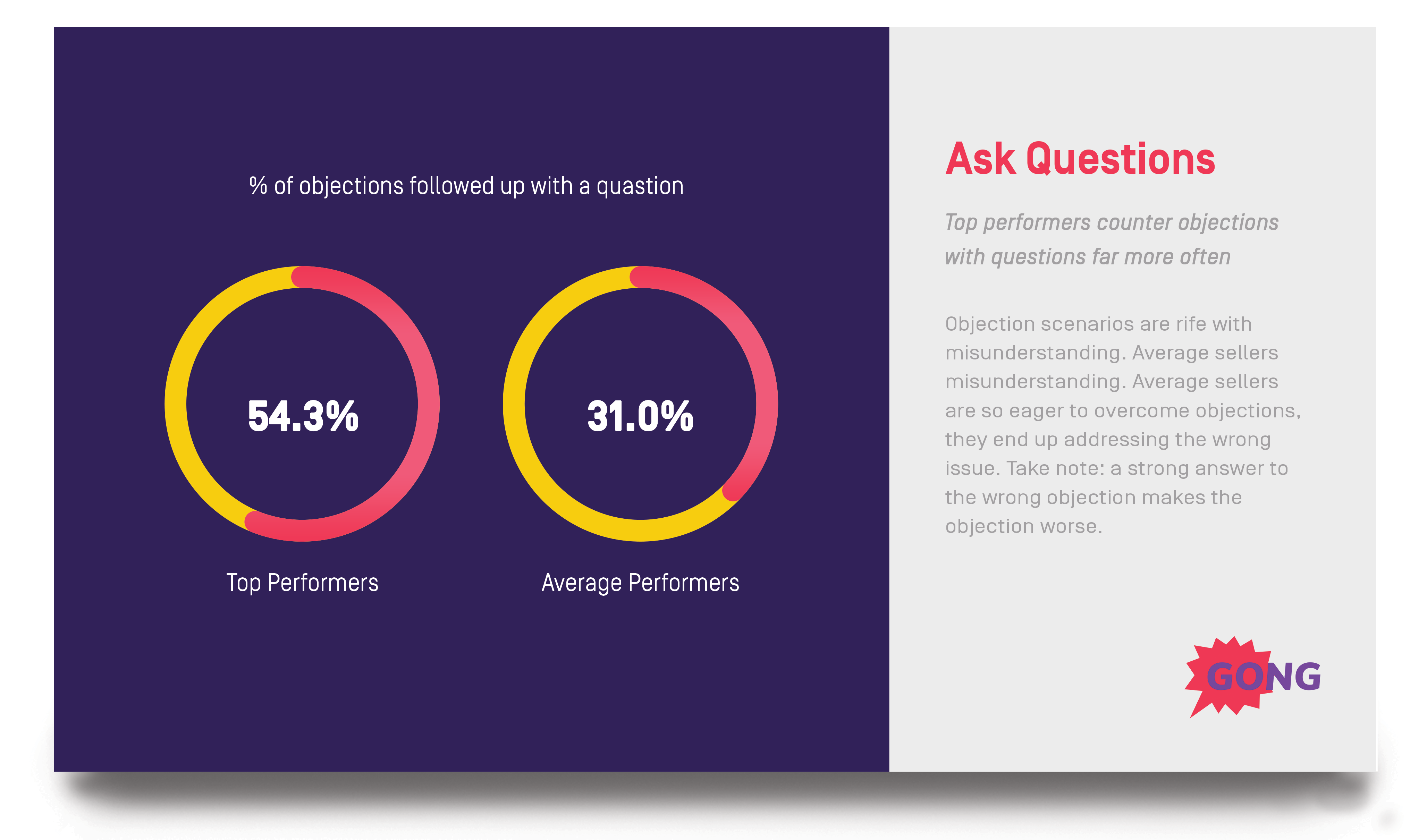 They don’t automatically assume they understand the concern.

In doing so, they are more likely to address the objection accurately.

Have a Conversation, Not a Debate

Successful reps actually don’t do anything special for this next data point.

They maintain the “flow” of the conversation, rather than reacting in a drastic way.

The back-and-forth dialogue (measured by “speaker switches” per minute) between a successful rep and the customer maintains its pace during objection scenarios: 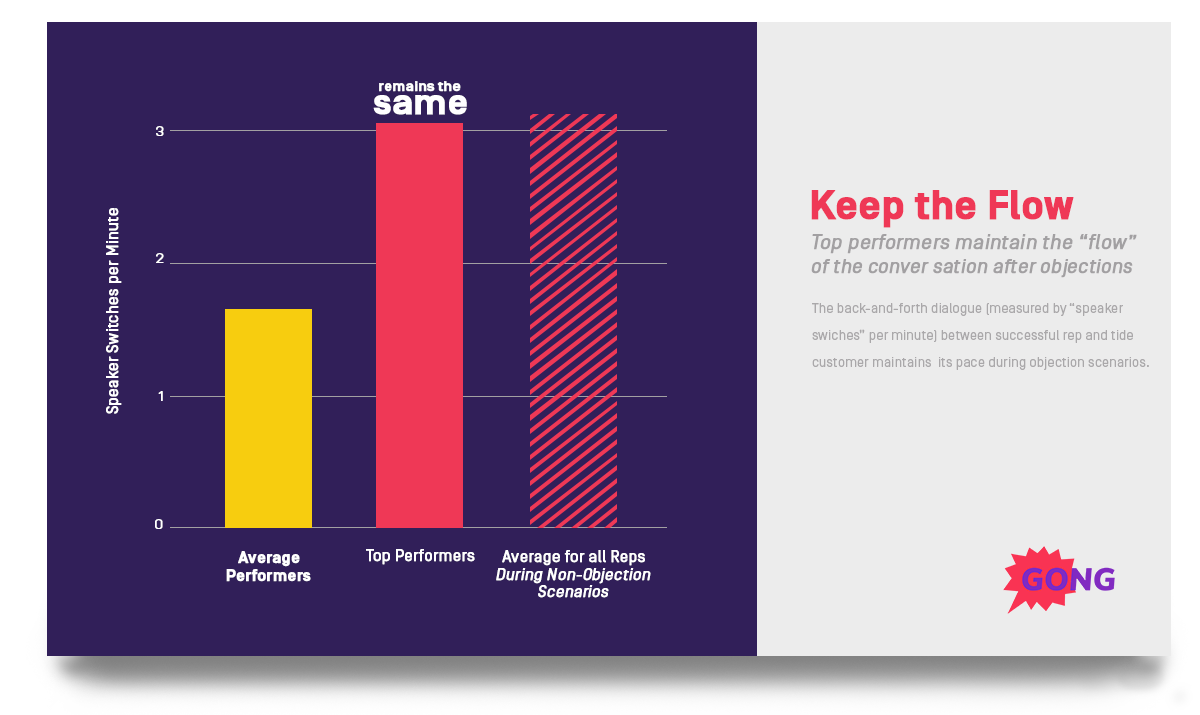 It’s as if the objection wasn’t a hiccup in the conversation at all.

For average reps, the pace of back-and-forth dialogue drops dramatically: A tell-tale sign of a disengaged conversation.

Note that this data point is likely just the byproduct of the earlier data point: Monologues.

Close the Objection By Asking This Cringe-Worthy Question

Star sales reps frequently wrap-up their response to objections with a variation of this language:

“Does that make sense?”

Some of us loathe that question.

Others use it lavishly.

But regardless of our own feelings, the data has spoken (albeit, with correlation, not causation to be sure).

Even though star sales reps don’t use the above question more frequently than their peers in total, they do ask it more often during three specific topics:

Successful sales reps may not use that phrase often during “regular” parts of their sales conversations.

But they seem to rely on it as a way to close the loop with objections.

(Read more about our analysis of “Does that make sense” here).

Fill In the Rest of the Picture By Commenting

I wish I could tell you the exact combination of words to say to overcome every objection.

But the truth is:

Even though sales is becoming more data-driven every day, many of the qualitative aspects will always exist.

So I’m turning to you for that part:

What qualitative aspects of objection handling did this data leave out?

Write them in the comments below.

Want more stats like these? Subscribe to the Gong.io blog to receive sales data and insights that will help you drive quota attainment across your team.