How can you use data to build and iterate your go-to-market strategy?

What’s the number one mistake made at annual sales kickoffs?

What are the top qualities of a great sales rep?

On a recent episode of the Reveal podcast, we connected with SVP Global Sales at HackerOne, Marjorie Janiewicz, for answers to these and other questions that are top of mind for revenue leaders.

Focus on Culture and Communication

For me, the first big objective was to have a vision of what the sales team and processes would look like over time. And try to make some investments either in people, process, or systems sooner rather than later.

The other component was also making sure that we have our hiring profile quite nailed at the beginning. So the type of people you bring on today may be people that can help you scale the sales team over time. So having a good idea of the culture we want to create, and therefore the type of people you want to bring in as early as possible.

Also, having a consistent framework to create a common language between Sales and Marketing. We did that quite early at HackerOne, so that from the beginning, the voice of the customer and the prospect is the core of our framework and the way we go to market. Not only in Sales, but across all very important departments at HackerOne.

The Qualities of a Great Sales Rep

So making sure that we had folks that were hungry and driven. But most importantly people that were very much mission driven. That believed in what we were going to be doing for the world—our mission is to make the Internet safer. This has really helped us differentiate ourselves against our competition in the market.

Having reps that are really there to problem solve with our customers. Creating a new industry, because hacker-powered security didn’t really exist before HackerOne started the business. A lot of those folks today over the last four years have been promoted to leadership or higher segments in the organization. And sometimes salespeople are very coin operated, which is great. But if you match that to being mission driven and wanting to build a great company, I think you get magic in the end. 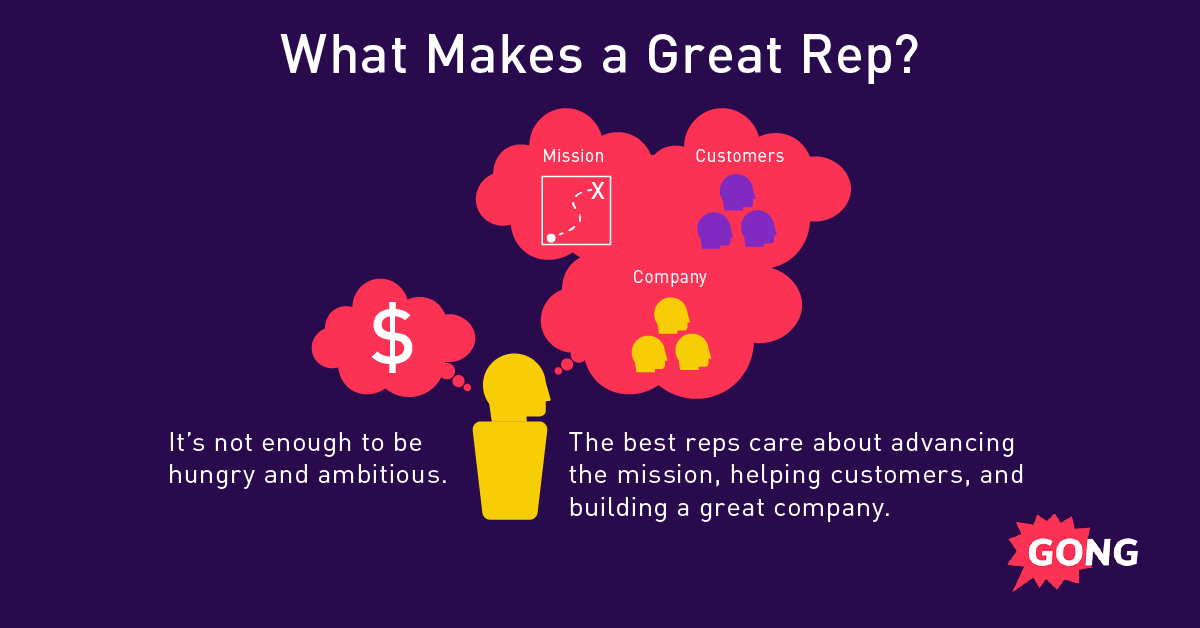 I think over time, everybody gets a little bit more intelligent about how they use metrics. Maybe there’s a secret sauce, but I think it’s more of a continuous learning than a kind of an ideal state.

So we always start from the basic metrics of number of deals, ASP, number of accounts, targeted time to close, and all of that. I think where a lot of the continuous learning is coming from is starting to understand where the pipeline is coming from, and how do we start having predictability in that conversion from pipeline to opportunities to deals based on different sources. So adding a lot of systems to help us get there.

We’re transitioning towards account-based marketing and selling. So I think with that, the type of metrics we look at are a little bit different. And also there’s a lot of reflecting back between the metrics we had planned for this year and where we landed. Trying to understand how more predictable we can get over time.

We’ve added a ton of tools at every step of the process to help us get more visibility. We spent a lot of time in the past six months guiding the sales managers on what data to look for where and when, so that we don’t get overwhelmed by that massive amount of data we get nowadays. So it’s an elegant dance between using data, but also being agile and changing how we use those metrics to drive decisions.

Having that mutual place to run sales analytics is great, because then you kind of eliminate the bias of having Sales looking at its own data.

Marjorie mentioned a specific focus on being customer-centric. So, what does that mean to you? By definition, customer-centric is an approach to doing business that focuses on providing a positive customer experience both at the point of sale and after the sale in order to drive profit and gain a competitive advantage.

It is easier said than done. And a lot of orgs strive for this, but how many are really executing against this principal?

So, in an effort to understand what types of cultures are associated with higher performance, we looked at data from CSO Insights’ 2018 Sales Performance Report, in which they asked sales leaders how they would describe their culture. Of the top performing sales orgs, 50% identified themselves as “customer-centric.” Compare this to only 20% of the lowest performing orgs.

So it’s safe to conclude that aligning your sales process with your customer’s path—and not the other way around—is specifically important to maximize both revenue and customer satisfaction.

The Real Purpose of an SKO

What I’ve learned over the years is the purpose of the SKO is to bring the sales team together. I think the worst mistake that I’ve seen made, and I’ve made myself, is using an SKO as just that moment in time where you blast 150 slides to the sales team, saying, “Here we go! This is the new product. This is the new value prop. Just go at it.”

We are using the SKO more as a way to get people engaged, and it’s a very collaborative couple of days. There’s not that much “death by PowerPoint” where we just push out the new training. It’s actually leveraging either customers coming on-site to share their stories, or reps sharing their wins or their losses. A lot of collaborative sessions that happen during an SKO. So what this means is a lot of the practical trainings around new pricing, new product, actually happens before that. We have monthly enablement calls on top of our normal boot camp.

The SKO then becomes an occasion to just talk live, having people sharing, having customers sharing. So that kind of SKO becomes the practice versus the theory. 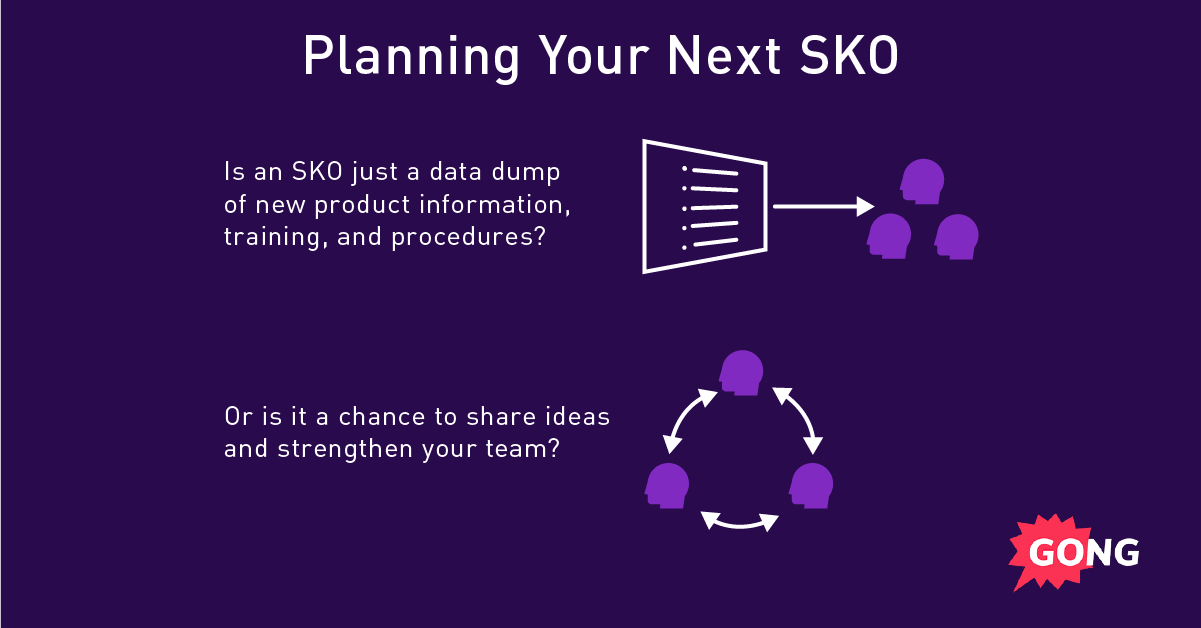 I think a lot of the “field versus inside sales” divisions are kind of becoming blurry, and reps at the end of the day are becoming more hybrid reps. It’s more about the segment and how you go to market in that segment. If you can sell on the phone, you can sell anywhere, anytime.

So if you have that as the core, I think the coaching becomes more on the basics with the folks that are a little bit earlier in their careers. The components of selling is what you’re teaching the reps. For the reps that are a little bit more experienced, you’re trying to coach them on how to unlock their deals. So the culture of feedback is just here every single day, which I think for people that have stopped learning—it can be a little bit depressing. So we try to hire people that still have that in their bellies.

It’s even more important for us because we are building a new industry. It’s not like we’re asking people to sell something that they’ve sold before. So it’s very important to keep an open eye and open ears on what the market is telling us.

I think there’s not only the coaching side, but making sure the reps are actually curious enough, regardless of their levels, to understand what works and what doesn’t. Because nobody has done hacker-powered security before. So we also take that feedback from their side to enrich our messaging, our go-to-market, etc.

The number one skill is just to always have a nose for the business problem you’re trying to address.