WARNING: THE FOLLOWING ARTICLE DEALS WITH PSYCHOLOGY, THE SCIENCE OF MIND AND BEHAVIOR.

Specifically, we’ll be diving into behavioral economics, “the study of psychology as it relates to the economic decision-making processes of individuals and institutions” (Investopedia).

The headline kinda gives it away, but in case you missed it, today we’ll be talking about loss aversion.

“Loss aversion in behavioral economics refers to a phenomenon where a real or potential loss is perceived by individuals as psychologically or emotionally more severe than an equivalent gain” (again Investopedia).

Before you ask, “But wait, you just provided two definitions, both from the same financial website. What does finance (and psychology and behavioral economics) have to do with sales?”

The answer: EVERYTHING, of course.

You see, the best salespeople understand the science of mind and behavior (aka, psychology) as well as a thing or two about behavioral economics.

Top reps don’t lead with benefits or features. Instead, they start with the current state and explain why this status quo is not working (and needs to change). THEN, get to the benefits their solution offers.

A-team sales reps use loss aversion to create a sense of urgency.

Here is how it’s done.

But first, what is loss aversion?

L​​oss aversion is the theory that says people prefer avoiding loss to acquiring the same amount of “gain.”

The fear of losing (kinda like FOMO) far outweighs the joy of winning.

We discussed loss aversion in more detail during this podcast.

According to this Masterclass article, loss aversion comes in three different flavors:

As a risk management analyst, Reuben’s job is to assess risk. Risk-averse folks, like Reuben, prefer low uncertainty over high uncertainty, and most of his life (and relationship) decisions are dictated by this aversion to risk.

Risk aversion is often a manifestation of loss aversion — when the odds of winning are the same as the odds of losing (even if winning would result in a higher payout), many people see the  “potential pain of a loss” as a barrier to “making a rational investment bet.”

Endowment effect: According to a 1991 Journal of Economic Perspectives article, “the endowment effect says that people often demand much more to give up an object than they would be willing to pay to acquire it.”

This graphic from The Decision Lab sums it up nicely: 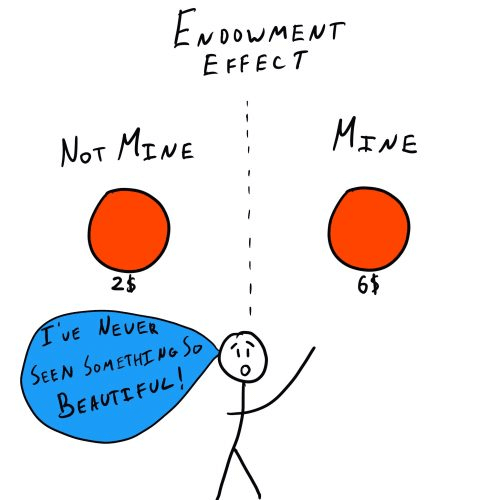 An example from the same 1991 article referenced above: Participants in a study were given a mug with the option to sell or trade it for pens (of equal value). The amount participants wanted to sell the mug once they owned it was ~2x the amount they were willing to pay for it initially.

Status quo bias: Resistance to change. Keeping things the way they are. Doing nothing. A preference to the current state. Inertia.

The status quo (what we are currently doing) is preferred to what we could be doing … which is often better!

Okay. Now that we have the psych stuff laid out let’s get into how loss aversion applies to sales.

Loss Aversion in your product demo

Focus your sales product demo on the pain points of the status quo.

I get it. You want to lead with benefits and features and all the bells and whistles your product or service offers.

Features are easy to talk about (and show).

Your job is to convince your buyer the status quo is no longer an option.

Once you do that, they are one step closer to making a switch, leaving the status quo … for your service.

This is where loss aversion comes into play. Once you convince your prospect that the status quo means more pain and discomfort, the more likely they will turn to you to help them.

Steve Jobs used to be brilliant at this tactic. In his 2007 MacWorld keynote (worth the 80-minutes of your day) where he introduced the iPhone, Jobs famously said, “The most advanced phones are called smartphones (so they say).”

He followed that statement by proclaiming that smartphones are not so smart and not so easy to use.

Jobs shatters the status quo with this powerful statement combined with a spot-on, easy-to-understand visual. 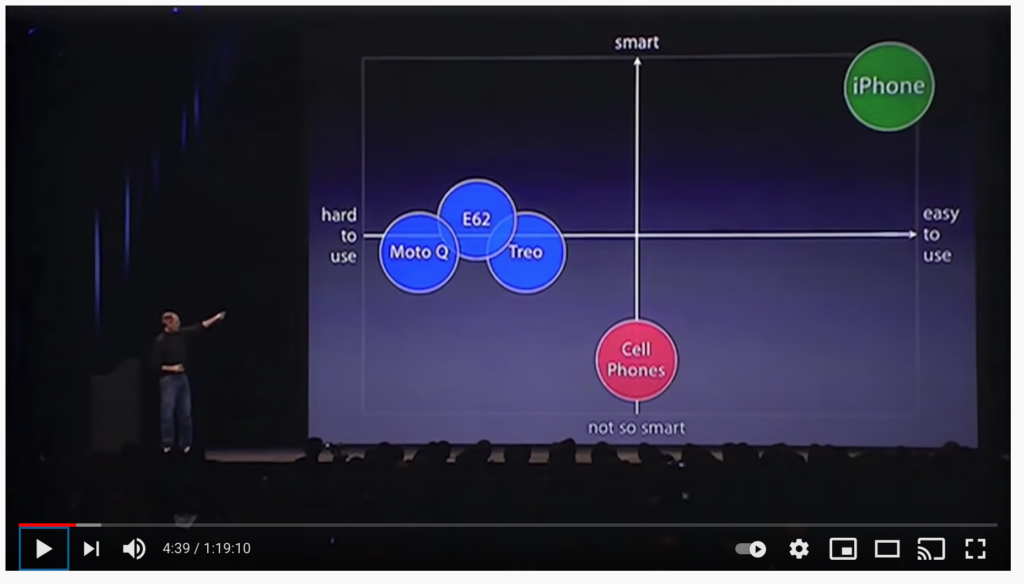 On your sales product demos, come right out and highlight the dangers of the status quo.

Show your buyer that their current state (the status quo) is unsustainable, not working … and you are more likely to get them to show interest in your product.

Remember: Loss aversion means people go to more extraordinary lengths to avoid losses than they do to gain benefits. 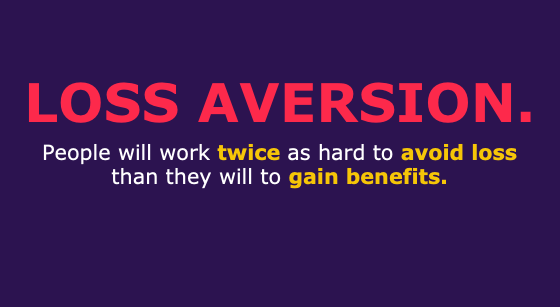 Convince your buyer if they remain in the status quo, they’ll incur losses. Try using a “loss pitch” like the one below — much more effective than a benefits pitch. 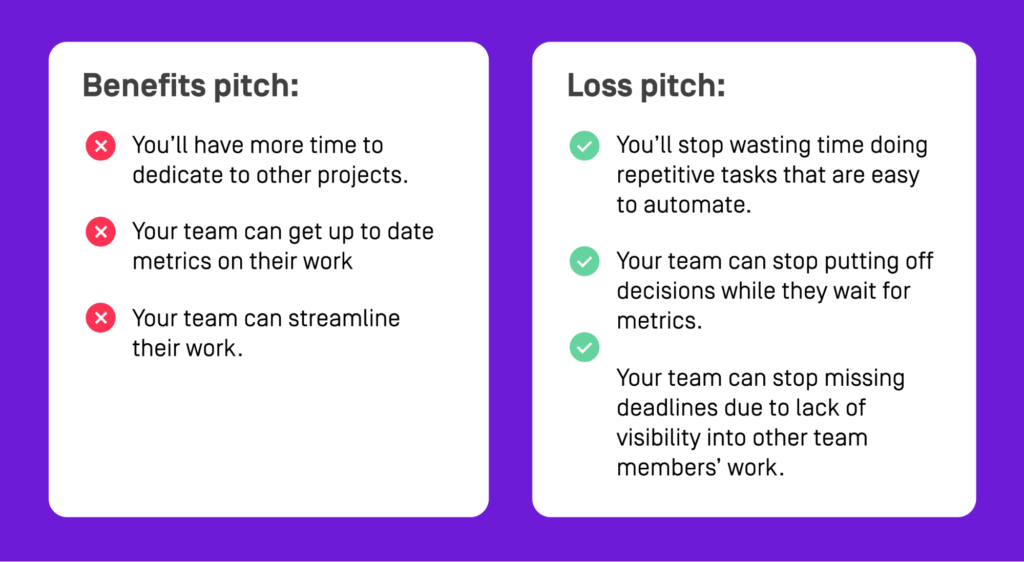 Loss Aversion in your cold emails

Cold emails can be tricky, but they don’t have to be … especially if you pepper them with loss aversion tactics.

An email subject line is an excellent opportunity to leverage this type of psychology. Example subject lines include:

Then open with a loss aversion-fueled question such as: Is [INSERT PAIN POINT] stopping your team from reaching your goals?

Loss Aversion when selling to the C-Suite

Selling to the C-Suite can be an entirely different ballgame.

Too often, newbie sales reps lead with a seemingly thought-provoking question like, “What is keeping you up at night?”

The problem with that question is you are doing information gathering — not ideal for a busy executive.

Instead, you should be leading with answers. You have done the work. You have put in the time and effort. You have the answer … to what is keeping them up at night. But, of course, that “thing” is a pain point your solution can solve.

Remember: Executives aren’t chomping at the bit to field a bunch of sales questions — ones you want to ask. Instead, they want sellers to know their pain points and alert them to threats they haven’t even thought of or undetected, hidden opportunities.

Challenge the status quo. Educate them about unforeseen trends that threaten their business, their status quo.

This type of persuasion tactic — loss aversion — creates urgency. Executives become driven with urgency when you show them how their current status quo is no longer viable.

TL;DR: When selling to the C-Suite, lead with insights, not information gathering.

You have the foundation, along with a few examples to truly leverage loss aversion to your advantage.

All you need now is some email templates.

You are in luck. We have 11 highly-persuasive sales email templates, many of which use loss aversion to move buyers along the sales cycle.

These “fill-in-the-blank templates will help with deals at every stage — from prospecting to closing. We’ve got you covered.