Selling is a zero-sum game. While you’re popping a champagne bottle because you know how to sell against the competition, your competitor is downing cheap whiskey to mourn their loss.

Either way, when the drinks are done, you’ll both go back to square one with the same goal:

Sending your competitors home with their tails between their legs.

To do that, you have to understand the first principle of competitive selling:

In other words, the skill does not lie in knowing the strategies.

The skill lies in knowing which strategies apply to which situations.

Our data makes that clear.

The data science team at Gong.io used AI to analyze 24,077 competitive deals and the sales conversations that span those deals.

Those conversations were recorded, transcribed, and analyzed with AI, then matched against their CRM opportunities so we could assess the results.

The database for this study included two types of selling organizations:

As you’ll see, the winning strategy is different for each situation.

Take a look at when the competition is discussed (on average) in a mature market sales cycle: 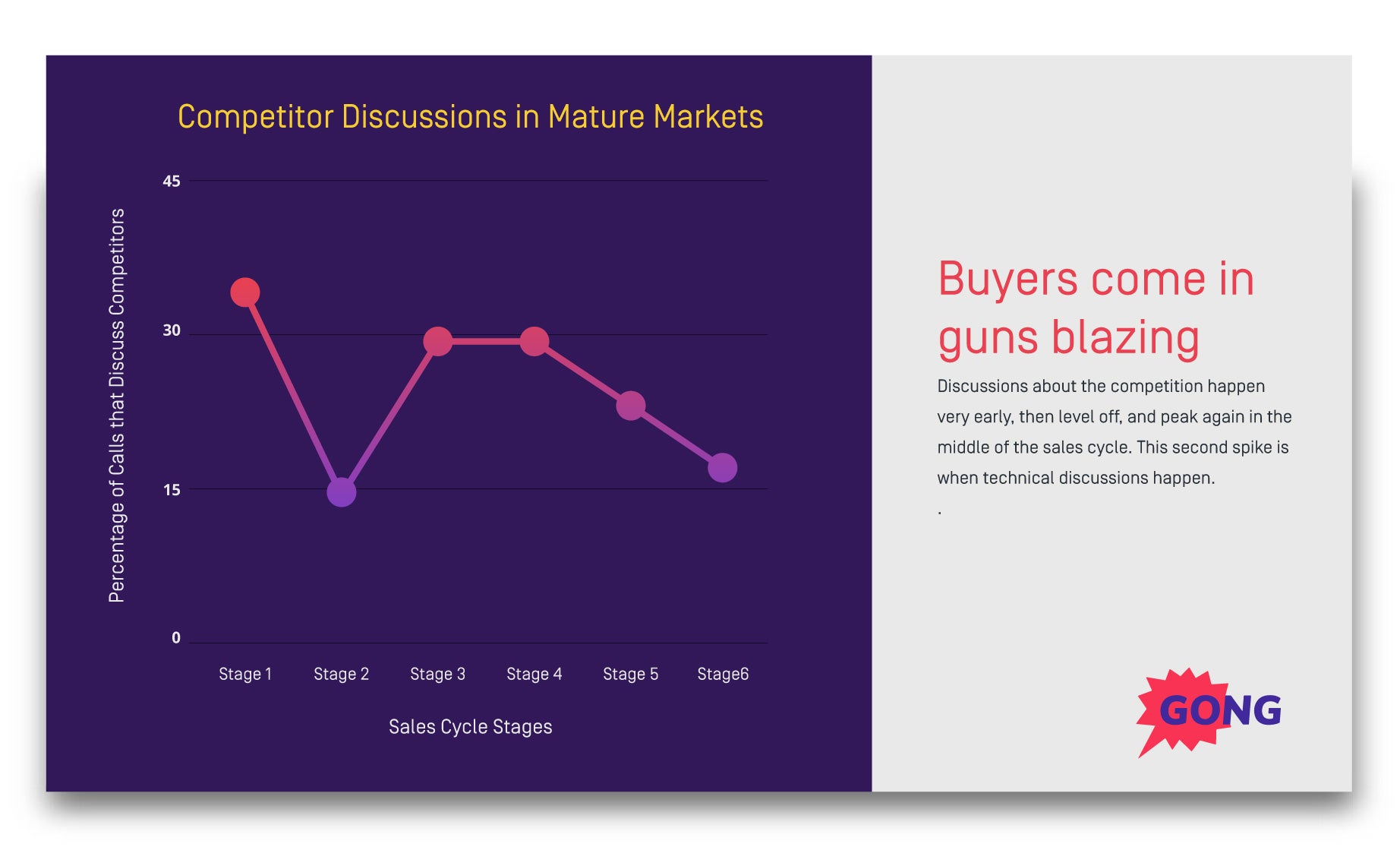 Discussions about the competition then level off, and peak again in the middle of the sales cycle during technical discussions.

They then diminish for the rest of the cycle until the deal is won or lost.

The competitive dynamics in new markets are very different: 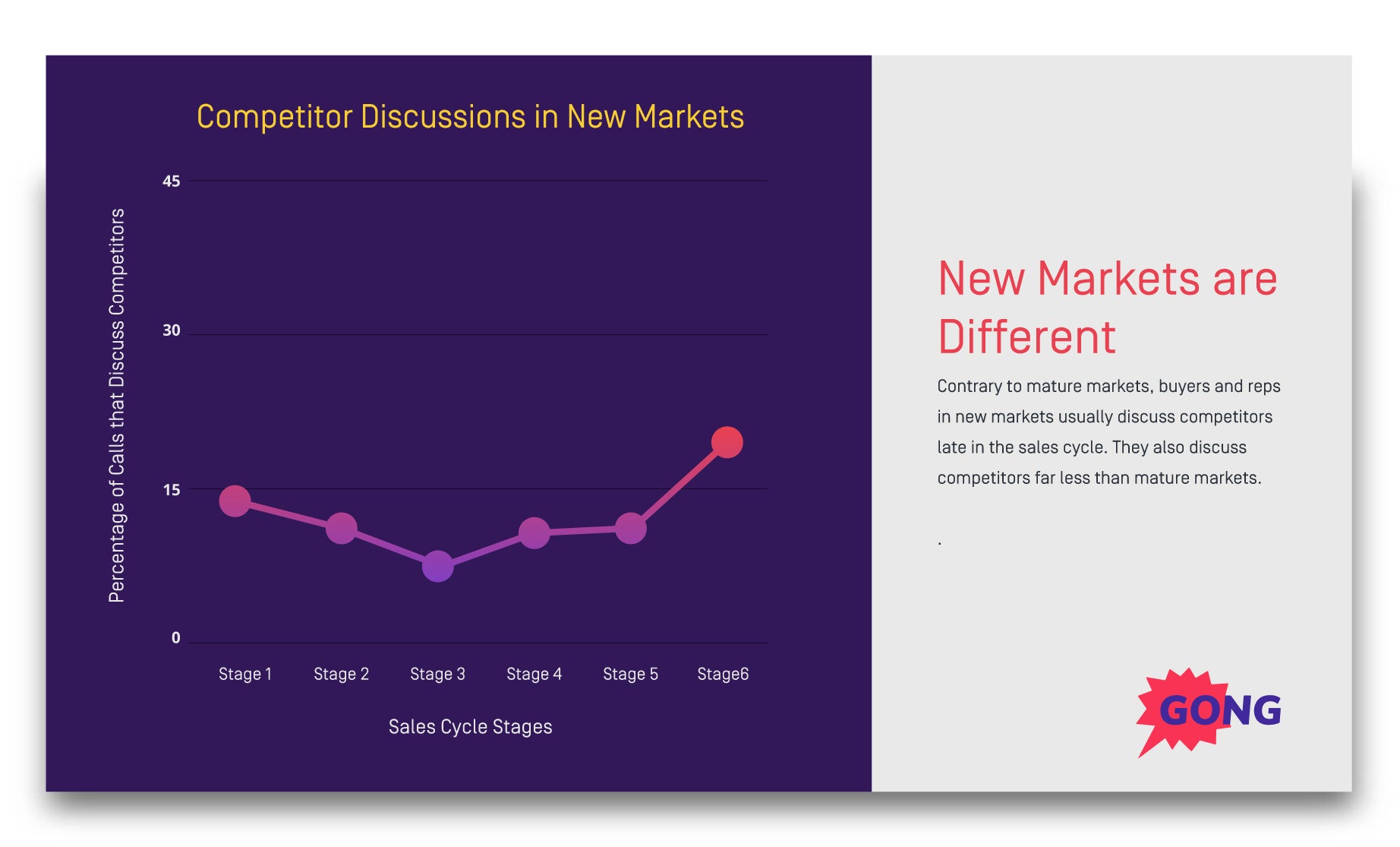 Competitor discussions get some activity early on, with a “competitive radio silence” that haunts the middle of the sales cycle.

Since the dynamics are so different in these two markets, the winning approach also has to be different.

Selling Against the Competition in Mature Markets

If you sell in a mature market, here’s your first rule of thumb:

Having a discussion about your competitors at any stage of the sales cycle reduces your odds of winning the deal, compared to if competitors were completely absent from your deal.

Except for one stage: 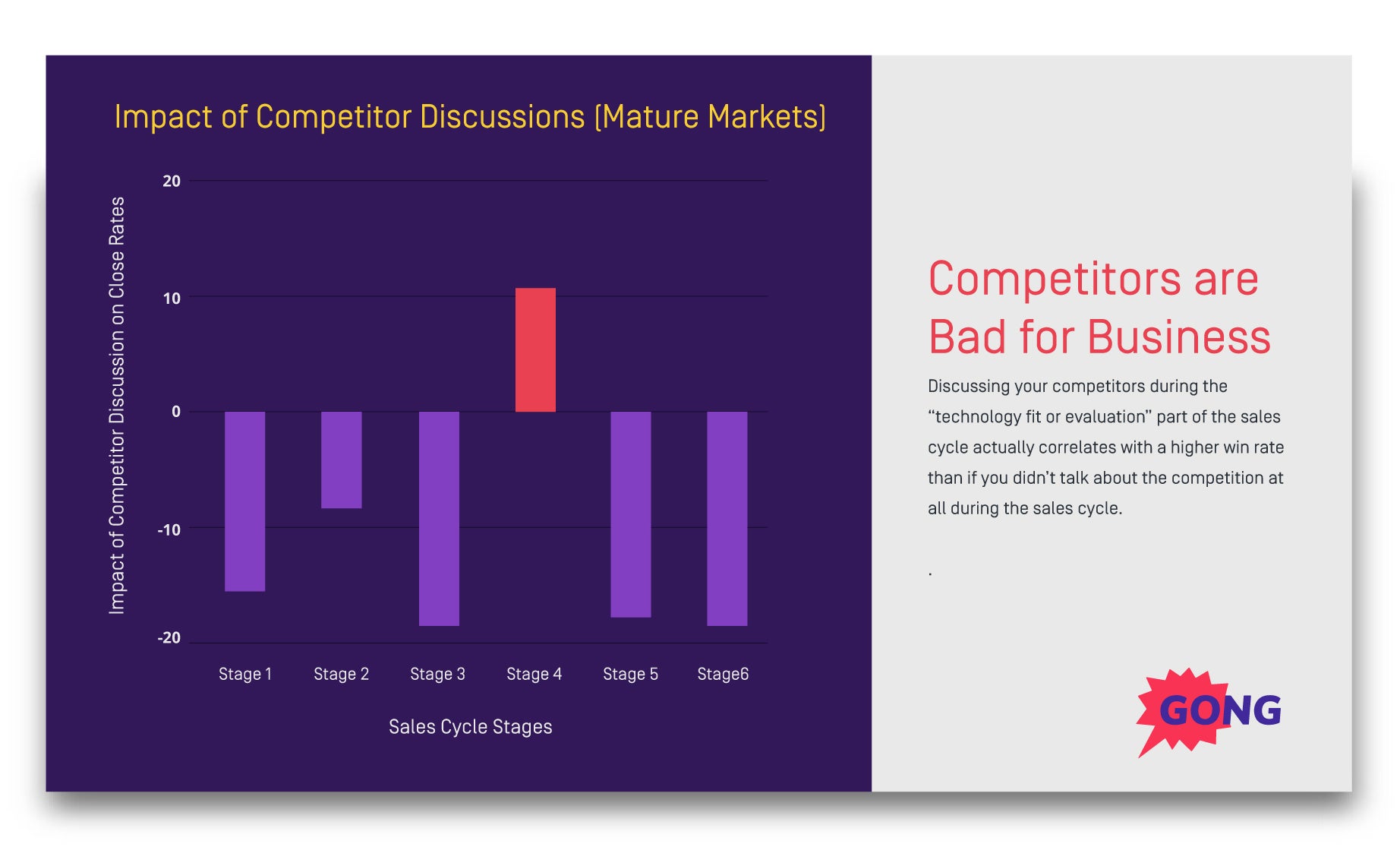 Discussing your competitors during the technology fit or evaluation part of the sales cycle actually correlates with a higher win rate than if the deal was absent from competitor discussions.

Every other stage correlates with a lower win rate than if the deal was absent from competitor discussions.

This tells us a few things.

In mature markets, the burden of differentiation falls on marketing, not just sales.

It’s marketing’s job to preempt the competition before the buyer enters the sales cycle. 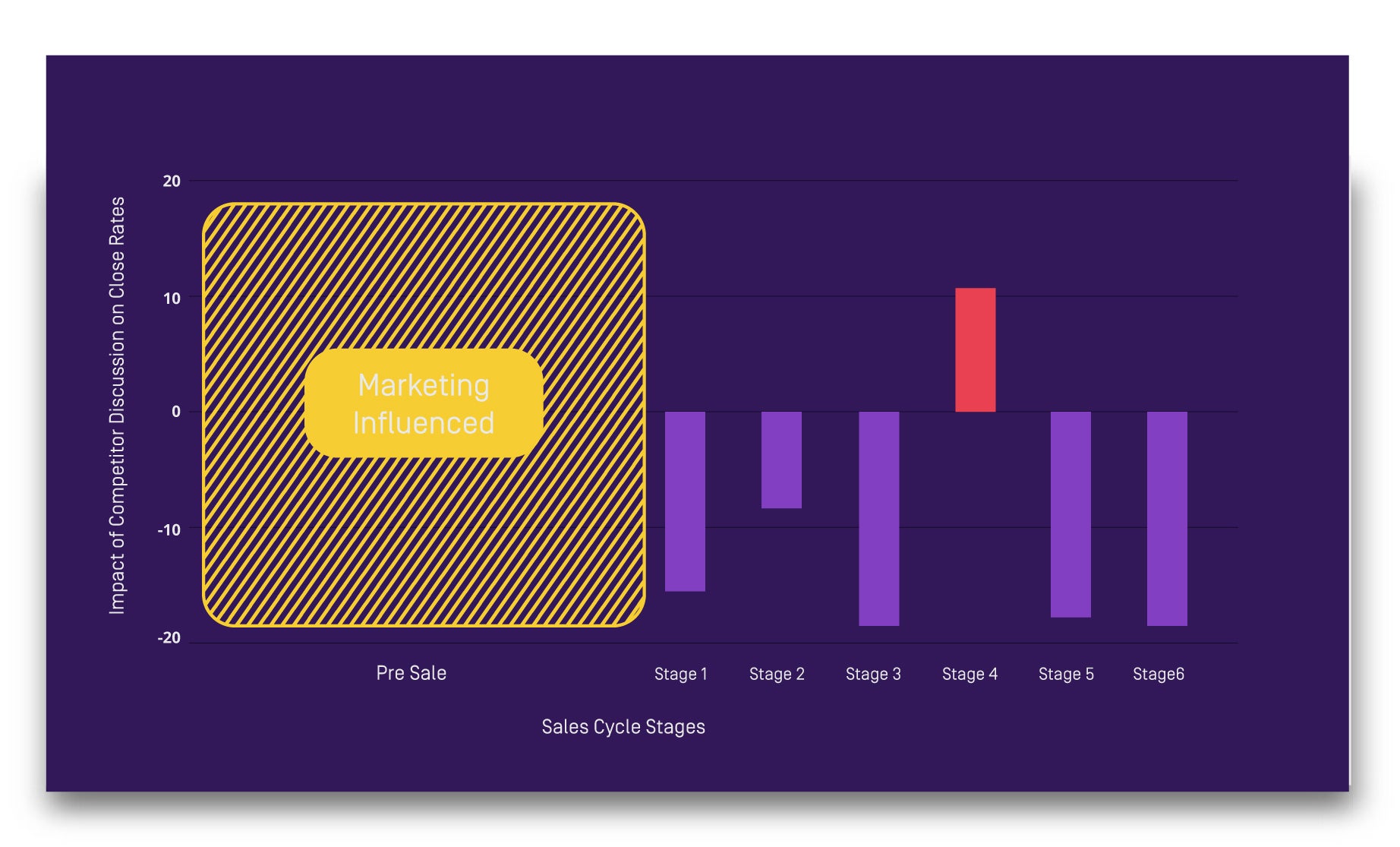 Marketing must win that battle before it begins.

Every marketing communication has to focus on a meaningful and unique selling proposition.

That way, buyers enter the sales cycle preferring you.

You Have One Good Shot at Winning

The second takeaway is that if marketing fails to preempt the competition (as they often will), you have one good shot at winning.

It happens in the middle of the sales cycle when the buyer takes a deep look at your technology with a scrutinizing eye: 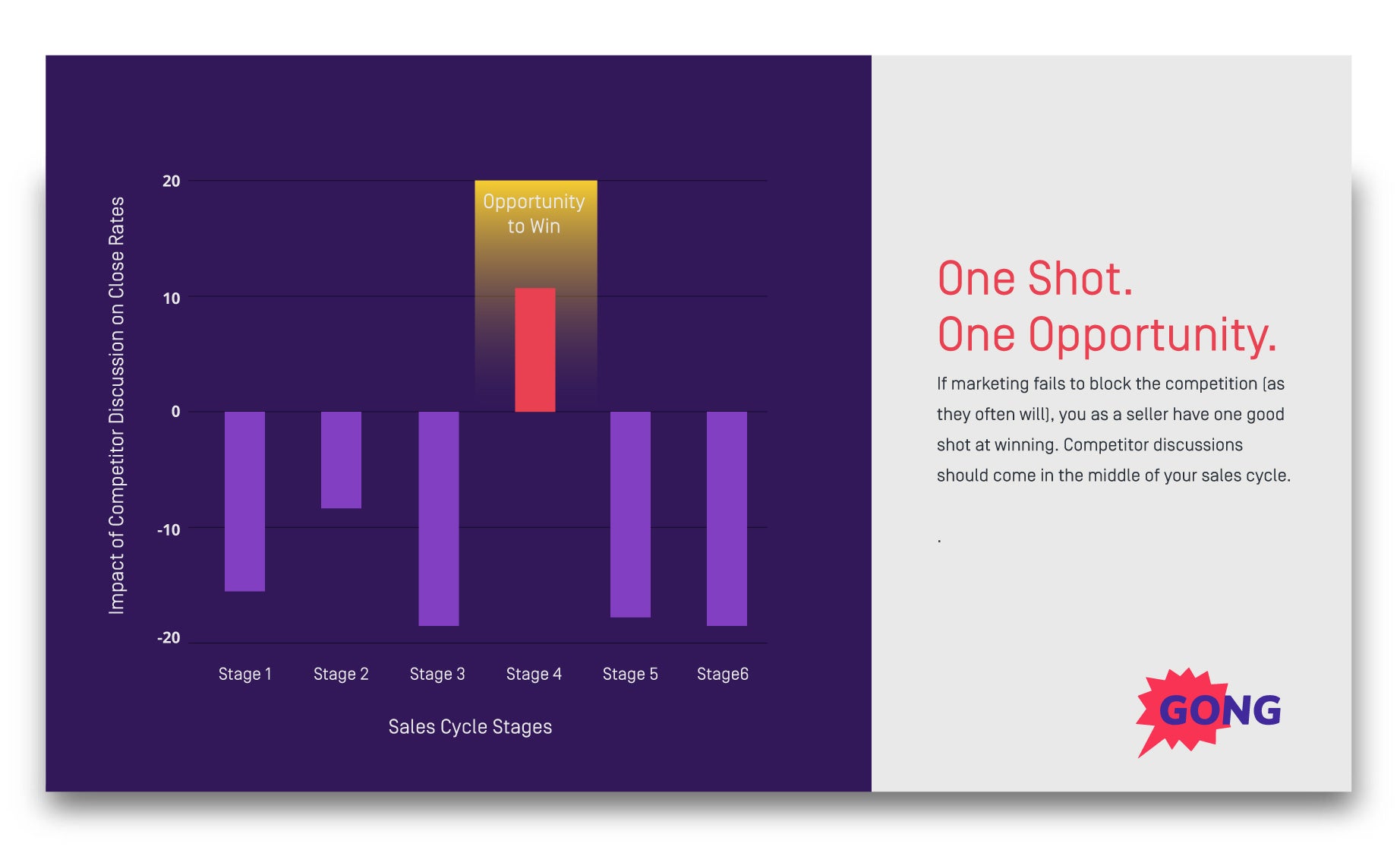 In mature markets all the products look identical to the untrained eye.

That’s part of what makes mature markets so tough.

You’re like the parent who’s able to tell the difference between their twin children with ease.

It’s not so easy for everyone else.

That includes your buyers evaluating multiple products that closely resemble each other.

So when your buyer in effect says, “Hey, I’m paying attention. Help me tell the difference here,” you’d better be armed with a powerful answer.

If you are, they’ll reward you with their business.

Another Strategy That Wins In Mature Markets

There’s another strategy the top sellers use to win competitive deals in mature markets.

I call it the “Clinger Strategy.”

Top sellers identify one thing their buyer values in their product over the competition.

Then they talk about it for the rest of the sales cycle, minimizing discussions that go outside of it (at least, during competitive conversations).

They cling to that critical issue as if their life — or deal — depends on it.

The AI we used for this analysis identified:

It turns out that top sellers test the waters the first time the competition comes up in the sales cycle.

That’s when they discuss a few topics around the competition.

But, in subsequent competitor discussions, top sellers zero in on the one topic that stood out as more important than the rest.

They bring the buyer back to that hot-button issue over and over whenever the competition comes up. 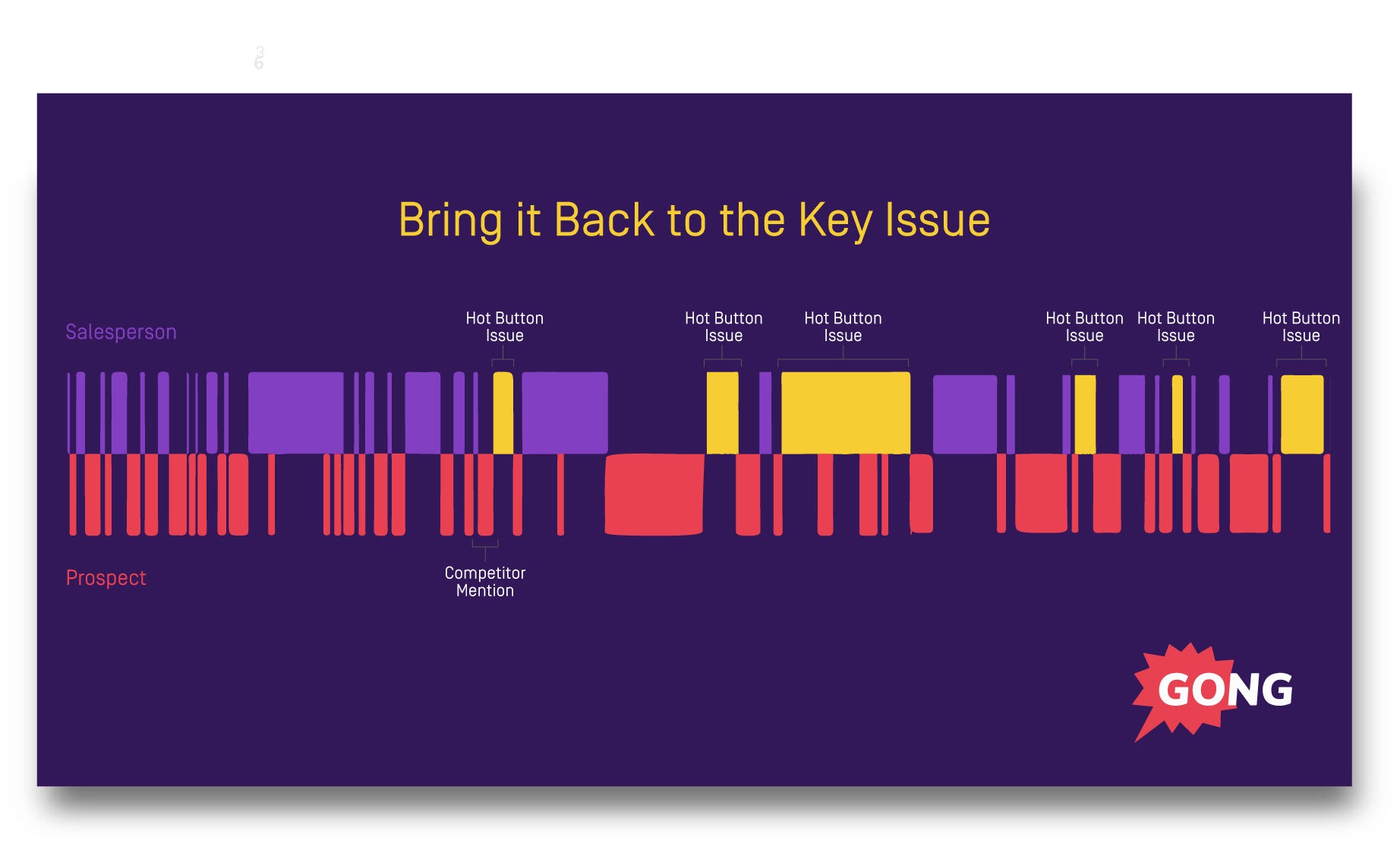 It’s as if a mention of their competitors triggers them to revert to that one winning topic.

By doing so, they continually reinforce favorable buying criteria.

By contrast, deals that are lost to competitors have no such pattern.

Those competitor conversations are scattered, sporadic, and diluted.

Their winning differentiator gets lost and they don’t gain an advantage in the conversation.

Trying to win with too many differentiators waters down your message.

When your buyer tries to recall how you’re different, they’ll be at a loss.

There was so much being communicated that nothing stuck.

Sticking with one thing plants it in their brain.

Selling Against the Competition in New Markets

Selling in a new market is different in that competitive deals are a good thing, provided you win the battle early in the sales cycle.

Discussing your competitors at the beginning of the sales cycle correlates with a 24% higher likelihood of closing the deal compared to not discussing the competition at all. 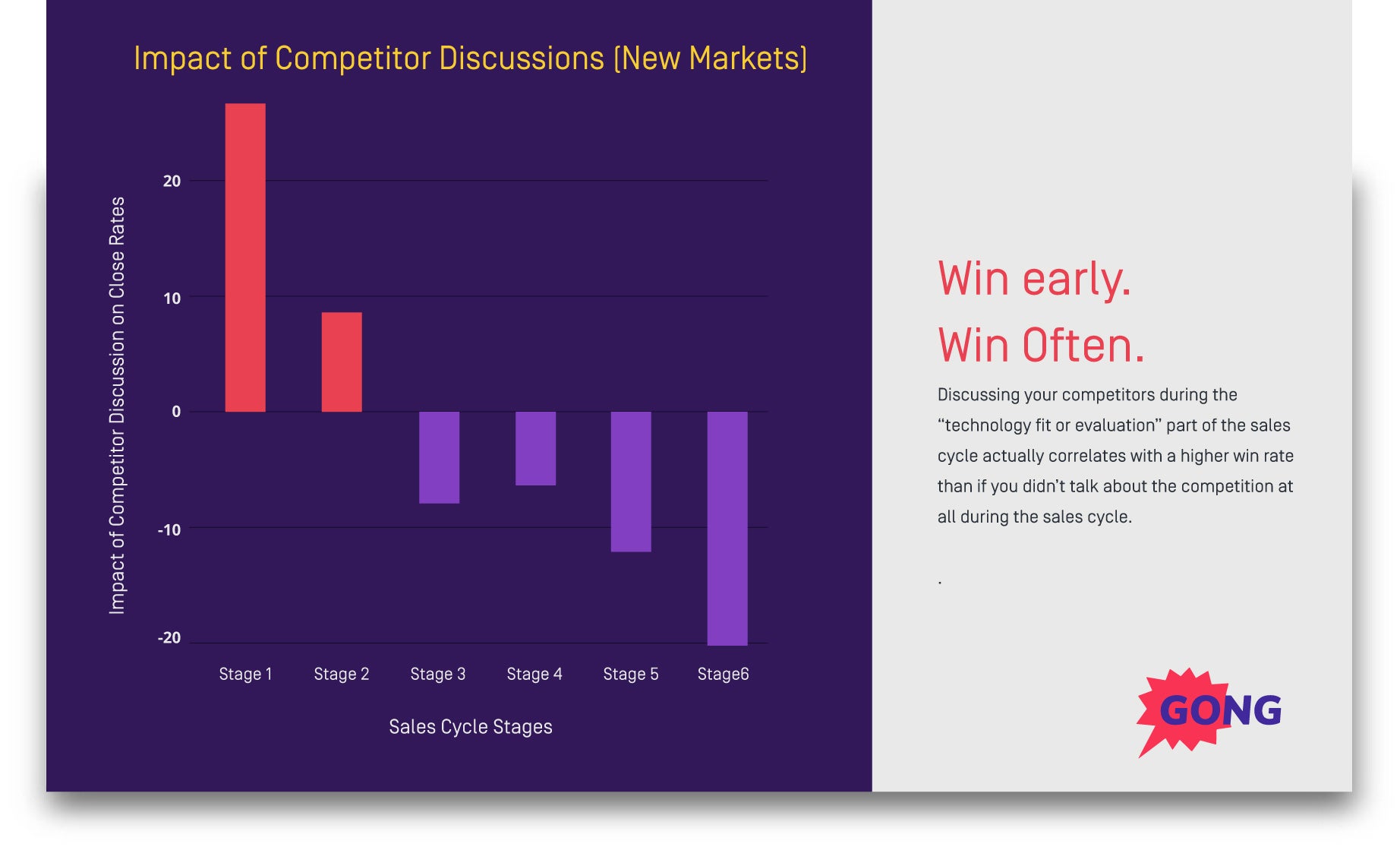 That said, your likelihood of closing a deal gradually diminishes when you discuss the competition at each subsequent stage of the sales cycle.

That trend continues until the final stage of the sales cycle.

By then, if you’re still having discussions about your competitors, you’re 20% less likely to struggle with your closing techniques than if your competitors were absent entirely.

Competitors in new markets are good.
BUT – you have to win the battle early on.

These buyers are educated.

They have a better understanding of the problem you solve, and have a high intent to buy.

Even though you hate that your competitors are in the game, it’s better than dealing with a buyer that’s never heard of you or your category.

It’s your job is to crystallize their buying criteria in your favor early on, before it’s too late.

Trying to change the trajectory of a deal late in the game is futile.

As they say, an ounce of prevention is worth a pound of cure.

The Strategy for Winning In New Markets

There’s one word that defines how the bestsellers win competitive deals early on:

As Geoffrey Moore explained in Crossing the Chasm:

What does that mean?

If you occupy the right position in your buyer’s mind, the rest of the game will unfold with ease.

Even though this is also true in a mature market, the difference is that the burden of positioning in new markets falls on the seller’s shoulders, not just marketing.

The market is not yet educated enough for your marketing team to realistically preempt every buyer that enters the sales cycle.

So the positioning task must fall on you as the seller.

When we analyzed the topics discussed in the early stages of competitive deals, we found that winning sellers covered positioning-related topics 58% more than their peers who eventually lost the deal: 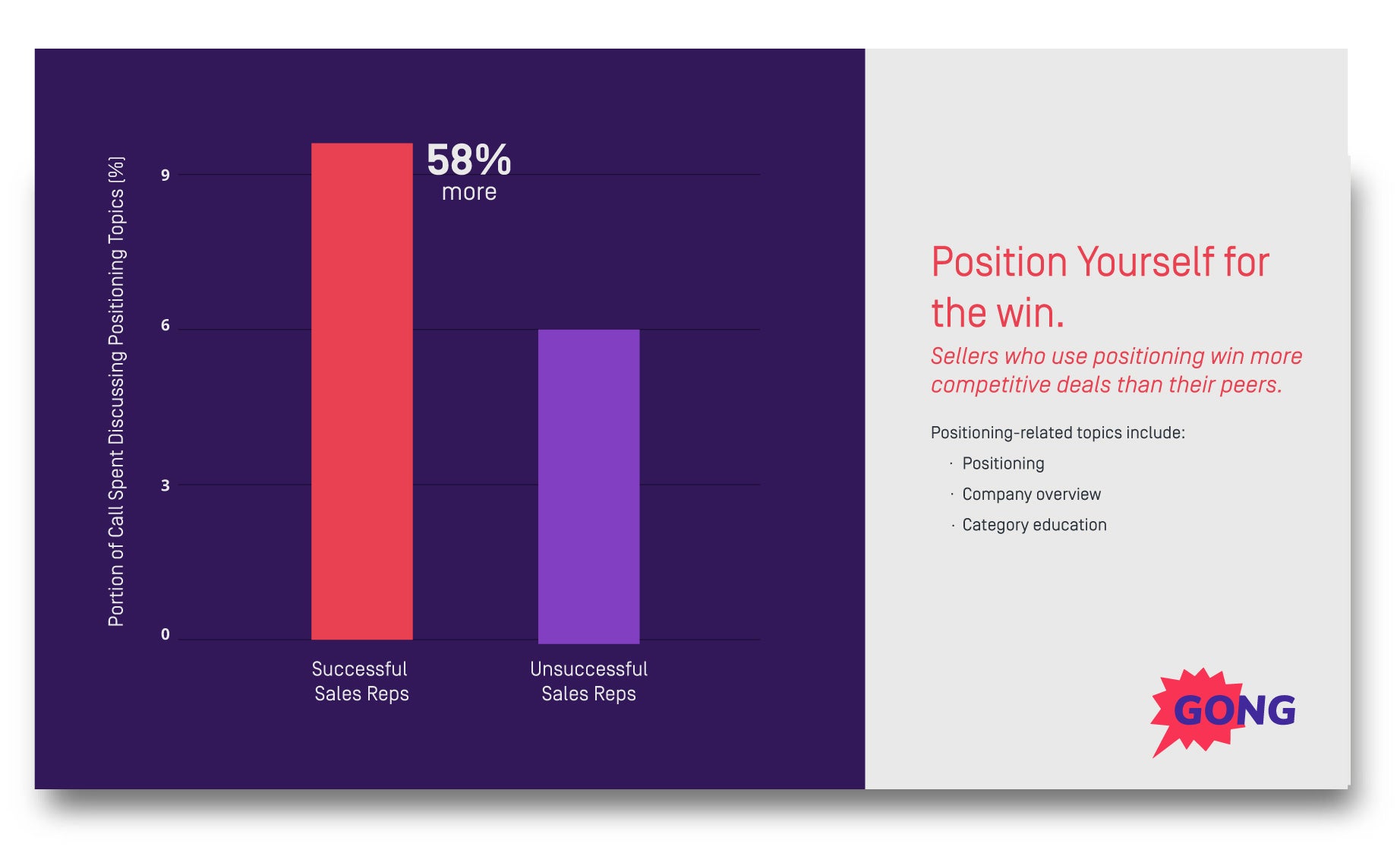 By educating buyers about the market, and cementing which part of it you occupy, you are more likely to avoid pricing wars at the end of the sales cycle: 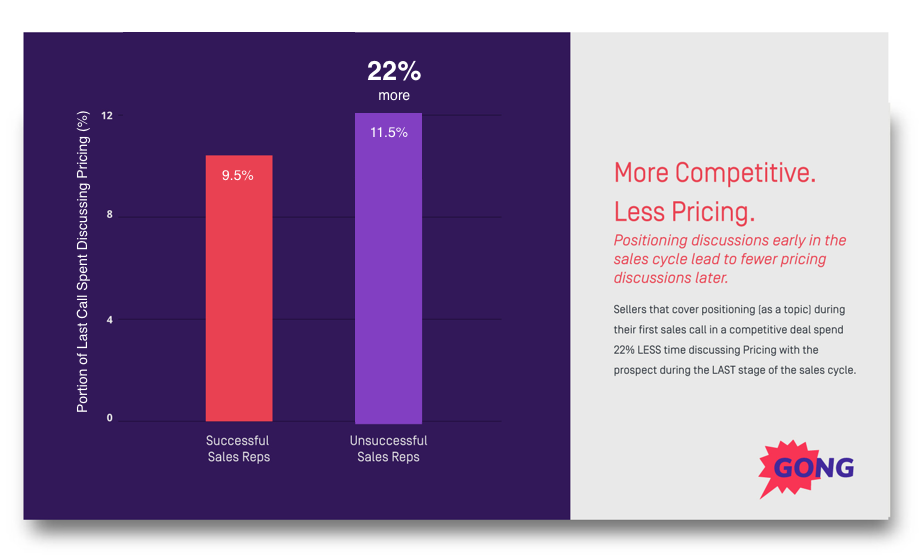 Avoiding this late-stage “race to the bottom” conversation is critical to you winning the deal.

If it’s late in the game and the competition is still in the race, the longer you discuss pricing, the less likely you are to win: 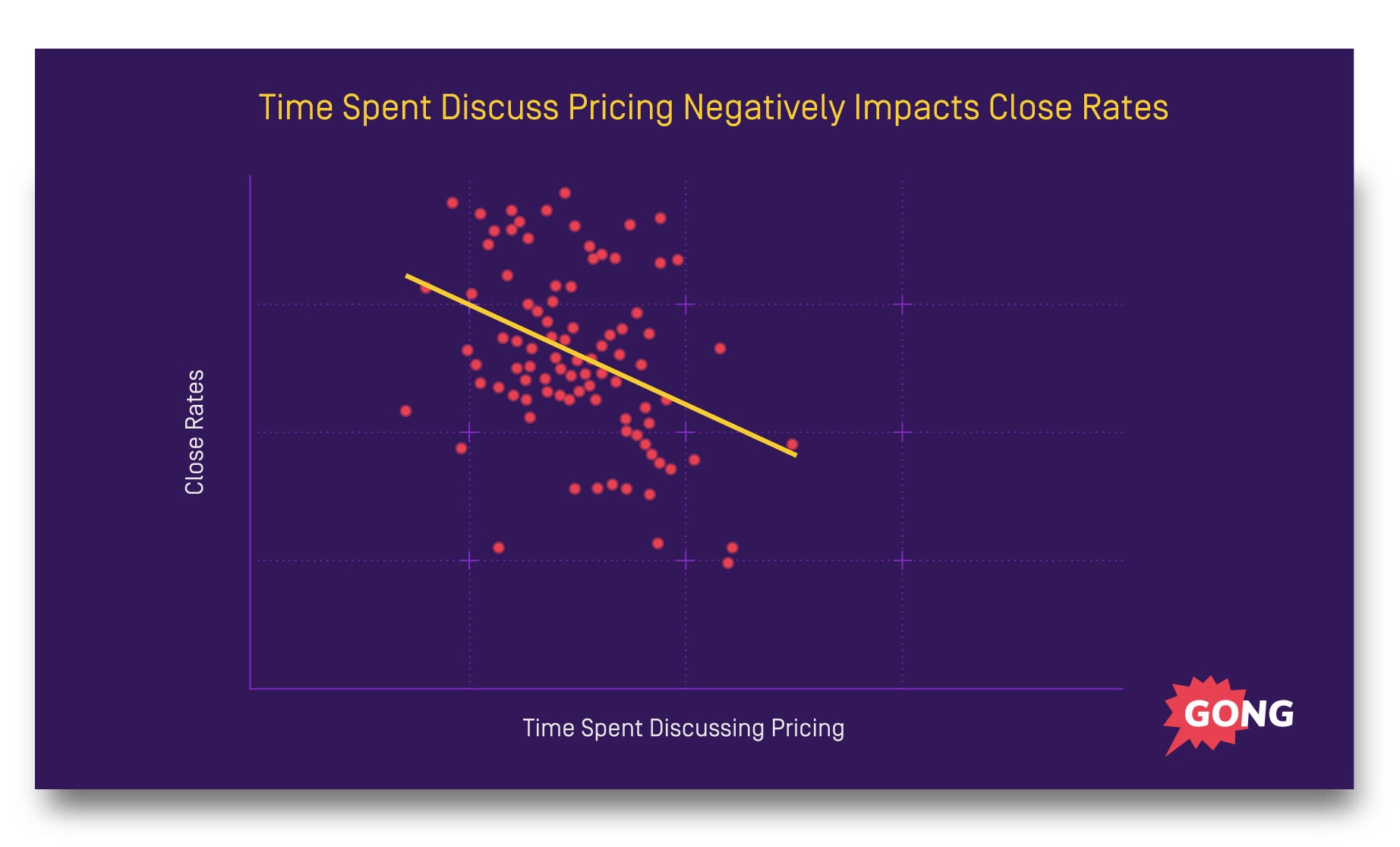 If you’re trying to win in the final hour, you would have been better off pre-empting the competition at the beginning of the sales cycle.

Winning this late in the game can, of course, be done.

But it’s beyond the scope of this article, and all I can do is wish you luck.

This article is not the last word on how to sell against the competition.

But you can take the first step to winning more competitive deals by downloading a cheat sheet version of this post:

Download it today, print it, and tape it to a wall near your sales team: 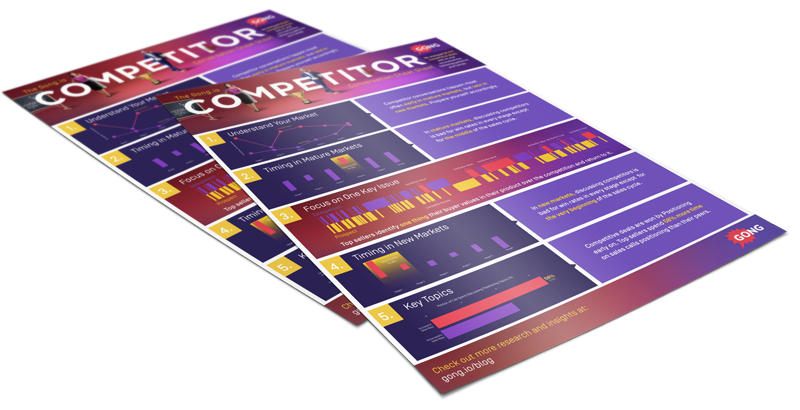 Now it’s your turn. What’s in your bag of tricks?

In the comments section below, tell us how you win against the competition.