1969: Astronaut Neil Armstrong becomes the first American to land on the moon.

All kidding aside, we are thrilled to announce the new and reimagined Gong for Deal Execution with enhanced features and functionality that provide visibility and guidance at every level.

Gong for Deal Execution brings together every interaction across your deals in a single view so sales teams can quickly understand pipeline health and stop sales from going south.

But why does this matter?

Commit, but not close

Quick quiz: What’s the difference between hitting quota and coming up short?

Answer: Knowing which deals in your pipeline are real.

And here’s a stat that will get the hair on the back of your neck to stand up straight:

53% of deals that make it to the “commit” stage never close (2019 CSO Sales Performance Report).

(Clearly, these are NOT Gong customers…)

While the average CRM can help uncover some of these data, it often requires lots (read: LOTS AND LOTS) of manual digging to find risks—combing through manual entries, sitting in on individual calls to better understand what’s going on, and so on.

Even worse: CRM data often (unfortunately) relies heavily on the opinions of sales reps (at Gong, we like to deal in reality).

Gong for Deal Execution means that each and every interaction is analyzed, transcribed, and summarized—giving you a real understanding of risk in your pipeline and guidance to close even more deals.

No more guesswork. No more opinions. No more gut feels. 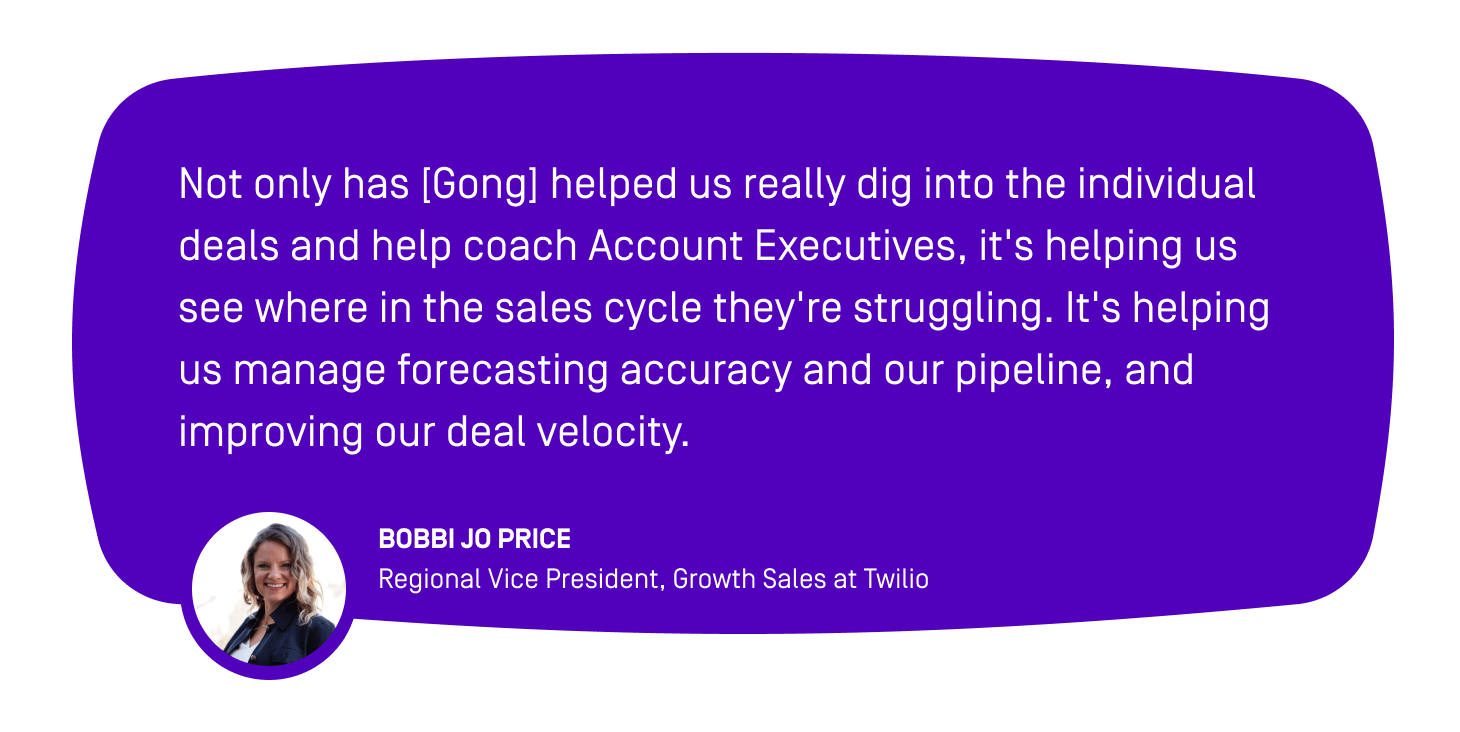 Gong is truth serum for your pipeline

With Deal Boards, sales managers can go from a bird’s-eye view of their pipeline to the nitty-gritty details to really get to the bottom of what’s happening—what’s at risk, why it’s at risk, and which deals are actually likely to close. 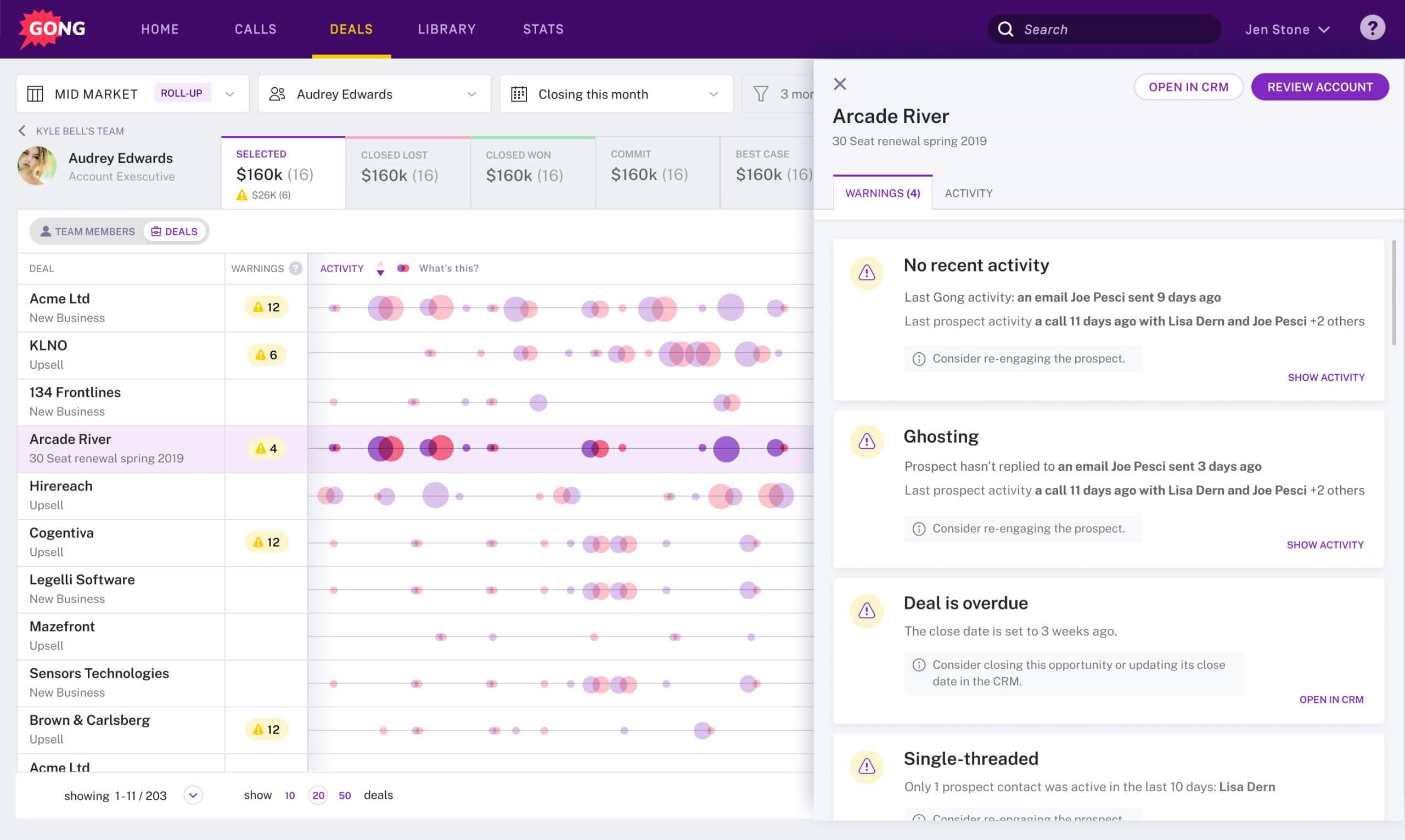 Gong flags risk with Deal Warnings, which are based on reality. It’s a combination of who’s involved in the deal and how multithreaded it is; it’s the cadence and health of the conversation; it’s the power present in the conversation (or lack thereof)—and more. 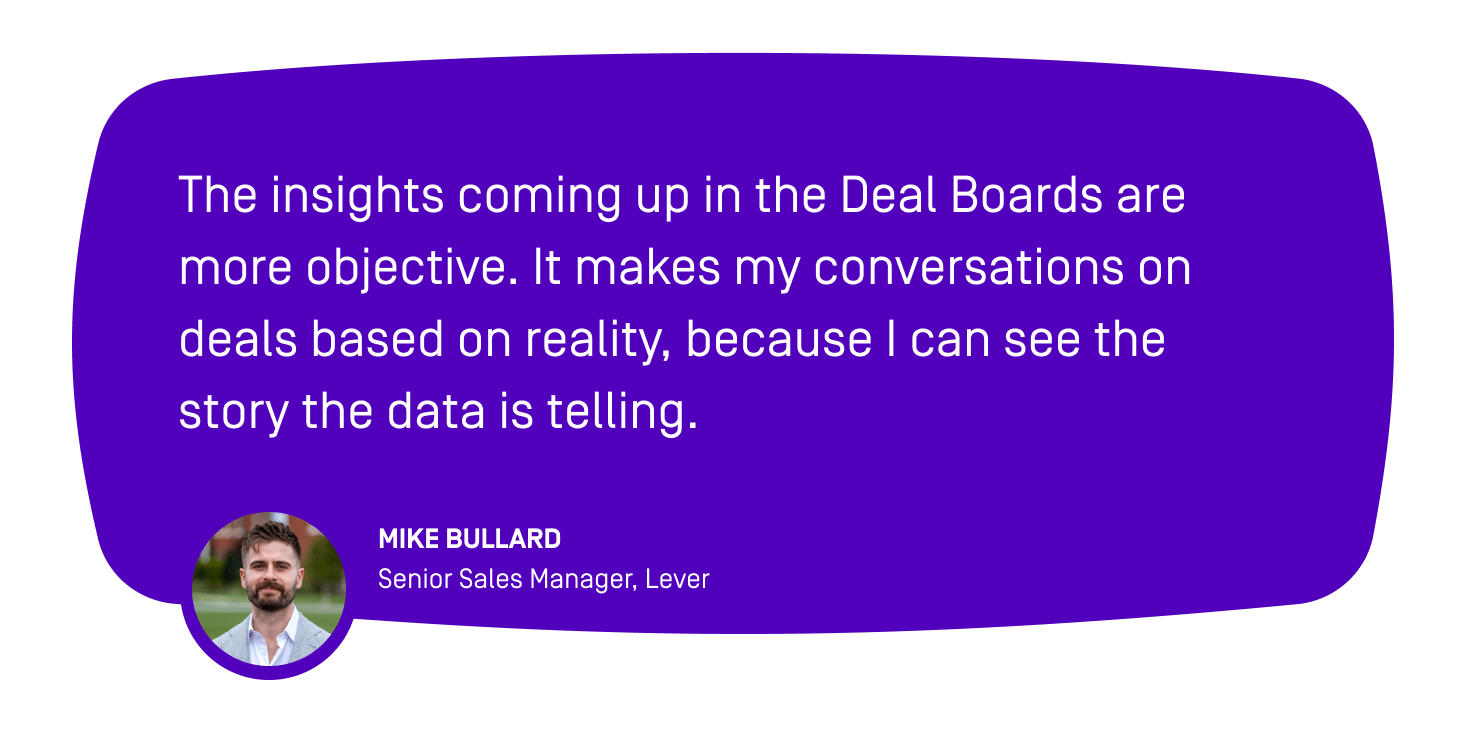 The other key to being an effective sales leader is to report an accurate number every quarter. Without a real-time, proactive understanding of risk—as well as behaviors tied to success—it becomes nearly impossible to call that number confidently.

Deal Warnings let managers see risk within the context of their pipeline stages. These stages can be customized to fit your team’s sales process and CRM. Learn more about Deal Rollups. 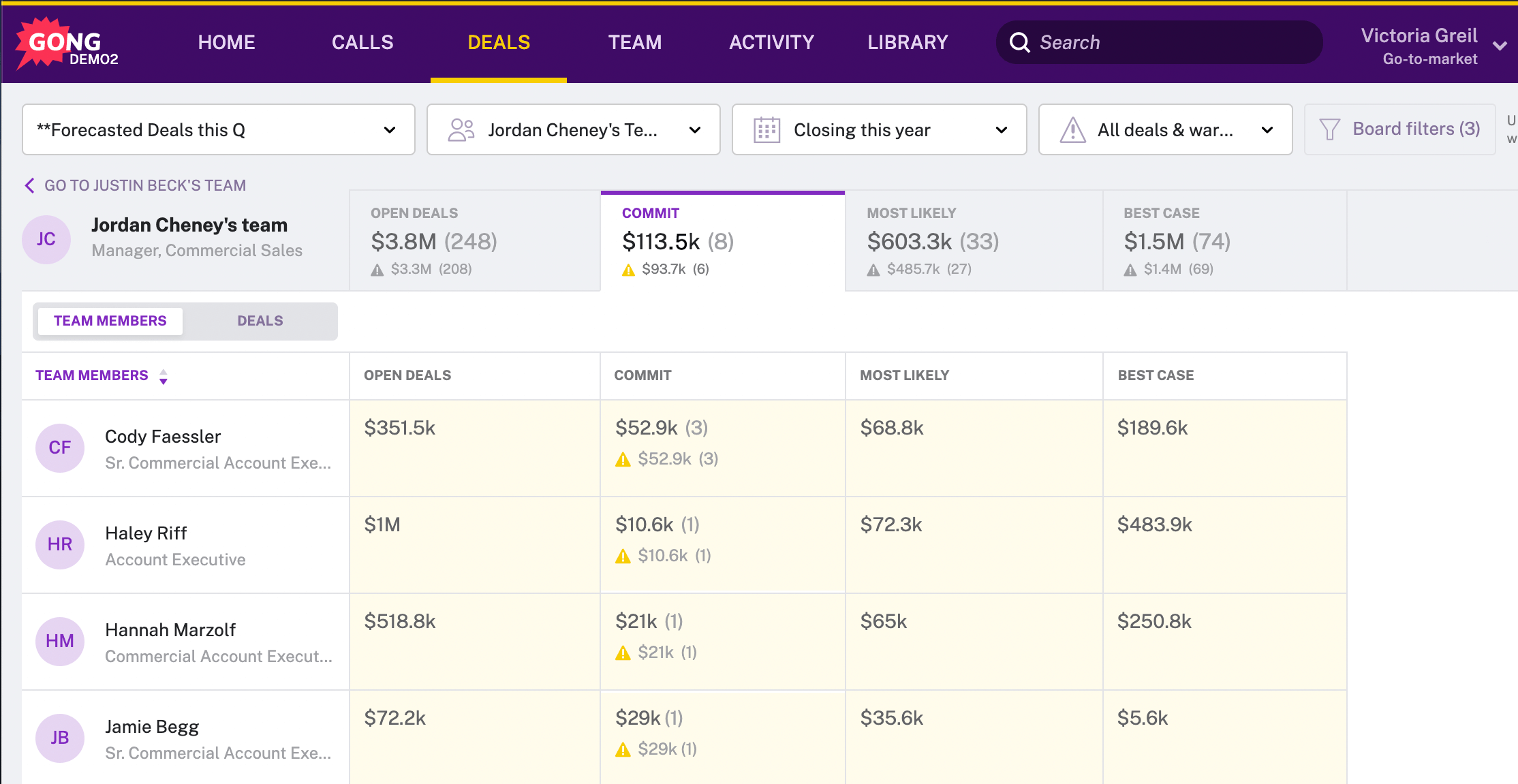 As all great sales managers know, seeing risk within the context of your pipeline is essential to a more accurate sales forecast. 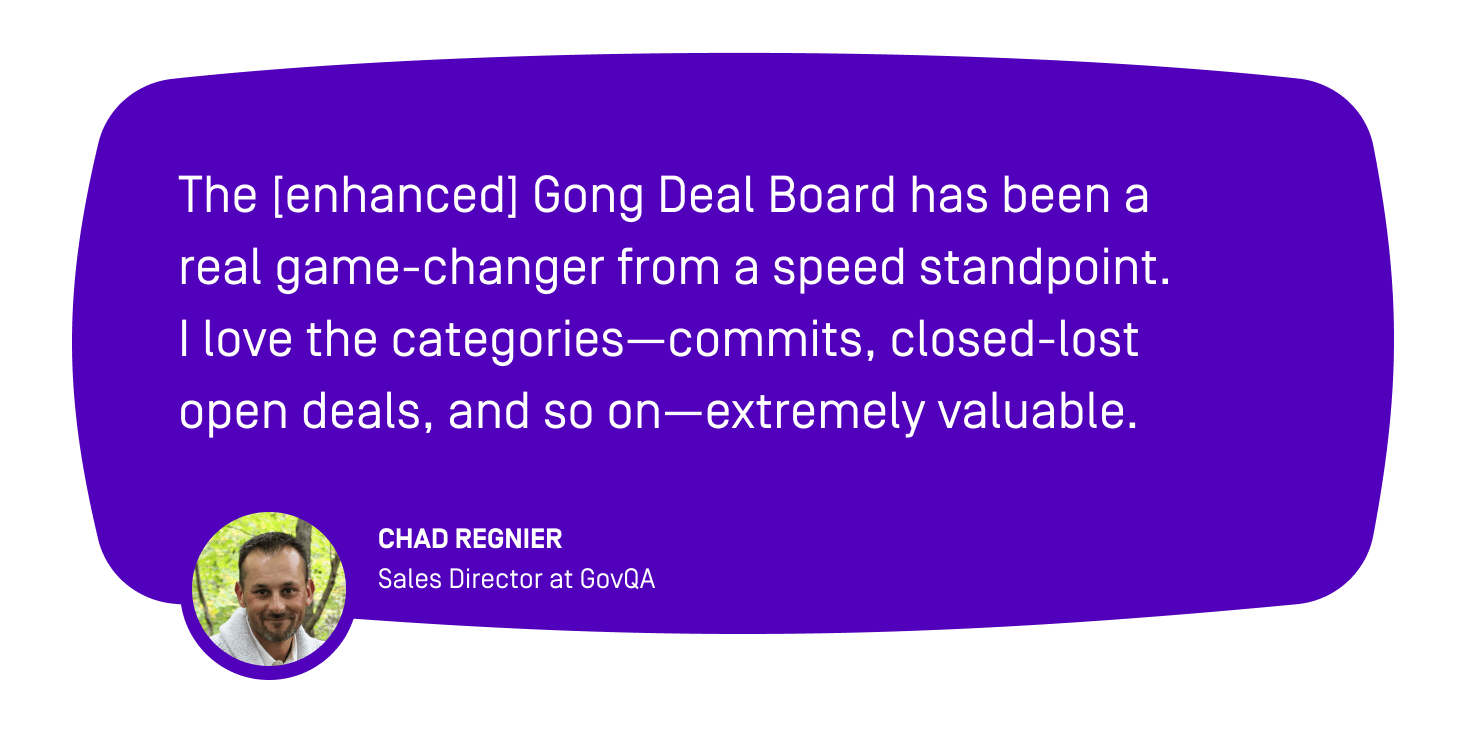 As a manager going into a one-on-one with a rep, Deal Warnings can be used to identify areas to work on together. Drill down to an individual rep—even down to the email interactions behind a specific deal—to quickly diagnose what’s going on.

Learn more about addressing risk in your pipeline in our latest Gong Beyond event.

Gong’s AI is taking customization to the next level with Deal Insights.

Deal Insights takes all the deals your team won and lost over the last 12-month period and analyzes them to show what good and bad looks like for your team. 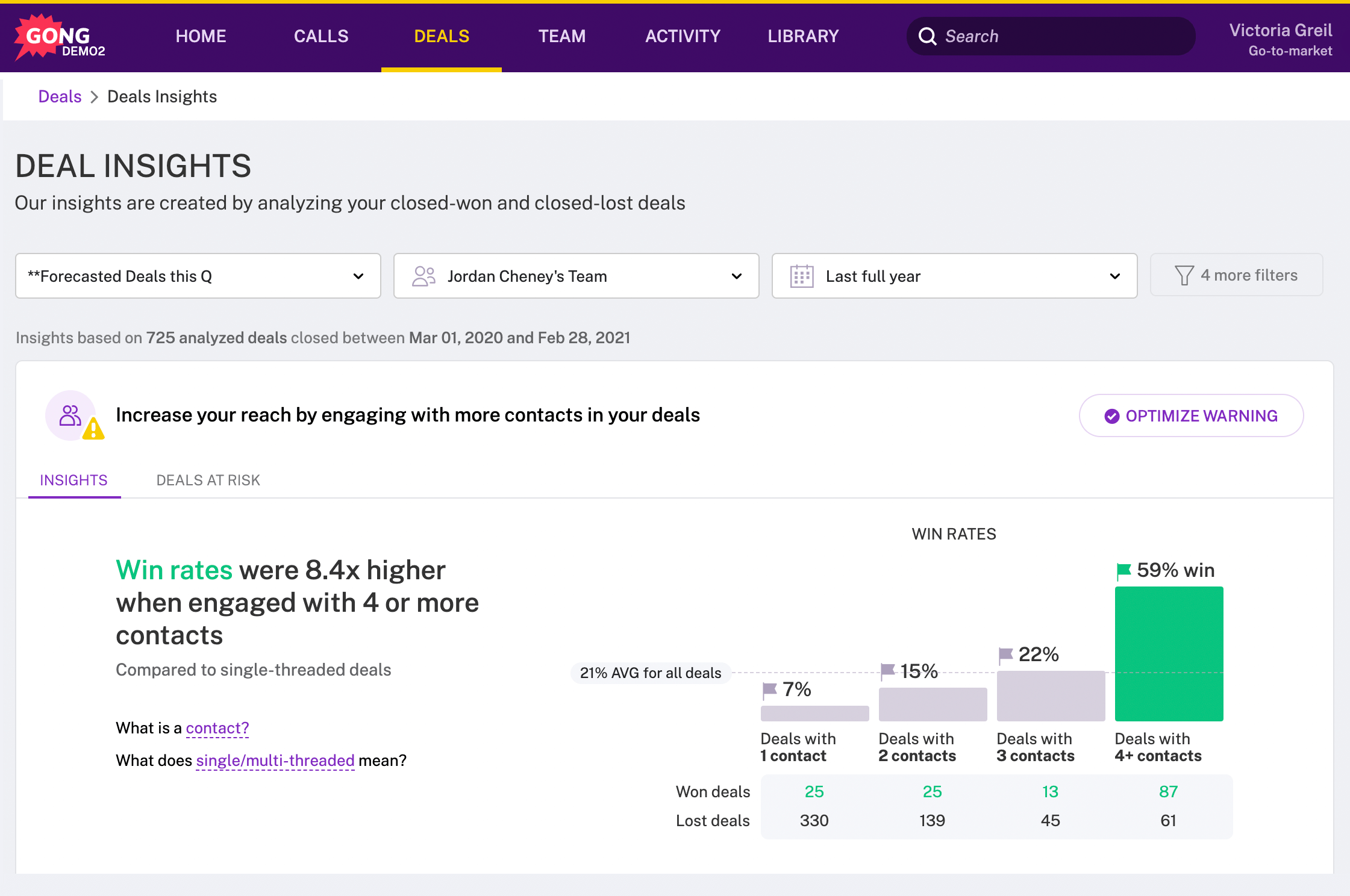 Deal Insights surfaces trends around multi-threading—which we know from the data is a huge driver and predictor of win rate. Gong’s AI knows exactly what you need to do in each deal to close (i.e., the optimal number of contacts necessary), and alerts you when you aren’t on track.

Not only can managers begin applying this as a Deal Warning in their pipeline, but it can also be used as an opportunity for team-wide coaching.

Gong has your back

Gong is here to help.

Help uncover the truth in your pipeline.

Not yet a Gong customer? Learn more about Gong for Deal Execution.