7 seconds is all you get on a cold call.

And that’s on a good day.

That’s why I put together these 6 cold calling examples.

The first two examples are like a one-two punch.

Hit your prospect with them inside of 7 seconds and you’ll grab their attention from “hello” until “speak to you next week.”

Disclaimer: These examples rely 100% on hard data on hundreds of thousands of successful cold calls and 0% on opinions, it’s what you need to actually stand a chance of hitting quota.

Example #1: This cold call opener beats every line in the book

I was surprised too (at first).

BUT it makes complete sense.

Asking “How’ve you been?” is what’s called a “pattern interrupt.”

Compared to standard examples like “Can I have a minute of your time?” a pattern interrupt temporarily scrambles your prospect’s brain.

Instead of defaulting to “not interested” they’ll hang on to your call a little longer to understand what’s going on.

And the data proves it: Cold calls using the opening line “How’ve you been” are 6.6X more successful in getting a meeting booked. 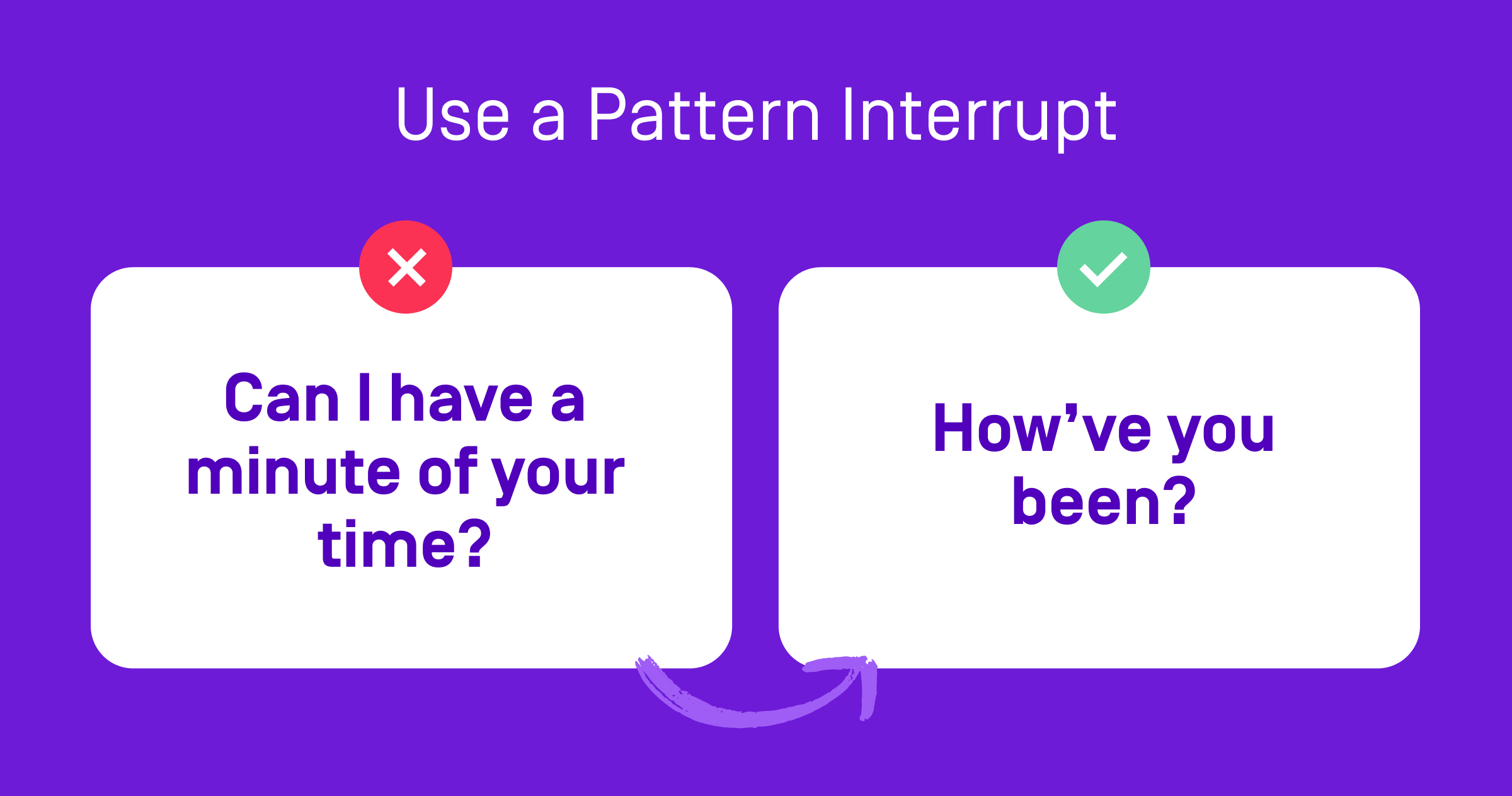 This advice gets handed out as Sales Prospecting 101.

Sales blogs (good ones too!) say it’s a great way to get prospects roped in.

The thinking is: Because asking “Is now a bad time?” makes them feel in control – prospects are more likely to comply.

In practice, the data proves that asking “Is now a bad time?” on a cold call has the lowest (yes, you read that right) correlation with meetings booked of any line: 40% BELOW the baseline.

Instead, try asking “Is now a good time?” and softening your ask with a little humor.

First, it signals to buyers that you acknowledge the interruption and, second, it helps you stand out from the slew of cold calls your prospect is already receiving on a daily basis. 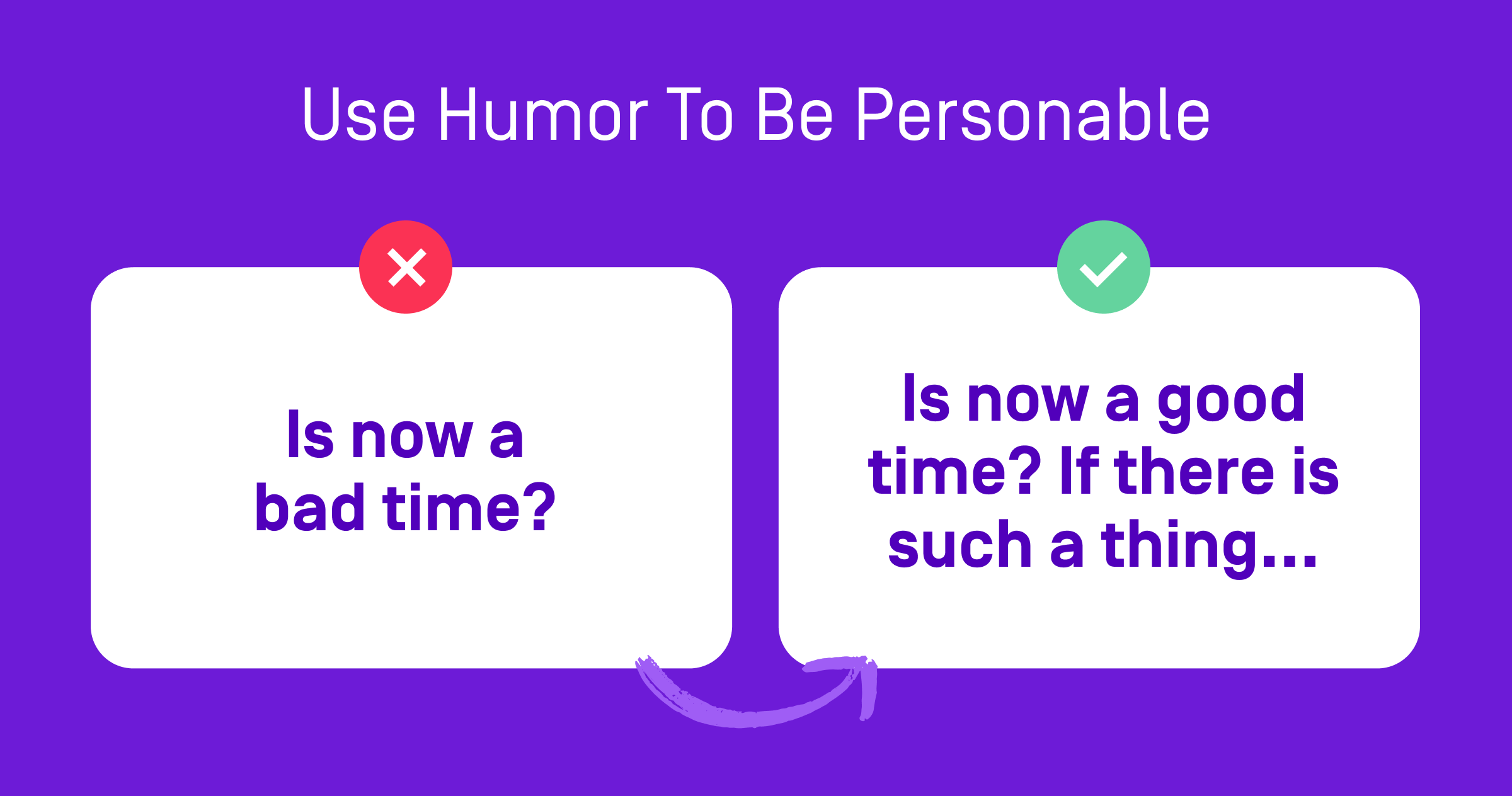 They allow prospects to give rich, juicy answers that give sellers (you) plenty of information to use later.

But cold calls are a different beast.

Prospects are constantly evaluating whether the effort-to-reward ratio is worth it for them to stay on the line.

And making a tall ask like “Can you tell me about your priorities this quarter?” isn’t going to help keep that calculation in your favor.

Instead, opt for easy-to-answer questions that can help you steer the conversation. 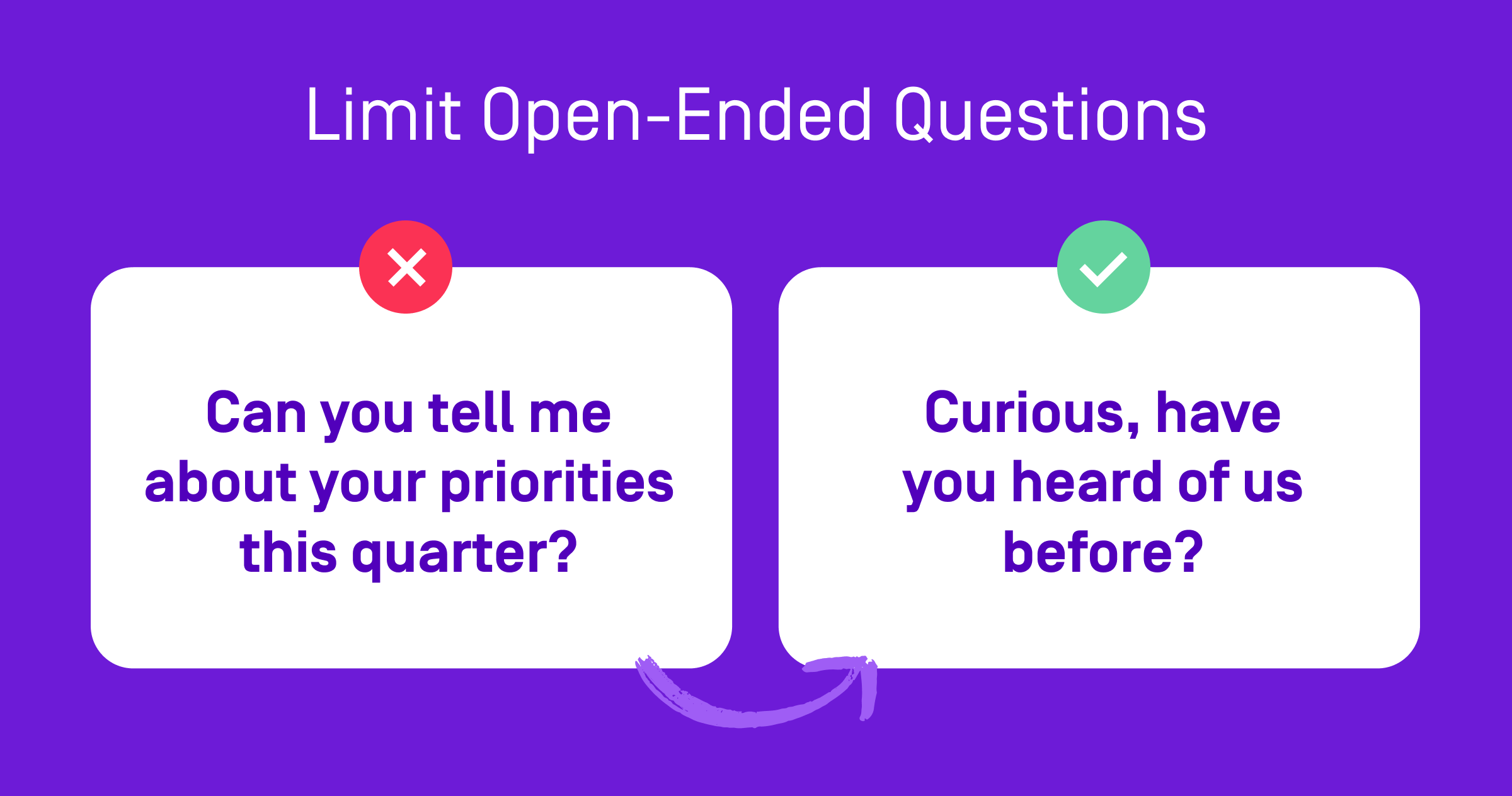 Whether they answer yes or no, your next move is to dive into your value prop. You’ll find a perfect example of this in the Wolf of Wall Street’s cold call script.

Example #4: Use this type of CTA first

Our research shows that using what is known as interest CTAs in cold emails beats out specific CTAs every time.

It’s a new approach to prospecting that consists in “selling the conversation, not the meeting.”

A meeting = time, and that’s a scarce resource.

But interest isn’t a scarce resource (in fact, it isn’t even a resource).

The reasoning is the same behind this cold calling tip.

For example, instead of asking “Would you be interested in booking a meeting to see how we can help?”

Try asking “Does it make sense for me to give you more detail about how we do that?”

You aren’t asking for time, and you’re showing what’s in it for them (i.e. selling the conversation). 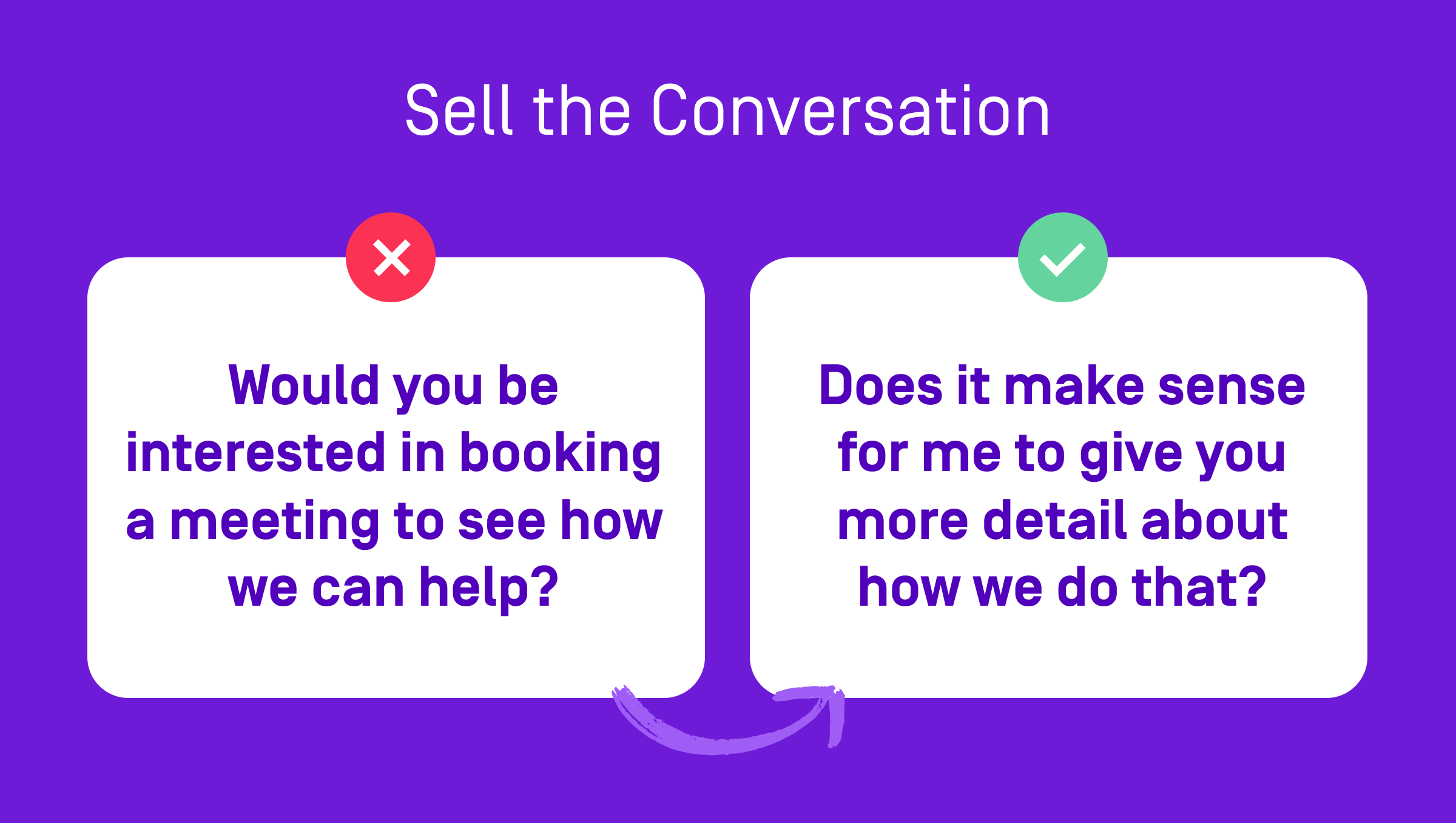 They even agreed to meet with you.

Instead of staying at a verbal agreement (for example, “Ok, sounds good, send me an invite”) now is the time to get the meeting on the books.

Here’s what I mean:

Nudge them to accept the invitation BEFORE THE CALL ENDS.

A gentle prompt like “Do you have your calendar in front of you?” followed by “I just sent the invite, do you see it yet?” is the last push you need to close the call. 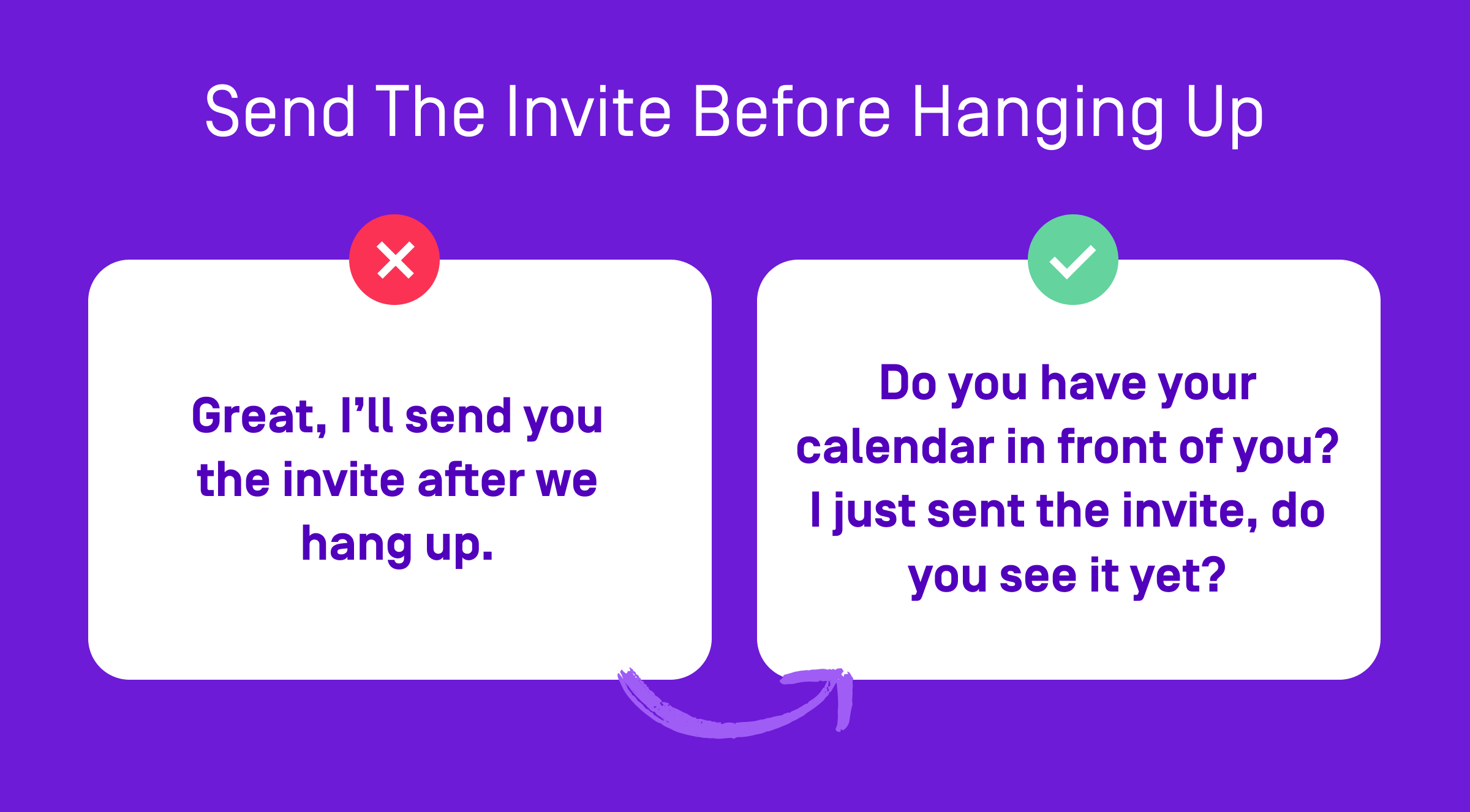 Maybe your cold call didn’t work out (this time).

Here’s the framework to turn their objection (I don’t have time right now, I’m not the right person, I’m not interested in what you’re selling, whatever) into ammo as you continue prospecting into their account.

Here’s how to do it:

First, validate the objection. This is the part where you fall (gracefully) on your sword.

Second, label the objection. This is where 99% of cold calls go sideways: Instead of moving on, make your prospect feel heard. It’ll help you get an answer when you move in for your follow-up ask.

Third, follow up with your secondary ask. So they aren’t the right person. Who is? Now isn’t a great time. When should I call back? I’m not interested. What are your key priorities?

Here’s an example of how you can turn cold call pushback into pipeline: 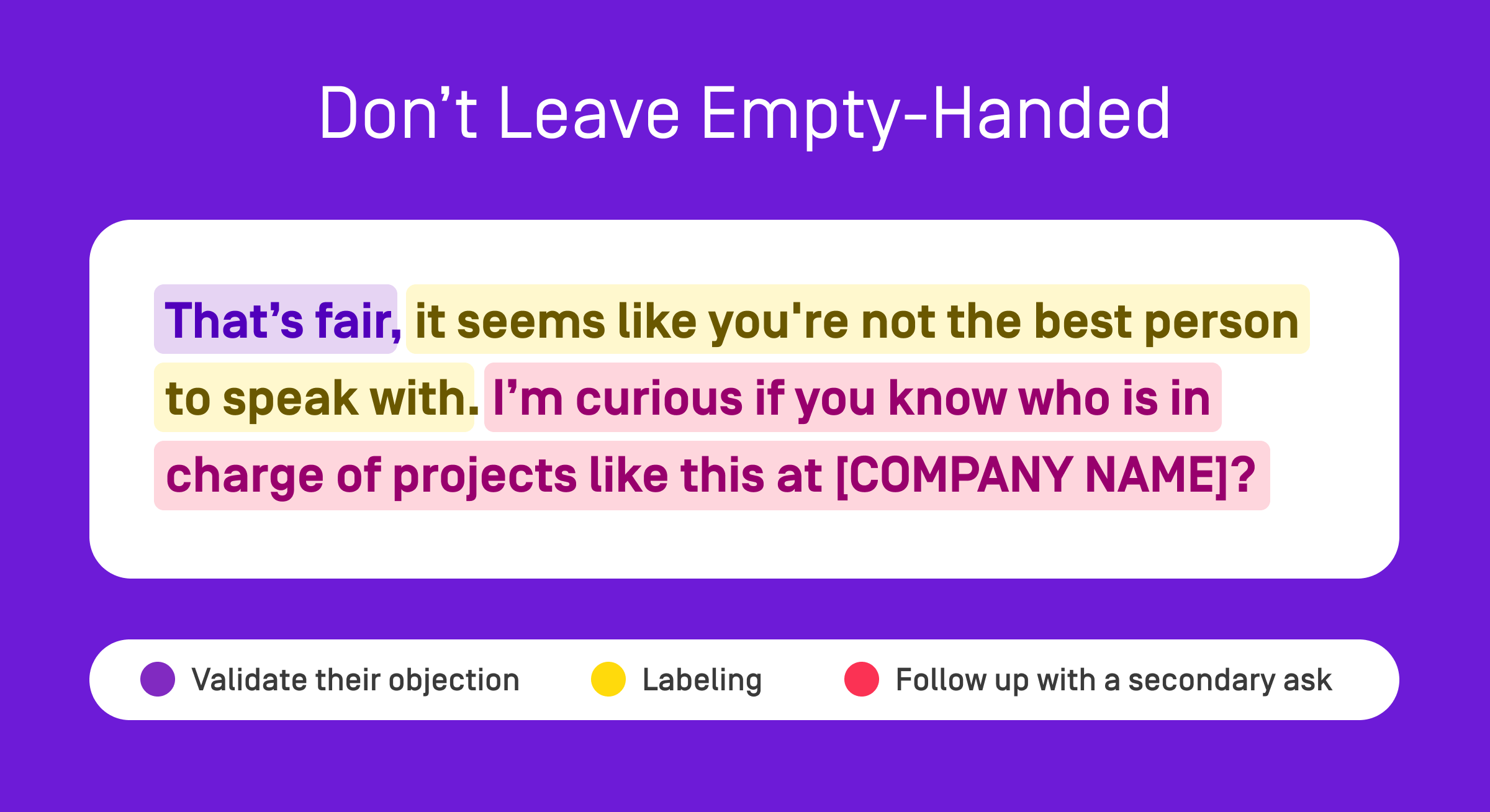 Bonus: This is for you

So what do successful cold call scripts look like?

It includes a cold call script, a voicemail script, and an email follow-up template.

All backed by data.

All proven to book meetings.

All guaranteed to put your cold calling software in hyperdrive.

After all, pipeline doesn’t build itself. Right?