The VP of Sales’ average tenure has steadily declined the last seven years.

Once standing at a healthy 26 months, it’s now just 19 months. 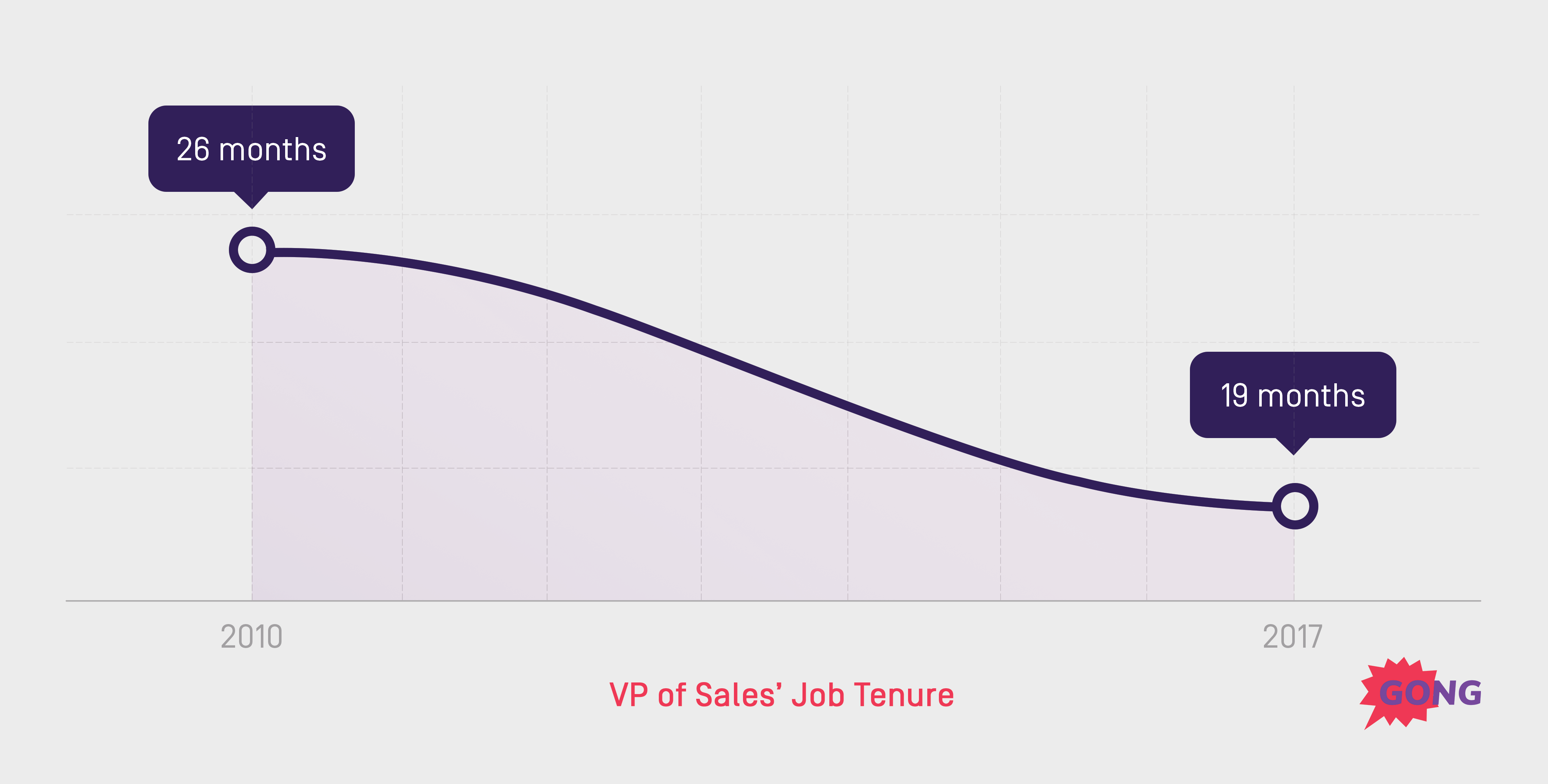 7 months of tenure have evaporated.

19 months on the job isn’t much time to make the impact you’re committed to making.

Here’s How We Got Here

In parallel to this tenure decline, we have another downward trend.

The percentage of reps attaining quota on the average B2B sales team has steadily declined over roughly the same time frame. 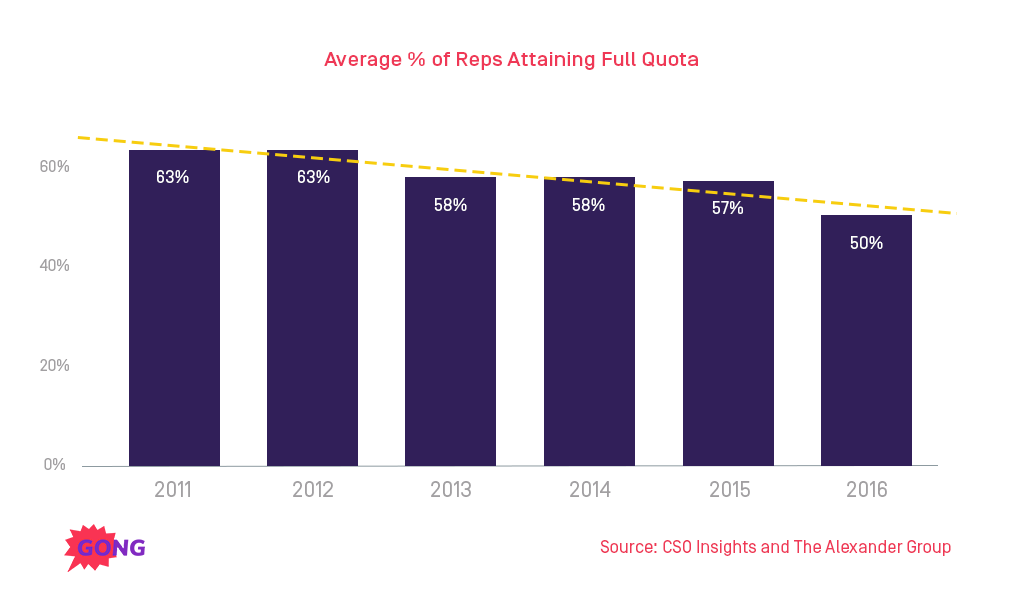 In other words, if this trend continues in 2018, half of your team will make the grade, and the other half won’t.

Anyone who’s spent enough time in sales leadership will recognize that these two trends are tightly intertwined.

The declining percentage of reps making quota can otherwise be described as the “sales performance gap.”

It’s the delta between your top reps, and your “middle-of-the-pack” (those that are below quota, but high enough to show potential).

This “gap” creates the bell curve that we’re all familiar with: 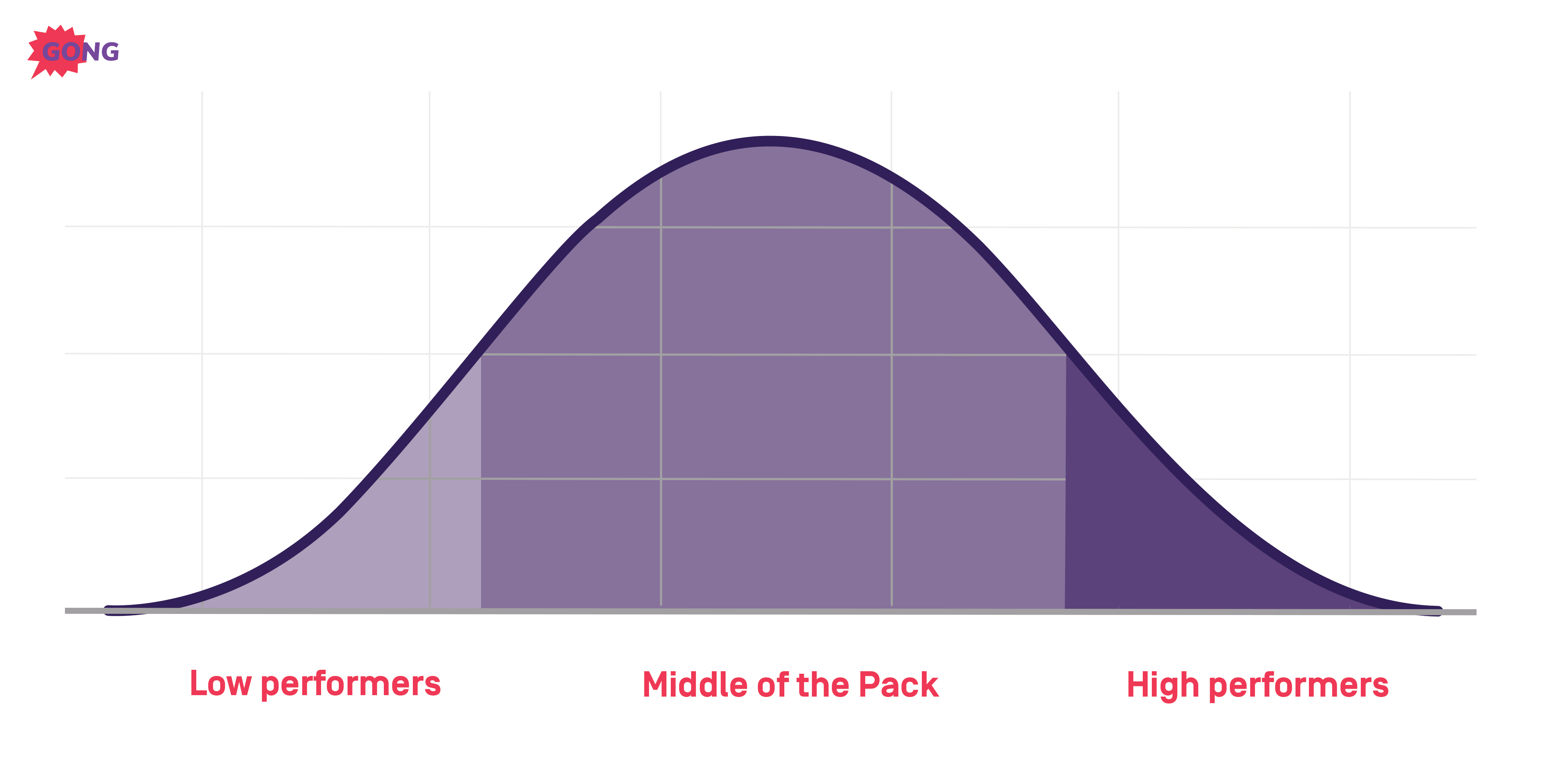 Despite the fact that we are highly familiar with this bell curve, most of us are asleep to the havoc it’s wreaking on our sales teams (and our careers).

Here are some examples…

Most sales leaders don’t have the luxury of winning deals at any cost.

The counterbalancing metric they are held accountable to is an acceptable cost of revenue.

Having a wide delta between your star reps and everyone else balloons your cost of revenue.

Despite what some of them may claim, your below-quota salespeople aren’t missing their numbers for lack of leads, or unfair territories.

They are missing their numbers because of sub-par win rates.

It’s an effectiveness problem in most cases, not a quantity problem.

If the majority of your sales force has a slightly less-than-needed win rate, cost of revenue compounds, just like compound interest.

Qualified opportunities are poured into a sales force that isn’t equipped to have sales conversations that materialize them into revenue.

Those qualified opportunities are expensive to generate.

And when your reps are operating at a sub-standard win-rate, they have to wade through more lost deals to finally get a win.

Both of which further dial-up our cost of revenue metric.

The most common reason reps voluntarily turnover is they aren’t quite making full quota, which means fewer dollars in their pocket.

Some of these reps may be a poor fit for the role.

But I’m not talking about them.

What I worry about is the good (but not yet great) reps consistently scratching the surface of quota, but falling just short.

They eventually leave out of frustration, not lack of fit.

These reps who are close to quota, but not quite there, need nothing more than some strong coaching to get the rest of the way.

But instead, we’re left with a $97k average turnover cost.

And odds are, we’ll replace them with someone who will be in the exact situation 9-12 months down the road.

“Whale Accounts” Washed Up On Shore

I couldn’t resist the metaphor.

There are likely many “whale accounts” your team could have won if the sales conversations between your rep and the buyer were more effective.

Sure, there are many other variables at play: the buyer’s environment, priorities, etc.

But what knocks a warm buyer to the right side of the fence is a sales conversation handled in a skillful manner.

How many on-the-fence whale accounts have been knocked to the wrong side?

These are just three examples that make the divide between your A-Players and B-Players such a havoc-wreaking problem.

On the surface, the decline of reps making quota looks like nothing more than a mildly troubling industry trend.

Underneath the surface, however, is a much more serious storm brewing.

Closing the Delta Between Your A-Players and B-Players

All of this considered, closing the delta between your top reps and average reps should violently make its way to Priority #1.

It should become the dominant topic of discussion in sales management meetings.

As bleak as this post has seemed thus far (I’ve always had a flair for the dramatic…), there’s an incredibly positive flip side to all of this.

Moving your middle-of-the-pack up just a notch in terms of effectiveness is the single highest-leverage task you can take on.

Because by definition, middle-of-the-pack reps have the magic combination of two key ingredients:

They are likely in a role that doesn’t suit them.

They have potential, but it lies outside of the sales profession.

They are already operating in the highest performance rungs.

They are like professional golfers: the best they can expect is to improve their 18-hole game by 1-2 strokes at best.

Your middle-of-the-pack is where the leverage is.

Focusing your coaching efforts on the middle 60% of your sales force is like putting a lever under a heavy boulder, and moving it with ease.

To close the delta between your stars and your middle-of-the-pack, you first must know what separates them so you can target coaching & training accordingly.

The first place to look is how they conduct their sales conversations differently from each other.

Sure, there are many variables to what makes superstars great.

But sales conversations are the most decisive difference between a superstar rep and an average one.

Here’s some data to illustrate that…

We analyzed 1M sales call recordings with machine learning and NLP and found that star salespeople discuss pricing at entirely different points during their demo calls than their peers do: 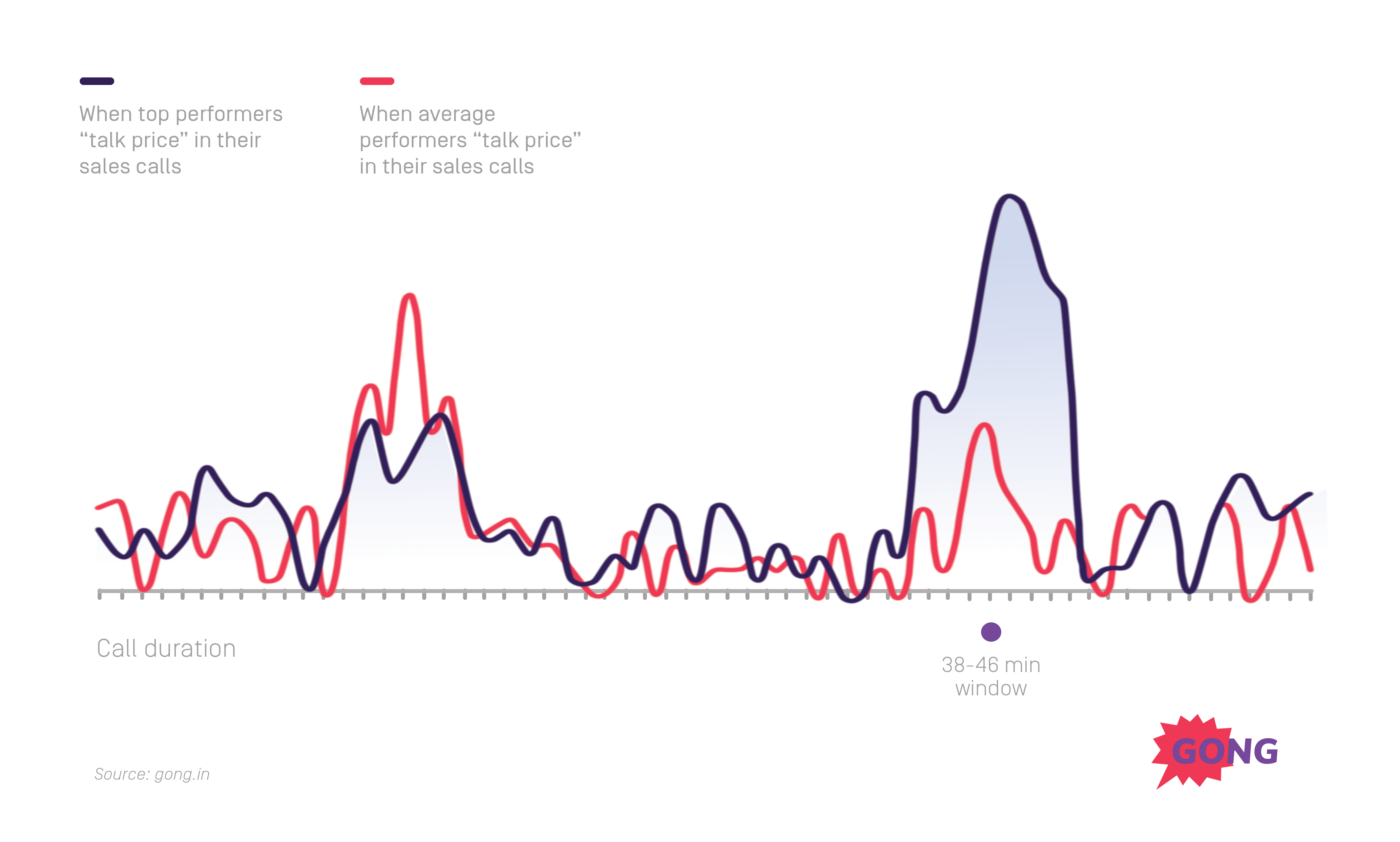 That is a decisive difference, not a small incremental one. 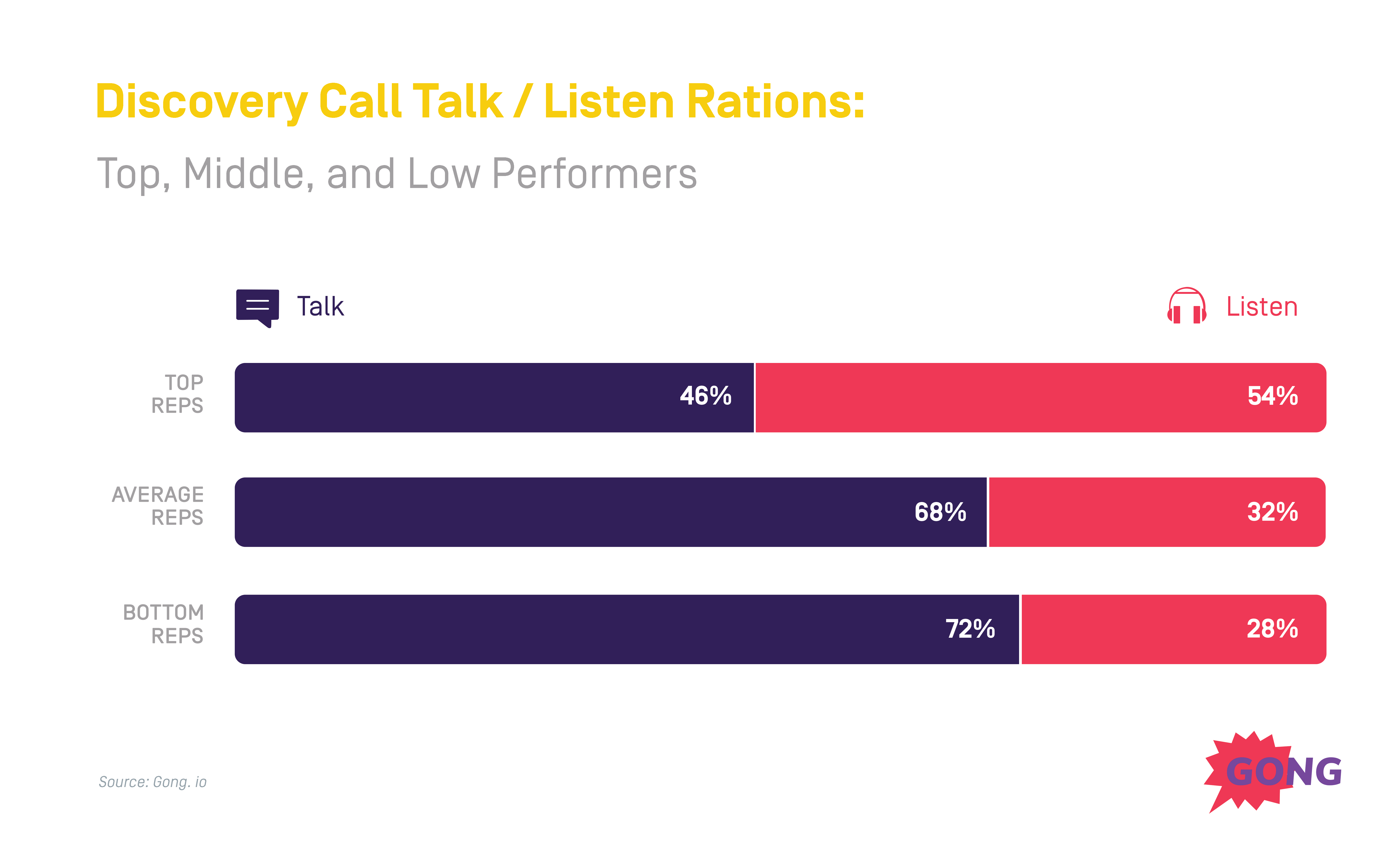 You get the idea.

I’ll refrain from posting every supporting data point we have since we’ve repeatedly posted them elsewhere.

(To see more data points like this, go here).

Here’s the point of sharing this data:

It indicates that the most decisive difference between above-quota reps, and below-quota reps, comes down to their sales conversations.

By contrast, there have been a few studies that have come up short in finding differences between A-Players and B-Players when analyzing non-conversation behaviors (such as activity volume, hours worked, etc.).

#1: Focus most of your coaching & training on your middle-of-the-pack reps. That’s where you have leverage as a sales leader. 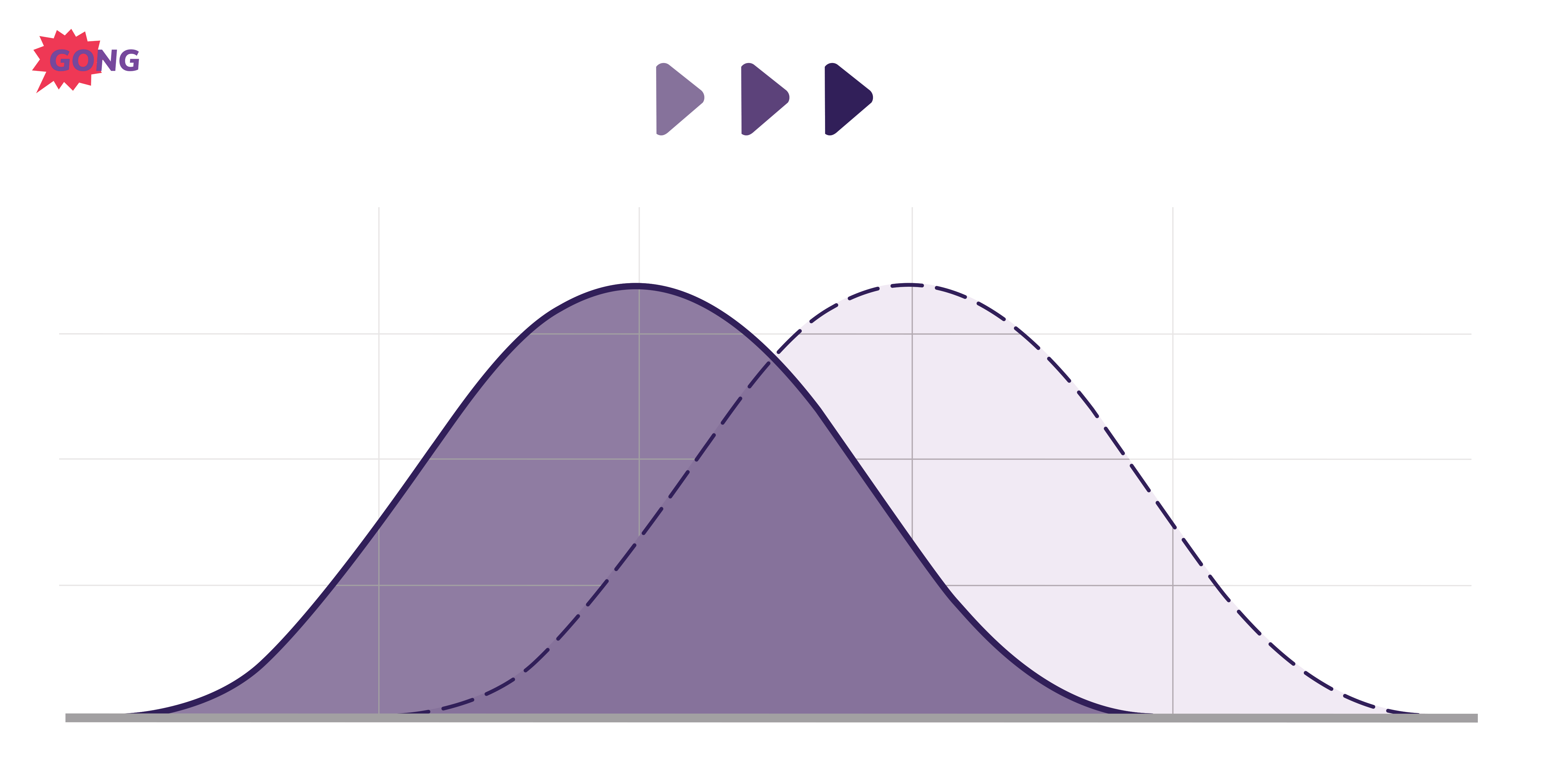 #2: Focus the above coaching & training specific to sales conversations:

These are the levers we can pull to reverse the trends we talked about at the beginning.

When you break down a big problem into small, manageable tasks, you can start to move mountains.

These two tasks are your starting point.

P.S. If you want to get a head start on this, you have to know the specific behaviors successful reps do during conversations.

These behaviors serve as the “North Star” everyone else should strive to replicate.

We went ahead and did some of that work for you.

We analyzed 1M B2B sales call recordings with AI to see what separates star reps’ sales conversations from the rest.

Check it out in our new eBook: 9 Elements of Highly Effective Sales Conversations. 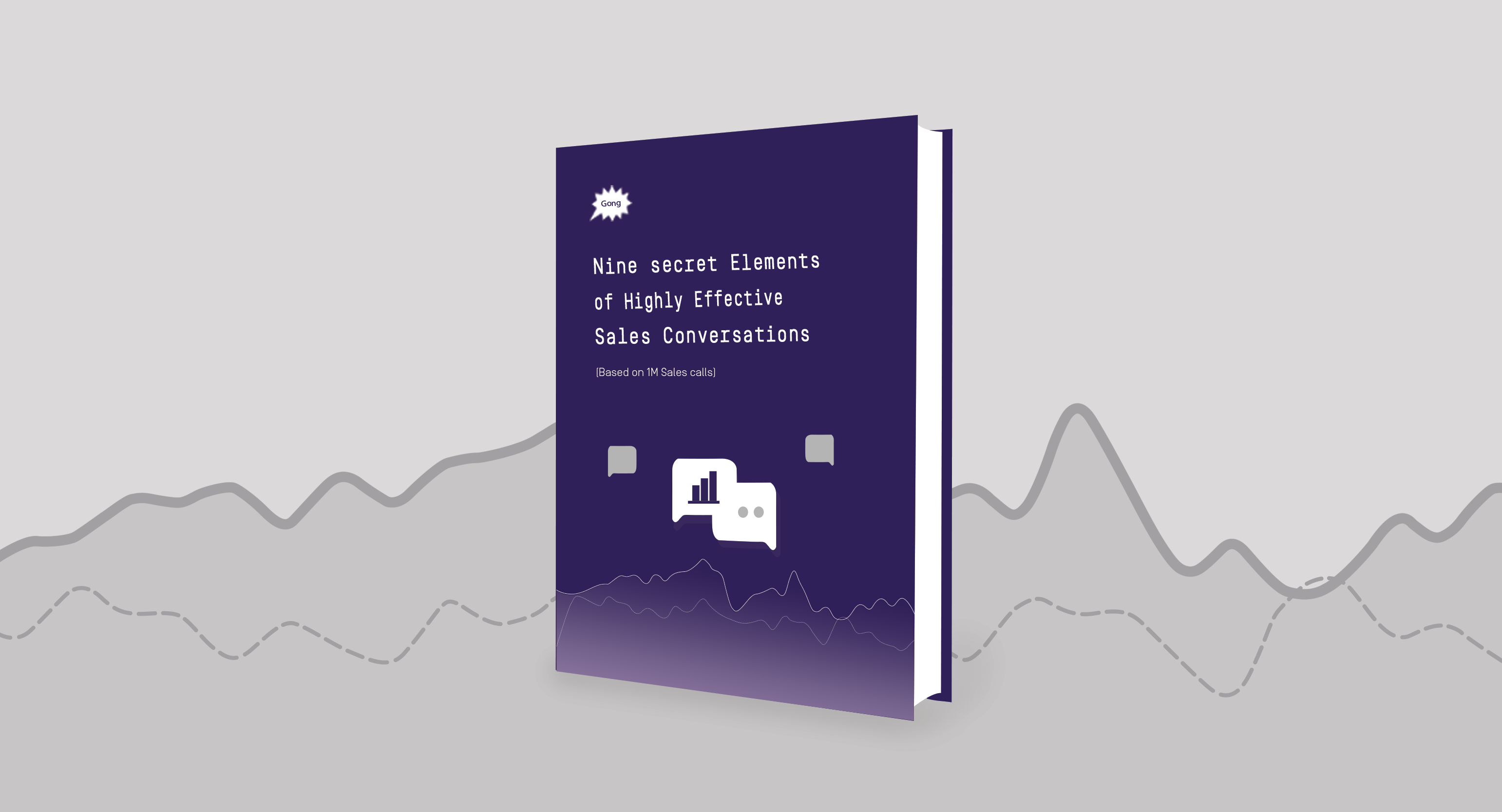 And don’t forget to send a copy to your team.