Why is research on decision-making psychology critical to your sales messaging?

How do you make the customer feel like the hero of the story?

What’s the difference between prospect and customer messaging?

On a recent episode of the Reveal podcast, we connected with Tim Riesterer for answers to these and other questions that are top of mind for revenue leaders.

Tim has more than 20 years of experience in marketing and sales, is the author of multiple books, and is Chief Strategy Officer at Corporate Visions.

The Customer is the Hero

We want as companies to make our customers live in our story. But they live in their own story. And what we really need to do as companies is go join them in their story, and help their story be better.

And so, bringing that back from the field as a recognition that marketing content, messaging, and sales conversations were too company- and product-centric. As a journalist out there talking to customers, a light bulb went off. I said, “There’s gotta be a better way.”

I’m not going to even blame salespeople. I’m going to blame companies and product management because they make the product the hero of the story. It should be customer-centric and really make the customer the hero. This has to change back inside the organization. And they have to do more than say they’re customer-centric. They literally have to live in, and join, the customer in their story.

When all products and services sound alike, look alike, smell alike, read alike, at some point somebody’s got to move their lips and tell an amazing story and articulate value in a way that somebody believes it. 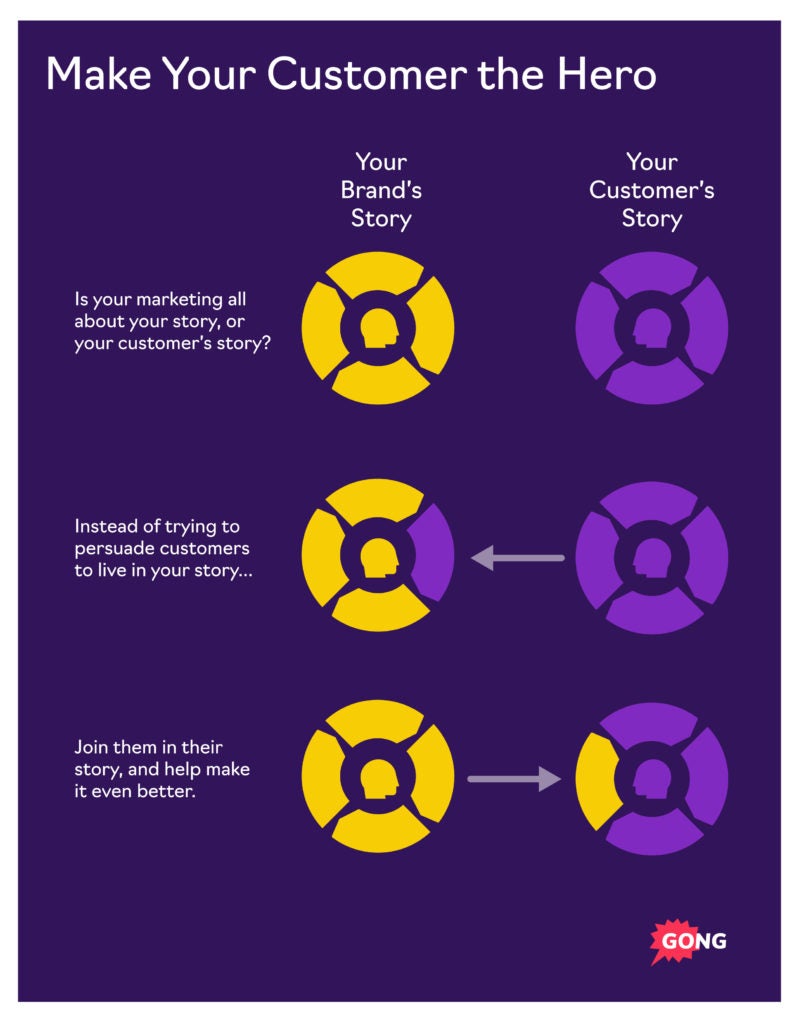 When you’re initially talking to a customer, even though they’re talking to you, that does not mean that they want to do something different. In fact, that’s what they’re actually trying to figure out. You think that because they accepted a meeting with you that this is a live deal. And the reality is, they’re literally trying to figure out if they’re missing anything.

And so if you start answering questions about why you and not somebody else, psychologically they’re like, “What? Not so fast!” But they might not tell you that. They’ll answer your questions, and you’ll continue to think you have the deal.

And then that’s why we see pipelines end up in 60%, 70% no decision, status quo. Because the salesperson thought they had an active deal cycle, and it turned out they didn’t. 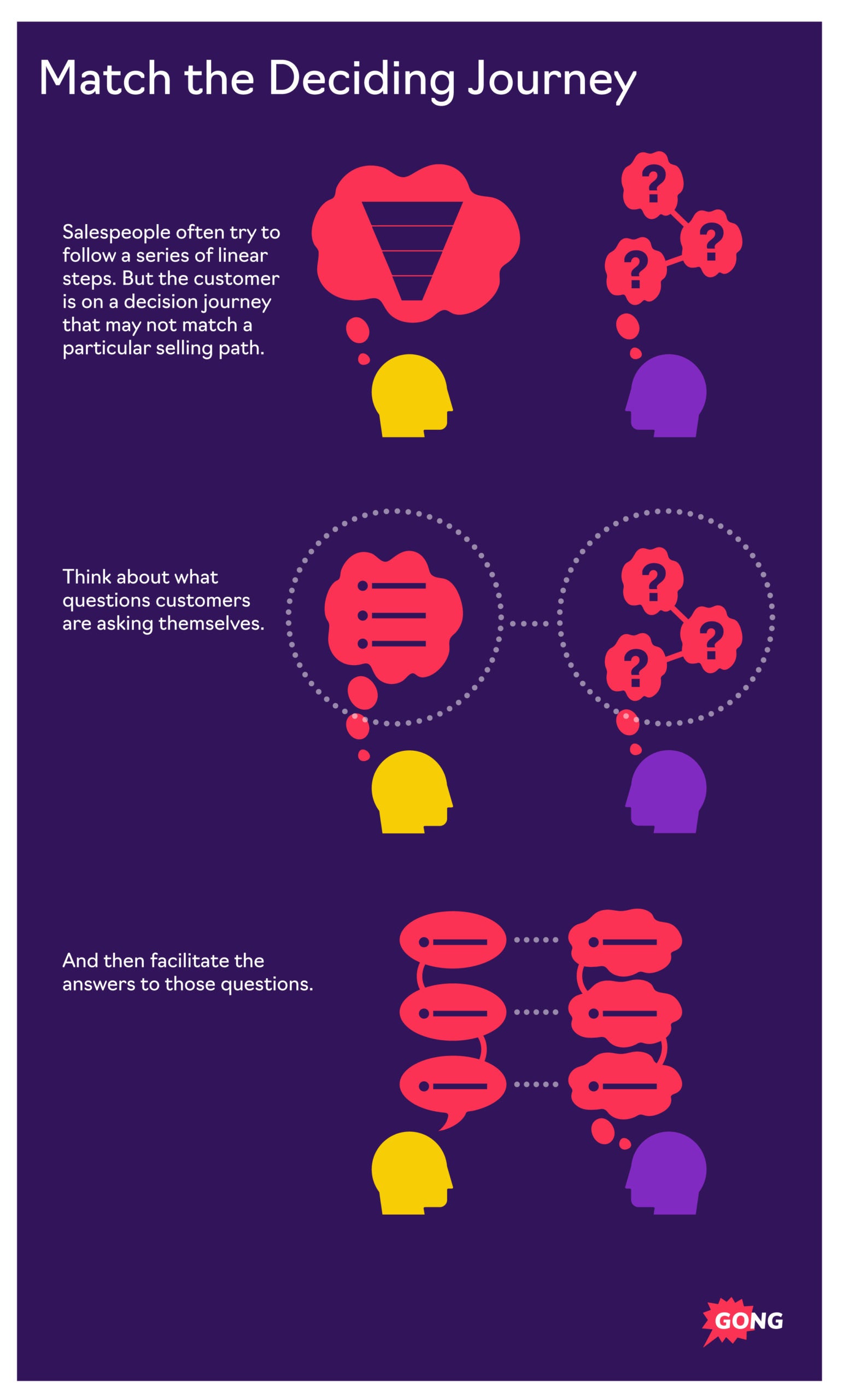 Data Breakout—Communicating Your Vision and Value

Most prospects either don’t recognize, or can’t articulate, the root challenges they struggle with on a daily basis. So, even if you sell a truly remarkable product, your buyers probably won’t recognize the real value you offer to their organization. That’s why you need to create your value with a powerful and persuasive message.

In fact, Forrester research found that 74% of executive buyers will give their business to a company that can create and deliver on a compelling vision, compared to vendors that are more straightforward and respond to specific requests.

This isn’t just about touting your product’s features, hoping that your buyer chooses you over your competition. That approach only puts you at value parity with similar solutions, and it forces a competitive bake-off.

While customer acquisition is all about challenging the status quo to highlight the benefits of switching to your solution, customer retention and expansion requires you to reinforce your position as their status quo.

In fact, research shows that using a provocative, challenging message when you’re trying to renew or expand business with your customers will increase the likelihood that they’ll shop around by at least 10% to 16%.

People were asking us, “Hey, is acquisition messaging, the way you approach a prospect, the same when you’re trying to expand an existing customer? Should we use the same process, the same motion, the same approach, the same words?”

Well, when we went out and studied it, we discovered that in fact, it’s different. The psychology of an existing customer is 180 degrees different than a prospect. When you have a prospect, your job is to displace the incumbent, to disrupt their status quo bias. So we learn how to do that through provocation and insights and all these things.

Nobody’s purposefully doing things wrong. They have good intentions because it feels right. And then when we’re able to show that that’s the exact wrong way to do it, it’s like, “You have the right intentions, but the wrong instincts.” 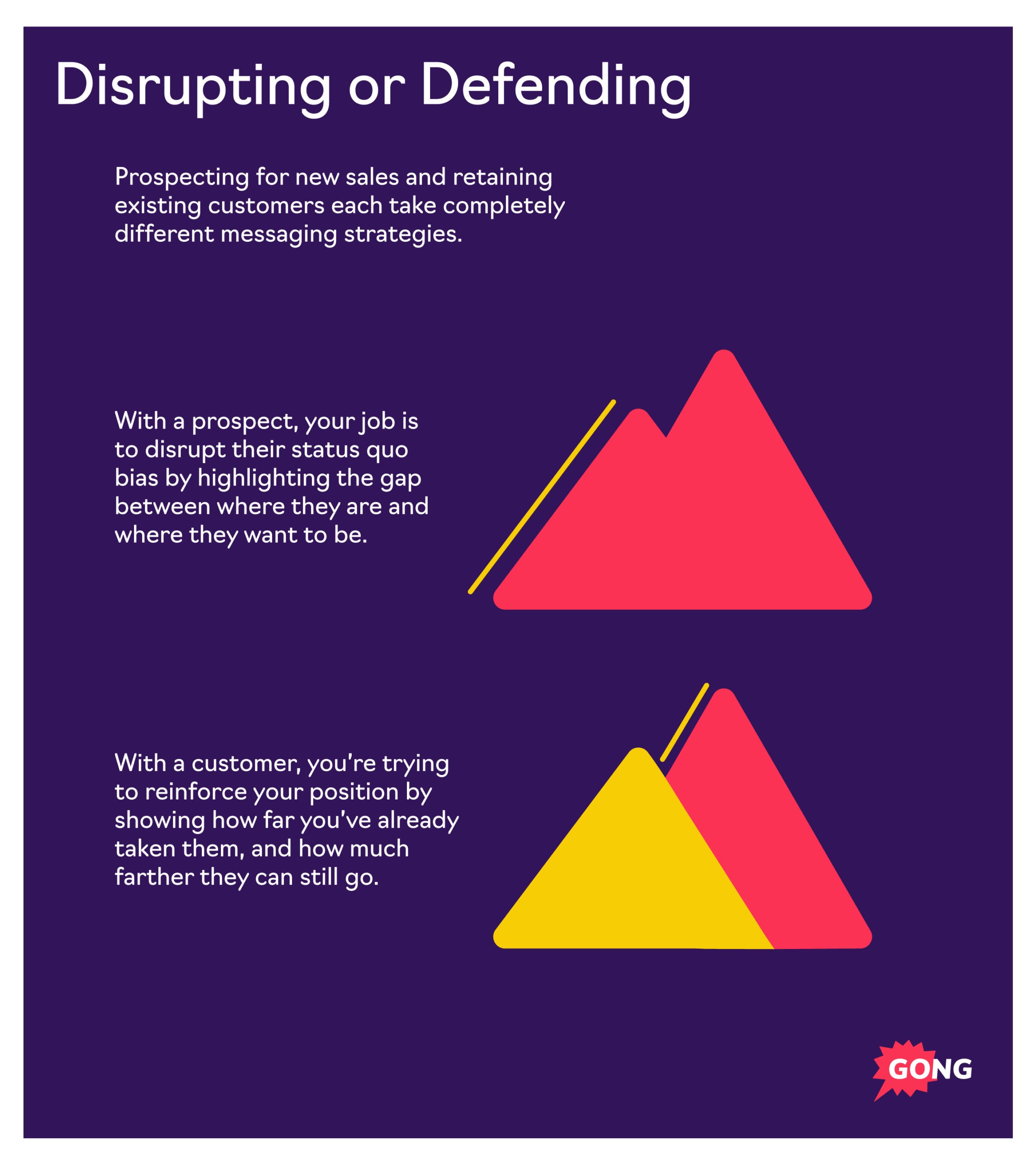 And then, they must submit themselves telling that story. Record it, submit it, and against a rubric are consultants or their managers that will review that. We have clients doing pass-fail. And you’re supposed to certify on your new product message.

So, observable practice, demonstrated proficiency, and then detailed coaching and feedback.

When you have learning paths and generalized skills training, everybody’s like, “What’s the ROI on that?” It’s going to be abstract. But if you stand up a program on this price increase, and on this issue, on that issue, and the next issue—those are tied to things that you can literally watch the meter.

The Impact of Visuals

As more companies move to inside sales, that means a lot more phone and web meetings. Well, it turns out that even outside sellers, on average, 50% of their sales touches are remote.

So here we are in an online meeting environment when it’s just phone calls and web conferences. A lot of things that have been taught to salespeople have been around “stand and deliver” type techniques, like when you’re in the room. But here you are, sitting behind a box.

And so, whatever shows up on your screen can utterly destroy everything you’re trying to do. What we find is in a room, you can put a slide up because you’re standing there, and you don’t have to change a slide for minutes. But, you need to change a slide every five, 10, 15 seconds, give or take. There needs to be something happening, whether you’re annotating on that slide, or you’re animating—building something on that slide.

The decision-making part of our brain is very simple and concrete. Many times, our PowerPoint slides take abstract, complicated topics, and only make them more abstract and complicated.

The Three Cs of Visual Persuasion

It has to have context for urgency. No one moves to something else if they don’t believe their current context is at risk.

Then you have to have contrast for value. Nobody sees value unless they can compare it to what they’re doing today and what you’re talking about. And if there isn’t enough contrast, nobody takes the risk of moving to get the same things. Whatever the visual is, you have to have clear contrast.

And then concrete. It has to look like it’s doable. A very simple, concrete visual that helps the person who’s watching go, “I could re-tell, and I could probably re-draw that story if I just had that slide.

Context, contrast, and concrete. We know those things are essential. 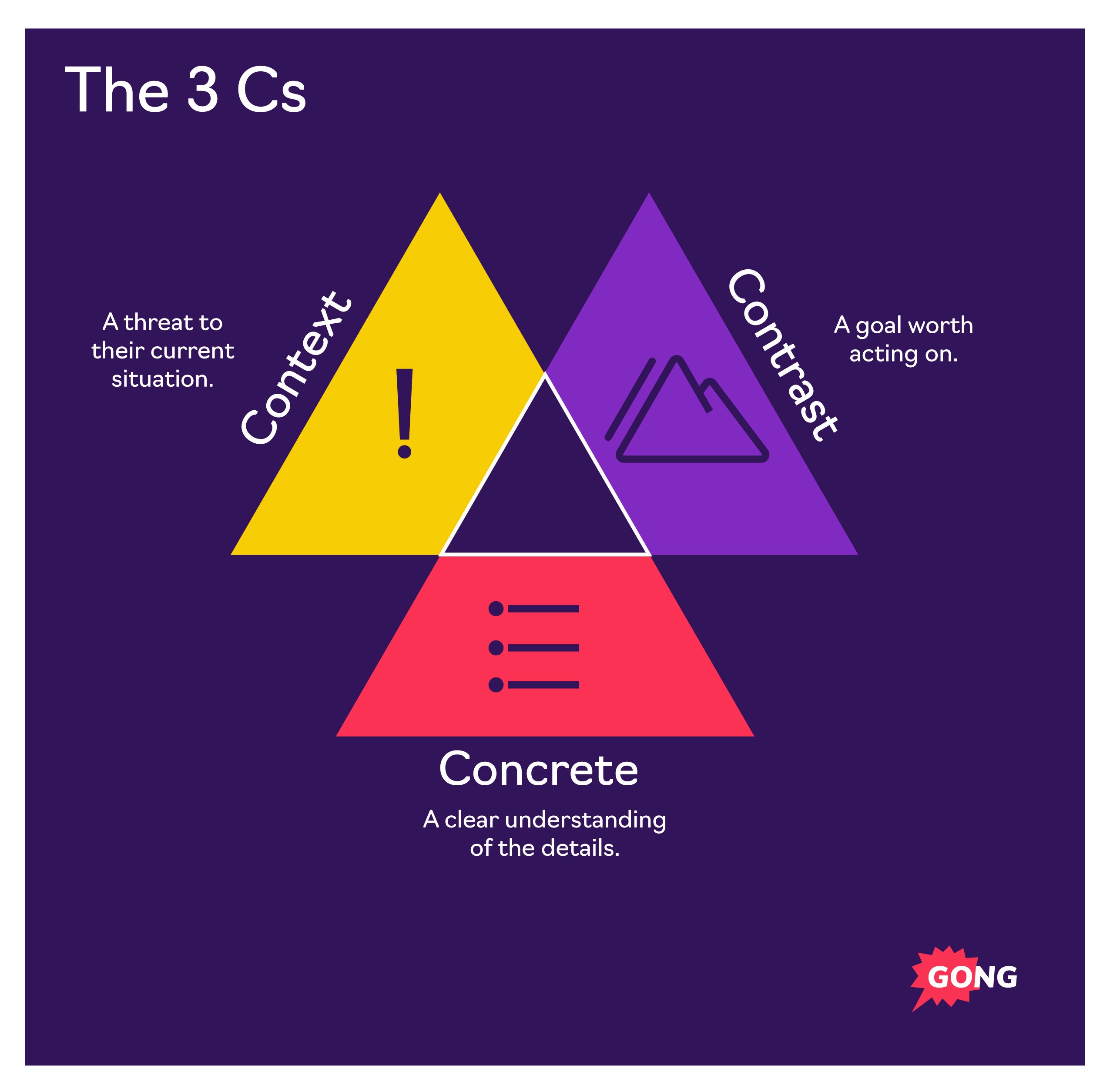 If you get some predictive or intentional type data that this person should be in the market looking for something, you might be too assumptive when you call them. One, then creeping them out. Or two, being lazy in doing the work you should be doing because you think they’re already in the market. And just kind of lose good practices in the way they should tell their story and engage the story.

Or, find out who is or isn’t using your messaging, and then be able to show them with performance metrics that it makes a difference—because we haven’t been able to make sales adoption a science. And I think that has to happen.

The Pinnacle of Modern Selling

Sellers then could win by being process experts. But now, customers are disrupting the process—they can get the information all over the place.

Then I always said it was proposition. Even the story now, a lot of companies are putting out pretty good messaging.

So the pinnacle this is going to is the person who can facilitate the decision. The person who can make meaning for the customer. And you do that by being able to help them answer the questions.

We’ve moved on from product, process, and proposition to persuasion and decision science. Facilitating the questions and answering those questions. Literally enabling the buyer. And that’s a mad skill set to have.

Sales leaders have a tendency to try to look for a magic bullet. “This year, this is what we’re going to do. And everybody’s going to go through this. And that’s going to make the difference.” I think that is complete hogwash.