The difference between your star salespeople and your “middle-of-the-pack” reps comes down to ONE thing:

Being “sold” on this fact is the first step to closing the sales performance gap between your best reps and the rest of your team.

As of this writing, our data science team at Gong.io has analyzed over a million recorded sales conversations with our conversation intelligence technology.

And you know what?

There are always STARK differences in how star salespeople conduct their sales conversations compared to their “middle-of-the-pack” peers.

By contrast, it’s very difficult to pinpoint the differences between top salespeople and everyone else when analyzing non-conversation sales behaviors (such as activity metrics).

In other words, outside of sales conversations, top salespeople and average salespeople often do the same things.

They work similar hours. They send the same number of emails. They have the same amount of discovery calls and demos.

There are very few statistically meaningful differences between the two groups at this level.

But when you look at how each group is conducting their sales conversations, differences become immediately apparent.

Here are some examples from our analyses… Notice that that’s no small difference.

Star reps also have sharply different “talk-to-listen ratios” during their discovery calls than their peers: 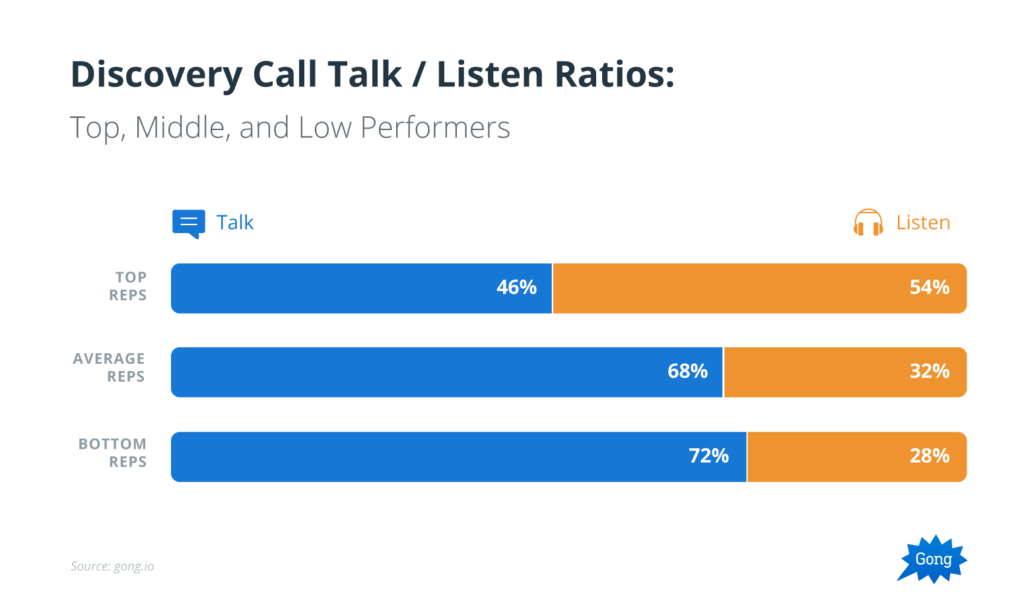 And not only do star salespeople ask more and different questions, they also ask their questions in a more balanced way than their peers do (who tend to “frontload” their questions at the beginning of their sales calls as if they’re working through a checklist): 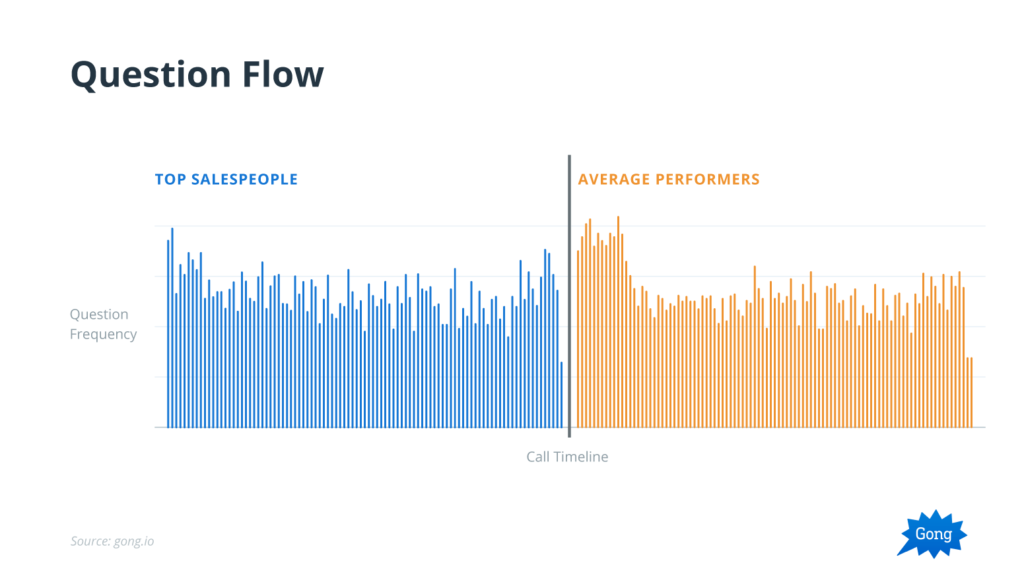 That’s certainly not all.

I could go on…

Which leads me to my NEXT point…

If you have a wide performance “gap” between the top 20% of your sales team and everyone else, it comes down to one root cause.

You don’t know the words, phrases, questions, and behaviors your top reps (consistently) do during their sales calls (and how your “average” reps are behaving differently).

If you did, you could begin to “bottle up” that behavior and replicate it to the rest of your team (no easy task, but doable with targeted coaching).

When you’re “blind” in this manner, coaching, training, and other sales effectiveness programs become acts of guesswork.

And the problem with all the cool stats above is that they are generalized out across many companies.

While still useful, your company is going to be unique.

And if you don’t know the differences that are specific to your company, the sales performance gap will stubbornly persist.

What I am saying is that without visibility, traditional solutions fall flat.

In the next post in this series, I talk about why that is.

I’ll walk you through four conventional approaches to eliminating “the gap,” and why they all fail if you’re blind to your sales team’s conversations.

Visibility is the fuel behind any sales effectiveness program.