Why do so many strategic initiatives fail?

How do you level-up B-players’ performance?

What are the obstacles getting in the way of your sales force’s success?

On a recent episode of the Reveal podcast, we connected with Jonathan Frick for answers to these and other questions that are top of mind for revenue leaders.

Jonathan is a partner at Bain, and has over 15 years of strategic sales experience helping organizations of all types and sizes maximize productivity.

There are two big insights that we’ve had from observations that we’ve made over the years, watching lots of sales forces operate.

The first one was really this idea that much of the difference between top performers and average performers, call them A- and B-players, is actually behaviors that you could teach people on and coach people to get better at.

Some of it is innate talent differences. Is someone really right for this sales role, or should they be in a different sales role?

But a lot of it is really stuff that you can teach people to do. Which is quite interesting, because obviously if you could turn a significant portion of your average people into something that looks a little bit more like your top people, that would be pretty cool for most sales forces to be able to do.

Coaching is a Critical Skill

We underestimate how hard of a skill coaching is. If you think about most sales frontline managers, they’re promoted reps. They learned how to sell really well. They got really good at their way of selling. Most companies don’t invest a lot in training them on how to be leaders, and teaching other people who might have different backgrounds, different strengths, at how to actually do what they’re good at. So it’s actually not a surprise when you think about it, that this is pretty tricky for a lot of people.

A lot of leaders forget how many other barriers they put, unintentionally, in the way of salespeople doing what they want them to do. One of the things that we found was people always gravitate towards the silver bullet solutions. If I want to get somebody to do something differently—say I want them to sell solutions not boxes, or I want them to sell value not on price. You know, all these things that many sales leaders are always talking about.

Those are easier said than done, because a lot of times the only solutions that people jump to are, “Well, I’ll just change the comp plan.” Or, “I’ll just put in a training program.” And somehow that will magically change everything.

The reality is that there are all sorts of things surrounding the salesperson that make it difficult for them to do those new things. It’s not that they don’t want to. Salespeople, more than most roles, want to earn a bigger paycheck. They want to sell more. They’re not trying to sabotage your grand plans to transform the sales force. They want to do this stuff, but it’s hard.

Let’s say they even get the training. If their manager doesn’t ask them about it every week in the pipeline review, and asks them about a bunch of other stuff instead, how much time are they going to spend on that?

If the tools suck, and don’t make it easy to do that—you want people to do account planning, but you give them a 500-page PowerPoint template as opposed to something that’s built into the CRM. You’re not really making it easy to do them.

You tell them to collaborate with other people on the sales team, but you don’t tell them who they’re supposed to work with. They don’t know the people. It’s just all these barriers that get in the way of this.

And if you really want to get behavior change consistently, the data basically says you need to systematically eliminate as many of those barriers as you can. That’s what gets people doing this stuff day in, day out, every day. You just take down one or two of them—yeah, you’ll get some movement. But you’ll get a lot of people that are just, “This is too hard. I could close a deal while I’m trying to figure this out.”

You’d be amazed how many companies [in which] people don’t even know who the other people are that touch the same account. Who from Support, Professional Services, other parts of the company are also engaged with this customer? 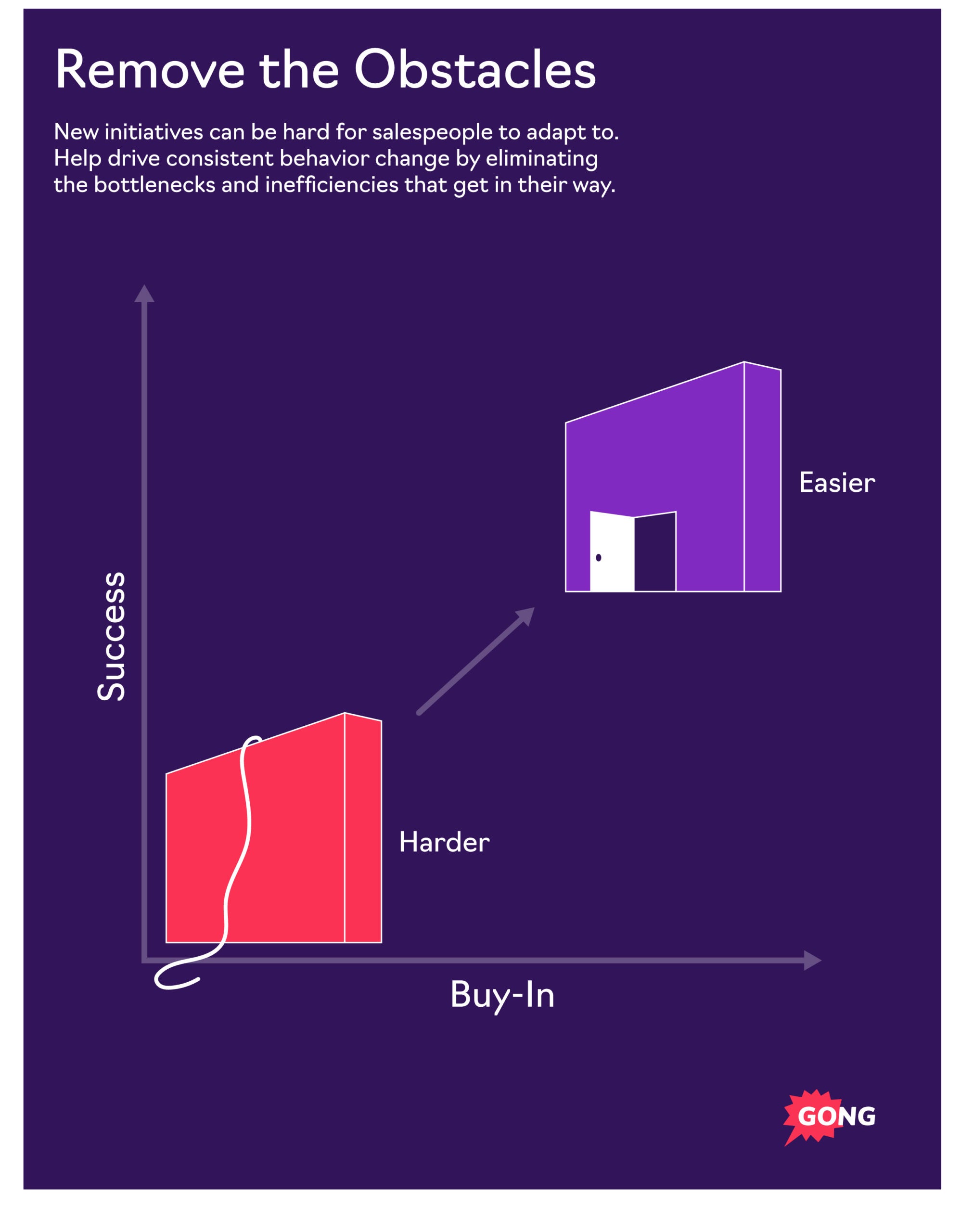 The Blackhole of Change Management

The frontline manager doesn’t have any idea how to coach the people on the new behavior. They don’t know what good looks like. And they certainly don’t know how to explain it to people.

We call it the black hole of change management in sales. Brilliant initiatives get passed down the corporate ladder, and they finally get to one level above the frontline, and everybody’s like, “Well, that’s a great idea. But I have no idea how to teach my people how to do that. So I’m going to just keep trying to yell at them to get their numbers this quarter.” 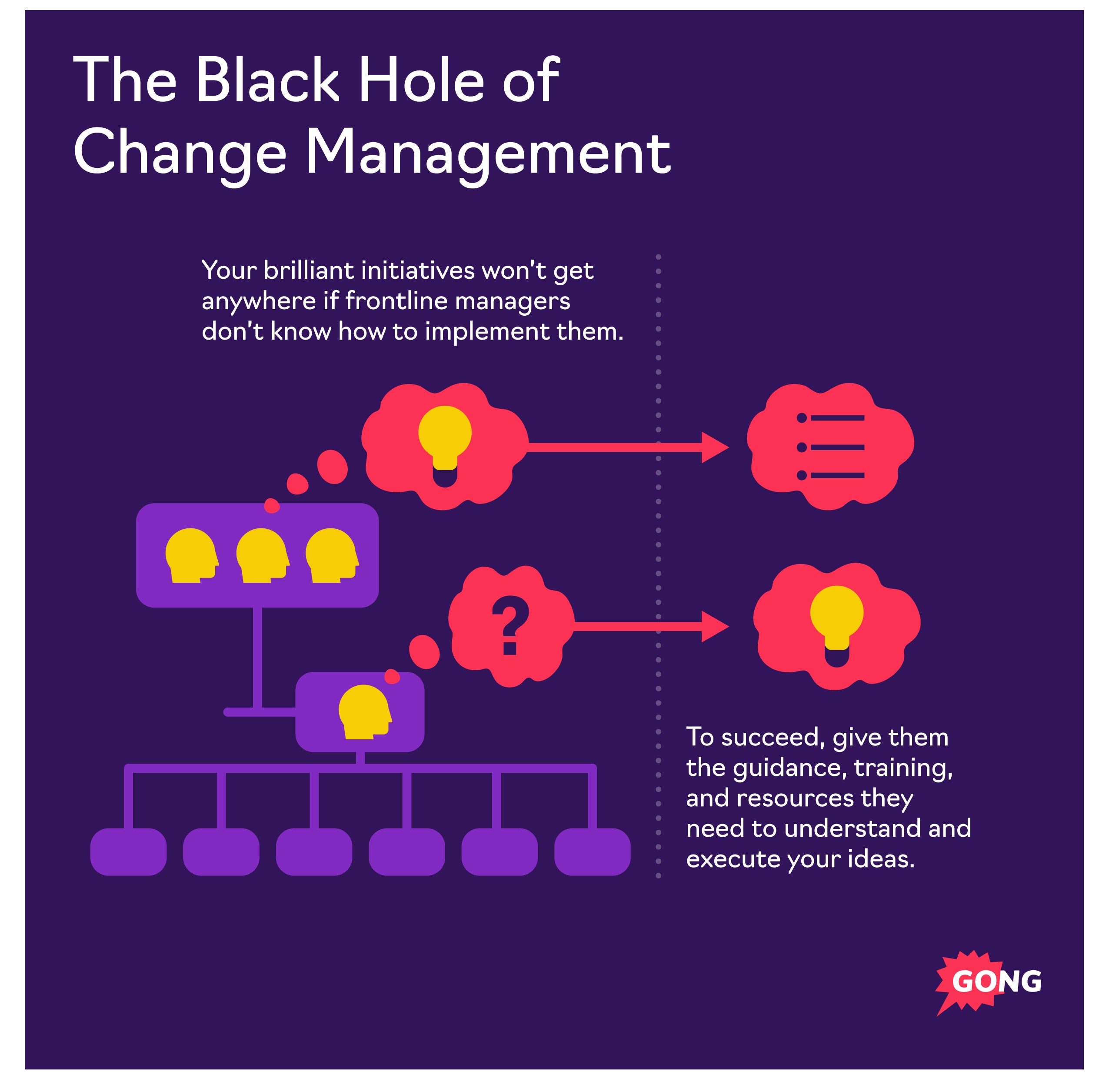 We [Bain] tend to approach this in a very agile fashion. Get something out there, even if it’s an Excel to start with. A pilot group of people. Try it. See if the salespeople like it. See if it improves their performance. Rather than spending months building some super fancy tool that’s going to somehow solve world hunger.

And that’s what you get to obviously later on. The companies that are truly world-class, of course they have very sophisticated integrated systems, fed from a single data that can tell you everything from a person’s background, to what they do every day and how that influences their performance. But that’s the destination. For most people, that’s a multi-year journey to get there. The first step is what can you do with what you’ve got, or what you could easily get without wasting a ton of salespeople’s time entering yet more things into the systems, that can really make a difference.

Following Bain’s work with an anonymized client, they isolated the change required to transform B-players into A-players. The key takeaway is how they spend their time.

Compared to their B-player counterparts, A-players spend three more hours with customers, an extra 10 minutes collaborating with specialists like sales engineers and solution architects, and an extra hour meeting with their direct manager, every week.

In addition, they also noticed that A-players completed all of their account plans compared to the 50% completion from B-players. This is especially applicable for sales leaders selling to large companies and that have complex sales cycles. Even if you only add up the extra time spent with clients, that’s an additional 150 selling hours (or about 18 days) per rep every year.

Time spent on non-revenue generating activities is a well-known plague that has been haunting sellers for years. According to Forbes, sellers only spend 33% of their time actually selling. Another way to look at it is for every dollar you pay your rep to sell, you’re paying them two dollars not to sell.

What I’m most excited about is finding more data that truly can lead to useful insights on how people can improve what they do—day in, day out. Where should I spend my time? What should I talk about with my customer? That is cool stuff to me.

The Evolution of Sales Tech

If you look at inside sales and where that is versus 10 years ago, where 10 years ago you were probably cold calling numbers out of a phone book and trying to figure out who the right person was to talk to.

Now you’ve got people who are spending 70% to 80% of the day on the phone. They’ve got systems that are telling them, “Call this person next. And they’re the CMO. And the reason you’re calling them is because they downloaded this white paper and did this demo. And they’d be really interested in this product, and these are the talking points.” I think it would be hard to argue that productivity has not dramatically climbed in some of those roles. And that people are selling stuff over the phone now that you would have never thought they’d be selling over the phone 10 years ago. CPUs, and sophisticated software, and all sorts of stuff.

But if you look at complex, enterprise field sales and consultative selling, that world has grown so much in complexity. Buyer influencer complexity. Product complexity over the intervening years. I do think that any gains that have been created by the tech in helping you navigate that have probably barely just been keeping pace with what people actually have to do to be successful at their jobs. I think it’s fair to say that it’s understandable why some people out there on the frontlines probably feel like, “I don’t know if all this stuff is really helping me.”

Getting Your Sales Team On Board

It’s also fair to say that some companies have just, to be blunt, botched the rollout of a lot of this stuff. Put out things that weren’t really tested with salespeople to begin with, and are more for the purposes of collecting data for the company than they might want them empowering people. So then people get this understandable reticence like, “Another new thing is coming out. Great. That means another 10 minutes a day I have to spend typing something into something.”

On the predictive side, by the way, I think one of the things there [with AI] is that I don’t think salespeople like black boxes, right? I think people want to know why they’re being told they should do something. Some companies have done really well with their tools. But others, it’s just like, “You should go sell this next.” Or, “You should charge this price.” And they’re like, “Why?”

If you tell them you should charge this price because 85% of your peers in an exact like-for-like deal with the same kind of customer, same deal size have been able to get away with this price, then they’re like, “Oh, that’s awesome. I didn’t know that, and now I have confidence.” But you just tell them, “Charge this price because the system says so.” They’re like, “No, my customer is telling me they’re not going to buy at that price. I’m not going to lose the deal. That’s dumb.”

Start With the Problem, Not the Tool

The advice that we always give first is—understand what problem it is you’re trying to solve. I think people jump to the tool, often like, “This tool is going to solve all my problems.” And it’s actually usually the third step, right?

The first step is, “What question am I even trying to answer?” And that may be different for different companies. Some companies, it may be all about finding the next best account that you can go after, and scoring those. For others, it may be about, “How do I get my salespeople 5%, 10% more productive every year?”

Second is, “What would it take to really make that happen?” So it really goes down more to process and behavior. It’s kind of, “How does the tool fit into that? How do I deploy the technology that would enable me to actually do those things at scale and efficiently?”

What are the interesting questions you wish you could answer that would make a dramatic difference in the performance of your sales force—that you haven’t been able to answer yet? 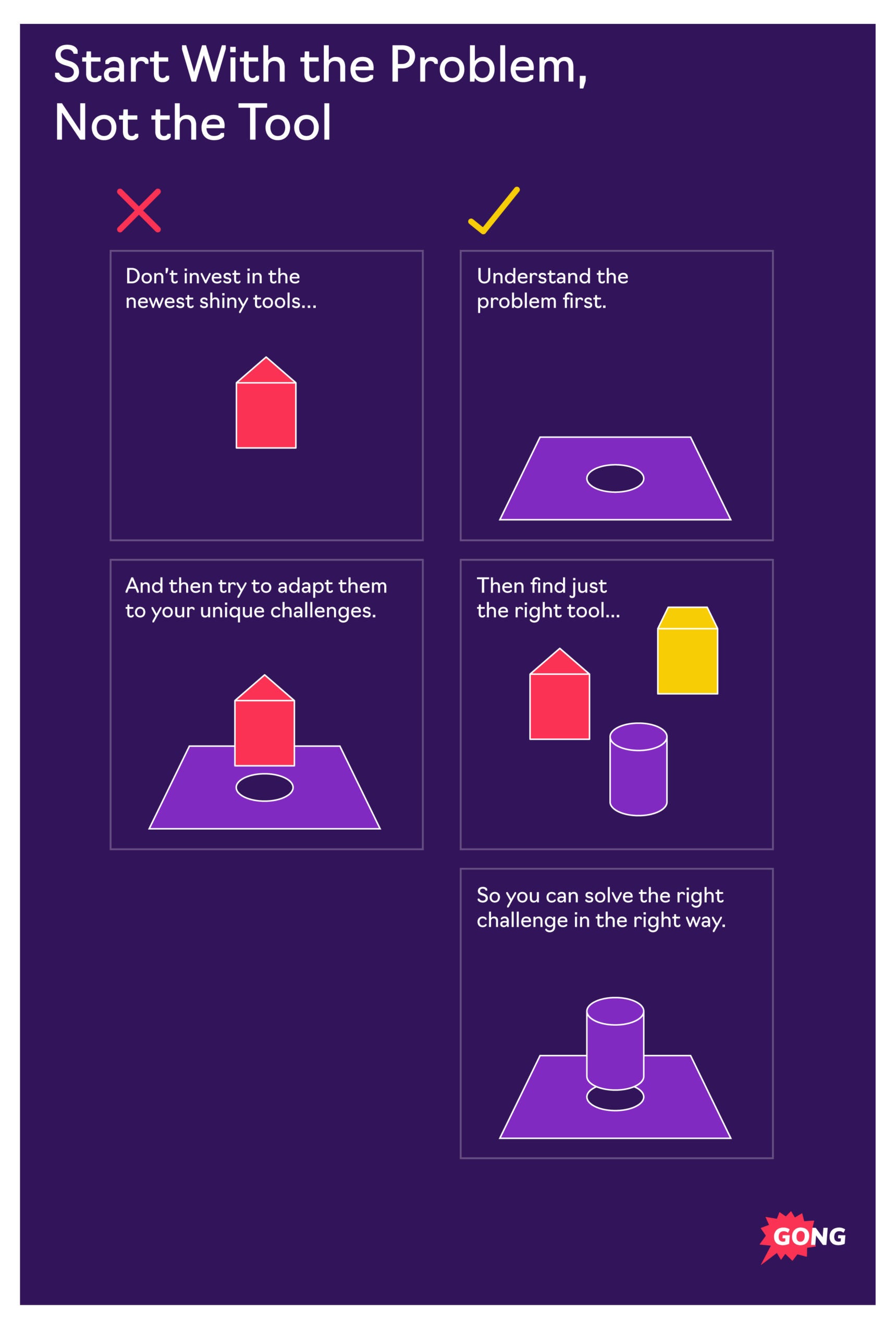