I’m excited to introduce Gong Smart Trackers—the first user-trainable system that goes beyond keyword recognition to understand the context of all your customer conversations. This changes the landscape of Revenue Intelligence, by enabling companies to better detect deal risk, quantitatively track adoption of strategic initiatives, and more.

When Amit Bendov and I started Gong 7 years ago, it stemmed from a business pain.

Amit was running a SaaS business at the time and data in the CRM indicated that deals were slipping—but Amit couldn’t tell why.

Generation 1 call recording was already available at the time. Amit’s team recorded customer calls, and when they listened to them, they were often able to figure out the root cause of issues.

But, this approach didn’t scale—no one could listen to hundreds of hours of customer conversations whenever a question needed an answer.

When we launched Gong several months later, back in 2016, we introduced a Generation 2 solution, which revolutionized the revenue space.

Gong brought about the ability to not just record conversations, but search and filter them not just based on CRM metadata but on any keyword that was discussed in the conversations: initially, video and phone calls; later, email conversations. We even created the concept of a Tracker: a set of keywords customers could create to track conversations and trends.

With this, sales leaders could—for the first time—focus on specific conversations, based on the question that needed to be answered:

Narrowing down the set of calls and using them for internal collaboration was a game-changer to revenue teams worldwide.

The challenge with keywords

As leaders started to leverage Gong more deeply, it became obvious that simply searching by keywords presented a limitation.

For example, one sales leader, Jennifer, wanted to quickly see (as part of her pipeline review) whether the prospect indicates the deal is likely to slip. Jennifer tried to come up with as many permutations of the keyword “delay” as she could. Including “postpone,” “reconsider,” and so on.

While keywords are very helpful when a user knows exactly what they are searching for, and point the typical user in the right direction, they do have some limitations.

Too many options. Too little time.

After taking the time to create a laundry list of keywords, Jennifer noticed some were missing. As a result, deals were not flagged. For example, one customer indicated that they are “putting the project on hold,” which wasn’t captured by the keywords Jennifer put in place.

On the other hand, some of Jennifer’s keywords were flagged, only to later be categorized as false positives. Like the case of a customer apologizing for a delay in joining a meeting and that being tracked by the keyword, but not the situation.

It turned out this keyword context limitation was not only applicable to Jennifer.

Other leaders were trying to put metrics and KPIs in place to find trends in the business: either looking for team members’ adoption of messaging or for changes in customer sentiment. Because keyword searches were not accurate, it was hard to turn the conversations into data and leaders still had to rely on managers reading emails or listening to calls to verify metrics.

To solve this major problem, the team built Smart Trackers. This is a new patented technology that uses state-of-the-art AI to leapfrog the need for keywords, and find concepts easily and accurately. And some even say: it’s fun. Smart Trackers identify concepts that revenue leaders care about with much higher accuracy: they find up to 80% more occurrences, with up to 80% fewer errors. 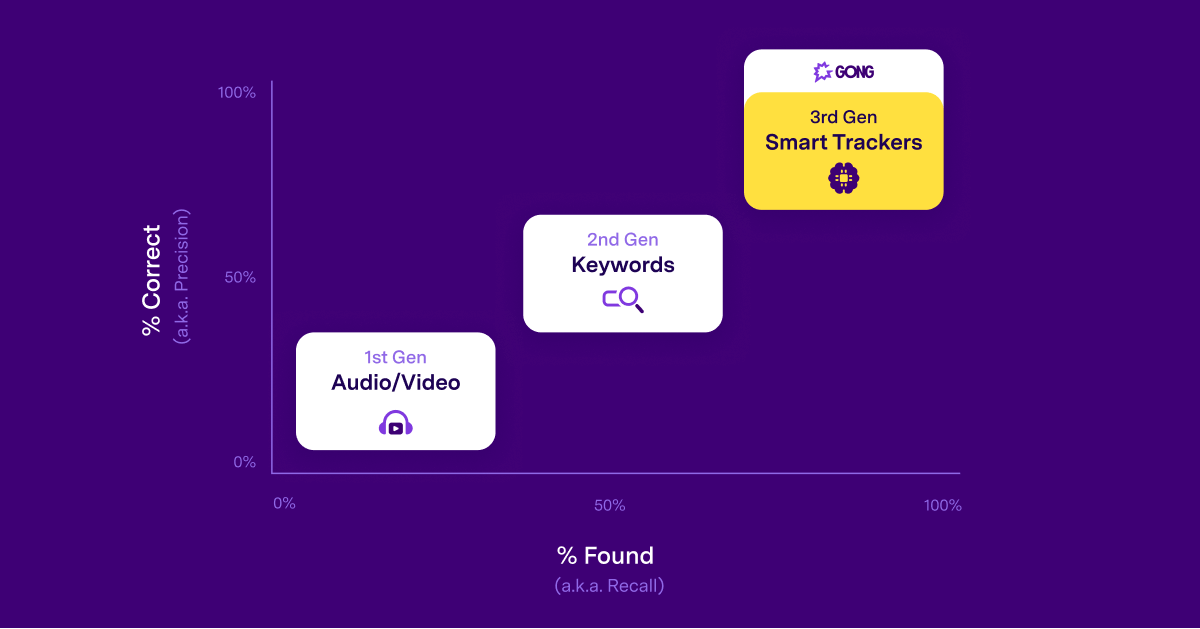 We would like to use this opportunity to thank over 50 design partners, who have used early versions of Smart Trackers. Those customers reported that they can now quickly focus on deals that truly require attention, consume relevant customer conversations, and quantitatively track adoption of strategic initiatives.

Easily build an AI engine that knows your concepts

Now you’re probably wondering how it works. Setting up Smart Trackers is as easy as it gets. You give Gong a handful of examples of the concept you’re interested in. For example: the sentences “the project might get delayed” or “it may unfortunately be postponed”.

Gong then searches all of your conversations–potentially tens of thousands of them–and suggests sentences that are somewhat related to what you started with.

Some sentences may align with the concept you had in mind, such as “My boss said we need to put this on hold for a bit.”). Many others may not, such as “Sorry about the minute delay, I was just jumping from meeting to meeting.” You teach Gong what you had in mind by simply tagging examples as “Yes” or “No.”. 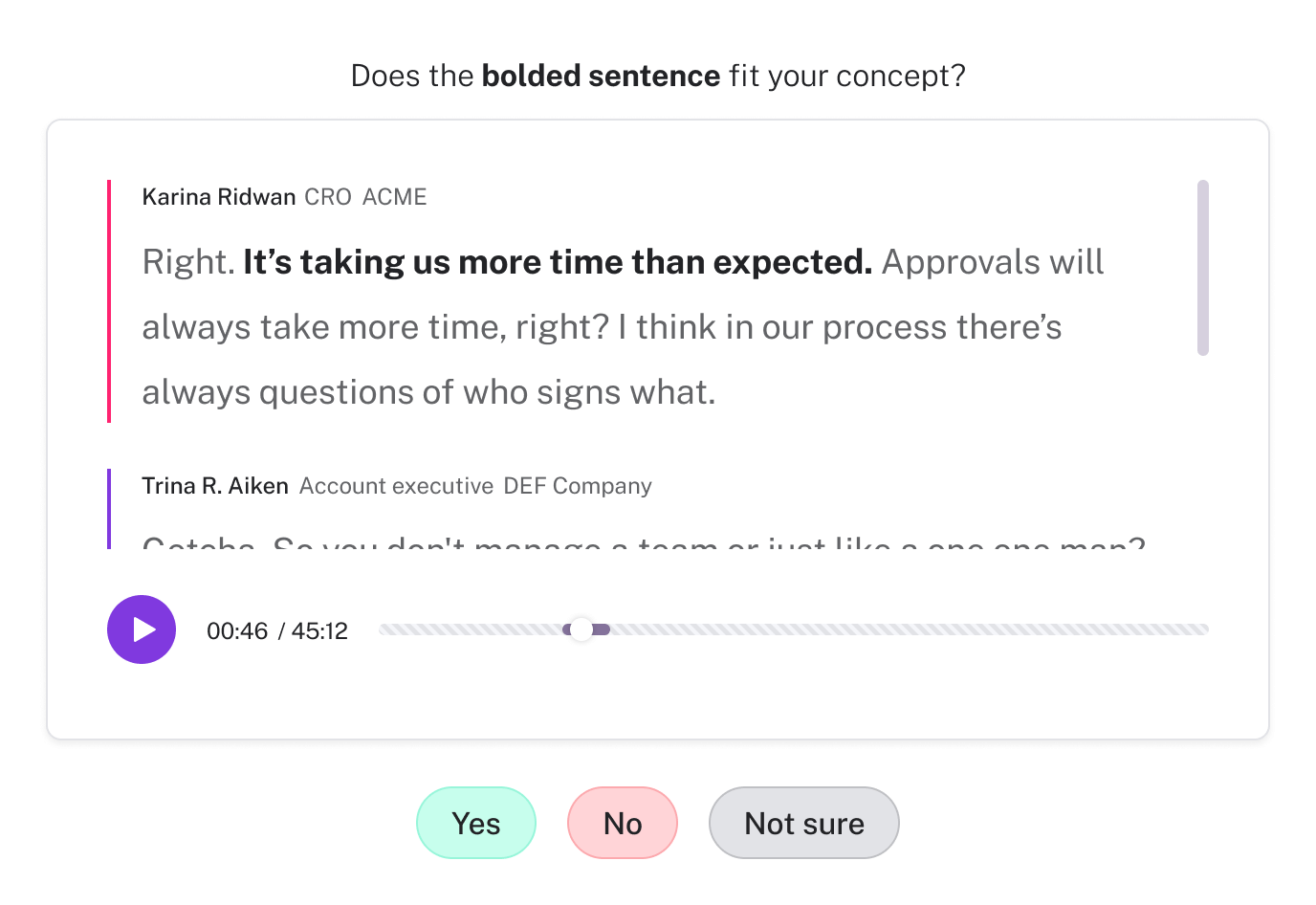 After a few rounds, Gong builds a patent-pending, state-of-the-art Transformer-based AI model that captures the concept.

And the model doesn’t only rely on specific words used in the tagged examples. In fact, it starts by scanning a huge number of documents on the Internet to understand the intricacies of human language. Only then does it map the examples it was given into a concept it can reliably identify.

The model often finds language patterns that most people wouldn’t even consider. For example: “the project was put on ice.”: 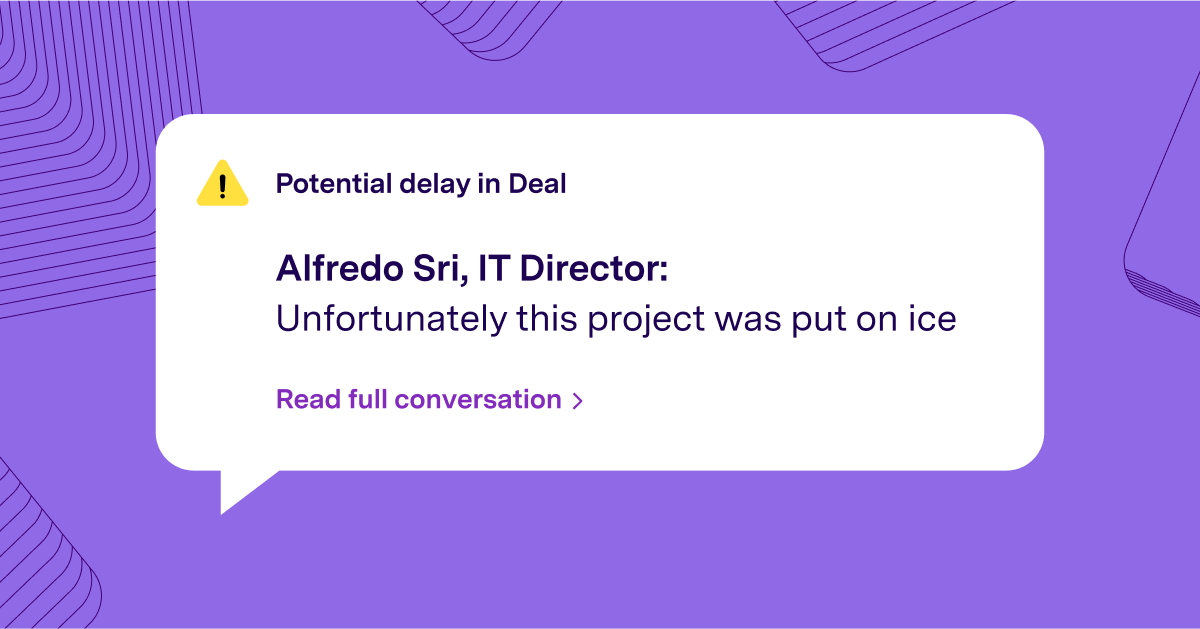 Let’s say a seller asks: “Are we progressing based on the timeline we discussed?” And the customer responds: “Unfortunately, no,” Gong would understand that this dialog implies the same delay.

Truly understand your business at scale

With this new level of accuracy, Jennifer is now able to get an accurate picture of when deals are truly slipping—and guide her team on fixing them. She can plug Smart Trackers into her Gong Deal Board to get a birds’ eye view of her pipeline, and the risks hiding within. 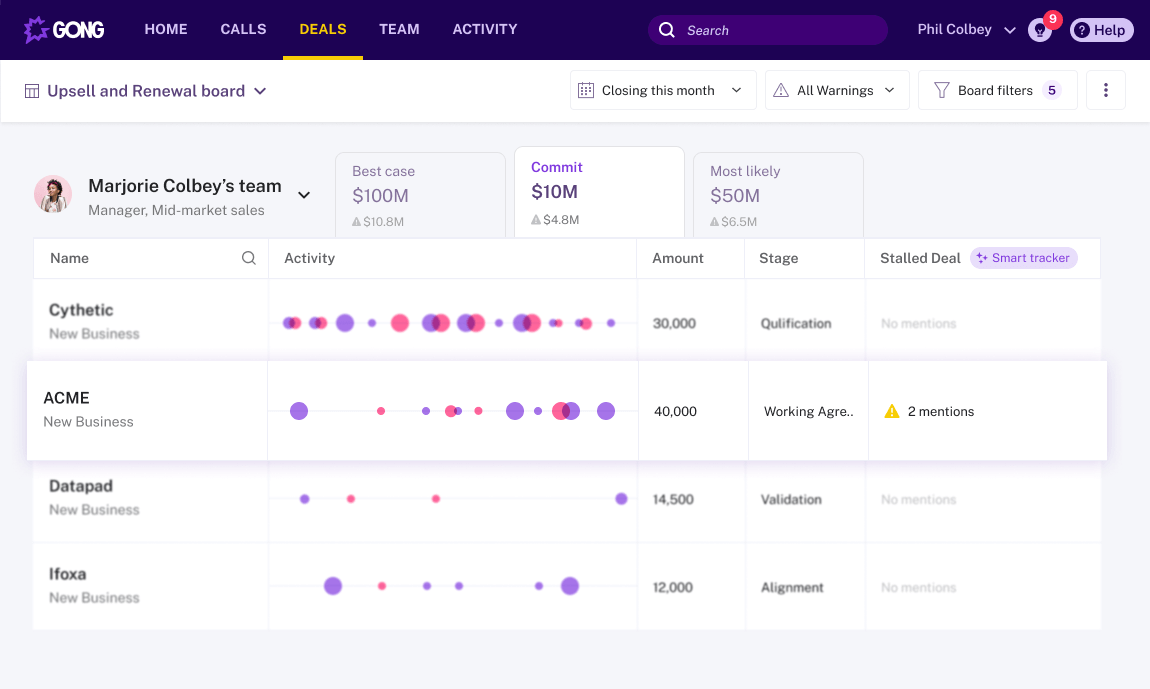 Equally important, sales leaders can now see if and how their teams are talking about initiatives: from a new product to updated pricing, or new sales messaging. Using Gong’s Initiative Board, they can quantitatively track the adoption of new messaging: they can immediately know what’s working to double down on, and where they need to reinforce. 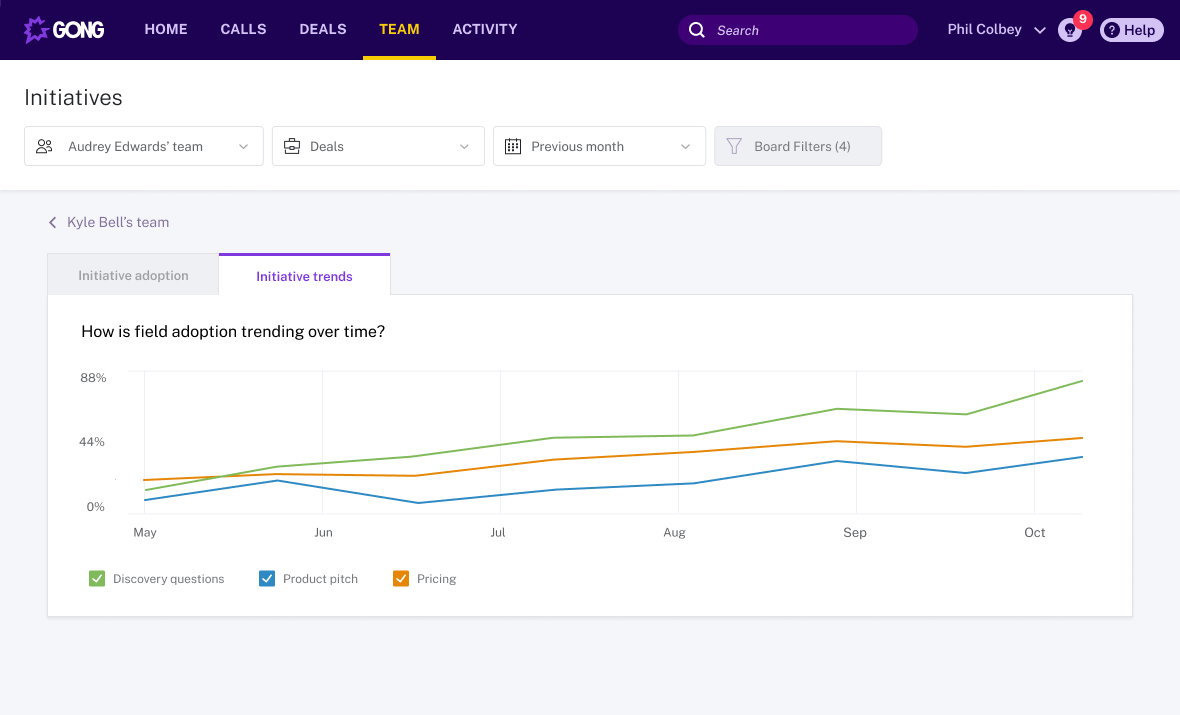 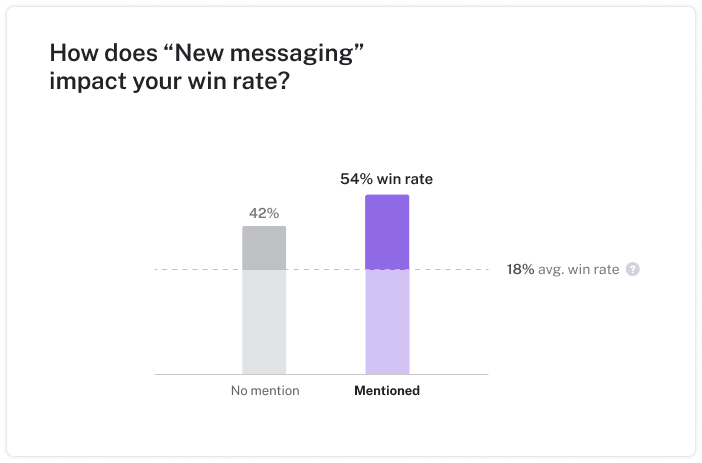 Finally, sales leaders can simply subscribe to a Stream, which gives them a live sample of conversations around concepts they’re interested in.

Take it for a spin

Gong’s Generation 3 conversation understanding is a game-changing moment in how revenue organizations operate.

If you are operating a revenue organization, join the dozens of customers who’ve partnered with us during the early stage and take this new technology for a spin. Learn more here.

It will revolutionize how you understand and run your business.