How can sales leaders prepare for the CEO role?

What does brutal honesty mean for sales leaders?

On a recent episode of the Reveal podcast, we connected with Dave Mattson, CEO of Sandler Training, for answers to these and other questions that are top of mind for revenue leaders.

The Evolution of Sales Training Technology

I think the big one that’s going to be a game changer for Sandler is that the world’s going to voice. So we have all this technology that’s going on. And from a training perspective, I’ve got to stay ahead of the puck.

We have an online platform that people can log on to. And I’ve got hundreds of thousands of people in this, and it’s great. But the key phrase is—you have to log on to it. People want content and whatever modality they want, whenever they want it. And they also maybe want it in a 45-minute chunk or a four-minute chunk.

So we have moved all of our training assets over to voice. You can simply now just say, “Alexa, I want to hear a podcast with Dave Mattson,” or “I want to hear X,” and it just instantaneously comes up.

I needed the absolute best salespeople and best sales leaders to be training our clients. Because otherwise, if you know somebody hasn’t carried a bag, or they never made a cold call, and they’re teaching a prospecting course, you’re like, “Really? Let me see you do that.”

Preparing for the CEO Role

I think if you want to become a CEO and you’re a sales leader, you should start paying attention to what they’re doing. Say you have two tasks now. You’ve got to do a good job in your own world. Most sales leaders don’t come into their position being trained. Most of them are promoted because they’re good in the field.

And then the leader says, “Hey, good luck to you. I’d like you to replicate what you’ve done. Make sure these other 50, 60 people act like you’re doing, and we’ll just be awesome.” And they’re trying to figure out their own job.

But the challenge is, you’ve got to take a look at what the CEO is doing. I would pay attention to what they’re doing and then talk to them. And don’t just talk to them about, “Hey, how cool is it to be a CEO?” but “What are your day-to-day challenges? How do you think about X, Y, and Z?”

Because what you want to figure out is—how do they process and how are they thinking about things? And not just the person you’re working for. I think you should go to others as well. There are plenty of books out there that can help you prepare to become a CEO. And once you understand what some of the responsibilities are of a CEO, then I think it’s your responsibility as a sales leader to go out and start getting those experiences. 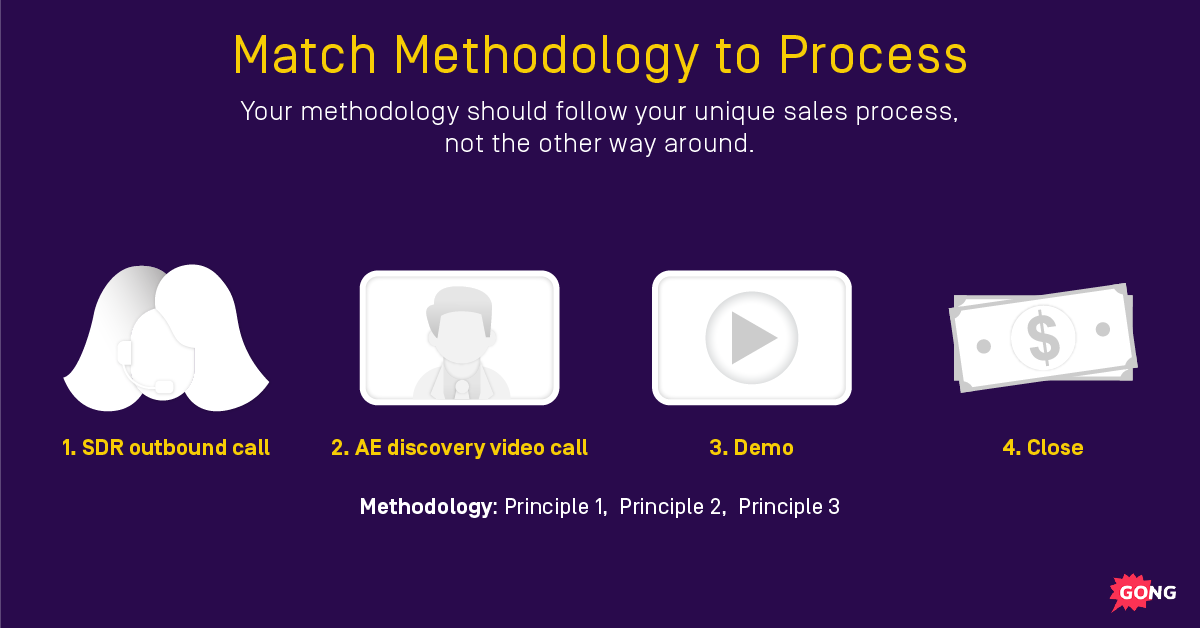 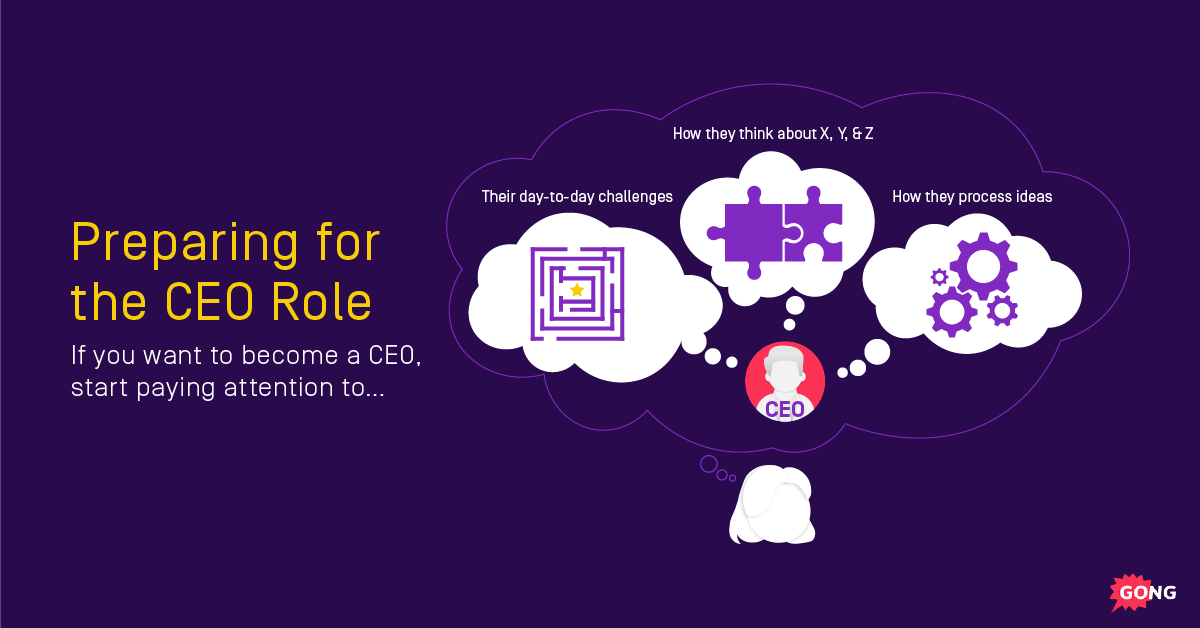 Most people actually don’t give feedback, and most people don’t ask for feedback. We kind of live in this, “No one’s saying anything. So, I guess I’m doing a good job.” We touch in once a week or once a month, and we’re talking about the numbers, but we’re not talking about personal improvement.

So I think you have to take it upon yourself to say to the people that you work for, “What are your top five expectations of me?” And then write them down and make sure that you clearly understand them, because you have to validate what you’re doing.

Then I would do monthly check-ins and say, “Zero to five, how am I doing?” And have them give you brutal feedback.

When it comes to your sales team, that’s a little dicey, right? Because you don’t want to go there completely vulnerable. You want honest feedback. You can tell based on the interaction, because if you’re communicating and people feel safe, then they’re going to come and talk to you.

If you realize that no one’s really bringing the difficult things to you, or no one’s coming in, closing the door, and asking your advice—that could be a signal that they don’t have that relationship with you. And then you have to ask why.

Probably 90% of the population is just trying to figure it out. Because we find ourselves vulnerable if we ask for help or if we say, “Hey look, I just don’t know.” I think you could say that to your sales team without saying, “I have no idea what I’m talking about here.” You could say, “There’s a lot of ways to solve this. Let’s do a quick brainstorming session. What do you all think?”

From a training perspective, we do tons of role play where we actually show people how to use the things. Because I think people have to practice before they get into the real situation.

The success triangle is that we’re working on three areas—behavior, attitude, and technique. And what separates us is everybody works on technique.

And listen, we have it. We’re known for tactics. That’s great. But what really makes it stick so you could use it is the behavior and attitude stuff.

So when you’re talking about prospecting, sure you give them all the tactics. And then you say, “Here’s the mindset that you have to go into it with.” And you talk about that it’s okay to fail.

I think good salespeople are behavioralists. If they just do the little bit each day that it takes to be successful, it’s not overwhelming. It’s kind of like running. I hate running like anyone else. But if you say you’ve got to run 20 miles a week and I wait until Friday to do it, I’m not gonna do it. But if I just did a little each day, it’s kind of simple. I think that’s the way it is in sales, and it’s the way it is in sales leadership as well.

Look at all the awards that we’ve won in the past. That means nothing. That’s the past. That doesn’t guarantee your success in the future. If you want an award in the future, then you better figure out what that environment looks like, and then be willing to change.

Match your methodology to your sales process. Sales process is awesome—the Sandler method is a sales process. But your company sells differently than another company. And I think the sales leaders and Enablement have to figure out how to integrate the methodology into the process that they’re following.

It’s the responsibility of methodology to go into process. You shouldn’t change your sales process to accommodate methodology. It sounds intuitive, but I would tell you seven out of 10 companies don’t make that connection.

Pre-call planning by itself is super important. By doing pre-call plans, you’re actually shaping what people are saying before they go. Which means if they’re not doing some of the things that they’ve learned, now’s the time to say, “How are you going to address X?”

“Okay. But when we went through XYZ methodology, we learned this. Wouldn’t that fit?”

And that’s how you’re helping them make it part of their everyday life. Debriefs are cool, but it’s already happened, right? My son can tell me he got an F in math, but it’s already done. But if he comes to me ahead of time and says, “I’m not really sure what to do on this,” I can help him study. And that’s really a sales leader’s or Enablement’s job—to help us make it part of our DNA.

Dave is the guru when it comes to sales training and rolling out sales methodology, and he provided great pieces of advice for a successful rollout.

It’s not an overnight change. Rolling these things out is a journey. According to Aberdeen Group, 20% more sales reps achieve quota when their team implements post-training reinforcement. But of course, you need to focus reinforcement training around the most critical aspects of the sales training that will move the needle for your business and produce long-term behavior change.