Sales demos are often the most pivotal moments in the sales process.

Hopefully, before your product demo, you’ve done a solid discovery call with your customer.

What you talked about during discovery will dictate your sales demo flow (more on that later).

The data science team and I at Gong.io analyzed 67,149 sales demos to understand the anatomy of sales demonstrations that sell.

It took us 10 weeks of painstaking analysis to do it.

Every sales demo included in this study was conducted on screen sharing platforms like Zoom and GoToMeeting, where they were recorded with speaker separation.

The recordings were then transcribed from speech to text and analyzed against their sales outcomes (in the CRM) using our machine learning engine to identify common patterns of successful (and unsuccessful) sales demos.

Data can’t answer every question about the effectiveness of product demos, and every sales organization is likely to have a different demo strategy.

But that didn’t stop us from finding common patterns that span almost all sales demos that eventually lead to a closed deal.

But first, let’s explain what a sales demo is.

What Is a Sales Demo?

Winning sales demos effectively demonstrate a product or service to a prospective client. A sales demo is an important part of the sales process.

Before we get into what good sales reps do right during a demo, let’s start with what they often get wrong.

What NOT to Do During a Sales Demo

Now, onto what to do.

The AI that analyzed these sales demos is able to identify specific topics that were discussed throughout each call.

What we found is that winning sales demos mirror the topics that were discussed during discovery.

Presenting a product dmeo is nothing more than mapping your solution to the priorities, problems, and goals you learned during discovery.

The ideal sales demo flow, or presentation sequence, maps directly to the topics you covered during discovery:

In other words, the first part of your product demo should correlate with the business problem you spent the most time on during discovery.

The second part of your sales demo should correlate with the business problem you spent the second most time on during discovery.

This is called “Solution Mapping.”

Many salespeople do the opposite, saving “the best part for last.”

Here at Gong, we call this the “upside down sales demo.”

It’s the first principle of doing sales demonstrations that sell.

Successful sellers do not “wing” their product demos. They have a thought-out demo strategy and follow a methodical, planned out, cerebral demo structure.

But, the best reps are some of the most methodical and strategically-minded people in the business world.

Here’s how I know.

During our sales demo analysis, we mapped out conversations to see which topics were discussed, for how long, and when.

The topic mapping for a typical sales demo looks something like this:

Now take a look at the image below.

They go from topic to adjacent topic, in a planned, well thought out manner, giving a smooth feel to the overall demo.

Average reps, by contrast, “jump around” topics during their demo in a disjointed manner with no clear demo strategy.

There’s little rhyme or reason to which topics they discuss, and when.

You may be wondering how long your sales demos should last.

The next thing we discovered is that successful sales demos are 30.5% longer than unsuccessful demo calls (47 minutes versus 36 minutes): 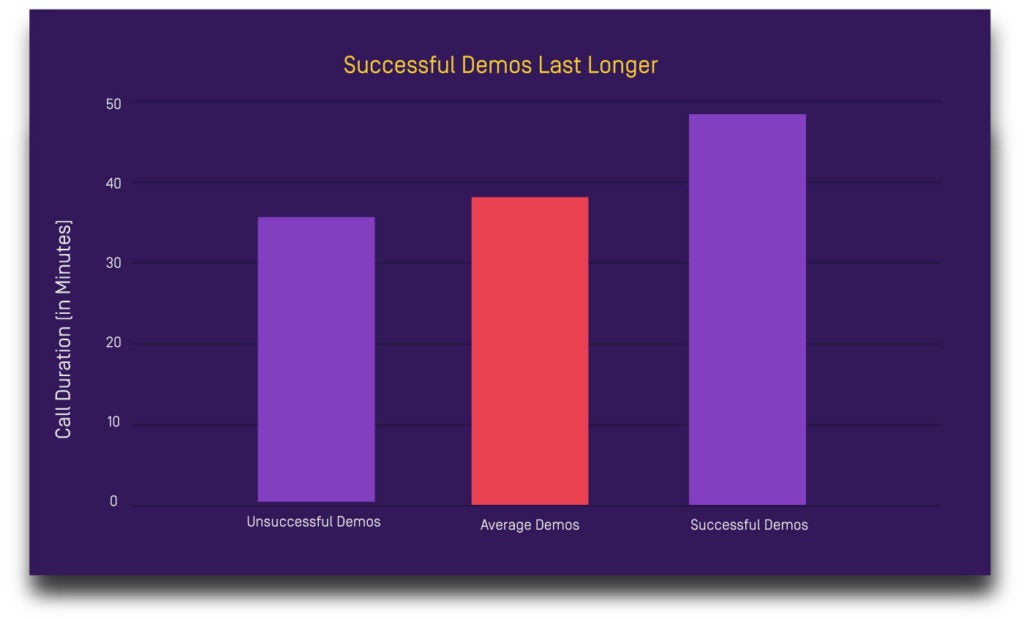 Be careful with the conclusion you draw here.

More likely, the duration is due to the sales demo being so targeted and resonant, it stimulates a robust conversation that makes the call last longer than usual.

Later in this article, I’ll present data that supports this hypothesis.

For now, here’s the conclusion I’d recommended forming: don’t do long sales demonstrations for the sake of length, but make your sales demos so crisp and targeted that they naturally prolong the length of the call by stimulating conversation. 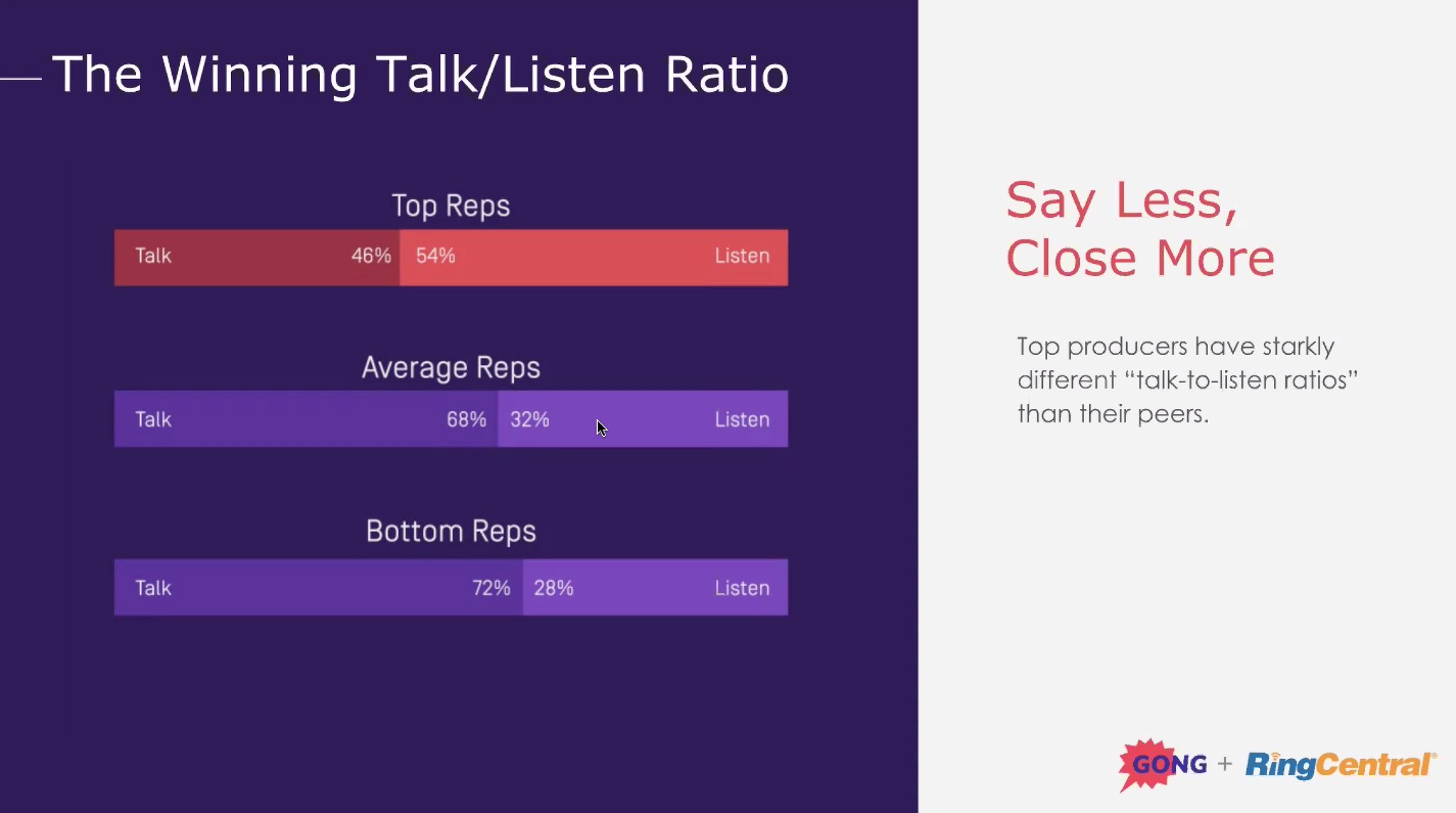 Unfortunately, the average “talk-to-listen ratio” for unsuccessful demo calls is 66:34.

That’s not enough of a difference to be actionable.

But here’s where it gets interesting.

While unsuccessful product demos still achieve a reasonable talk-to-listen ratio, they tend to have long, uninterrupted pitches that can last up to 106 seconds.

Successful sales demos are still “rep-heavy” in terms of who’s speaking the most, but they involve shorter “bursts” of pitches that frequently start and stop, allowing the customer to chime in.

We didn’t find a single demo that lead to a closed deal in the analysis that involved more than 76 seconds of interrupted pitching.

With unsuccessful sales demonstrations, long stretches of uninterrupted pitching were a common occurrence.

As a result of this pattern, successful sales demos have 21% more “speaker switches” per minute, signaling there is much more back-and-forth dialogue taking place than outright pitching.

deliver your pitch in short sprints, not long marathons.

What surfaced during the latter part of our analysis were four “acts” or “phases” successful product demos tend to consistently follow.

First, you’ll want to set the context of your sales demo.

Winning sales demos start off by talking about industry problems, narratives, and overviews.

Product demos that lead to closed deals set the context before jumping into the product. 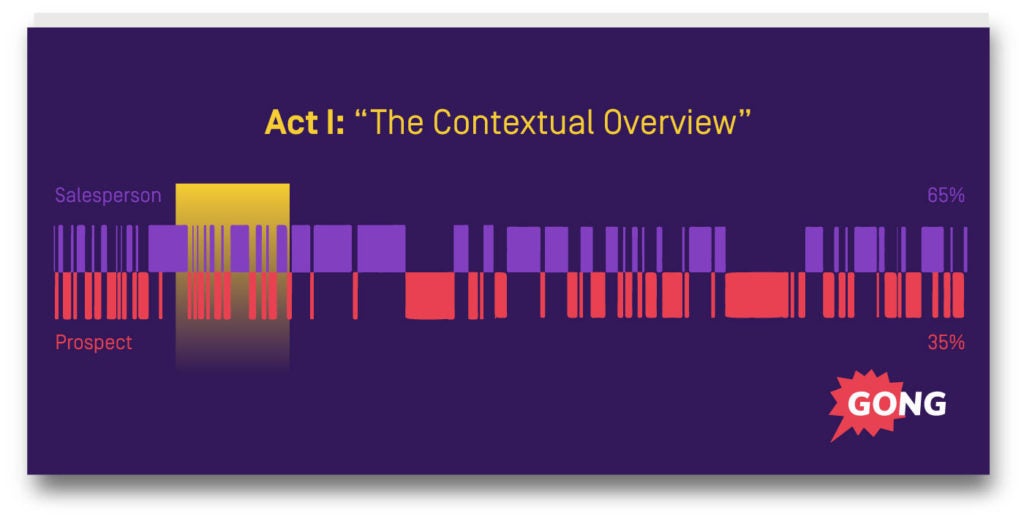 The topics that arose most frequently during the first 10 minutes of successful demo calls were context-building topics: industry problems, narratives, and overviews.

After the initial small talk and greetings of the web conference, account executives who conduct compelling sales demos prime the prospect with a “contextual overview,” usually lasting less than two minutes.

They give the prospect the needed knowledge and context for the demo itself to:

A) make sense, and

The best way to do this is by telling the story of the problem you solve, or the narrative that caused your company to come into existence.

Zuora does a great job of this when they explain “the subscription economy” before explaining the details of their product.

Demonstrating a product and its benefits without the required context in place will give the impression that you have a solution in search of a problem, which is not a successful demo strategy.

As we covered earlier, research revealed that successful sales demos are most commonly conducted in an “upside down pyramid” manner.

They start with the conclusion, rather than end with it.

That part of the sales demo usually happens as the “second phase.” 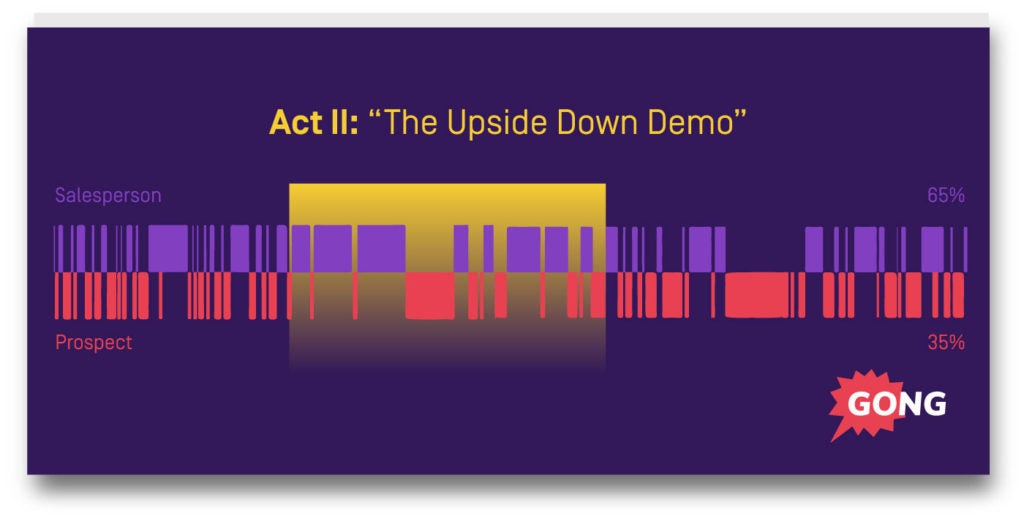 Remember earlier when we talked about “speaker switches per minute”?

A strong sign that a sales demo is going well is the rate of back and forth discussion gradually accelerates as the demo progresses further and further.

In other words, effective demos begin as a pitch and slowly evolve into a strong back-and-forth dialogue.

In successful sales demos, the average “speaker switches per minute” increases by 36% during the second half of the call. 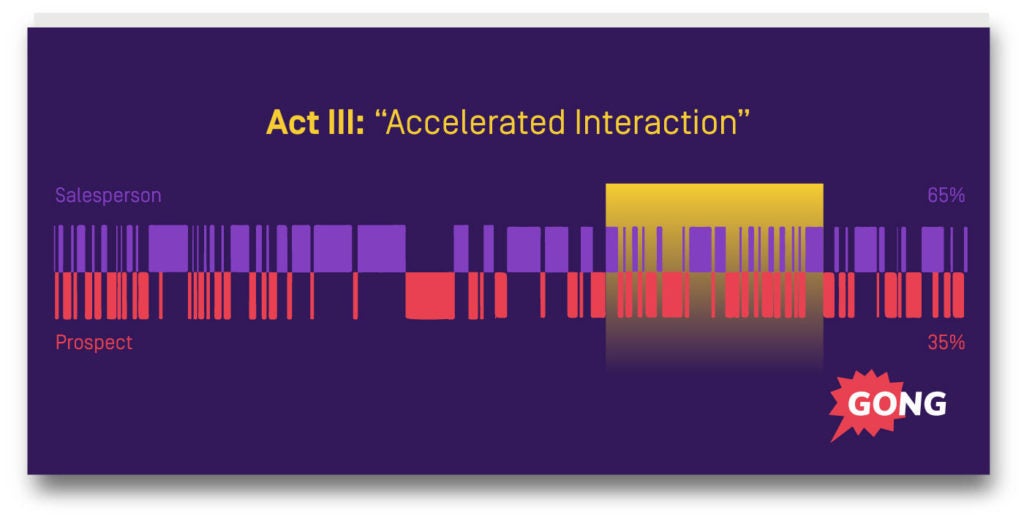 If I draw on my own experience and observation, this is when you’ve educated the customer enough for them to engage you in a strong dialogue.

They have questions. You have to handle objections. Their heads are spinning with possibilities.

The conversation has shifted from a presentation, to a robust dialogue between two people working through some tangible issues and logistics that need to be addressed.

Everything up to this point has set you up perfectly to wrap up with pricing and next steps. 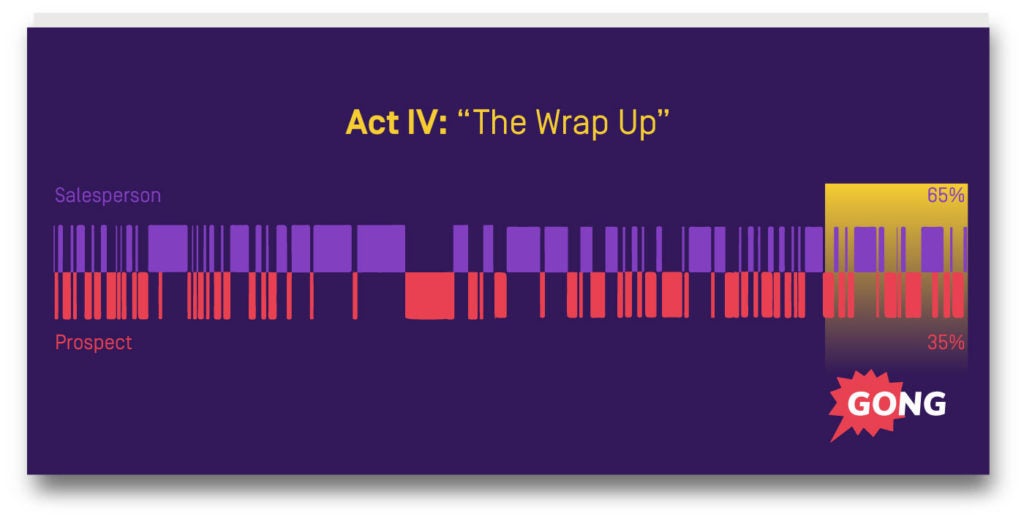 At the end of successful sales demonstrations, “pricing,” as a topic of discussion, is brought up between the 38 and 46 minute mark of the call on average.

Unsuccessful demos have no clear time window as to when pricing is consistently discussed. 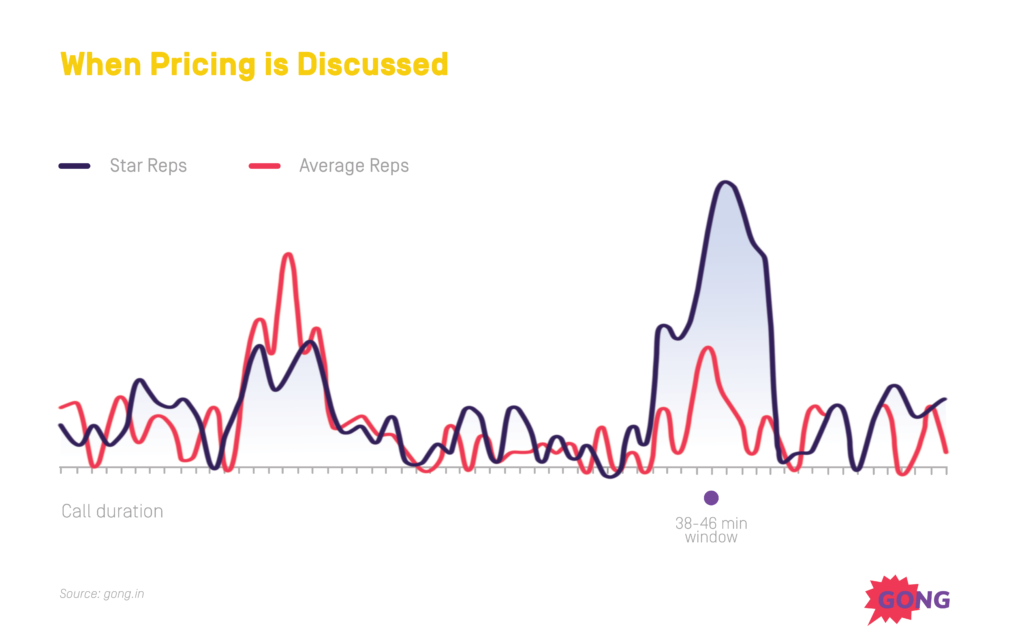 The pricing discussion in less successful demos is less smooth.

The customer may be confused about the pricing, or just flat out not agree with it.

As a result, more time is devoted to discussing it in unsuccessful sales demos. 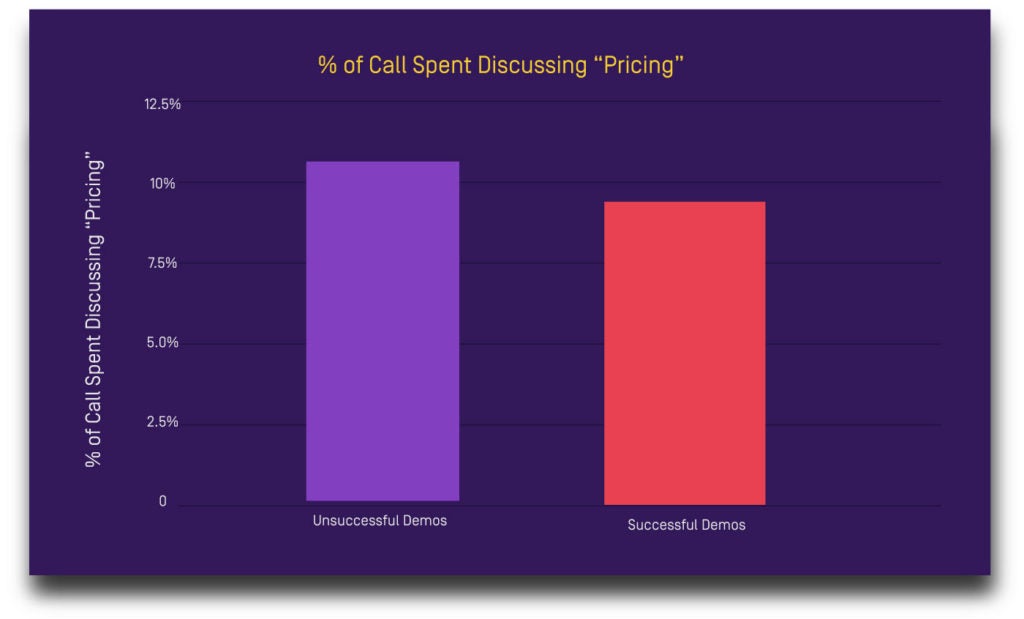 That could be interpreted as a symptom that you’re not explaining your pricing model in simple terms that the customer can immediately understand, hence the extra time spent discussing the topic.

If it takes you more than a minute or two to explain your pricing to a customer, you likely have some “rework” to do to make your pricing explanation more simple.

Solidifying “Next Steps” at the End of Your Sales Demo

Finally, winning product demos involve 12.7% more time devoted to discussing “Next Steps” at the end of the call, reserving plenty of time for the sales rep and the customer to hash out the logistics involved in moving the deal forward.

This translates to roughly four minutes spent on planning next step logistics. 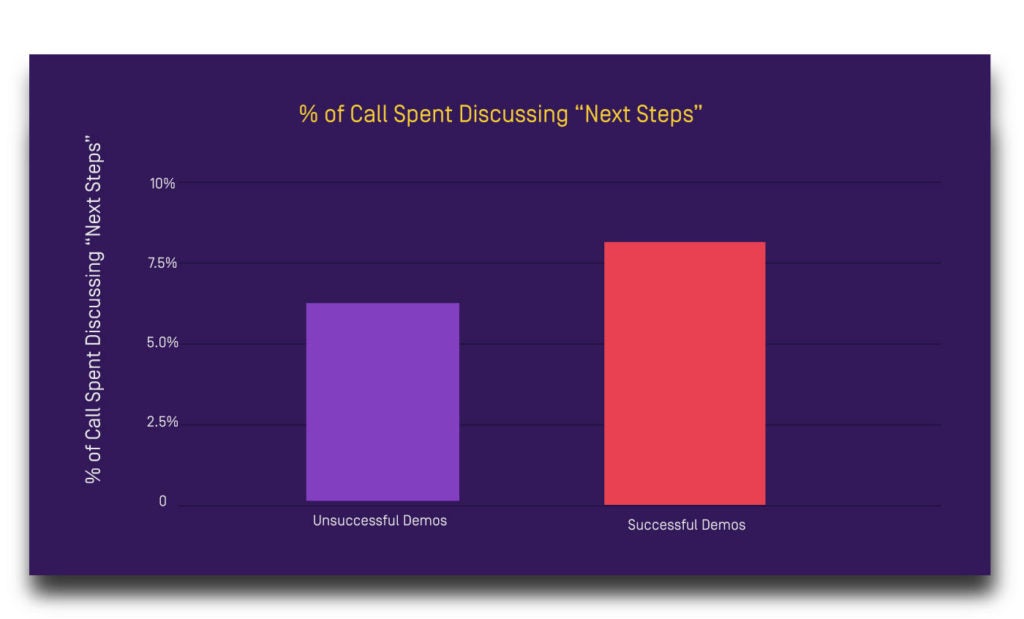 I see the opposite of this all the time.

Reps who consistently struggle with converting deals to the next stage simply run out of time at the end of the call.

They try to “pencil in” the next step while the customer is desperately trying to get off the demo to be on time to their next meeting.

So how do you ensure you solidify next steps on every sales demonstration?

The best way I know is to get agreement upfront.

At the beginning of the call, set an “upfront contract” with your customer.

“By the end of this call, I’d like you to be in a position where either 1) You see the value in this, and we plan a concrete next step, or 2) You don’t see the value, you’re upfront with me about that, and we go our separate ways. Is that fair?”

When you set your sales demos in this way, you’ve just received permission from your customer to solidify next steps at the end.

Giving a sales demo without reserving time to plan next steps makes you a 1-to-1 marketer, not a professional salesperson.

Alright, you’ve learned everything I have about sales demos (for now).

But a winning sales demo strategy is easier said than done.

That’s why we turned everything you read in this post into a free, printable cheat sheet. 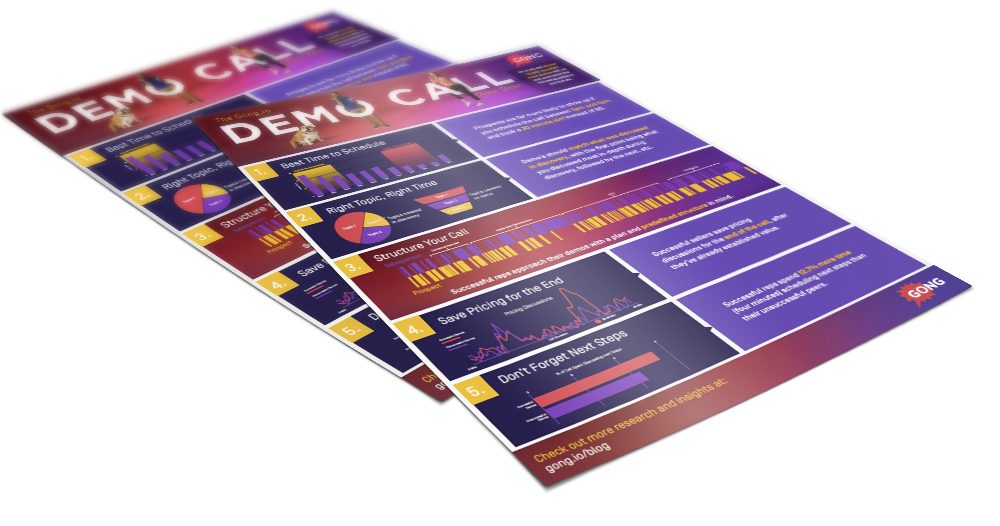 Download it, print it out, and tape it to your wall.

It’ll help you reinforce everything you learned about what makes winning sales demos.