In the Gong Labs series, we publish what we learn from analyzing sales conversations with AI. Follow me to read upcoming research.

I’m not a natural salesperson. I had to learn to sell manually.

And I’m going to tell you about the time I went from good to great in sales.

It happened in July 2014 during a one-on-one with my sales manager.

“I can almost hear your mind racing during sales calls,” he told me.

“You’re not listening. You’re scrambling for what to say next.”

During sales calls, my mind bounced between the hundreds of sales techniques I knew.

I was always analyzing which technique to deploy at every turn.

“My advice,” my sales manager said, “is to turn on your webcam. It’ll feel awkward, but it’ll force you into the moment.”

How a Webcam Can Catapult Your Sales Career

Turning on my webcam made me squirm at first. I hated seeing myself on video.

And I suspect prospects felt it was awkward, too.

But over the next two quarters, I watched my ranking on the sales team pecking order dramatically climb.

But not for the reasons you’re probably thinking.

Sure, turning on my webcam during sales calls forced me to look my prospects in the eye.

Instead of darting around, scrambling for what to say next, I listened. Just like my manager suggested.

And sure, something similar likely happened with my prospects.

Knowing their face was displayed on my screen, they couldn’t pretend to listen while playing Solitaire on their iPhone.

But as you’ll see below, those were minor causes in the success I had generated.

Before we get into the overlooked, true cause, let me address what some of you might be thinking:

Chris, is video really proven to help you sell? Or was your situation just a coincidence?

In other words, is there a chance I just happened to have a few good quarters at the same time that I started using my webcam?

[Before you read on: Here’s a 9-point checklist for having great video calls. Click below]

It turns out, my success with using my webcam on sales calls is not an isolated incident.

According to our newest research, closed deals involved webcams being used 41% more often than lost deals. 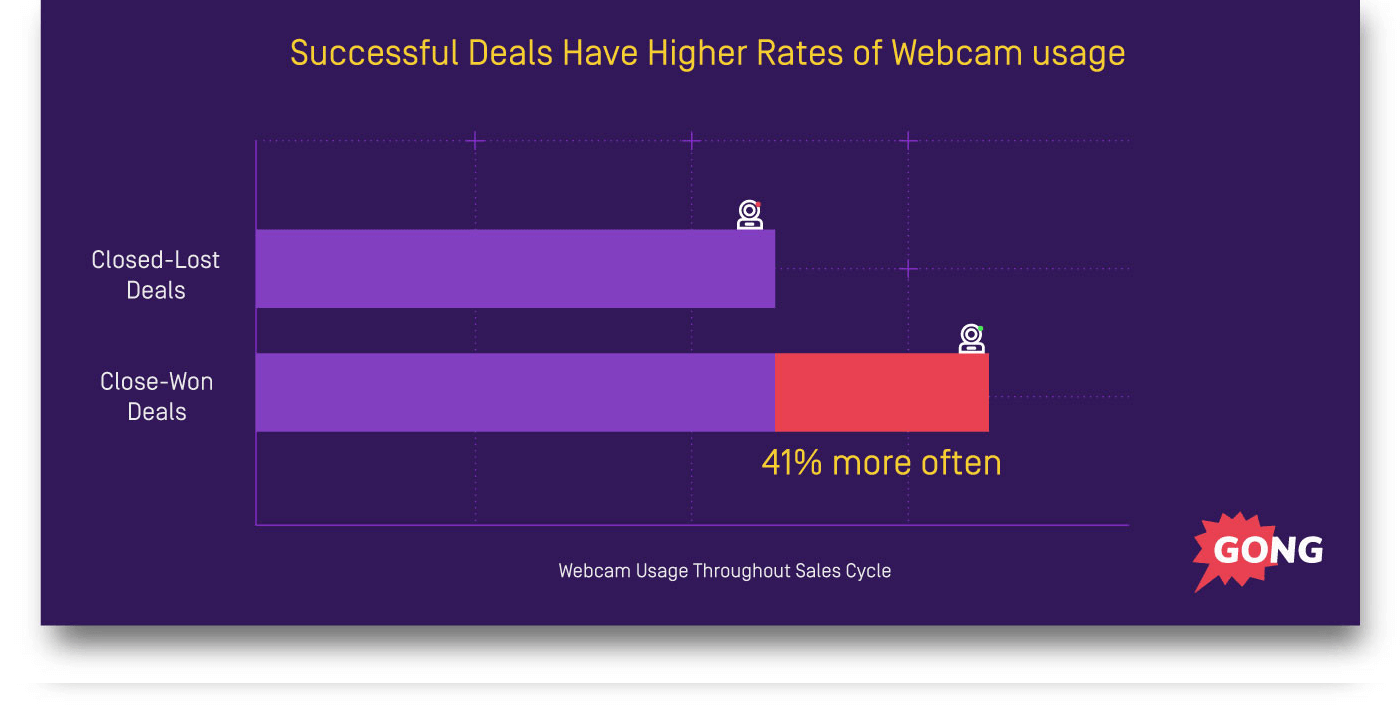 Here are the details:

At Gong.io, we recorded audio and video of 121,828 web-based sales meetings and analyzed them with AI.

The audio of each meeting was recorded, transcribed, and speaker-separated, looking something like this:

We identified the verbal behaviors of top salespeople (which we’ve published extensively).

There was an incredibly strong correlation between having your webcam turned on, and closing deals.

What’s more, we learned that the top sales reps take it a step further.

Not only do they have their webcams on to begin with, but they also spend more time during their meetings having face time via the webcam.

Instead of spending most of the meeting sharing their screen to present a deck or demo a product, top sellers spend much more time virtually “face to face” on the web cam.

This “Mental Illusion” Explains Why Video Is so Powerful

Have you heard of “The McGurk Effect”?

Here’s the short explanation: what you see changes what you hear (and vice versa).

It explains why using webcams dramatically improves web-based sales calls—two senses are more powerful than one.

This video illustrates how one sense (sight) dramatically changes another sense (sound). I beg you to watch it.

Here’s what this means for your sales calls (and the key takeaway of this post):

When you pair the sound of your voice with the sight of your face, your words come alive and create a totally different perception.

They carry more color, life, and pack a harder punch.

The same words, said the same way, without the sight of your face, feel flat and lifeless.

That’s why we created a FREE, 9-point checklist for having have great video calls.

It includes everything you need to know about using your webcam effectively for sales calls.

Early in my career, I did the opposite of what’s on the checklist. I made every mistake in the book.

With this checklist, you don’t have to.