This article is part of the Gong Labs series, where I publish findings from our data research team. We analyze sales conversations and deals using AI, then share the results to help you win more deals. Subscribe here and follow me to read upcoming research.

“It’s about stakeholders. You have to get wide when you sell into organizations with 2,000+ employees.”

I was getting coffee with a friend of mine who’s an Enterprise Account Director at a Fortune 500 company.

I’d asked him what the biggest difference is between $50k and $500k deals.

“Stakeholders are crucial, and so is your team. Selling is a team sport once you’re talking quarter million dollar deals. I don’t just sell — I coach and direct a go-to-market team.”

I finished my overpriced coffee and went home.

This guy has been to more president’s clubs than Alaska Airlines, but I couldn’t help but wonder… is team selling really that important?

And what effect does multi-threading have on deals?

So I had the Gong Labs team run the numbers.

Here’s what you need to know if you want to close six-figure deals:

My friend was right: We know that multi-threading — aka building relationships with multiple buyers in an account — boosts win rates.

But does it relate to deal size?

We analyzed 10,332 sales deals and uncovered a strong correlation between deal value and the number of buyers involved in closed-won deals: 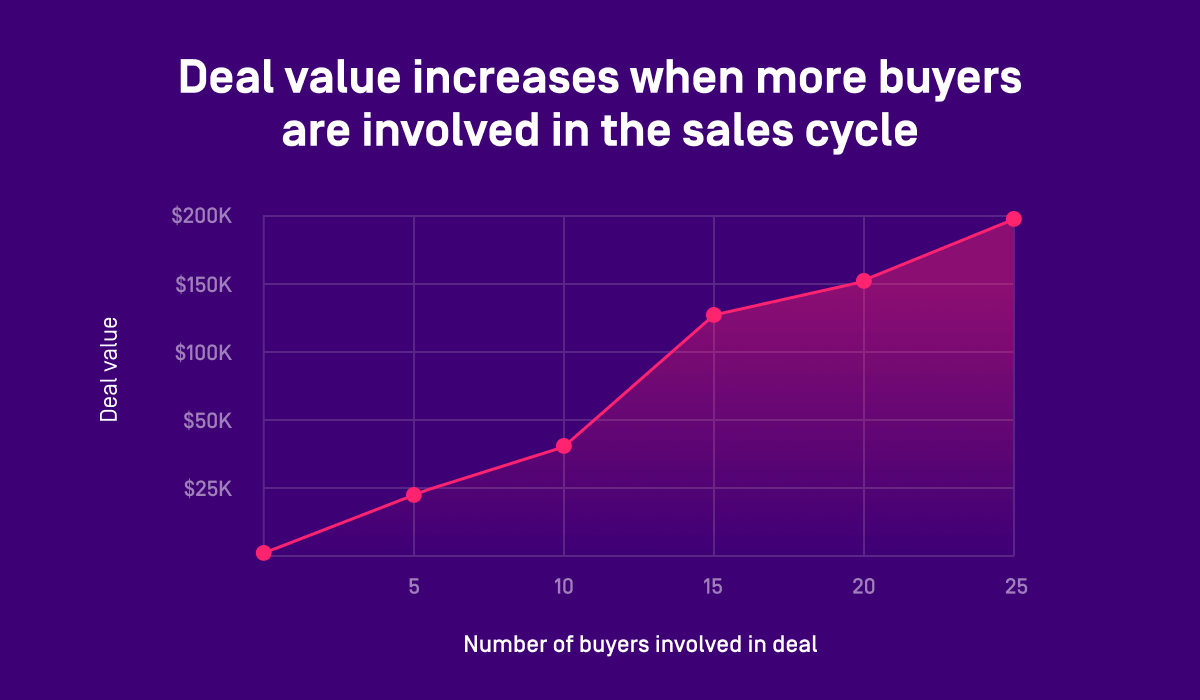 The good news is that all that work pays off (literally) in the form of much larger deals.

The larger the purchase, the more eyeballs (read: scrutiny) the deal requires.

Each of those groups can easily include five or more people.

But here’s the thing: It’s impossible for an AE to build and foster relationships with all these people on their own.

If you sell to ~20 people in each account, and you have ~15 accounts at any given time, that’s 300 contacts you’re expected to manage at once.

Not happening … unless you’re multi-threading.

Visibility into who you’re working with and how engaged they are is critical for closing complex, six-figure deals. (Or any deals, really. But particularly for complex ones.)

Here’s why that visibility matters: 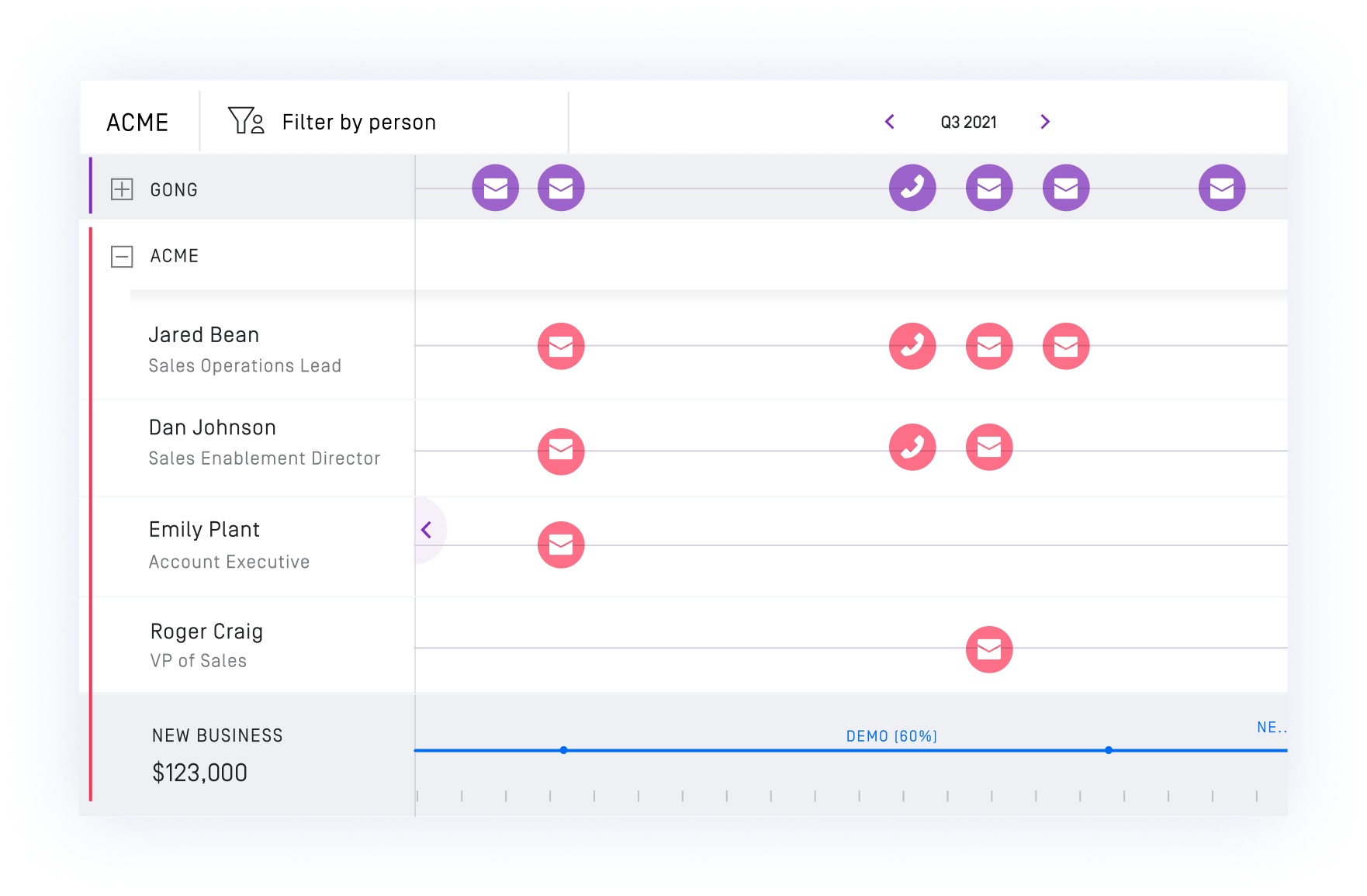 Beyond understanding who your main champions and blockers are, you want to see whether the whole pack in any given deal is coming along with you, or whether their enthusiasm is concentrated in just a few people.

When you know that, you can more easily get others from your organization involved in your deal.

Without this level of visibility, you can only hope you’re wide enough in your deal to forecast accurately.

And hope has no place in your pipeline or forecast.

So it looks like my friend was right about multi-threading… except for one thing.

While that was once seen as true, sales organizations can now mobilize team selling to win more deals across the board.

We analyzed how team selling affects deal success and it has a HUGE impact on win rates, no matter the deal size: 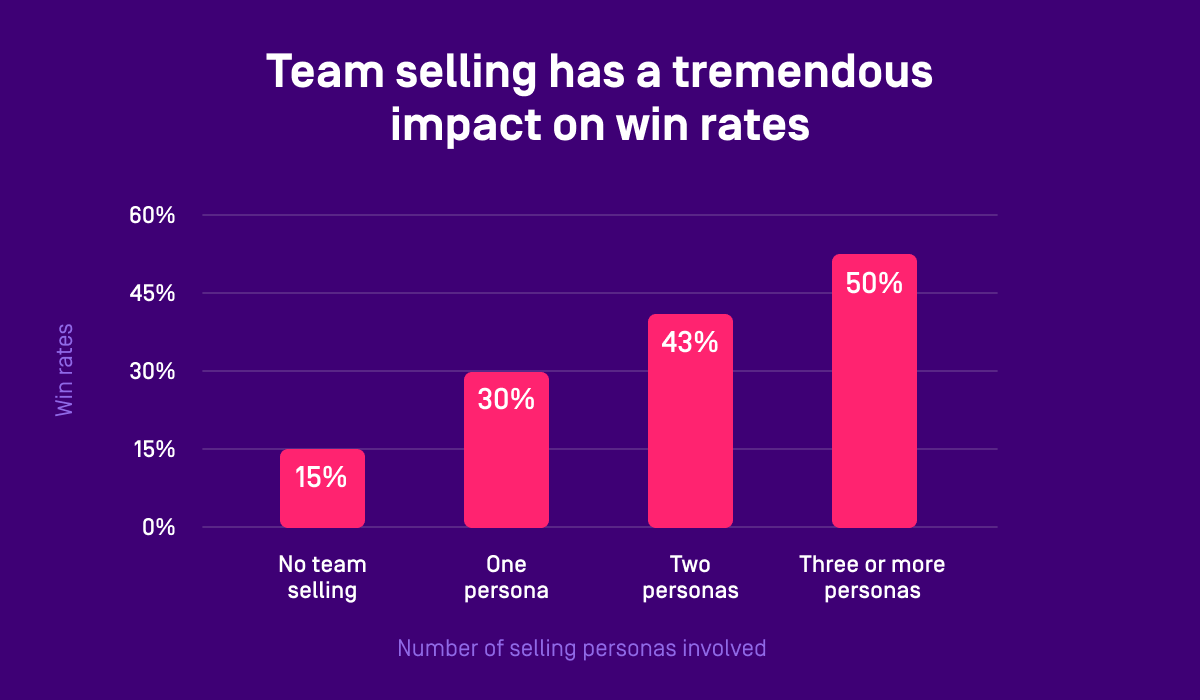 Say your engagement stats point to one group that’s not coming along with the rest of the team in the deal. It’s time to figure out how to bring them back to the table.

The right person to do that might be you, but it might be a sales engineer or someone from customer success. Depends on the scenario.

And how many people should you involve? The numbers really say it all: Win rates DOUBLE if you add just one colleague from the seller’s side to the mix.

Having three or more people from the seller’s side involved gets you more than 3x the win rate.

If you’re selling alone, you’re leaving money on the table.

If you’re selling alone, you’re leaving money on the table.

(PS: Want to turn these insights into revenue? Download the Team Selling Cheat Sheet. It outlines who you should bring into your deals, when, and why — so you can increase your win rates.)

Why team selling is your secret weapon

Team selling works with buyers across all segments. Here’s why:

How to win as a team

Each person on your GTM team has unique skills that can add value to the sales cycle, especially if uncertainty pops up in the buyer’s journey.

In fact, with a bit of research, we found four categories of people who you can pull into any deal:

Use them intentionally, otherwise you’ll add unnecessary roadblocks to your sales cycle and overcomplicate their evaluation process.

Here’s the high-level view of who you should pull into your deals:

Worth noting: CxOs are the least-used of the four personas, but they correlate to the highest win rate. Time to get your senior execs involved.

So long as you know how.

Before you invite them to your next call…

It’s easy to read this post and think that adding people to your next call will help you seal the deal.

If you want to do team selling effectively, you have to know WHEN and WHY to bring each of the four personas into a deal.

Otherwise you’ll confuse your buyers and add unnecessary complexity (and length) to your sales cycle.

But if you get it right, your buyers will see you as the clear vendor of choice.

That’s why I created the Team Selling Cheat Sheet. It shows you exactly when and why you should involve each of the four personas.

It also explains what they should offer during the call (plus pitfalls to watch out for when they’re involved).

Invite the right people in at the right time and your win rates will soar — just in time for EOQ.