You know that tingly feeling you get when your buyer has interest AND budget?

I’ve been there. And I remember one time when everything was lined up and ready to sign.

She was unreachable for days, then weeks. Not a peep. Turns out she left her company without warning.

I needed a backup plan but didn’t have one.

I lost a very winnable deal and it haunts me to this day.

Recently, I realized that we have insurance for our car, health, and home. But we’ve never had deal insurance.

It’s called multi-threading, and it’s a simple solution that gets incredible results.

And now there’s nail-in-the-coffin data to prove it.

Quick Sidebar: How We Got Our Data

If you’re new to Gong Labs, here’s a quick explanation of where our data comes from:

We analyze sales interactions from our product users (anonymized, of course). That includes everything recorded by Gong during their web conference meetings, phone calls, and emails.

Then we analyzed their deal outcomes (closed won/lost, sales cycle length, etc.) to find trends around multi-threading. In fact, we analyzed over 10M sales conversations and 500,000 sales emails to get the results for this post.

What you’re about to read is backed by some serious number crunching.

What Our Data Says About Multi-threading

What is multi-threading? Multi-threading is the concept of building relationships with multiple stakeholders within your deal. It’s an approach that top salespeople use in every deal to build momentum and strengthen their influence when they’re not around.

But there’s never been evidence proving the incredible impact.
Get ready for the proof portion of the show…

On average, winning deals have at least 3 people from the buyer’s side included in meetings across the sales cycle (phone/web conferencing).

By contrast, losing deals often struggle to get more than one point of contact to attend their meetings. The first person they connect with is often the only person they ever speak with. 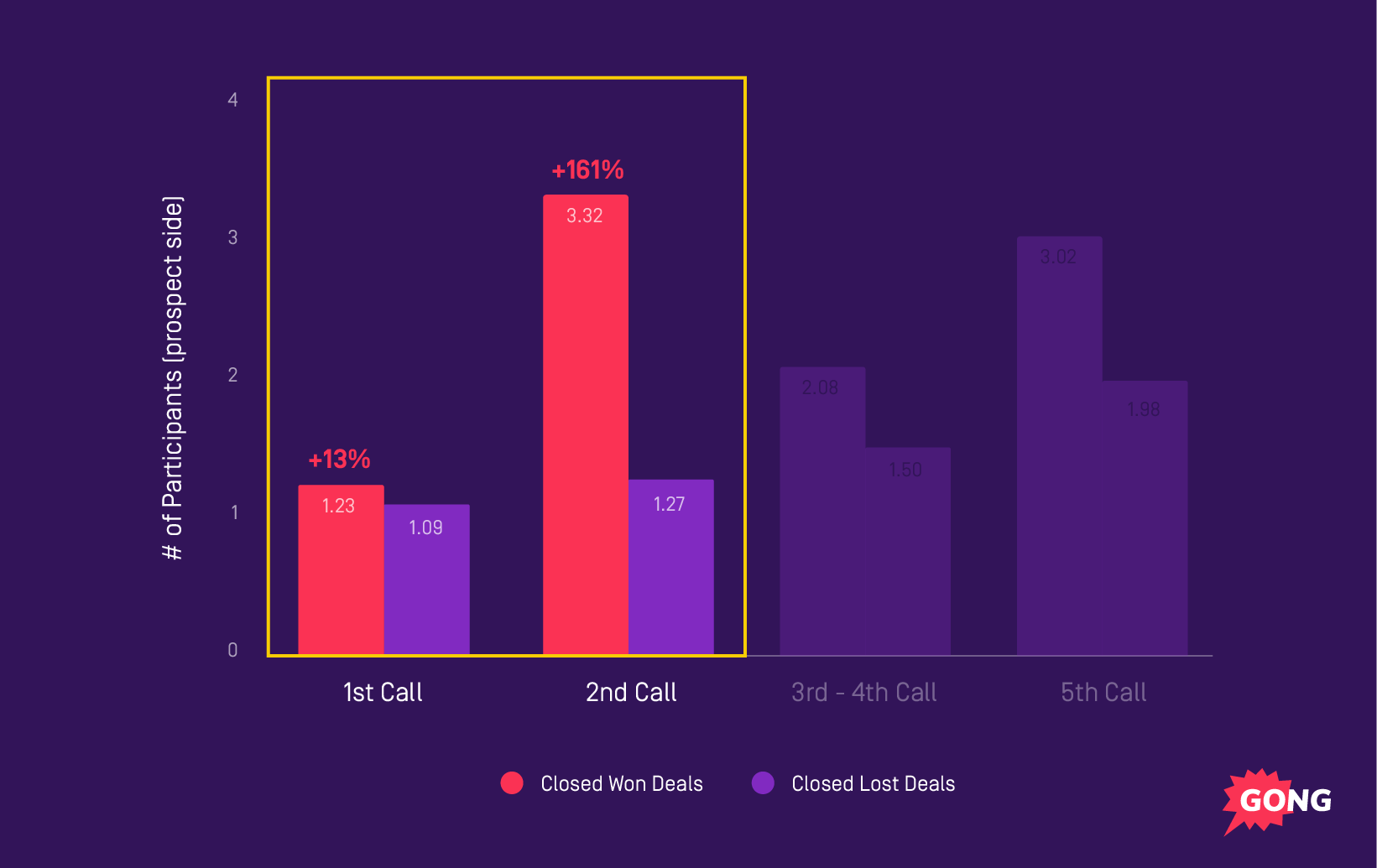 Additionally, you can see that most deals start the same way, with one point of contact.

BUT, the number of participants from the buyer’s side for the second meeting almost triples in winning deals.

That early spike in engagement is a defining characteristic of successful deals.

Losing deals? On average, never make it past one point of contact. It’s like the kiss of death.

These insights confirm the behavior of buyers we’ve all heard – they make decisions in groups.

So, what determines if your deal makes that jump in engagement? There are two factors:

But it doesn’t stop there.

The other HUGE impact? Email engagement.

The success gap really widens when you look at the unique number of prospects involved in a deal via email: 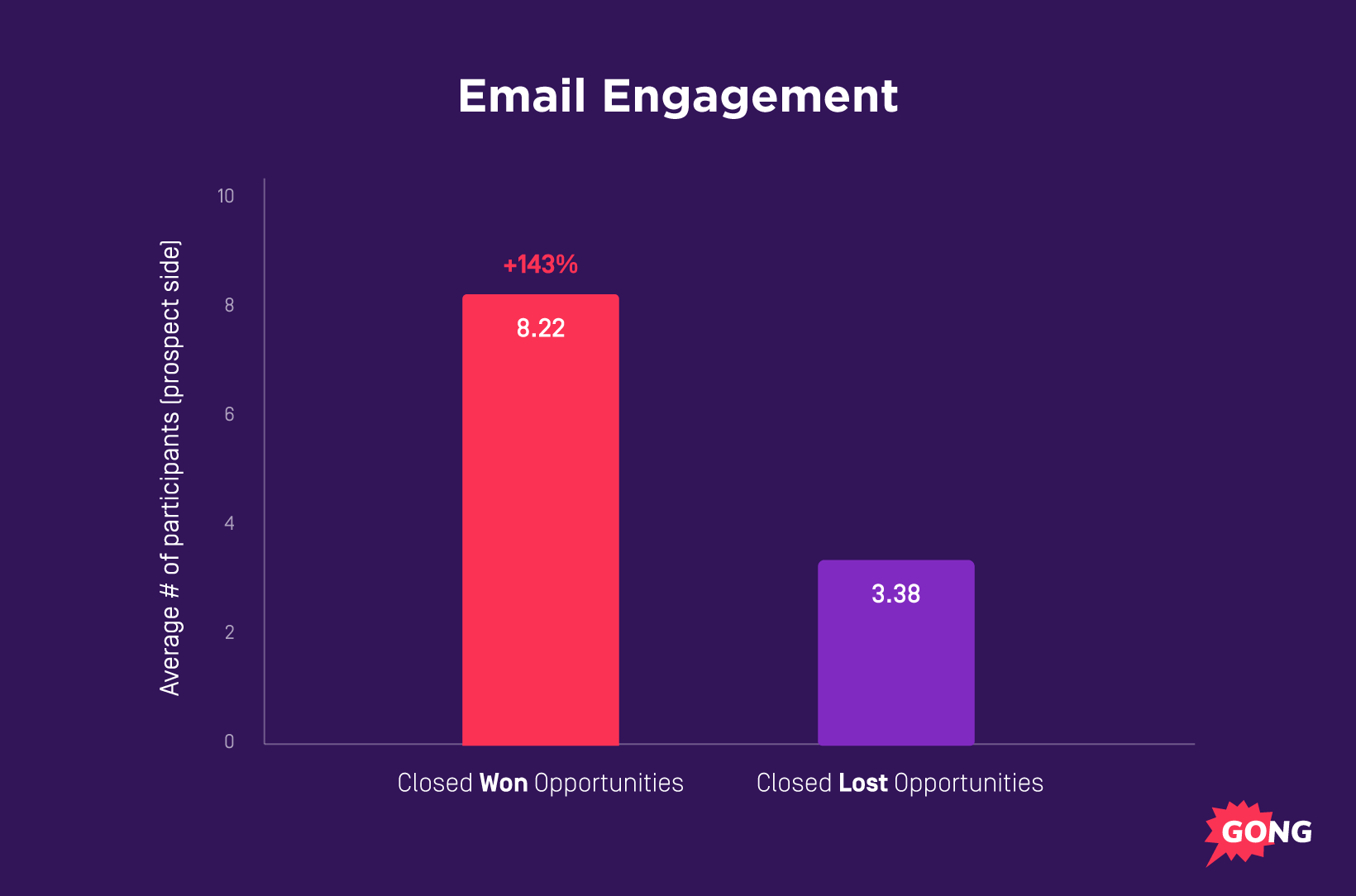 On average, winning deals involve 8 points of contact via email.

Losing deals only make it to 3 points of contact via email.

That’s a 243% difference in engagement.

The message couldn’t be clearer: the more stakeholders you access – in sales meetings and via email – the higher your success rate. This is why multi-threading is a must.

If you’re relying on a single point of contact to win a deal, your pipeline could be in a world of hurt faster than you can fall to your knees yelling noooo!

(PS: Want tactics you can use today when closing a deal? Download our Closing Kit Master Class for free. These tips will help you overcome ANY buying process – just in time for Q4.)

How Multi-threading Helps You WIN

The reason most sellers don’t multi-thread or can’t do it well, is because it’s a very proactive sales motion.

You have to invest in it before you need the return.

That’s why I call it deal insurance.

#1 You Need A Lifeline When Your Champion Goes Dark

When you rely on ONE person to close your deal, you’re only one person away from losing it.

This is single-threading, the unhealthy opposite of multi-threading.

Even if your champion is the decision maker or economic buyer, investing in their direct reports is worthwhile. You may have a verbal yes, and it may feel like the deal is pretty much done.

But that can easily flip from “I got this” to “I’m screwed.” Here’s how:

You were at power, but you didn’t have a groundswell.

In other words, you’re vertical in your account, but not wide.

That leaves you vulnerable and lacking control on a deal that’s seriously at risk, if not completely lost.

Yes, getting to power is crucial, but on its own it’s not guaranteed to get your deal done.

You need additional contacts in case your champion disappears. That’s exactly why multi-threading is deal insurance.

#2 You Need an Army of Influence to Win

Going dark isn’t the only risk that can plague your deal.

Healthy deals can take a quick downward turn when priorities shuffle, budget restraints set in, or bandwidth becomes limited. Each circumstance has the potential to hold up your deal, but multi-threading can tackle them all.

It’s a game changer because instead of fighting these hurdles alone, you have numerous champions battling internally on your behalf, preventing hiccups from becoming showstoppers.

The ability to tackle several threats at once is especially important for companies attempting to go up-market and for sellers chasing larger, more complex deals.

Ultimately, you’re responsible for making sure multi-threading happens. You have to be proactive in getting wide – buyers simply won’t do it for you.

Here are the most common reasons you might end up single-threading:

It’s common to break into an account through a senior leader and get immediately punted to someone on their team to really dig in and see if there’s a fit.

You might have a first meeting with the new contact and assume they’re your new path forward without ever going back to the original contact. As time passes, the senior leader forgets about the intro, their interest in your offering fades to zero, and it’s impossible to get back on their radar.
Turn that around.

Go back to the leader who was your starting point. Give them updates and keep them in the loop. You’ll need them to step back into the process to approve the deal later.

2. You didn’t ask for an additional contact to work with

If you didn’t ask for an additional contact to work with, that means all your work is hanging by a thread. (Yep, the deal is dangling precariously from the hands of your one champion).

The old cliché that “it’s okay to ask for what you need” rings true here… as long as you ask well.

Ask poorly and the best-intentioned multi-threading will quickly be interpreted as going around or over your prospect. That earns you enemies as quickly as it gains you new contacts.

There are non-threatening ways to make the initial request, follow up on it, and bring more people into the conversation.

How to Put This into Play

You may already be seeing the light on multi-threading. It’s such a valuable approach.

But if you’ve started to ask yourself “How do I do this?” – here’s a quick peek at the solution:

You need to track your multi-threading efforts.

Gong has this slick feature called “People Timelines.” It gives you incredible insight into exactly who is involved in your deals… like who’s attended meetings or responded to emails (recipient and CC).

There’s nothing like seeing exactly how (or IF) you’re building an army of champions. Simple visuals make it easy to understand who you’ve connected with and when. 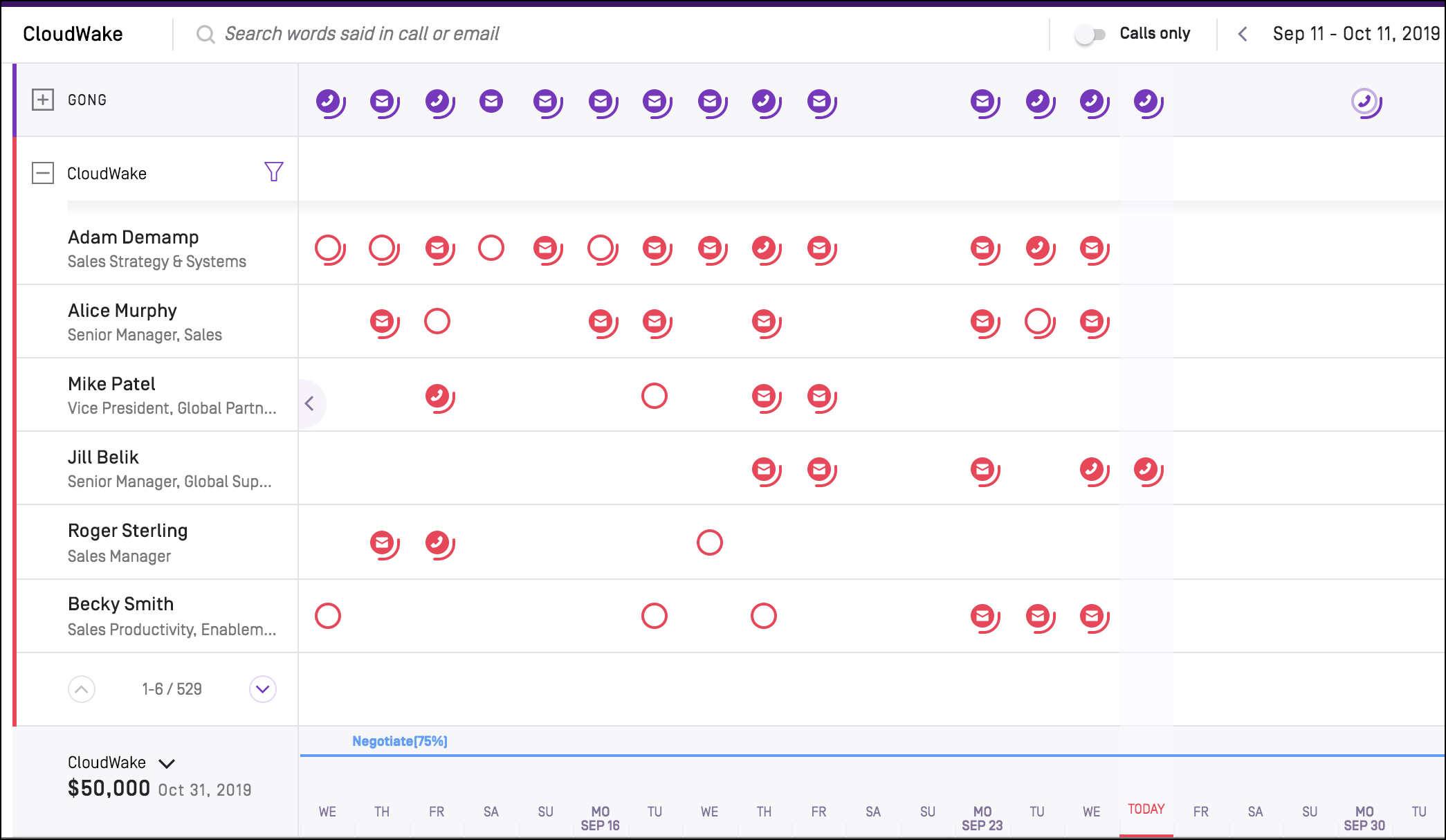 You’ll have an immediate sense of whether you’re wide enough and involving the right people on high-priority deals.

Basically, you can swap out anecdotes for reality, and that puts you into top-tier of sales execution.

Okay… back to the reasons multi-threading is incredible (#3 is my personal favorite).

#3 Confirm That You Have ALL the Facts

I’m going to say something that insults buyers everywhere: they lie to you.
It’s not malicious. Most of the time, it’s completely accidental.

That said, it’s your job to decode reality.

Every deal in your pipeline has a surprise — a hidden truth you have yet to uncover. That’s why you’re never truly in control of your deal until you learn the FULL truth, and that requires numerous information sources.

Basing your closing plan on what one person tells you is risky business because they could be wrong.

And that means you could easily be heading down the wrong deal path.

No one is immune to champions who — despite their best intentions — accidentally coach you inaccurately. You can’t see behind-the-scenes blockers or defend yourself against unknown procurement officers who were pitbulls in a previous life.

If you get any of the following answers while navigating your closing motion, it’s a red flag for a false (or flimsy) truth:

Unknowns are out there, waiting to derail your deal.

And master sellers know to uncover these surprises proactively to maintain security in their deals and eliminate what would otherwise become barriers to closing a deal.

You uncover unknowns by triangulating the truth with your stakeholders.

This means asking the same questions to multiple contacts and seeing whether the answers align.

If all the answers are the same, great! You’re on the right track. Continue vertically until everyone from the end user to the executive sponsor is aligned.

If the answers aren’t the same, great! You found a potential hurdle before it found you. When you uncover an unknown in your deal, you’re a step ahead in terms of finding a solution.

Alternately, if you wait for false truths to find you, they’ll greet you with a smack in the form of increased risks.

You’ll feel the sting of an elongated sales cycle and a lack of control. That will leave you just hoping the deal will come in, and hope is not a strategy.

If you’ve followed steps #1 and #2 in this post and have multiple points of contact, you’ll be in a position to gather information, avoid roadblocks, and nail down a win.

Here’s Your Path to Deal Success

Use these tactics and you’ll catapult yourself to sales greatness.

You’ll impress your leadership team during pipeline reviews and be a shoo-in for President’s Club.

But you still need one thing: sales closing techniques that seal the deal. That’s why we created the Closing Kit Master Class. It includes: