“Part of what it means to have a powerful personality is that you can draw others into your own rhythms and dictate the terms of the interaction.”

In The Tipping Point, Malcom Gladwell introduces us to Salesmen: a special class of people with persuasive capacities so large, they’re capable of spurring word of mouth epidemics.

Gladwell points out that when two people have a conversation, they eventually reach “conversational rhythm.” Their volume, pitch, talking speed, and pauses eventually equalize and fall into close proximity.

But one of the points Gladwell makes about Salesmen is that instead of seeking this mirrored state of rapport with others, they pull people into their own conversational rhythms and patterns.

They “conduct the interaction on their terms,” not the other person’s.

Less persuasive people by contrast actively seek to mirror the other person to find common ground. In a subtle way, they give away their power and status by coming across as approval-seeking.

Here at Gong.io, we found a similar phenomenon among B2B salespeople (albeit, we have very different methods than what’s in Gladwell’s book).

Every call was recorded, transcribed, analyzed with artificial intelligence, and mapped to the CRM to identify the differences of top reps against their average-performing peers.

Buyers “Mirror” Top Salespeople, Not the Other Way Around 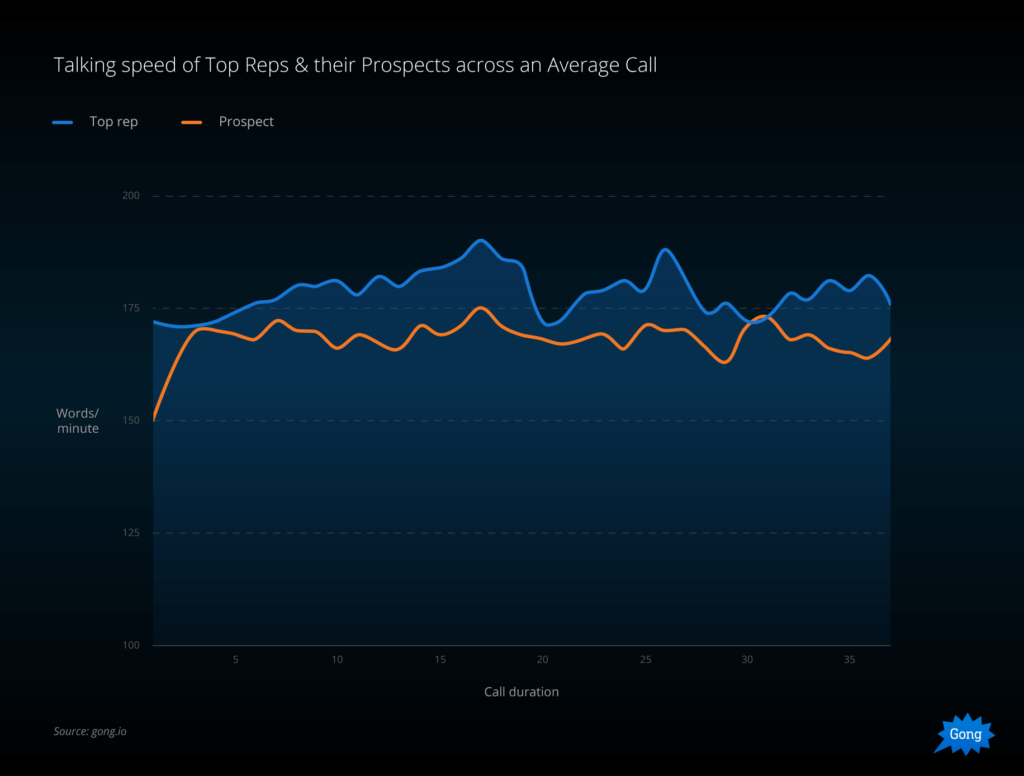 Notice how big of a jump the prospect makes within the first three minutes of the call. The master salesperson “pulls” them to their level, leading the interaction.

“Middle of the road” salespeople, by contrast, adjust their talking speed by 7% in the prospect’s direction, while the prospect barely budges: 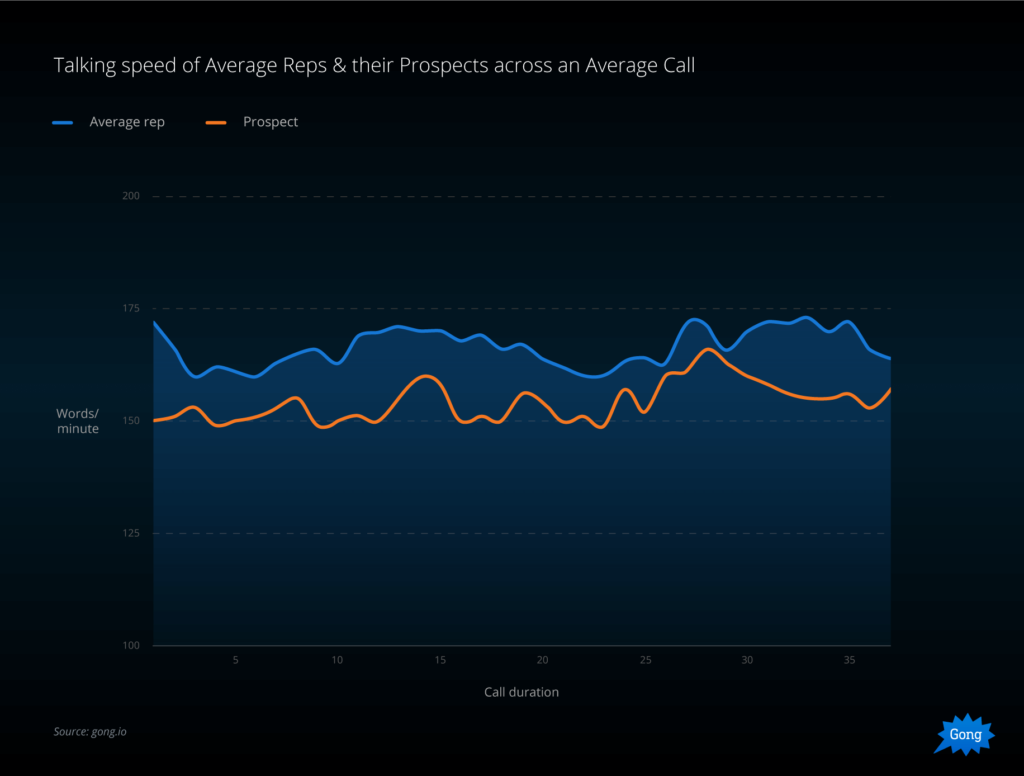 It’s almost as if average salespeople are seeking approval in a subtle way.

But keep in mind: refusing to adjust your speech rate is not going to suddenly make you a top rep. The nuances of correlation and causation are at play here.

Next, We Measured “Sentiment” (and Found the Same Thing)

A similar pattern was found when we looked at the “sentiment patterns” of seller and buyer language.

For the unfamiliar, “sentiment” is a measure of how positive or negative a person’s language is (read more about how we measure sentiment in this article).

When confronted with a prospect that uses a lot of “negative” and “neutral” language, top reps – on average – do not adjust the positivity of their language downward to mirror the prospect.

Instead, the prospect adjusts their language to become more positive in a way that matches the salesperson’s: 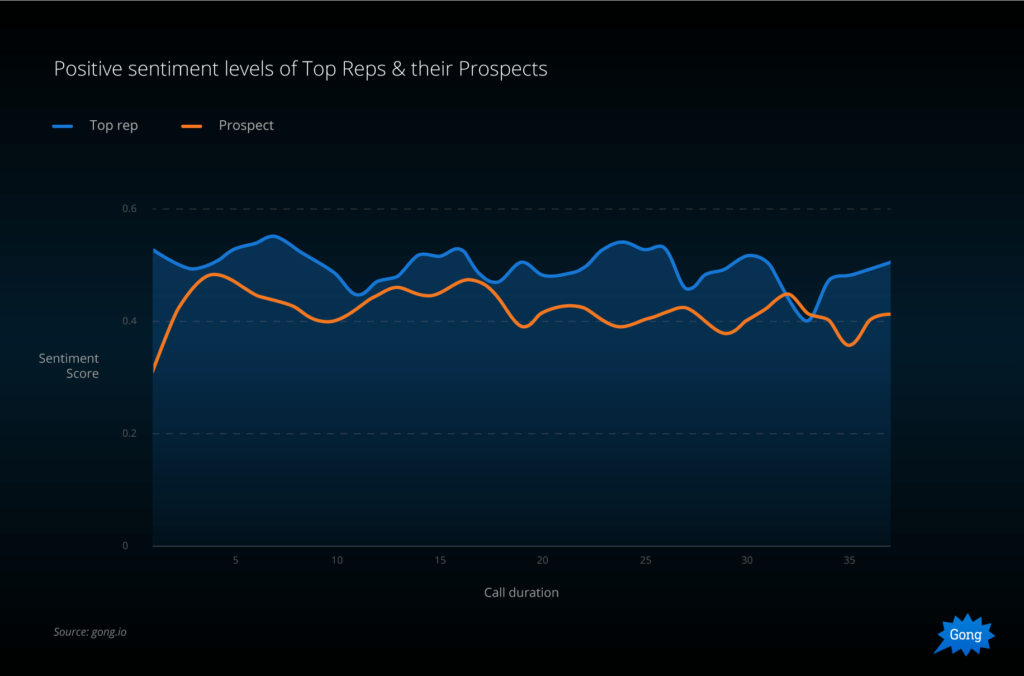 It’s almost the exact same pattern as talking speed. It’s as if the top salesperson is framing the social dynamics in a way that makes them the higher status individual.

Common Ground Is Reached Between 2-3 Minutes

It’s interesting to note that “synchrony” in terms of sentiment happens around the same time window as synchrony of talking speed does: between the 2-3 minute mark.

In all three of the above charts, “proximity” was reached between the 2-3 minute window of the call: 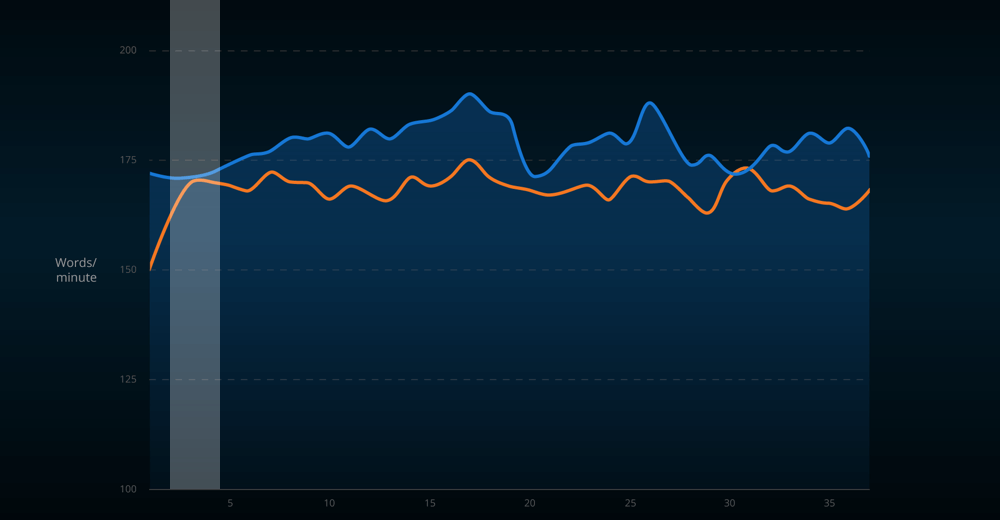 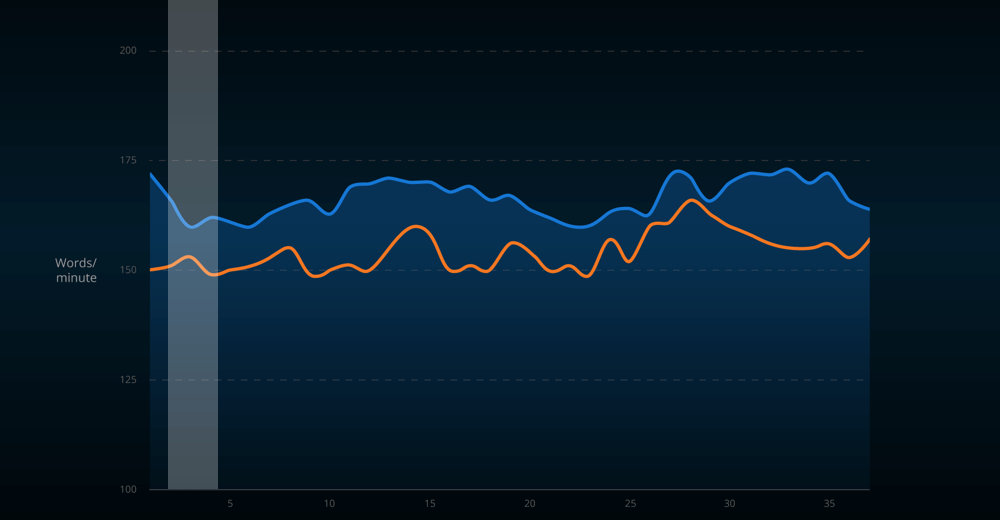 They follow a very similar pattern, indicating that humans naturally attune themselves to each other quickly (I bet this happens even faster in face to face interactions).

Top Salespeople Maintain Their Status In the Interaction

This data helps explain an ironic social phenomenon: people who do not seek others’ approval often end up gaining the most approval from other people.

It’s not that they’re rude “I don’t give a damn what you think of me” type people. It’s just that they don’t feel the need to validate themselves through other people. As a result, they’re natural leaders.

And by contrast, those that actively seek approval “repel” other people to some extent. The behavior backfires, and paints the approval-seeker in a weak, needy light. It becomes very difficult to persuade another person from that platform.

That’s all the data I have for now.

Do you have a different interpretation of the data? Feel free to let me know in the comments below.

P.S. Interested in seeing some of our other research?

Check out out the Discovery Call Benchmark Report.

Check out the guide here, and I’ll talk to you next time.