The next time your sales manager joins one of your sales calls or demos for the sake of “team selling,” be sure to thank him or her.

You may be 258% more likely to close that deal than if you flew solo.

The Gong.io data science team is at it again.

We analyzed 21,392 B2B sales opportunities (along with the sales calls that fell within each opportunity) and found strong confirmation that both selling and buying are best done as “team sports.”

It’s important to note that all of these calls were conducted as conference calls (rather than outbound or inbound phone calls) on platforms like Zoom, GoToMeeting, and Webex.

With speaker-separation technology, we were able to pinpoint the number of speakers that attended each call from both the seller and buying organizations throughout all stages of the sales cycle.

Next, we correlated all of that data with sales outcomes such as close rates, sales cycle duration, etc.

Here’s what we found.

Selling and Buying – Both Are Team Sports

Generalized across all stages of the sales cycle, having at least one call that contains multiple participants from the seller organization correlates with a 258% higher likelihood of closing that deal (compared to if the rep flew solo on every call that spans the deal): 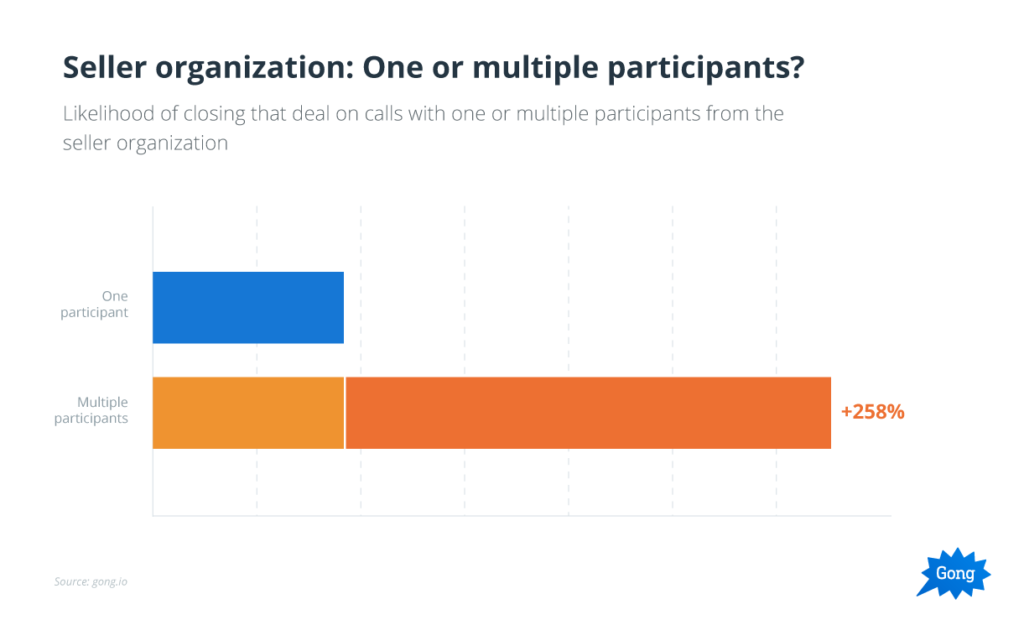 Similar results were found on the buying side of the organization, but at a much lesser scale (which surprised me).

If there is at least one call that contains multiple participants from the buying side of the organization, that correlates with a 32% higher close rate: 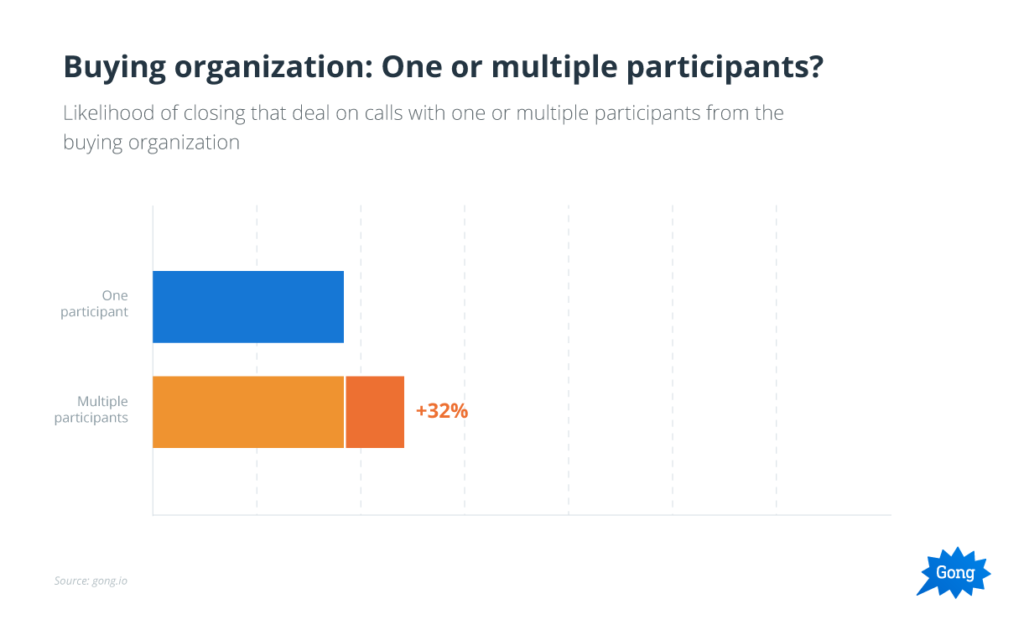 Does the Impact of Team Selling Change Based on the Sales Cycle Stage?

The initial reaction many people will have to the above data is a question of correlation and causation.

Did team selling cause the sale to happen?

Or did multiple participants join the call because the deal was already on a strong path to closing?

While I always encourage our readers to consider correlation and causation, the data also revealed that multiple participants joining a call at any stage (even early in the sales cycle) correlated with a sharp uptick in close rates – which is a strong (though not decisive) indicator that causation may be at play.

The only stage where a positive correlation of multiple participants did not apply was the “discovery call” stage of the sales cycle.

In other words, team selling approaches are best avoided during discovery calls.

That exception aside, multiple participants joining a call at any stage (and from either organization) parallels a stronger likelihood of winning the deal.

Chicken or egg? Probably a bit of both.

Does the Exact Number of Participants Matter for Team Selling?

As long as it’s more than one.

We analyzed what effect one, two, three, and four participants had (both from the seller and buyer organizations), and the differences were all marginal (though, your close rate actually starts to drop off if you have a call with four participants).

The real difference lies in going from one participant to multiple.

How to Implement a Team Selling Approach Despite the Time Limitations

The obvious challenge with the “takeaway” of this article is time.

As much as sales managers (and other sales supporting roles) would love to join every sales call they could, they simply can’t be in 10 places at once.

But… not all deals are created equal.

If you’re a sales manager reading this, the real takeaway is to make sure you join calls for high-priority, big, strategic deals (and to make sure you’re doing that early in the sales cycle, not just late in the game, which is the usual practice).

Recently, we had a monster prospect (that you would recognize) come into our pipeline here at Gong.

Our CEO did not wait until late in the sales cycle to join in on a call with them. He joined in on the first demo. We now have a pending sales order out for that prospect.

And if you enjoyed this article, will you please hit the LinkedIn “share” button below to help spread the word? You may even impress your friends.

If you liked this article you may also be interested in:
Sales indicator – Best success indicator based on analyzing 21,537 sales calls