This article is part of the Gong Labs series, where I publish findings from our data research team. We analyze sales conversations and outcomes using AI, then share the results to help you win more deals. Follow me to read upcoming research.

A CRM forecast is no crystal ball, but it’s the closest thing you’ve got.

(That and your gut, but it’s hard to tell if that’s ‘swing deal optimism’ you’re feeling or the chile verde you had for lunch.)

To get that beloved forecast, everyone punches in the standard info:

Reps type in their deal amount, their forecast confidence (Best Case, Most Likely, or Commit), and the expected close date.

Leaders roll up those numbers—deal size and likelihood of closing—to create the team’s future truth.

Now everyone is accountable for making it happen.

And if your sales forecast was nearly as accurate as your local news station’s weather person, you’d be ecstatic.

Because then every end of quarter would boost your confidence instead of your resilience.

But you wouldn’t have clicked on this article if that were the case.

You’re missing part of the story

There’s a gap somewhere between what your sellers hear on the phone and what you see in your dashboard (or your sales report excel doc).

That’s because what truly happens in buyer conversations rarely (if ever) makes it into your CRM, let alone your final forecast. That close date may not be telling you the full truth.

So instead of focusing on the close date itself, we analyzed 13,439 B2B sales opportunities to see how changing the CRM close date affects your win rates.

And we uncovered something startling.

As deals progress, it’s natural that the projected sign date bounces around.

Meetings are pushed, requirements change, and new points of contact are introduced into the deal.

But how far and how often that bounce occurs tells a story.

We uncovered a strong correlation between the average number of days close dates are extended and your likelihood of winning that deal: 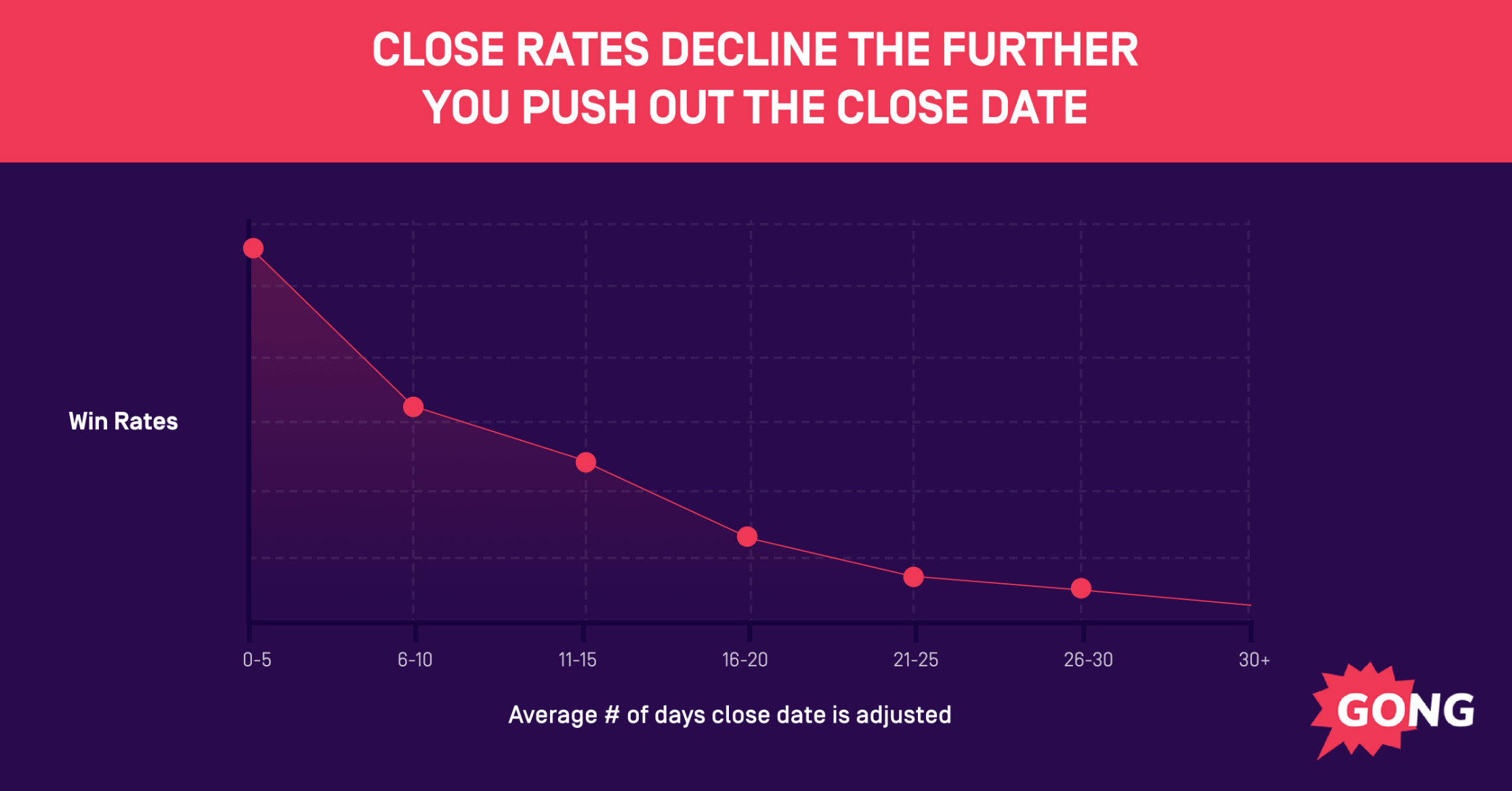 There are few factors to keep in mind here:

So I’m not saying that fudging your close date will boost your win rates (though that would be sweet).

Rather, the data suggests that the size of the close date change is correlated to your level of deal control.

Here’s how to spot loss of deal control

If your buyer takes a surprise vacation, that might push your timeline out by a week. All good.

Maybe an unexpected slow down in procurement adds two weeks to your sales cycle. Not a huge deal.

But if your champion leaves the company—or if there’s any other serious pause that derails your deal by 3+ weeks—you’re in trouble.

When sellers push the close date three weeks or more, that’s not a hiccup, it’s a hold up.

And win rates decline even more when the close dates are pushed into the following month or quarter.

Because the reality is that when deals are pushed out, it creates dead space in a sales cycle.

As a result, you lose mindshare. You drop in priority, be it in your prospect’s attention or their budget.

And once you’ve dropped to the bottom of the priority list, it’s exponentially more difficult to climb back up.

Buyers inevitably ask themselves whether your product is really that important.

If they answer no… well, that’s how cold deals turn into lost deals.

To be clear though, changing a close date isn’t a bad thing in and of itself.

It can be part of a perfectly healthy deal process. You may be surprised to learn that closed-won deals fluctuate 31% more than closed-lost deals: 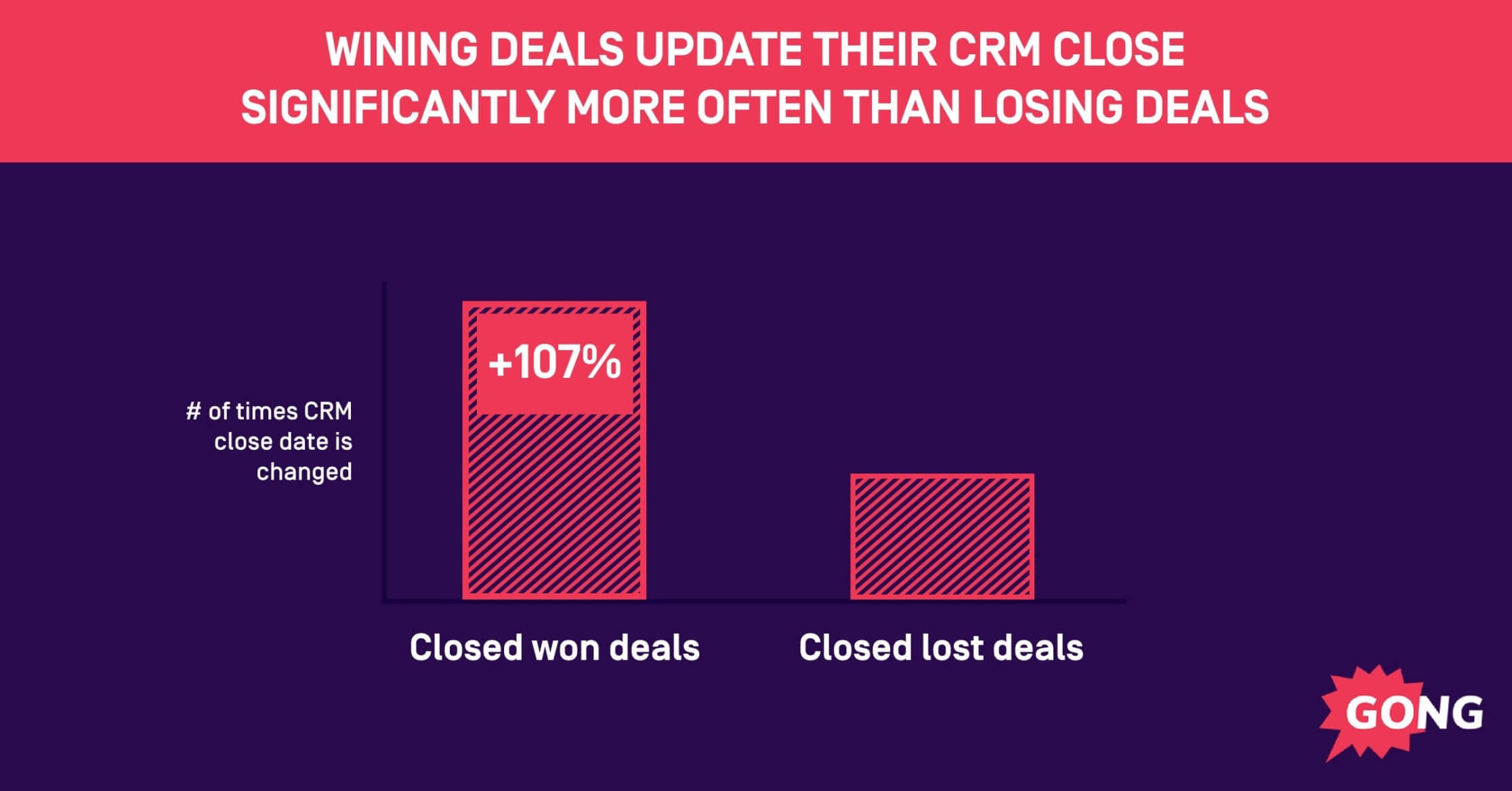 That’s why there’s nothing to update.

What this means for your forecast

All that glitters ain’t gold.

Not every forecasted deal is as strong as it appears based on the close date alone.

Say you have two $50k deals in Most Likely.

If you think they have an equal chance of closing, you’d weigh them both at 85% likelihood.

But what if one of those deals has previously moved its close date by six weeks?

What seemed like a sure thing can turn out to be fool’s gold.

Having this insight is critical to confirming that you really know what’s happening in your pipeline and that you have an accurate forecast on your hands.

The good news: If you don’t have pipeline clarity, you can get it.

Revenue Intelligence surfaces insights and deal warnings that can make or break a quarter before it’s too late. You’ll be able to see whether your close dates are moving, and by how much.

Read this before your Monday forecast meeting

There’s a good chance your quarter wraps up in the next few days.

Want to know if your forecast is really on track?

We created the 7-Point Checklist for Airtight Pipeline Reviews based on everything we know about forecast indicators.

You’ll learn about pipeline pitfalls (and how to avoid them) and get data-backed signals that can increase your deal health—everything you need to eliminate uncertainty from your forecast. 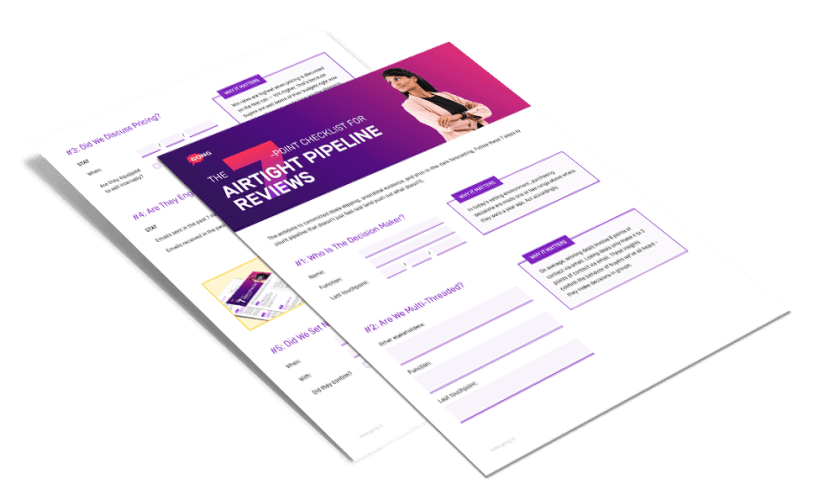