Even though the B2B sales world is dominated by men, salesmen selling to men buyers kills more deals than any other buyer/seller gender combination.

Just as interesting: saleswomen selling to woman buyers brings more deals across the finish line than the other gender combos.

Four months ago I wrote an article titled Women Break the Rules of Selling, Yet Still Outperform Men.

The post was based on analyzing a huge pool of sales calls with AI and sales conversation intelligence technology to understand how men and women sell differently.

The one missing link of the post was that it only analyzed the seller’s gender and didn’t consider the gender of the buyer.

So naturally, this was the most common question I saw in the comments:

“How do sales conversion rates change when you take the buyer’s gender into consideration?”

Tongue-tied, I took the question to our data science team to figure out.

We used machine learning to analyze the voice signatures and names of each sales call’s meeting participants to predict their gender with 97% accuracy.

In other words, if the GoToMeeting participant’s name is “Sarah” and has a “feminine” voice signature, she’s probably a woman.

Next, we mapped the data to each sales call’s opportunity record in the CRM to analyze the outcome of each sale. 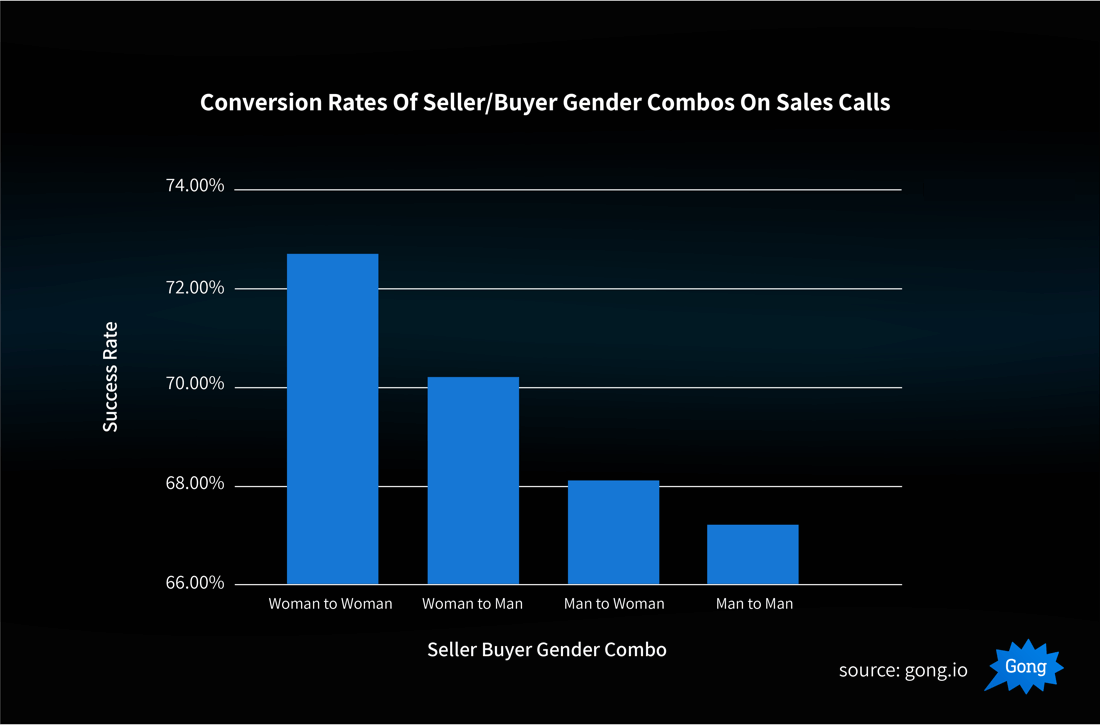 The Y-axis in this chart measures conversion rates between deal stages in the CRM. Final close rates followed a similar story.

Like I mentioned at the beginning: man-to-man selling has sharply lower conversion rates than woman-to-woman selling.

And yet many young women believe selling is a man’s game. I wonder if this can change their mind.
While it may be controversial, I have two takeaways for you:
When you have a woman decision maker in a key deal, your best bet is getting your top saleswoman on the case.
For us men: time to up our game 🙂

Next, we’ll analyze what’s actually happening on these calls with all four gender combinations. Stay tuned by subscribing to our blog. You’ll be notified as soon as the next post is out.