What’s worse than hearing “I’m not interested,” “Your price is too high,” or “I don’t have budget”?

“I need to think about it.”

This phrase can come down on you like a ton of bricks.

The deal had legs.

The finish line was in sight.

You were ready to hit “closed won.”

To find out how this phrase truly impacts deal success, our Gong Labs team turned to the data.

And the results are staggering.

Sidebar: What is Gong Labs?

Before we dive into a whole lotta’ number crunching, here’s a quick explanation of how we get our data at Gong Labs.

We analyze sales interactions from our product users (anonymized of course). That includes everything captured by Gong’s software during web conference meetings, phone calls, and emails. Then we analyze how seller and buyer actions impact deal success.

For this report, we analyzed 140,566 sales opportunities, including the sales calls and meetings that occurred within those opportunities. We specifically looked for the phrase “I need to think about it” and a dozen close variants.  Then we looked at how these phrases’ occurrence impacted deal outcomes and sales cycle duration.

The truth behind “I need to think about it”

What I’m about to say won’t feel right, but it’s true.

When buyers tell you they “need to think about it,” it does NOT negatively impact win rates. 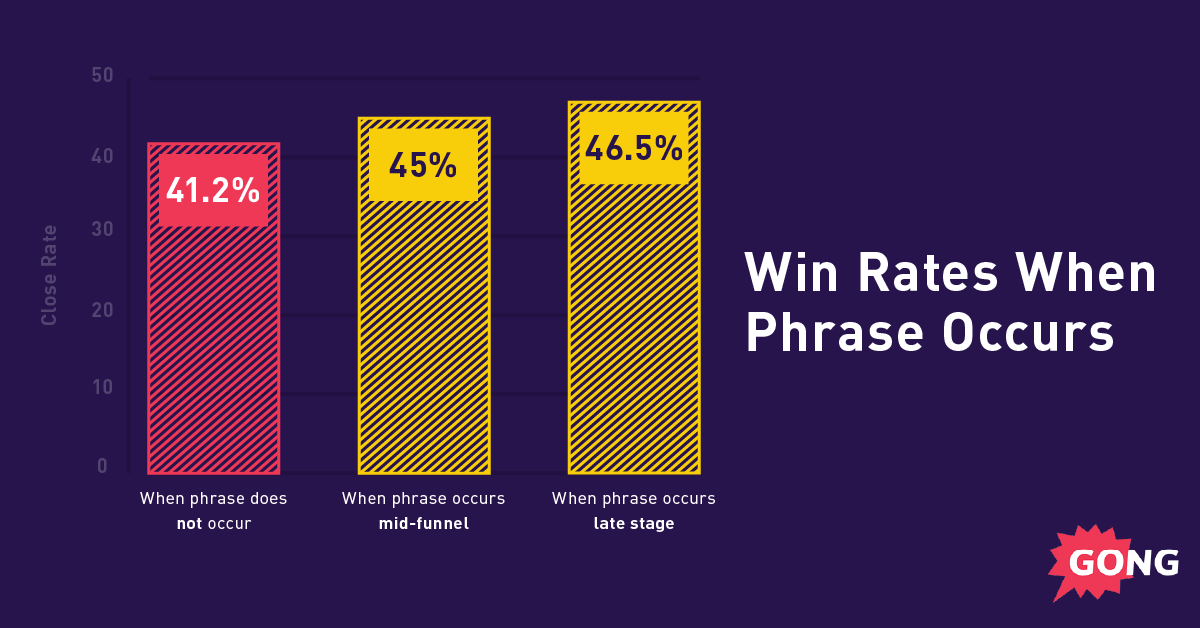 My hunch was that this phrase was a polite way of saying “I’m not interested.”

I mean, that sure is what it sounds like on the receiving end.

But the data says otherwise.

The truth is, deals that encounter that phrase have a slight uptick in win rates (it looks like they really are thinking about it…).

The bigger point is that the phrase isn’t as negative as you’d think. So don’t abandon a deal when you hear it.

Instead, know that there’s one BIG issue you need to pay attention to when you hear that phrase if you want to keep the deal in your forecast.

We all want our deals to hit the fast lane and close ASAP, but this phrase is the proverbial speed bump.

Steady yourself for some unfortunate news about our trigger phrase, “I need to think about it”.

Its use extends sales cycles by 173%: 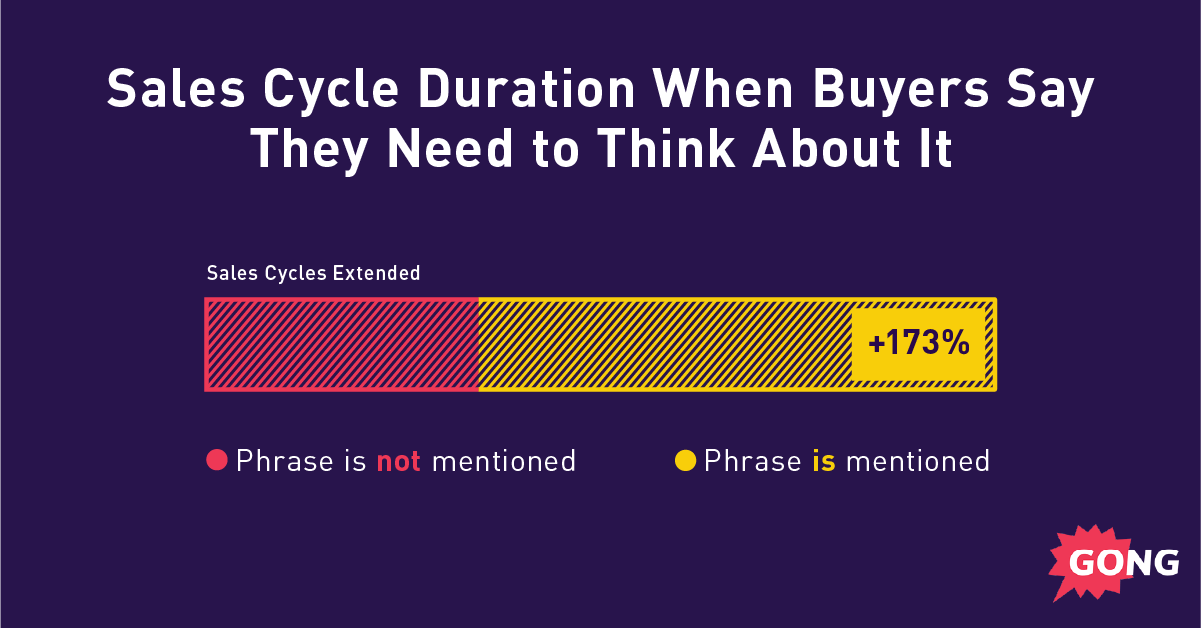 That’s easily the difference between your deal coming in this month or next month (or next year).

Part of that extension comes from the (added) distance between the phrase being said and when the next scheduled sales meeting occurs – which is 55% longer when the phrase is mentioned.

In common terms, you’re now chasing, which is impossible to forecast. You want to eliminate the chase and maintain control by securing next steps with a confident, actionable response.

How do you do that? Look at WHEN the phrase was said because that determines how you respond to it.

Read on if you want to learn how to overcome this objection and avoid a mind-numbing delay in signing.

(PS: Don’t leave your deal to chance. Use our CFO Letter Template to align your offering in “why you, why now” language that resonates with budget holders, so they green-light your deal. Download it here for free.)

How to respond like a pro (and protect your pipeline)

The phrase occurs in two scenarios: mid-funnel or late-stage. 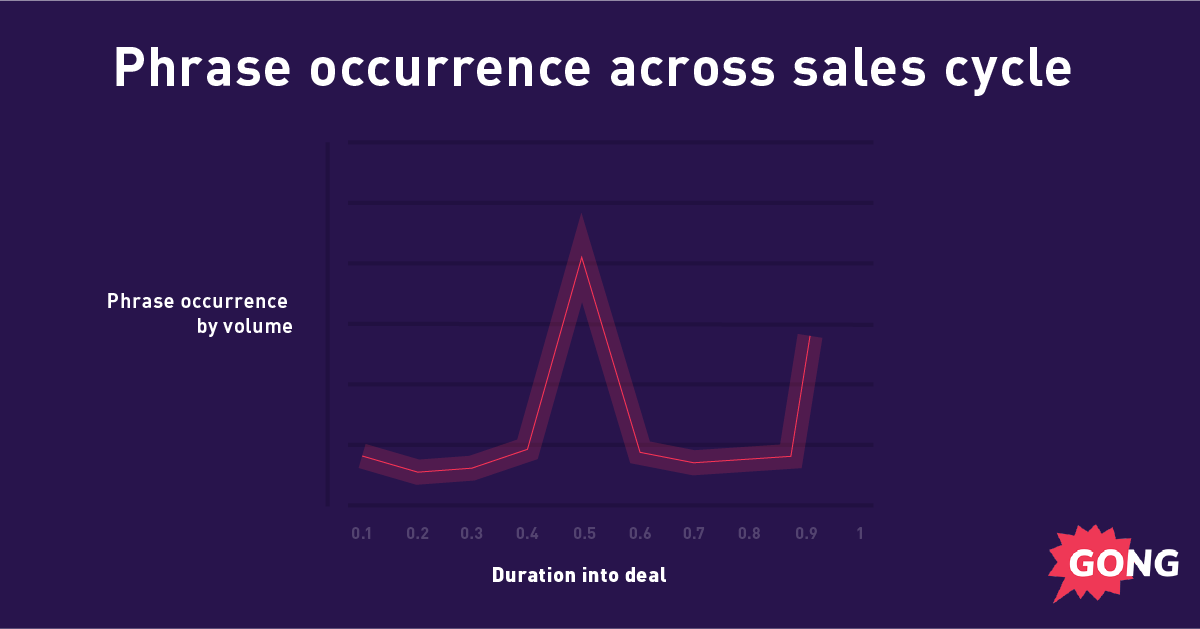 Recognizing when the phrase is used is extremely important because it determines how you respond. You’ll either focus on deal progression or the close.

How to respond when it’s said mid-funnel

According to Sandler Training, buyers use this phrase because they have an unspoken objection.

In other words, your buyer is uncertain about what’s next. They either don’t know what comes next in the process and use the phrase to escape the pressure of the unknown, or they don’t want to continue the process.

The tricky part is that they won’t openly share which it is. It’s your job to figure it out and transform their unspoken objection into next steps.

If you hear the phrase early in your sales cycle, respond with:

“When most people tell me they need to think about it, it’s typically because they’re not interested or I missed something in our meeting.”

If you missed something, they’ll respond with “No, we’re interested, it’s just that…”

That ‘dot dot dot’ is where they start to reveal their uncertainty. Maybe they want to better understand your integration abilities, or maybe they just want to confirm the onboarding support they’ll receive. Who knows. It’s a win either way because now you’ve uncovered the true hurdle in your deal and confirmed that they’re interested.

Once you have this information, pin down the date and time for your next meeting, and use their uncertainty as the agenda.

“Thanks for sharing, James, glad you brought it up. Let’s spend a few minutes covering [insert now-spoken objection]. How’s Thursday at 2pm looking on your end?”

This is how you avoid that massive stretch in your sales cycle and keep deal momentum moving forward. By locking in the agenda and confirming time for your next meeting, you’ve maintained control instead of letting them off the hook, which and inevitably leads to chasing.

On the other hand, if they say “No, you didn’t miss anything,” they’re simply not interested. And it is infinitely better to uncover that truth now versus later (or never) so you don’t waste time chasing a deal that’s never going to close.

How to respond when it’s said late stage

Alternatively, if you’re ready to close and your buyer asks to think it over, it means something completely different.

Due to the impact of the current pandemic, decision making is more restricted and often involves people at one-level higher than normal. Most purchases in today’s new economy land on the CFO’s desk. (More on this in my previous post).

So when your buyer says, “We need to think about it, let me get back to you next week”, they probably mean they have to figure out how to sell it internally.

This is okay, common, and should be expected. And it’s a cue for your next course of action.

Don’t react with shock or confusion. And definitely don’t let them leave the call to figure it out on their own (unless you want to up your cardio by chasing them for the next few weeks).

Instead, get ahead of the objection and take control of the process with something like this:

“Sure, most of the people I’m talking to right now have shifted their buying process as budgets tighten up. I imagine that might be true for you too. Can I make a suggestion that will help you make the case internally?”

Now is when you map out the buying process — whose approval is needed, what that process looks like, and what hurdles to expect.

You’re helping them answer these questions clearly and in a way that will resonate with budget holders.

In other words, you’re prepping your champion to get a yes from the person who matters most.

BONUS ROUND: Here’s one last quick tip that’s worth your time.

If you want to avoid the situations above altogether, use an upfront contract as created by Sandler Training. It’s an agreement between the buyer and seller at the beginning of a call that sounds like this:

“Today we’ll see whether our product is a strong fit, so that you know your time in this process is well spent. If we agree that it’s useful after our demo, we’ll loop in your team to continue building a use case. Is that fair?”

Your buyer’s agreement lets you hold them accountable later on if they try to squirm out of next steps with “I need to think about it.”

Help your buyer think it through with this template

In today’s market there are a million things your buyer might “want to think about”.

Don’t let budget be one of them.

Our CFO Letter Template is a step-by-step guide to help you remove buyer uncertainty and position your solution as the win they need right now.

(It’s already been downloaded and used by 1,446 salespeople to secure budgets and signatures).

Join the inner circle and download your CFO Letter Template for free:

Or grab every single sales template. Ever.