Should account executives combine discovery calls and demos in the same call, or separate them into two calls?

Which of those approaches leads to advancing and closing deals at a higher rate?

While we haven’t answered that question with data, it did make me wonder about a related question we could answer with data:

How long should an account executive’s first call with a new opportunity be?

Do shorter, 20-ish minute calls have a higher rate of advancing (and eventually closing), or is it better to have longer calls, upward of 60 minutes? What “intro call” length increases the likelihood of getting a “second date” (and eventually a CL-Won deal)?

To answer this question, the data science team and I at Gong analyzed a targeted pool of 30,000 account executive “first calls” within our conversation intelligence platform.

Here’s a look at the distribution of calls in terms of their duration:

Notice there are peaks around the 30 and 60-minute marks, illustrating that calls tend to be scheduled for either 30 or 60-minute time slots on the calendar.

So among this pool of calls with various lengths, which duration is optimal for securing the next step and eventually closing the deal?

Answer: None of them and all of them.

There was no statistically significant correlation between the duration of the first call of an opportunity and the likelihood of getting a second meeting.

However, just because there’s no correlation between call length, and securing the next step doesn’t mean the length of our calls doesn’t affect our sales.

Getting the next step when a prospect shows up to the first meeting is one thing.

Getting them to actually show up to the first meeting is another challenge entirely: 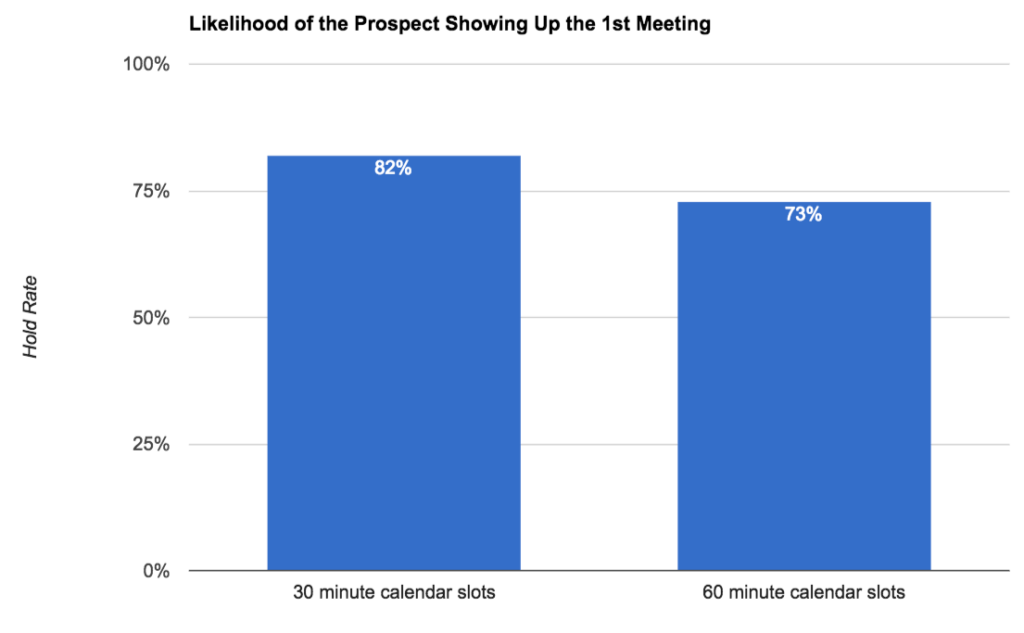 You’re 12% more likely to get a prospect to show up to your first meeting if you send a 30-minute calendar slot rather than a 60-minute one.

It’s also harder for an SDR to “sell” a 60-minute meeting compared to a 30-minute one. We have no way of knowing how many first meetings are left on the table due to that.

Some may argue that 60 minutes is required for complex sales. You could also argue it gets the conversation out of a scripted sales call and into more of a deep exchange.

But when I worked for InsideSales.com, the top enterprise account executive (selling to 10,000 employee companies) kept his first calls down to a lean 22 minutes. On purpose.

We have to choose between depth and volume. Would you prefer fewer 60-minute calls or a greater quantity of 30-minute calls?