This article is part of the Gong Labs series, where we publish findings from our data research team. We analyze sales conversations and deals using the Gong Reality Platform’s proprietary AI, then share the results to help you win more deals. Subscribe here to read upcoming research.

All incredible sales people. Some of which had some serious, ah, issues (looking at you, Belfort)… but all of them could sure sell.And no “best-of-the-best salesperson” list is complete without The Office’s Michael G. Scott.

But the true #1? Andy Bernard. Why? Well, he went to Cornell. Have you ever heard of it?

What can we learn from Andy “I went to Cornell” Bernard?

Did we mention where Andy went to college? CORNELL.

Turns out mentioning your school is a winning strategy when it comes to the essential sales tactic of building rapport.

According to our data pulled from 800k deals, talking about your alma mater increases win rates by 8%, on average. 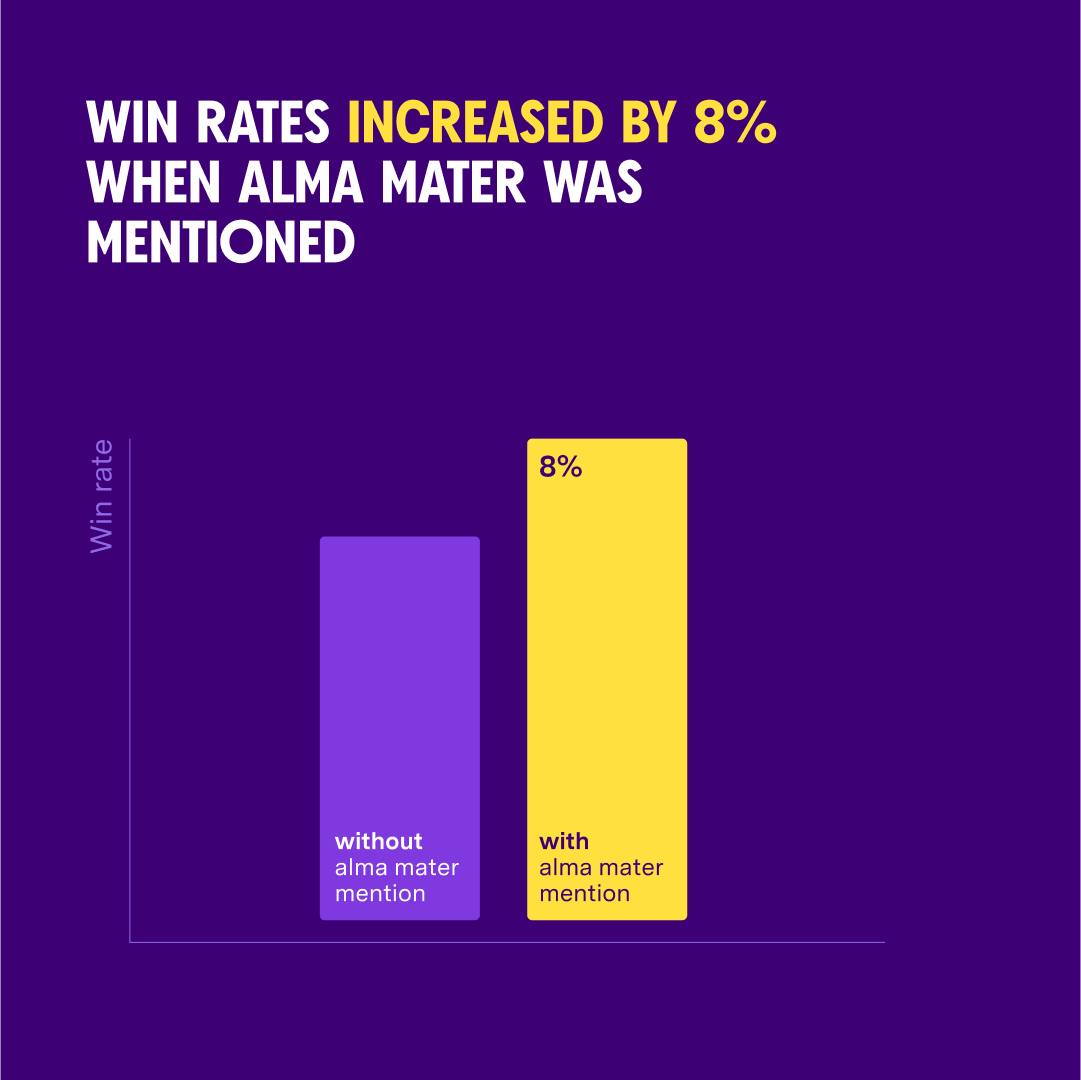 Why talking about your alma mater… matters

It’s a transformative time in most young adults’ lives where we gain independence, build strong relationships with new friends, and is a pivotal time to explore, discover, and pursue our passions.

I completed my undergraduate studies at the (very) small state university of Geneseo in Western New York, and unlike Andy’s alma mater Cornell, you actually may have never heard of it. But when I find myself talking with someone who has, I immediately lean in and become more engaged in the conversation.

Me: Where did you live senior year?

Me: NO KIDDING!? What was your favorite pizza spot?

Stranger: Mama Mia’s of course!
Me: Oh man, a slice of heaven!

Stranger: I was on the rugby team, did you know Tim?

Me: Tim! Yes! Great guy! Terrible at rugby though.

This deep connection goes well beyond reliving the past and sharing stories of late nights at my favorite off-campus watering hole…or library! (hi, Mom)

Maybe a buyer just took their child on a college tour at your old school or maybe they’re dialing in from a city near your old stomping grounds. As we analyzed the data, this topic organically worked its way into small talk in a countless number of ways.

This common bond with one’s alma mater is less about your university and more about finding that topic that builds familiarity and trust, creating (and often strengthening) a common connection.

In today’s digital sales environment, this trust and connection between buyer and seller is everything. In fact, it’s scientifically proven to work.

That’s because it plays into two of the seven principles outlined in Robert Cialdini’s book, Influence: Science and Practice: Liking and Unity.

When talking about your alma mater works

One could argue it’s always important to build rapport.

However, building trust and finding common ground (aka, “liking and unity”) are more important in large and complex deals.

While possibly helpful, the impact is not as great when talking about a short or highly transactional sale. 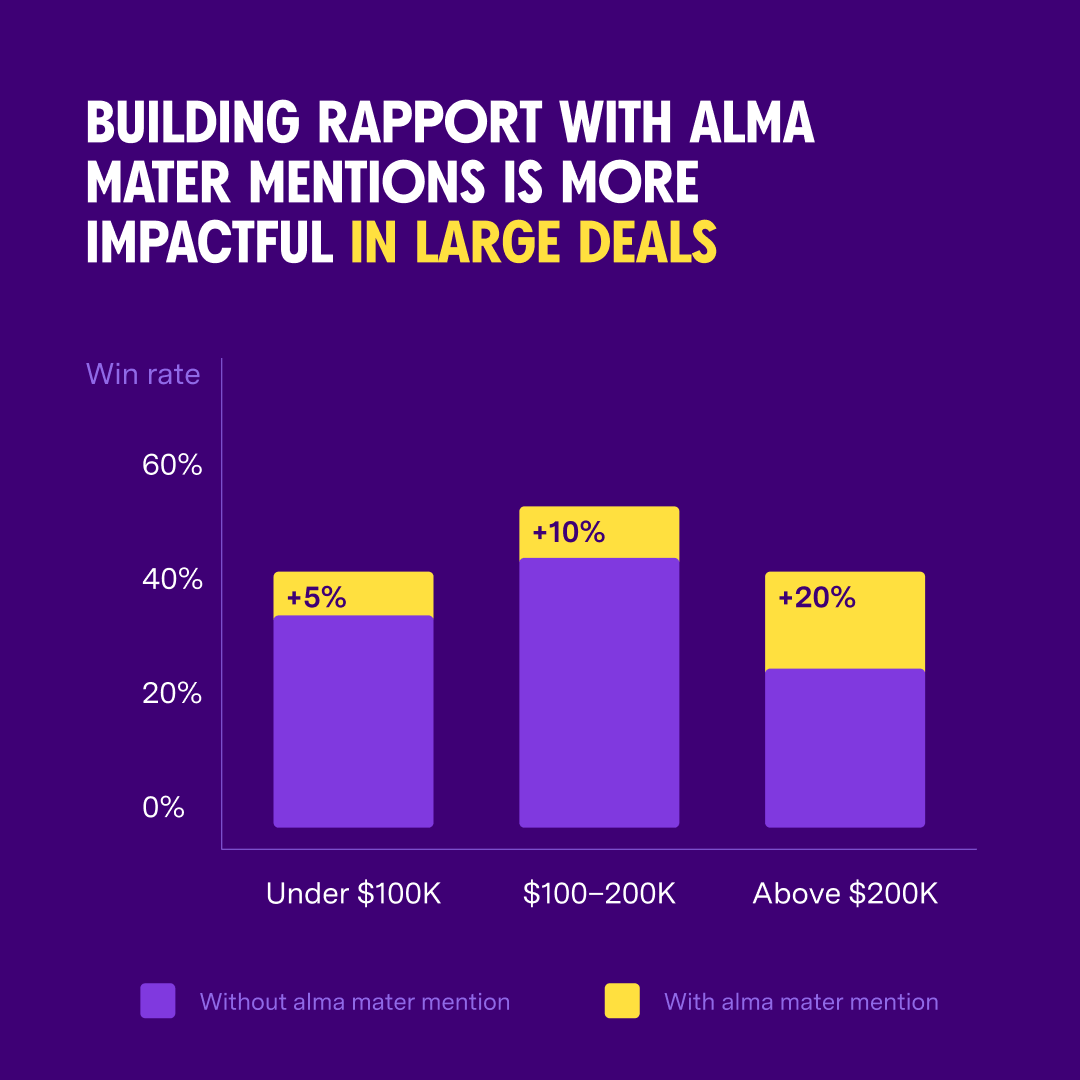 But mentioning the school you attended for 2, 4, (7!) years is not the only way to win over buyers (and increase win rates).

Other ways to build rapport with buyers

Discussing your alma matter certainly moves the needle on win rates, but what about other ways to build rapport?

We detail these 3 powerful tactics here.

While college mentions move the needle for sellers, NCAA Football is the most popular sport mentioned on sales calls.

This makes sense. After all, college football is one of the most popular sports (at least in the United States). Football (American soccer) and Cricket take the cake internationally.

However, more niche sports like skiing and golf actually have a larger impact. 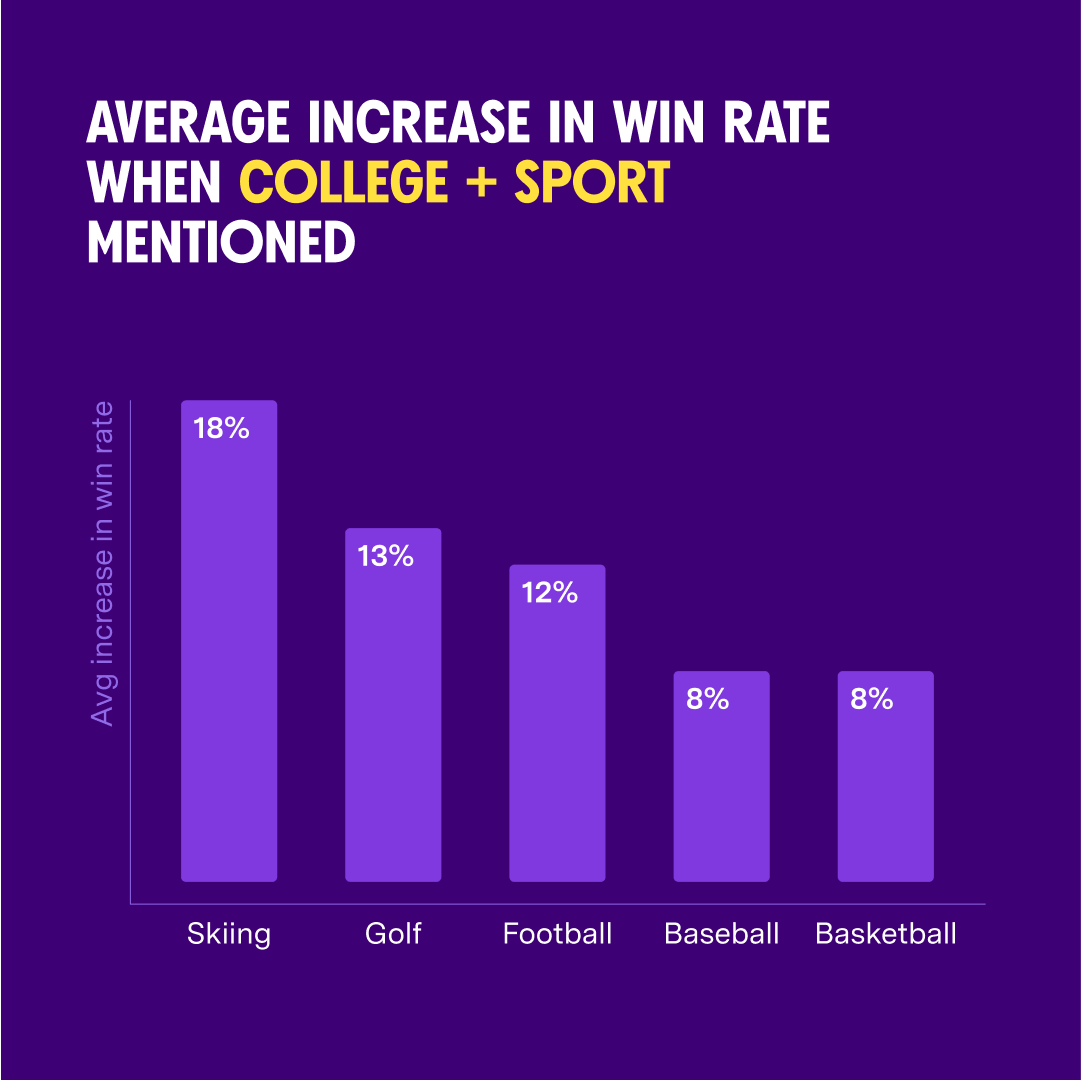 What does this all mean?

Uncovering topics where we can develop and strengthen our personal connection.

A recent LinkedIn poll we conducted asked sellers what the hardest thing was about selling virtually. Not surprising? Of the nearly 2,000 responses, the overwhelming majority (57%), said building true rapport. 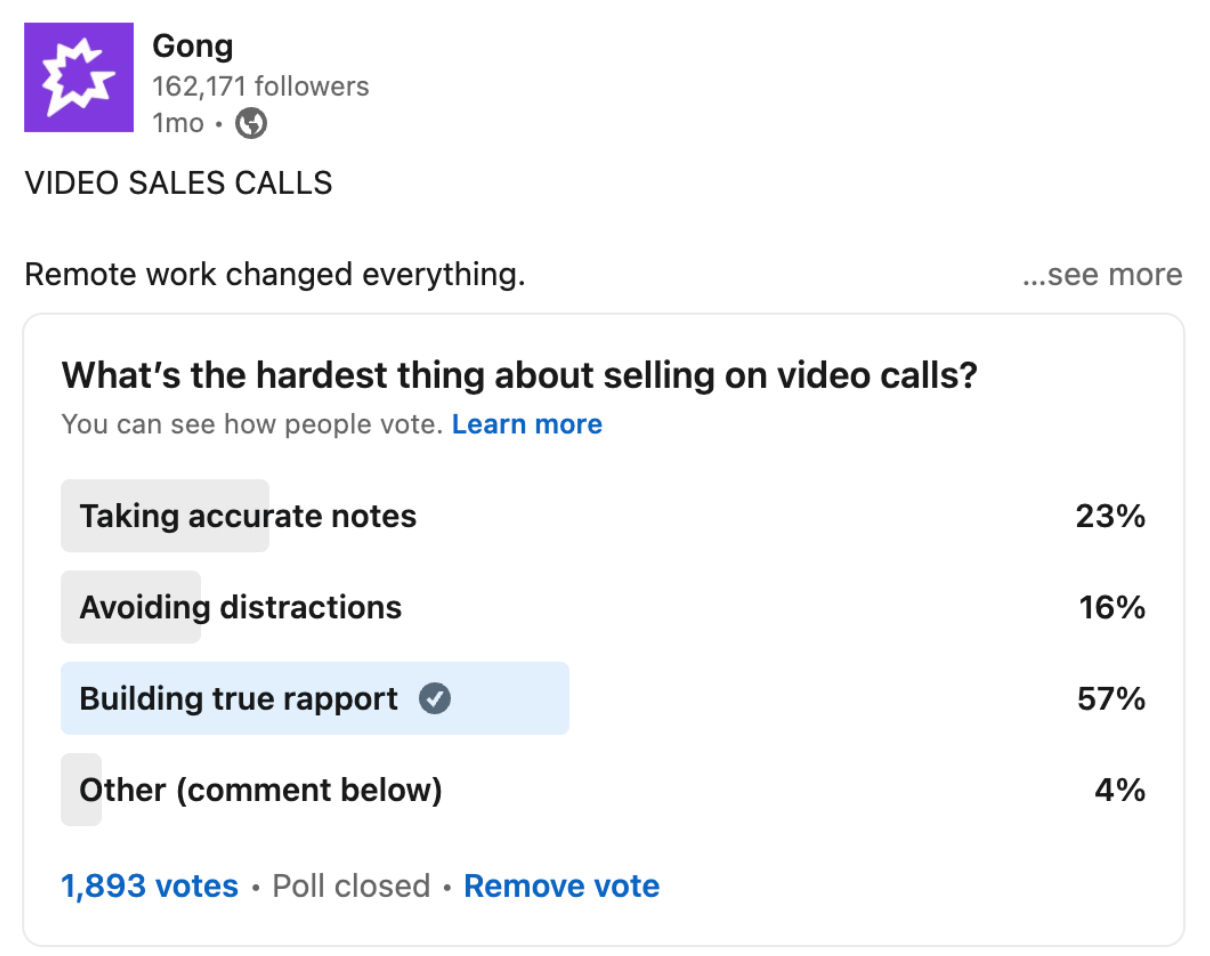 Over the next several months we’ll be identifying new topics that are backed by data and proven to work to build connections with your buyers no matter where you are. Be sure to subscribe to Gong Labs so you don’t miss them!