The question “does that make sense?” generates some strong opinions in the sales world.

Many sales pros loathe the phrase and avoid using it at all costs, while others pepper their sales calls with it religiously.

The argument against the phrase is simple: It sounds like an overused, “salesy” thing to say that you might hear used car salesmen ask.

But the assumption that asking “does that make sense?” is bad has never really been tested or verified with data.

Afterall, we salespeople may be seeing things through the lens of our own profession: We are sensitive to the use of the phrase because we’re professional salespeople.

But do our buyers care (or notice)?

We wanted to fix that lack of analysis and see if “Does that make sense” really did have a negative impact on close rates. The results had a twist of the unexpected.

We analyzed one million sales calls with machine learning to identify where the phrase “does that make sense?” was used, and correlated the phrase with sales outcomes.

These 1 million sales calls were recorded and the call transcripts were analyzed to identify patterns.

The results allowed us to answer the question: is there a positive or negative correlation with the question “Does that make sense?”, and sales success?

Here’s what we found:

“Does that make sense” Has a Slight Positive Effect

It turns out, there is actually a 14% higher likelihood of progressing a sales opportunity to the next deal stage when that phrase is used: 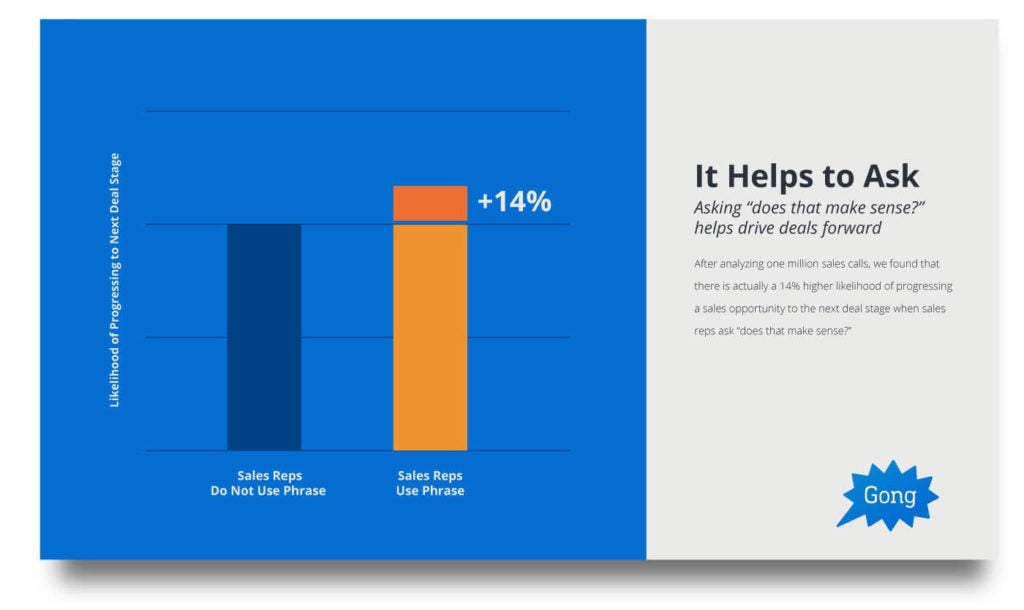 That’s right. Not only did using the phrase not tank deals or turn off buyers, it actually helped to move deals through the pipeline.

BUT — don’t change your talk track just yet.

When we looked at the effect the phrase has on close rates (not just stage-by-stage deal progression), the results were a little different.

It turns out there is no correlation between using that phrase and actually closing the deal (neither a positive or negative correlation).

While it may have a slight benefit in clarifying key points early in the sales process, it has no impact on the ultimate purchasing decision of a buyer.

HOWEVER — when we looked at the data more closely, we did find something interesting…

A Slight Twist on “Does that make sense?”

We found that superstar salespeople — those in the top 10% of the performance rungs at their company — use a very similar phrase frequently:

These top performers use this phrase to bring their prospect into the conversation and provide a sense of ownership over the call.

You can imagine the difference it makes to a prospect when they hear “Does it make sense to have a follow-up call next week? vs. “Let’s follow up on this next week. I’ll send a calendar invite.”

Superstar salespeople use this language twice as often as “average” reps, and 3x as often as “low performing reps” (those in the bottom 20% of the leaderboard): 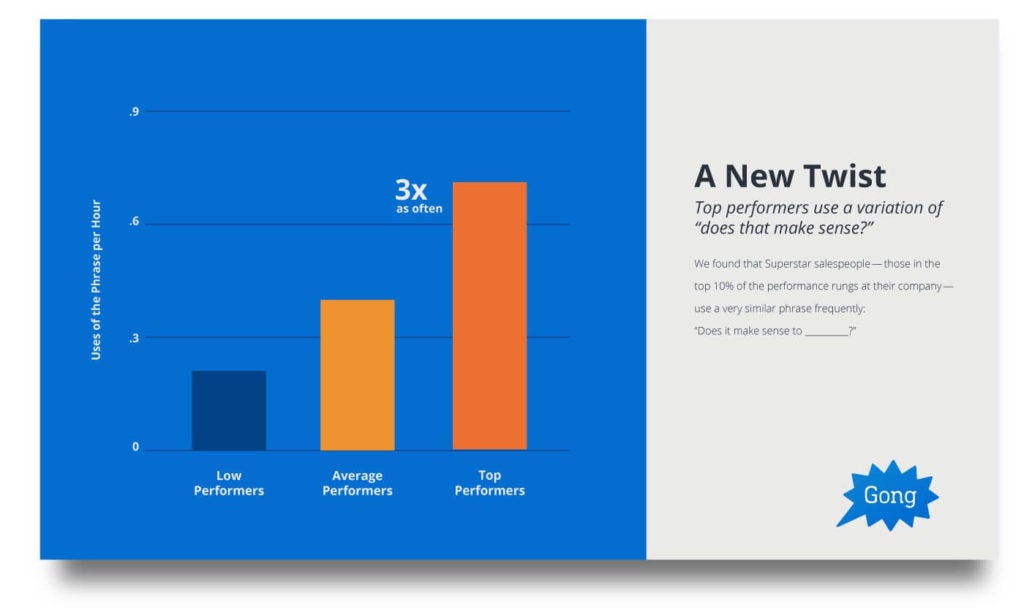 But they don’t use this closing question randomly. They ask it during very specific topics of discussion.

We found that superstars use the question “Does it make sense to ________?” most often during two specific topics of conversation: 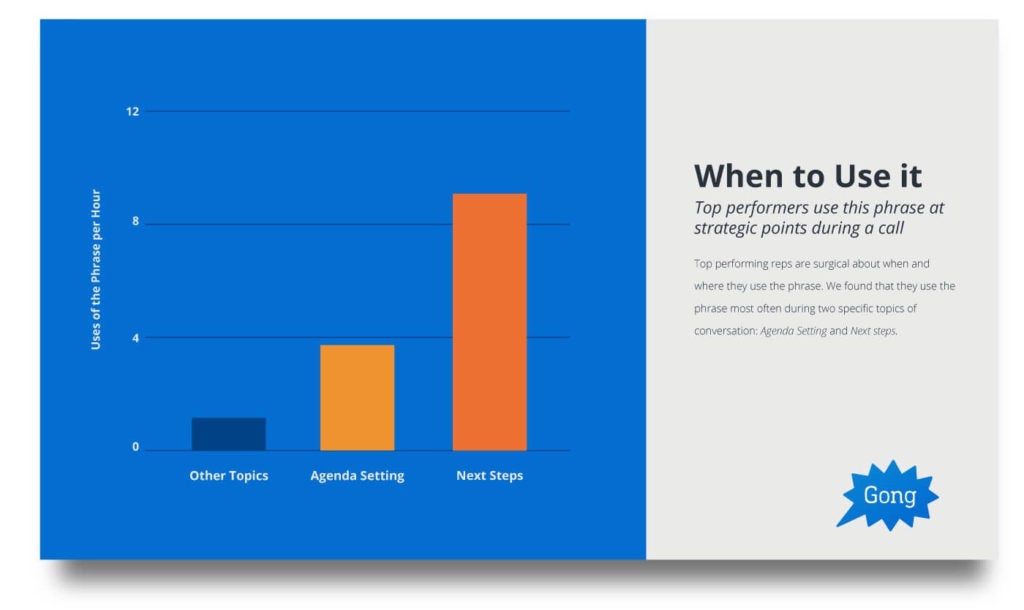 The average “occurrences per hour” during other topics for these reps is only 1.14, so you can see usage during “Agenda Setting” and “Next Steps” is way more frequent.

In other words, they most often use it as a closing question.

In both topics, the phrase provides the perfect tactic to bring the prospect into the process and give them ownership over what happens next.

The Ultimate Closing Question In Sales

So, there is no significant correlation between using the phrase “does that make sense?” and the close rates of corresponding sales deals.

But we did find the best “closing question” you can possibly use to secure a firm next step toward the end of a sales call:

“Does it make sense to [insert suggested call to action]?”

It’s what top sellers ask, and it helps them get deals across the finish line with less friction.

Try it out on your next call.

P.S. Want to run this kind of analysis on your own sales team’s calls?

Click the banner below to request a demo of Gong.io – the #1 conversation intelligence platform for sales.