I had to answer the question. What other choice did I have?

Even though they were on the other side of the US, it felt like the four people I had on the Zoom call were forming a circle around me.

And each of them wanted to know the same thing: “How is Gong different than [X competitor] and [Y competitor]?”

What a way to start a sales cycle!

This was my first call with this potential customer account, and they were already chomping at the bit to understand the differences between the three major players in our space.

With webcams on and video chat activated, all eyes were on me.

I took a deep breath, and carefully explained how we were unique compared to the competitors they were asking about:

“While the competitors you mentioned have great products, they rely on external call recordings. In other words, the account executives using their product have to manually press “record” on their conference call system each and every time.

“Gong, by contrast, automatically records, transcribes, and analyzes 100% of your sales team’s calls without relying on your reps to even lift a finger.

“Keep this in mind: Your sales reps that are in most need of coaching will never remember to manually hit the ‘record’ button.”

Even though talking about competitive differences with potential customers is usually a stressful and delicate situation, I took comfort in knowing the data: customers who mention your competitors early in the sales cycle are 49% more likely to close than those who don’t.

Let’s see what else we can learn from machine learning analysis about competitor mentions and deal success.

The answer to the question “What effect do competitor questions and mentions have on my deal outcomes?” is largely “it depends on the stage of the sales cycle.”

When your competitors are asked about or mentioned early in the sales cycle (either on prospecting calls, or the first 1-2 stages of opportunities), the odds of winning the deal actually increase.

Like I mentioned earlier in this article, when a potential customer asks about or mentions a competitor of yours early in the sales cycle, your odds of winning the deal are 49% higher than deals that are absent of competitor mentions early on.

In hindsight, this is probably because you’re dealing with an educated customer who is actively looking to make a purchase one way or another.

They’re going to buy from someone. The only uncertainty is who? 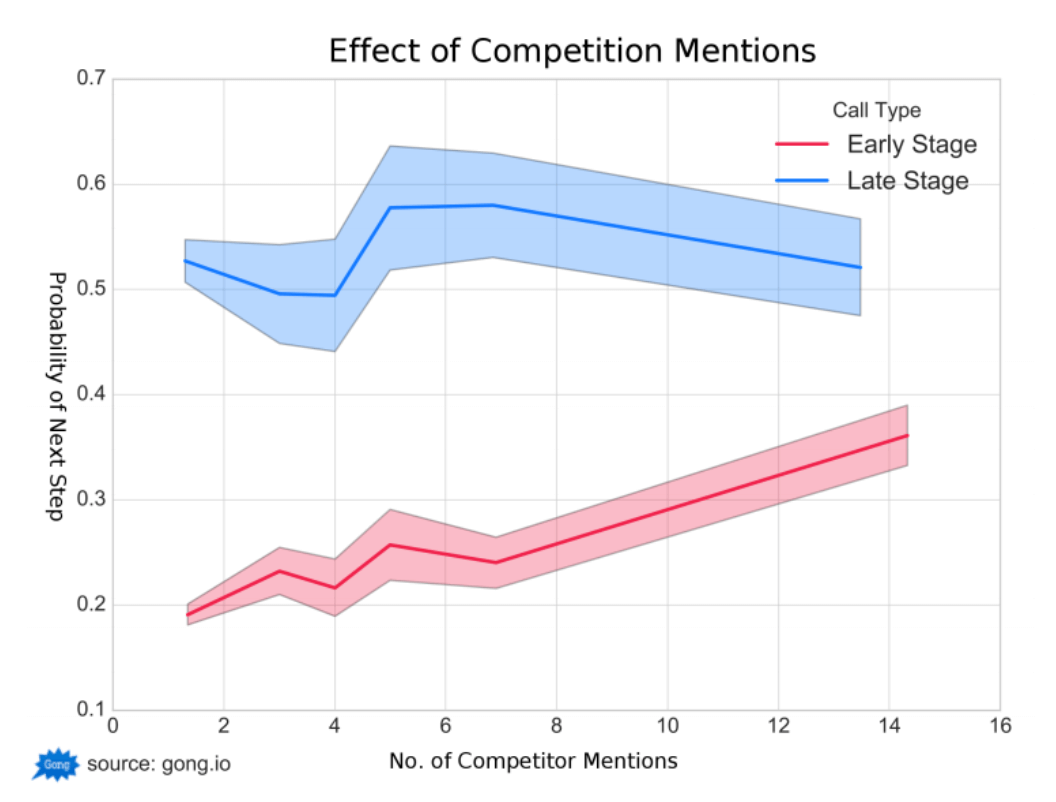 However, take a close look at the above chart.

When your competitors are asked about or mentioned mid-to-late sales cycle (during mid-to-late-stage demos, “technical evaluations,” and pricing/negotiation discussions), the odds of closing slightly decrease.

Hindsight translation: competitive deals are actually a good thing, but you have to preemptively win the competitive battle early on in the sales cycle.

Overall, the fact that your potential customer is citing your competitors is more often a good thing than a bad thing; particularly if done early on (and done less often later on).